Adapting any videogame for the tabletop is a challenge, but trying to translate the grand strategy of Europa Universalis 4 into a single board game might be in a league of its own. A sprawling videogame that has you control the fate of a nation over hundreds of years, it’s as wide as it is deep, spanning political, economic, military, and diplomatic elements in a simulation of international power struggles.

Like other Paradox titles – Hearts of Iron 4 and Crusader Kings 3 among them – it isn’t a straightforward simulation, however, but more of what’s often called a ‘historical sandbox’. Lead a nation through prosperity and downfall as real-world history plays out around you, or carve an alternate way forward that pays no heed to scholars of old. That might involve ambitiously destroying the Holy Roman Empire, or questionably raising a single city-state to greatness. It’s this fine line between historical authenticity and entertaining leniency that Europa Universalis: The Price of Power, the upcoming board game from Aegir Games, is trying to walk.

“That’s the thing, the historical sandbox,” designer Eivind Vetlesen tells Wargamer when describing the board game. “Not feeling limited in what you can do, but being able to go in any direction that you want. You can try playing a peaceful game, but you always have the insecurity of what the outside world is going to do to you.”

That feeling of choice will come partially, Vetlesen says, through the game’s scope. Described as a 4X strategy game, you’ll develop your chosen nation (from those in Western Europe) by trading with other states, growing your diplomatic ties with other players, building an economic engine, or going on the warpath. Turn to turn, that follows a fairly standard gameplay loop: draw cards to your hand and spend administrative, diplomatic, and military resources to resolve actions across the map, before passing over to the next player. 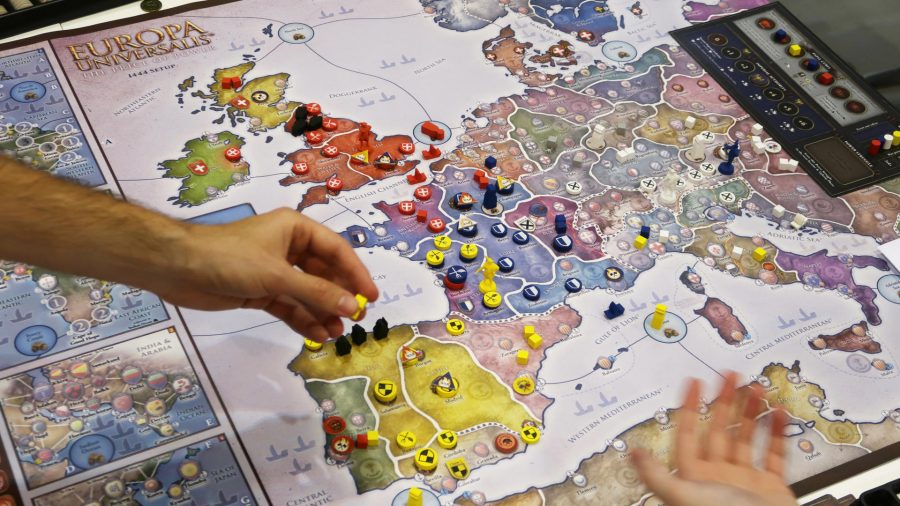 “Obviously, we can’t capture every element of Europa Universalis 4,” Vetlesen says, “but we wanted to capture what we think are the main pillars, and capture the feeling of playing the videogame.”

We wanted to capture the feeling of playing the videogame

For Vetlesen , that comes down to the concept of guiding a country through history. He wants players to be so immersed that even those who follow a totally ahistorical path will feel as if the events of the game could have happened. With every nation’s starting position and power relations pre-determined, and regular events cropping up to hamper or bolster your development, the idea is to inject just enough historical direction in the game to complement, rather than dominate, player choice. 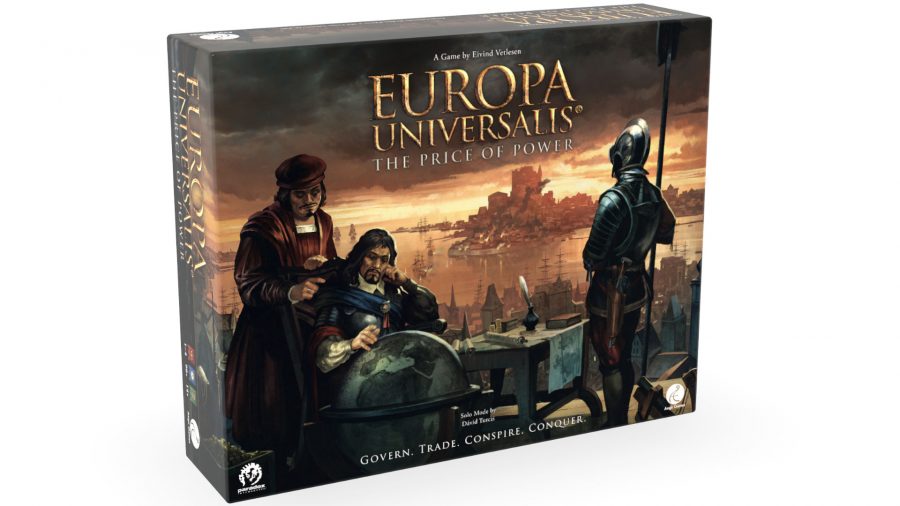 “So that definitely makes it different from a game like Twilight Imperium,” Vetlesen adds, “Comparing it to historical games that track a long time period, like Civilisation or any of those civ builders, this has a lot more detail, a lot more of that historical context. Each and every one of the events that appear in the game has some basis in history. Even realms that were exterminated before the end of that time period, we still found stuff in history that relates to the area where those realms resided.”

In typical sandbox format, The Price of Power also hands players the means of creating their own history. As with the original videogame, every nation has its own ‘mission tree’ for players to progress through, rewarding you with additional resources and boons for achieving specific economic objectives, establishing particular cultural milestones, or unifying states into new nations.

Cardboard general: These are the best strategy board games

For larger nations, the pre-written mission decks are simply another way of encouraging, but not stipulating, the direction of your country’s growth. They offer historically accurate paths of development, as well as alt-history scenarios to experiment with. For smaller nations, however, you can start from scratch, and build history to your liking.

“We haven’t tailor-made [mission decks] for all nations, but we have a bunch of generic mission cards, so you can make your own,” Vetlesen says. “The mission cards are made in a way that [lets] you build your own tree. They relate to each other, so you can build a mission deck that has different paths to follow.” 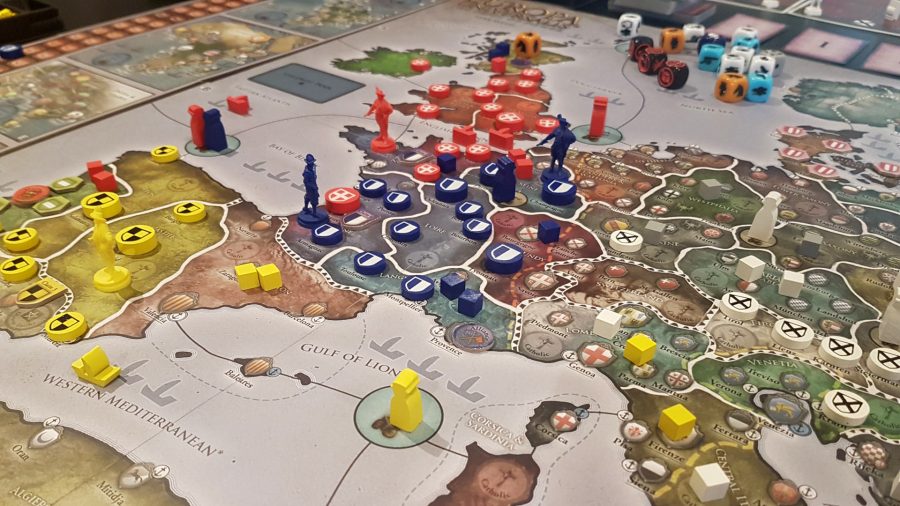 The idea is to not only provide a way of playing any nation on the game’s map, but open up those nations to experimentation. You can choose to play a tiny principality in Central Europe that’s long been forgotten to obscure university textbooks, and carefully craft a mission deck that cleverly exploits its starting geopolitical circumstances to lead it to political domination. You’ll not only choose what your nation does, but will set down the very path it follows before the game’s first turn has even begun.

There are, of course, restrictions. As Vetlesen promptly points out, the board game format doesn’t allow for the level of micromanagement found in the Europa Universalis videogames, limiting its scope of detail as well as the historical differentials it can simulate. From a gameplay perspective, too, there’s also the issue of victory. While most Europa Universalis 4 players will rarely see a campaign through to the end, which could take as many hours or weeks as they like, such open-ended design wasn’t a possibility here.

“This is a victory point game,” Vetlesen says, “which sets it apart from the videogame in which there’s no official winner. We’ve introduced a prestige system, which you score by completing your missions. You’ll also be scoring points for researching ideas as well, and there’s some points to be scored from the events in the game. Then, in the final scoring phase, you will also score points for your tax income, so basically, the extent of your realm.” 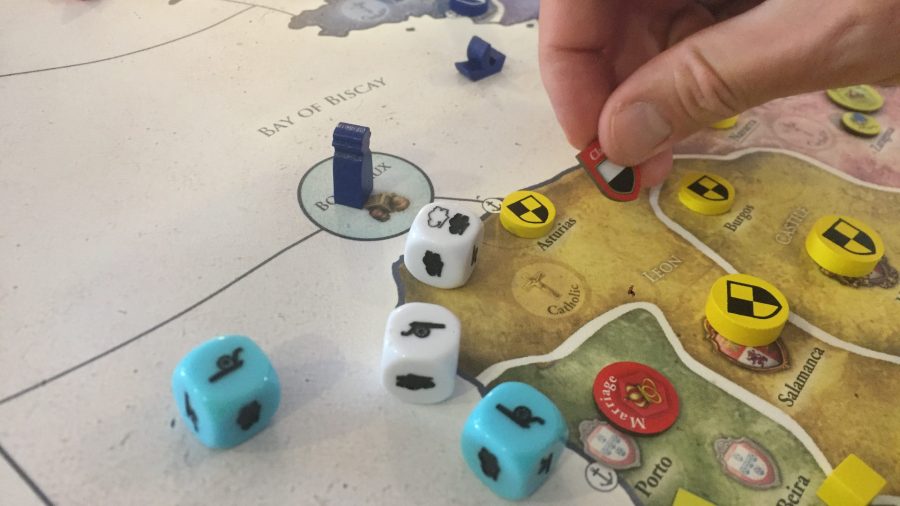 While introducing a win condition might alter the game’s sandbox feel, The Price of Power is, rather unsurprisingly, not a short game. Sessions can span anything between one to four ‘ages’; play all four, and you’ll be taken from 1444 through to the Napoleonic Wars of 1821. If you’re playing with the maximum six players, expect a “full day of gaming” according to Vetlesen, although playing individual ages – or one of the included scenarios – will take closer to a few hours.

“You can construct event decks, make custom scenarios, and play however you want to play, which is again a bit of the sandbox that you have from the videogame,” Vetlesen says. “So even if it’s a historical setting, it’s got huge amounts of replayability. You can play as so many different nations, which have very different starting points and very different trajectories.”

Europa Universalis: The Price of Power is scheduled to ship next year to its 2019 Kickstarter backers before receiving a retail release.

{"schema":{"page":{"content":{"headline":"How the Europa Universalis board game is making a historical sandbox on the tabletop","type":"guide","category":"europa-universalis-the-price-of-power"},"user":{"loginstatus":false},"game":{"publisher":"","genre":"Strategy","title":"Europa Universalis: The Price of Power","genres":["Strategy","Historical","Board game"]}}}}