All of a sudden, I want a crossbow for Christmas. Slitherine has just announced that Field of Glory II: Medieval (FOG2M) will drop on  February 4,  2021. Given the press code becomes available this week, and I’ve been busy cleaving heads in the Beta for the past several weeks, believe it or not, I have thoughts.

FOG2M is really the computer version of miniature wargaming legend Richard Bodley Scott’s Oath of Fealty army list and companion to FOG tabletop. Both book and computer game cover the Feudal era from 1040 – 1270 AD, but this time the latter is a new stand-alone game and not another FOG2 DLC. Evidently, adjusting the original game’s hyper-important POA (Points of Advantage) structure to account for the oddities and nuances of armored knights kerflumping about was far more difficult and less realistic than simply producing a new base game. So, no, you cannot throw Trajan-era Romans against the Teutonic Knights, but I think most folks can live with that.

Because this is a ‘first look’ article, I will be concentrating on how the game plays. Yes, there are some significant changes in graphics and user interface, and if you want to learn more about the factions and campaigns involved, you can visit our earlier article on the subject for details. Suffice it to say there is not a caltrop’s worth of difference in the procedures needed to play the game when compared to the original FOG2.

How one uses these strictures for battlefield play is something else, so let’s talk turkey (Please stop-ED). 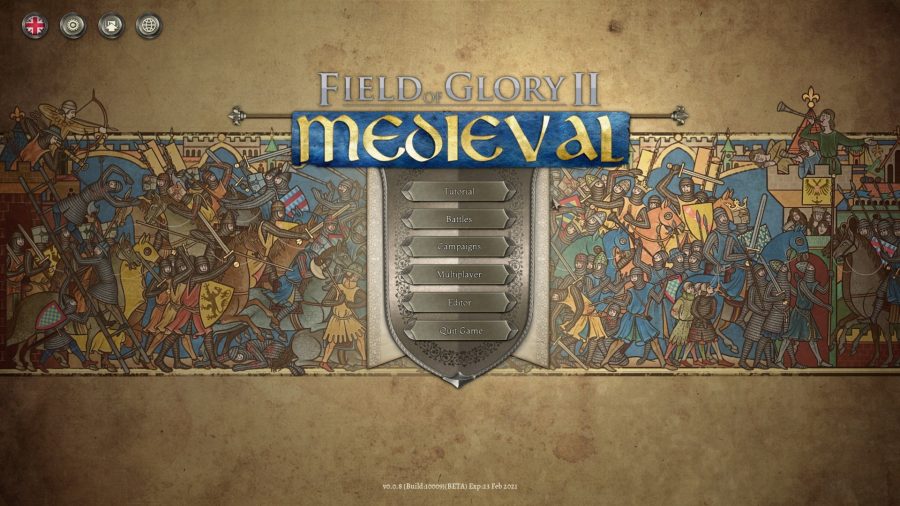 For me, it’s all about the battles so that was what I’ve been doing these last few weeks. I played a host of the new historical Epic Battles (save Hastings and Lake Peipus, because they’re so famous) and a few custom battles I’ve created. I always choose the biggest armies and the biggest pieces of real estate available, something that reminded me FOG2M is a very scalable game.

If you know nothing about the historic battles, grab a book or visit wikipedia before playing

While the manual does indicate a nominal soldier scale of 60 men per figure and 60 yards per square, this can change depending upon whether the battle is very small or very large. For example, in the gargantuan custom battles I play a square of four mounted knights might well represent 480 men, or 120 men per figure. This means that one square of soldiers in this game does not always translate into one stand of lead on the tabletop and does help explain why the casualty counts are often so different from one battle to the next.

Also, word to the wise about the Epic engagements. If you know nothing about the historical battle, grab a book or at least consult Wikipedia before you play. The game’s historical backgrounds for each battle are worded differently depending upon which side you take. This means in battles like Kressenbrunn 1260 or Kalka River 1223 (featuring my favorite army, the Kievan Rus, because the flags look neat) you could be in for a nasty surprise from turn one. 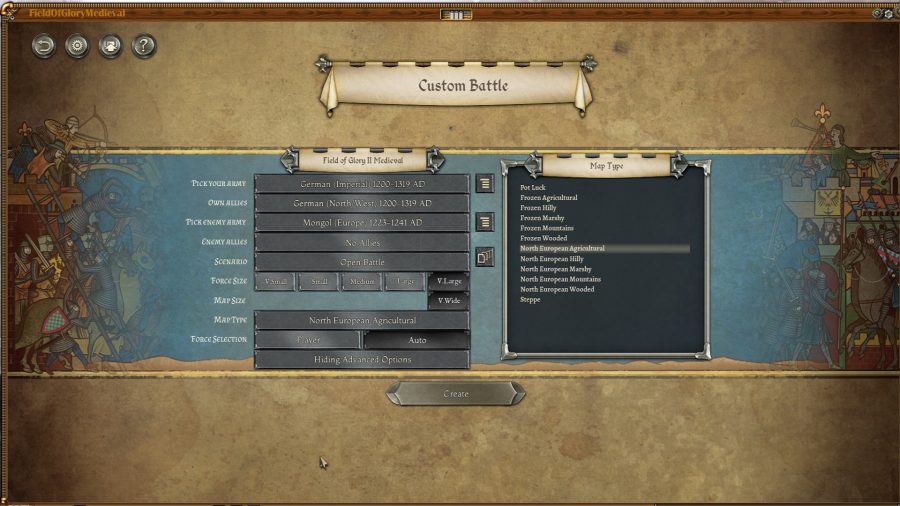 Overall, however, the theme of this game is absolute brute force, principally in the form of mounted, armored knights and their retainers, or dismounted armored knights and sergeants. These lads hit hard, very hard, but nimbleness is not in anyone’s dictionary, even if they could read and most could not.

There are a couple of reasons for this, the first being that mounted units are simply slow regardless of type. Here you are talking three squares straight ahead. For the Mongol equivalent of knights, the movement is four and Mongol light cavalry can advance five. Foot movement seems universal with two squares per turn straight ahead over clear ground.

See the pennants waving: These are the best medieval games

But to add salt to the wound, outside the Mongols (notice this is the second time we’ve mentioned them) everyone else is tagged as Undrilled and Unmaneuverable. The penalty here is that the automatic, free 45 degree turn you’ve seen for foot and horse in other FOG games is gone. Looking at something like a later Holy Roman Empire army, I could not find a single unit that was not Unmaneuverable. This seems to cause the game to break down into a chainmail barroom brawl much more quickly than other sets in the product line.

Given I’m the type of guy who likes to forego gaming technique for historical purposes, keeping prim and proper battlelines supporting each other no matter what, having this option yanked by the nature of gameplay did not make me happy. In the thick of combat, it was also extremely difficult to launch a supporting attack into the flank of an adversary simply because I did not have that free turn to make. 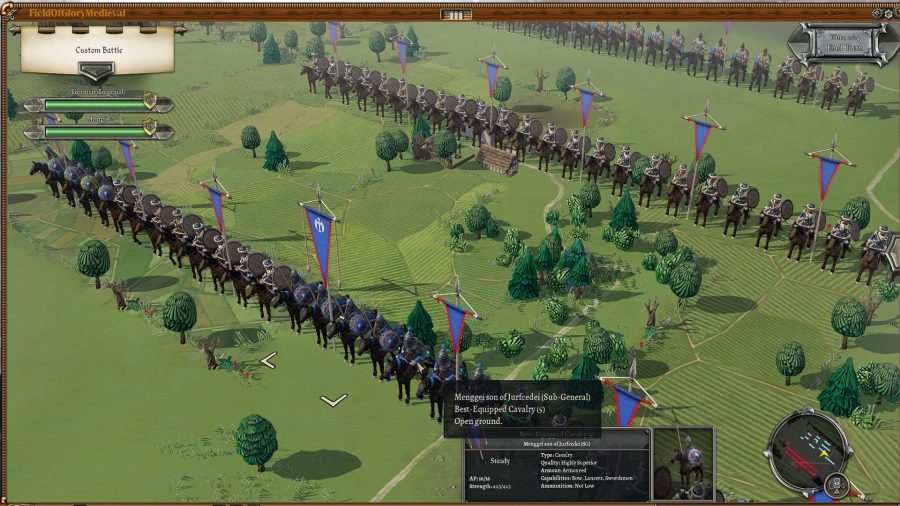 Mongol armies do not have that Unmaneuverable tag, however. There is no infantry, though along with moving in/out of squares there is a new Dismount order in the game, but that doesn’t matter an awful lot. Everybody can spin and move, most are triple armed, and the Mongol heavy, armored cavalry can not only go toe to toe with Medieval knights any time, any place, but they can also evade.

Can you imagine a bunch of Teutonic Knight formations being able to evade? Well, I can’t either, but it would help if Christian knights (especially when accompanied by the King) could make up that deficiency by not pursuing off the table and return sometime before the New Year if they do.

Like the Mongols do, but they don’t. And this is why the horsemen from the steppes get my vote as the badass army for FOG2M, so…

Scientia potentia est, and fully armoured by such information I decided the ultimate test for FOG2M was to throw Europe’s finest against the heathen Mongol invaders at the behest of His Most Catholic Majesty, the Holy Roman Emperor using the 1200 – 1319 army list. Believe it or not, this is not far fetched. History records Mongols knocking on the door of the Margrave of Brandenburg in 1341 and burning the Saxon city of Meissen to the ground previously in 1241. I built the battle with the largest armies available, both auto-built and auto-deployed, on the biggest map the computer would allow, using the North German Agricultural type, as in flat fields with little obstructing terrain. 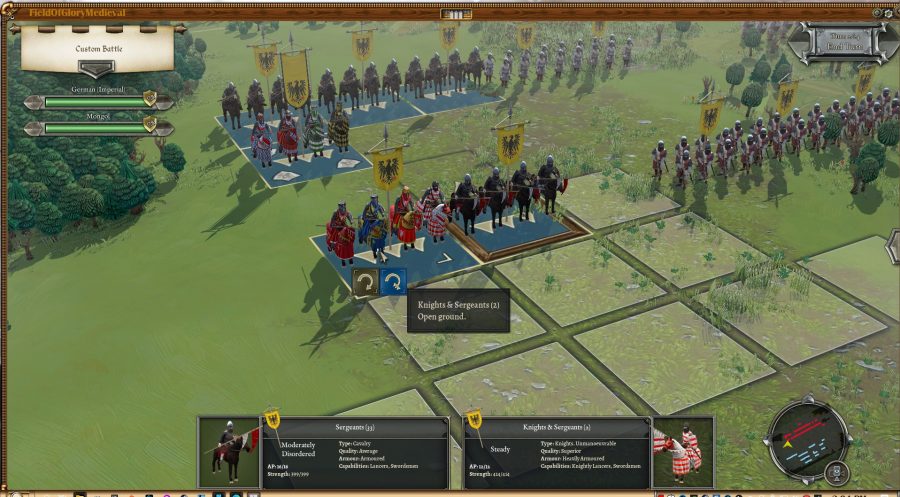 OK, I know what you’re thinking. You faced a Mongol horde on flat, open ground with an infantry heavy Feudal army? Don’t judge me as there was a lot of holiday eggnog involved and I was feeling… brave.

The game lasted 18 of 24 turns, the first two of which saw the Mongols sit on their haunches

This game lasted 18 of 24 turns, the first two seeing the cowardly Mongols sit on their haunches and do absolutely nothing. Cowards they are I declared, and on turn three I decided to advance and give these churls the good shellacking they deserved. Thus, with the one true cross by my side I pointed towards the enemy.

And I died. With my infantry and dismounted knights in the center, all cavalry on the wings, I advanced straight ahead. The Mongols completely abandoned the center of their line save for a single Trebuchet unit, which always seems to show up for some reason. Easy pickings, to be sure, but moving at two squares max each turn, the wily AI knew it would be difficult to reach this infernal war machine even if undefended. 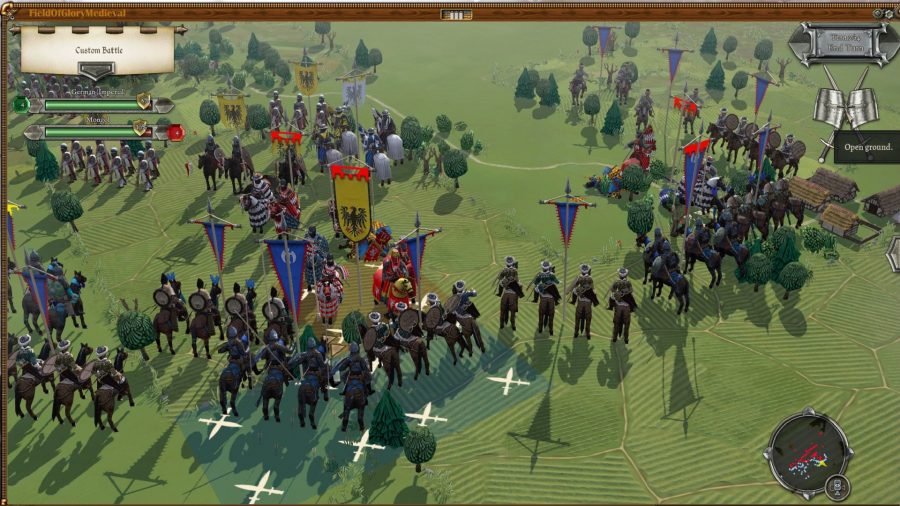 Instead, the Mongol horse from the centre joined their comrades on the wings and proceeded to shoot me silly, evading every time I advanced to take them in close combat. Their best equipped armoured heavy cavalry was particularly obnoxious, because only my mounted knights and sergeants could compete with them. When my knights charged, they evaded and my knights just kept on going, running down every gopher and groundhog they could trample, until the edge of the board did NOT stop them. And while every Mongol on the board had an honour diploma from advanced archery school, most of my foot were defensive spearmen.

The castle library: These are the best medieval warfare books

Only when individual Imperial units had been attritted and isolated did the horse lords charge, and the loss of that free 45-degree spin made it very difficult for Imperial counterattacks to occur on engaged units. When my wings collapsed, the Mongols returned to the centre and began to carve up my infantry like pastrami from an Italian deli, same technique, same results. By turn 18 I decided to let these barbarians off the hook and withdrew, suffering 60% casualties to the Mongols 29%. From start to finish, the game took a little over two and a half hours.

The Holy Roman Emperor was not amused. 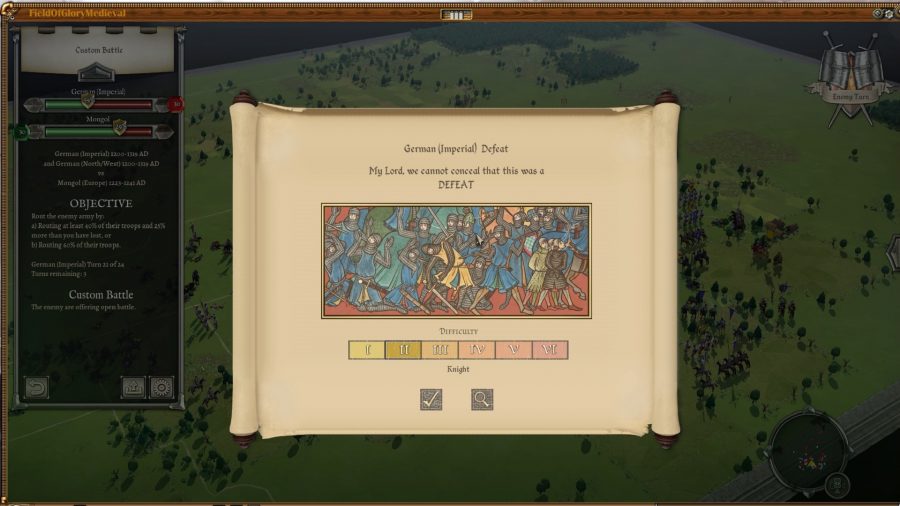 A PEACE IS CALLED

So how good is this game? History tells us that Mongol incursions into Europe had a direct impact on the development of what is collectively known as ‘Feudalism’. Like most of the armies in FOG2M, the mounted component was far smaller in European armies than would be the case in later years.

I’m going back to request a rematch from Batu Khan

But after continuously getting spanked by Batu Khan and the lads, more castles were built and the amount of cavalry in military service was increased, with better training and equipment as well. Given Medieval kingdoms in the West did not have the central infrastructure and money to stable and maintain large amounts of mounted warriors during peace, the next best solution was to provide titles and lands to reliable soldiers in return for them providing the necessary military horse flesh to counter armies from Asia. This was Feudalism.

All of the battles I played pretty much validate this perspective, but the one above does so clearly, simply and with an awful lot of fun. So much so that the opening screen of the game is going to be my new computer desktop image after the holidays. And further, I’m going back and requesting a rematch from the Khan. This time, however, the arena will be heavily wooded, and my team is going to field every crossbowman I can pay, conscript or kidnap in Europe.

Field of Glory II: Medieval is due out on February 4, 2021 on PC via Steam and direct via the Slitherine store.