One learns a great deal about oneself in the shower. It was there the thought struck me: “damn, Hearts of Iron 4: No Step Back doesn’t go far enough with the purges.” I was faced with the unique situation of complaining in great detail about how I’m not forced to purge all competent Soviet Marshals a few years into a playthrough with Hearts of Iron 4’s new DLC.

I’m not sure what to say, other than to assure you, dear reader, that my only competent Field Marshals were, in fact, all shot just in time for the German invasion, leaving me with a duo of Stalin’s most highly decorated drinking buddies to command the deadliest war in human history.

There is something truly Soviet about No Step Back. Its soaring ambition is matched only by its deep, deep flaws. Customisable Officer Corps! Custom tank designer! Mega-Soviet focus tree! Trains! This is the DLC to end all Hearts of Iron 4 DLC.

Its scope matches the front it seeks to perfect – the Eastern Front of WWII – even by itself the largest war ever fought. A titanic struggle of villain against villain. 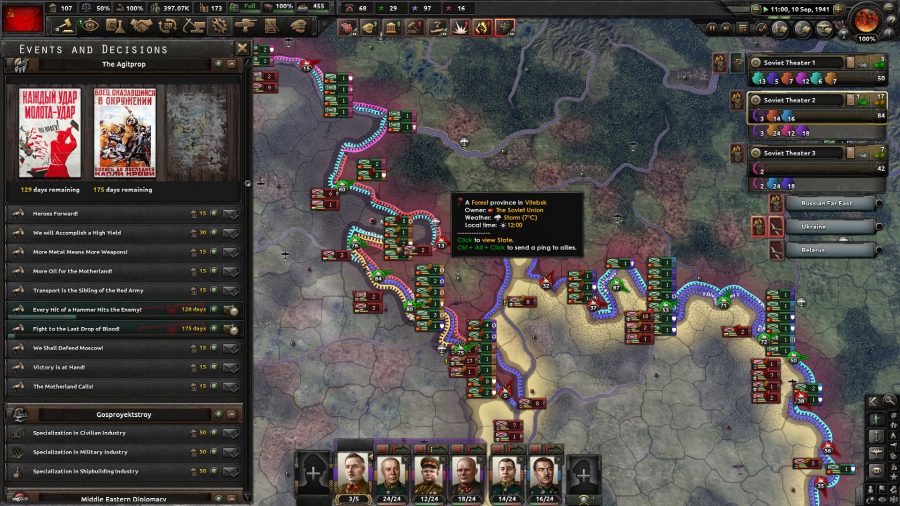 For me, there is no more fascinating period than what took place in Eastern Europe between 1941 and 1945. I’ve been waiting for this DLC since Hearts of Iron 4 first released and, by god, I’ve wanted No Step Back to be worth the wait.

No Step Back makes HoI4 bigger still - and better too

I remember playing Hearts of Iron 4 on the night of its release. I completed a game disturbingly quickly – less than six hours from 1936 to Germany and Japan defeated in 1944. These days, (even before getting hold of No Step Back), there’s so much happening in so many different areas that, in the same stretch of real-world playing time, I might not even get to the beginning of the war. No Step Back has only made the experience bigger still and, honestly, HoI4 is better for it. 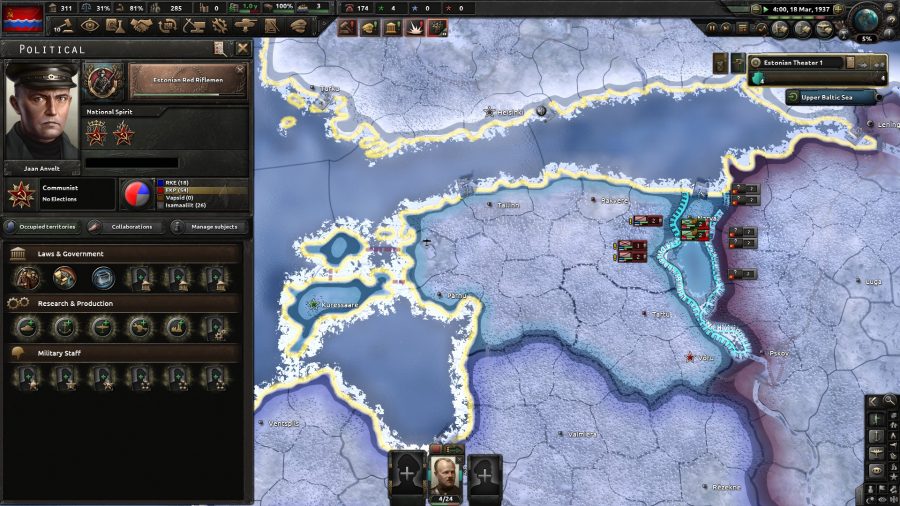 Nowhere else has the experience been expanded more than the Soviet Union. Purges, communist factions, monarchists, and fascists – it’s all there, and a massive improvement over the old Soviets. It was high time the game’s previous mechanics – which seemed to justify Stalin’s purges – went by the board.

Switch it up: The best Hearts of Iron 4 mods available

The new system leaves you managing Stalin’s paranoia in a way all too familiar to people who’ve had to work from home with small children during lockdown. The only difference is that, instead of organising the payroll or answering phones while dealing with their demands, you’re trying to modernise the entire Soviet state. 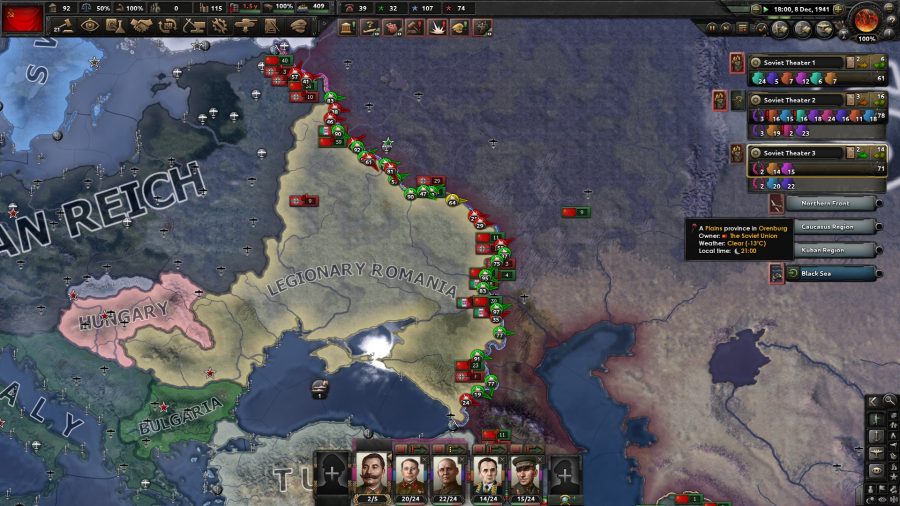 With so much to do, I am left both impressed, and concerned that too much has been forced into a period that will only span three to four years.

The great thing about Paradox games is that, while people can, and do, go really hard on a specific set of actions, there’s plenty of room to just immerse yourself in the experience, go with the flow and see what happens. I’m not so certain that is possible with the Reds. Exciting as the focus tree is, so much is linked together that – especially on a first playthrough – it’s easy to lock yourself out of certain options, or spend resources doing things that the focus tree does for you for free.

As interesting as some of the alternate history focuses are, a historically plausible playthrough of the Soviet Union feels less like a game, and more like a build order. 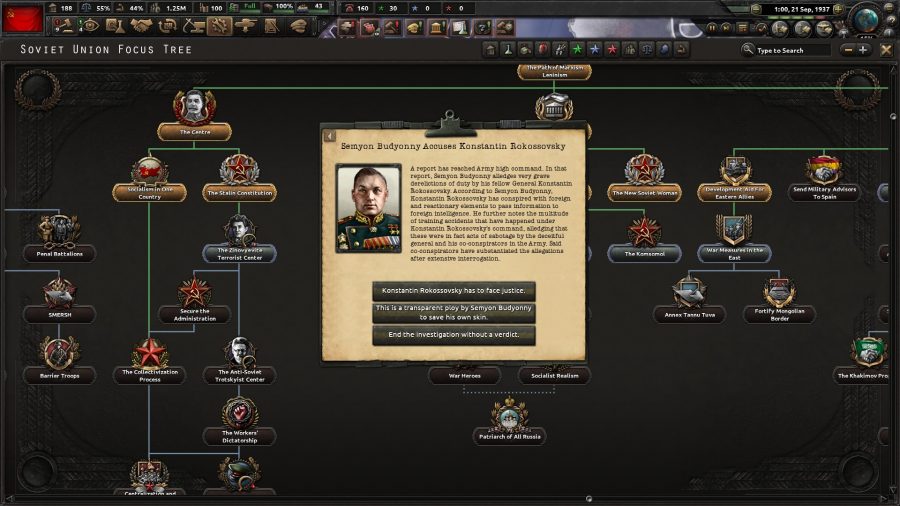 As Karl Marx certainly didn’t say, “a spectre is haunting Hearts of Iron 4 – the spectre of complexity for complexity’s sake.” The Soviet experience is one problem, with interfaces not quite able to cope with the amount of stuff plugged into them.

The all-new and exciting railways are another. Basic railway gameplay is part of the patch all players receive, but is expanded upon with railway guns in the DLC. For all the effort and extra clicks required of the player – with supply bases and the like – it yields just the same results as the old supply system.

Full catalogue: Our guide to the best Hearts of Iron 4 DLC

Something is very wrong when the Germans can solve all their supply problems on the way to Moscow by having one factory building trains.

As their panzers overran my historically accurate (read: incompetently led) Red Army, I switched sides to see that the Germans were using barely a quarter of their railway and truck capacity across a continent-sized warfront. Exciting as these mechanics are, one is forced to ask: ‘what’s the point?’ 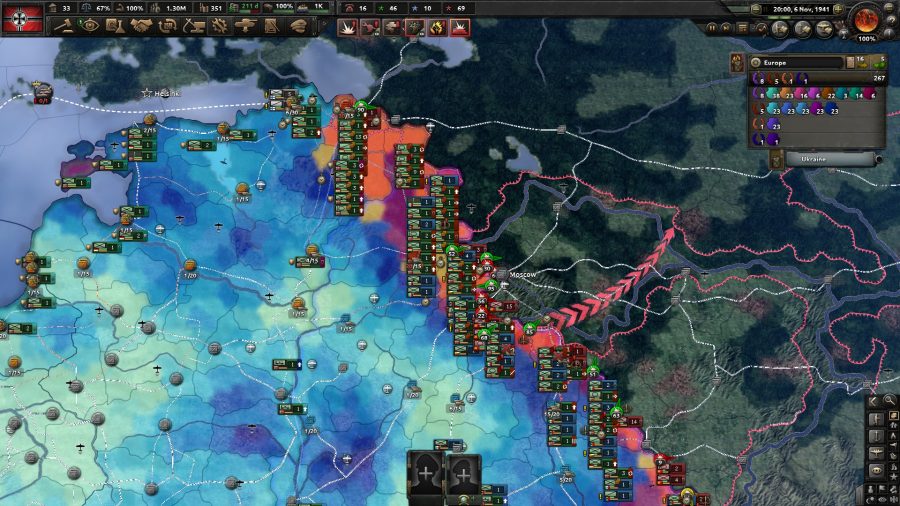 Ironically, the new features of land warfare march the other way – toward depressing shallowness. The new officer corps system adds a nice bit of colour, but feels lacklustre compared to the large doctrine and commander traits trees that the game has had for some time now.

The much-requested tank designer is similarly limp. I never felt forced to make sacrifices using it. If I want a medium tank, I get the medium tank gun, end of story. Spend a bit more army experience and the diesel engine of my dreams is there. Of course I don’t want riveted armour, I’ve read about the M3 Lee. 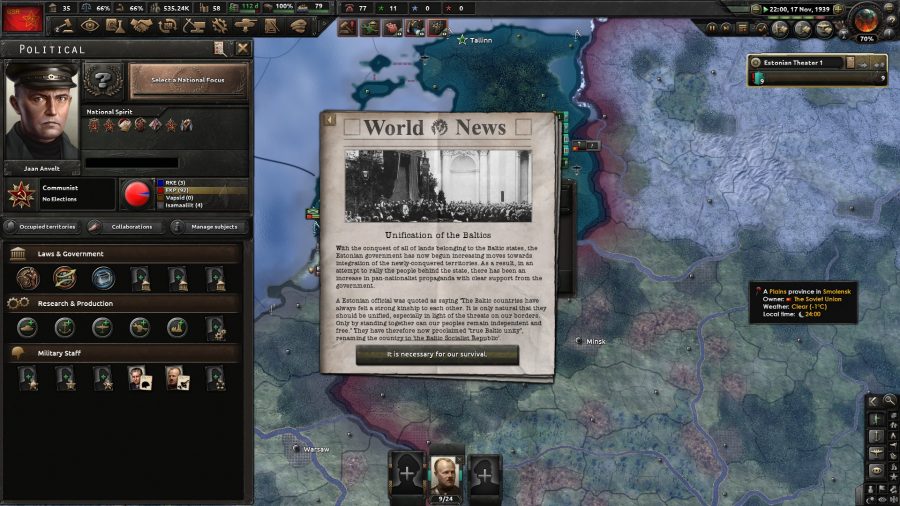 Could the system benefit from more complexity? Doubtful. Not having to worry about that stuff gives me more time to squeeze a few more military factories in somewhere, or direct divisions.

Tip the scales: Our guide to Hearts of Iron 4 cheats

But then, why bother with the tank designer in the first place? When you’re including features like this in a paid DLC, they need to be in some way inspired. I’m looking for the inspiration here and all I’m coming up with is ‘shrug’. 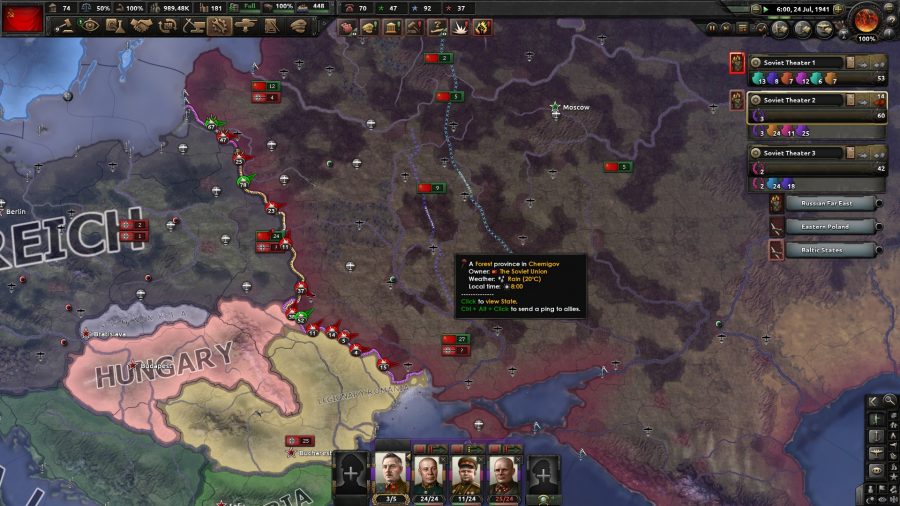 There’s so much happening in No Step Back. The Soviet Union it gives you is now probably the most interesting nation to play in Hearts of Iron 4.

The new Soviet systems have so much potential for other nations

The new Soviet-specific systems have so much potential, and deserve to be added to other nations. A system for managing Hitler’s unbearable table talk, drug addiction, and mania for micromanagement would be most welcome. But, like the Soviet Union in real life, No Step Back has to contend with the cold realities of the temperamental game it’s built upon. You’re left always thinking: ‘this is good, but if only it were done better’. 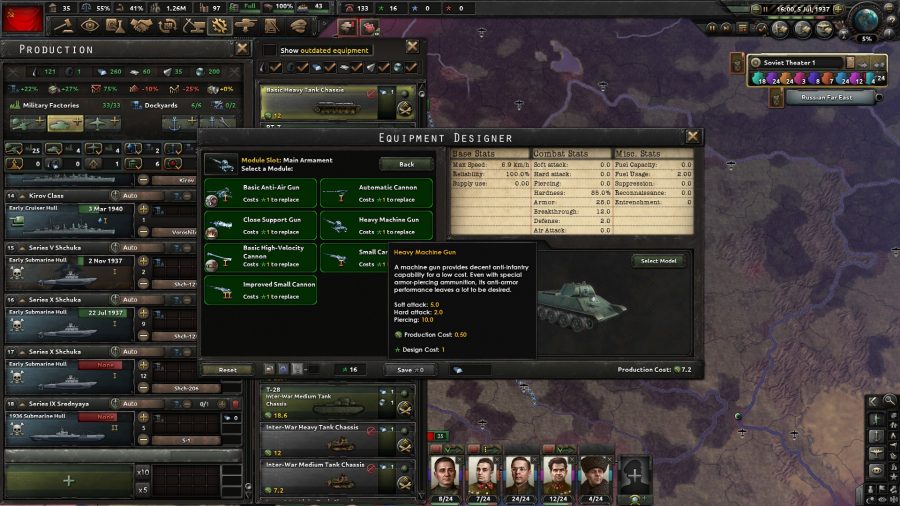 If you’re a keen USSR player, get this DLC; you’ll have a good time. The Eastern Front has never been better in Hearts of Iron 4. Fighting on despite poor equipment and incompetent leadership was gripping, for all my complaints. Ditto Baltic states fans.

Finnish fans, meanwhile, will have to wait, as unaccountably the David to the Soviet Union’s Goliath did not receive its own focus tree. For the rest, the new features come under the category of ‘nice to have’.

Hearts of Iron 4: No Step Back

Paradox aims high and occasionally gets to the stars with No Step Back – but it cannot escape the reality on the ground.