The time has come. You can resist the allure of gorgeous graphics and stunning cockpits no more. The chance to pilot historically-reverent aircraft and unleash your inner flying-ace has grown too strong. It’s time to take the plunge with IL-2 Sturmovik: Battle of Stalingrad.

But where to begin? There’s so much to a modern combat flight sim that the prospect of stepping into its digital cockpit can appear more confusing than exhilarating. For the neophyte, the sheer scope of mechanical elements that make up these simulators can be overwhelming. Even for aircraft gurus who could identify a Messerschmitt from a mile away, piloting one of these beasts is a different story.

But worry no longer, for this guide will lay down the basics. We’ll walk you through how to set up, what you’ll need to play, successfully making it through your first flight, and – with practice – how to shoot down any enemy combatant that might challenge your aerial authority. You’ll come away with an appreciation of IL-2 Sturmovik’s breadth, and a damn good understanding of how to take to the skies.

It is the nature of flight sims these days to offer not one, but dozens of possible entry points to choose from. Luckily, with Battle of Stalingrad, we can narrow things down a great deal. These days, IL-2: Battle of Stalingrad is one of many individual ‘games’ beneath the umbrella of the IL-2: Great Battles series. Each individual game comes with its own map and self-contained set of bombers and fighters. You only have to buy one of these packages to have a ‘complete’ experience, using the eight aircraft of that module. From 1941 to 1945, from Crimea to Normandy, there’s a lot to choose from. 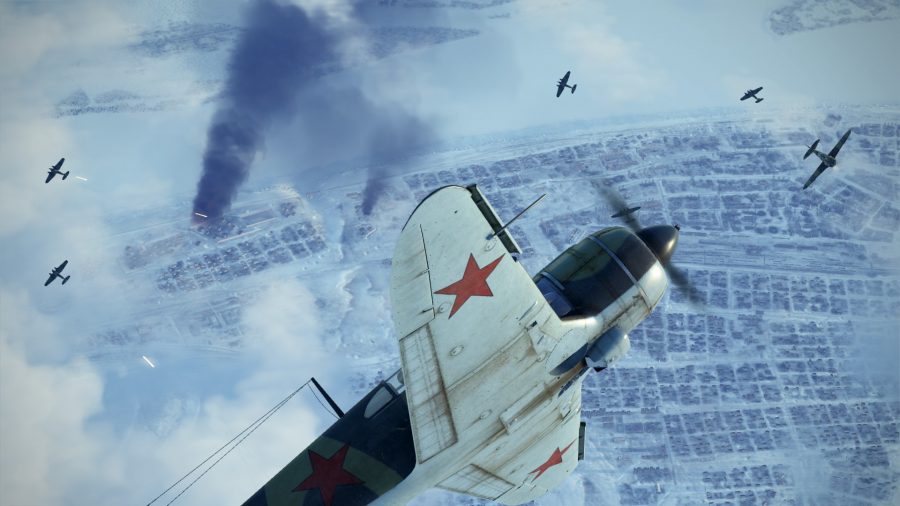 If you’re struggling to pick one, the easiest advice I can give is to pick the one with your favourite aircraft – even if it’s infamous as a widowmaker! Learning the game’s ins and outs is just easier in an aircraft you like. For myself, if I were coming into IL-2 now, I’d buy the new Battle of Bodenplatte module for the Hawker Tempest. It’s hard to go wrong with an aircraft that powerful.

If you’re still torn, my recommendation would be to go for the original Battle of Stalingrad module. Firstly, as the oldest module, you can often get it cheap on sale. Secondly, being placed almost exactly in the middle of the four-year period IL-2 covers, the aircraft Battle of Stalingrad offers will be usable in almost all settings. This is particularly important in multiplayer. A P-39 or Messerschmitt 262 are unlikely to appear in a scenario covering Moscow in 1941. Meanwhile, Battle of Stalingrad’s included Heinkel 111 is almost guaranteed to appear in missions set throughout the war. 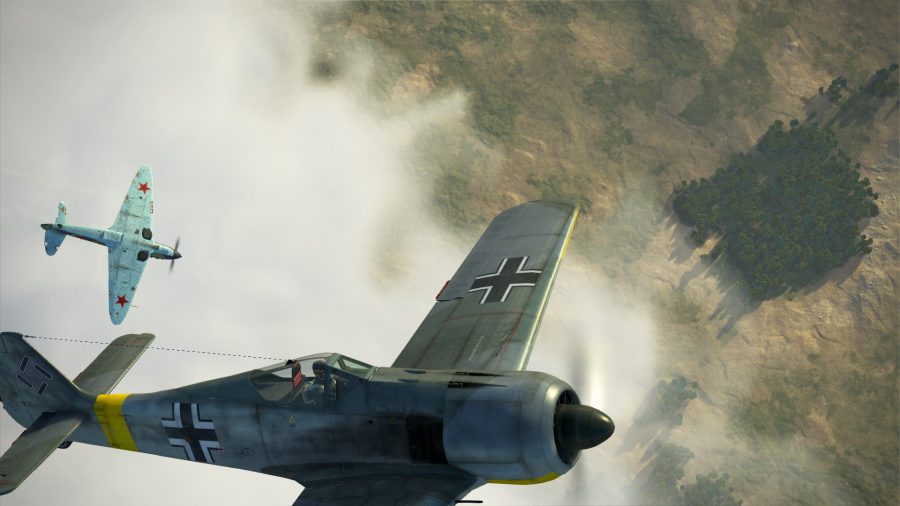 With the game downloading, let’s turn to what other things you’ll be needing. First things first, Battle of Stalingrad can be played with mouse and keyboard. The basics are perfectly manageable with those alone – though I may have to draw the line at using a trackpad! The finer points of flying, however, end up becoming very tricky – especially if you want to dip your toes in some of the higher difficulty settings. Certain manoeuvres that are second nature to joystick users are quite impossible for mouse users.

Second offensive: These are the best WW2 games

To fully take advantage of what IL-2 offers, a joystick is, unfortunately, required. Do not panic. Entry-level joysticks can be picked up relatively cheaply (look out for Wargamer’s guide on the very best shortly). Once bought, the number of games they can be used for makes them worth every penny. Whilst the higher-end joysticks can go for eye-watering amounts, you’re only interested in something that does the job. The only thing that is truly critical with a joystick is that it is a “twist-stick”. In other words, to move the rudder, you twist the stick. All the rest: separate throttles, rudder pedals, Track-IR and virtual reality headsets, et cetera – those all fall under “nice to have”. 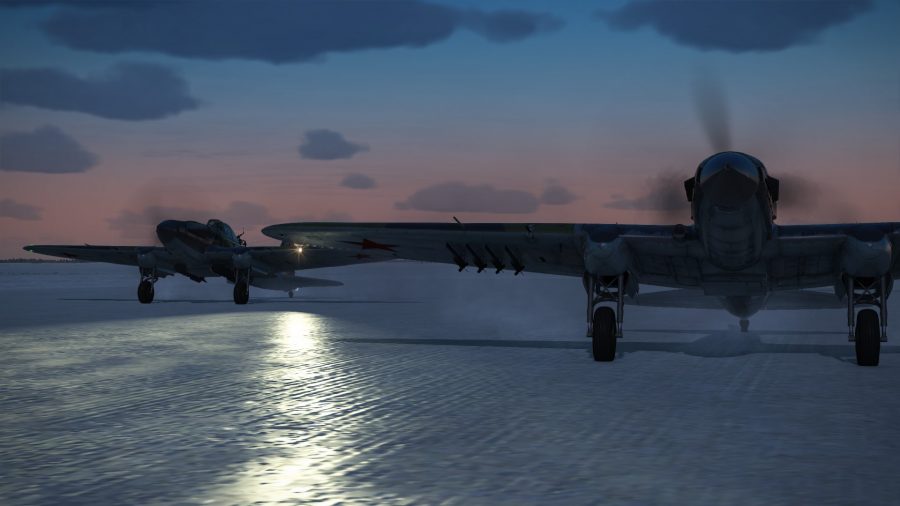 If you’re hooked, get them, but they’re not vital starting out. Even in multiplayer – though I’ve been told by many that something like Track-IR is vital to be competitive – I’ve held my own with just my standard joystick hat switch.

A joystick doesn’t make you win automatically. Like any tool, at first you’ll feel like you’ve gone backwards compared to mouse and keyboard. Stick with it. Once you’ve become used to a joystick, the amount of control it gives you is quite unbeatable. 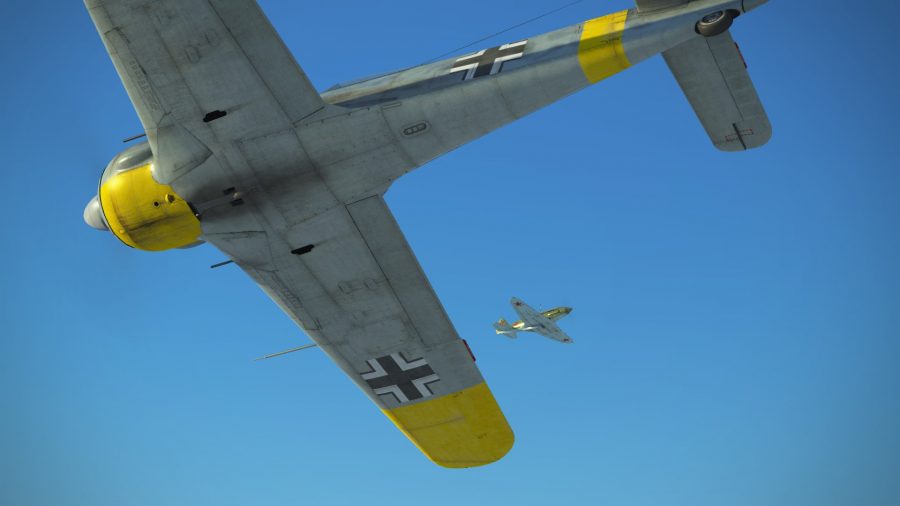 So – the game’s downloaded, and your hardware is (maybe) set up. If you want to dive straight in and just get flying, quick missions are the way to go. I’d recommend selecting a solo flight (i.e. an icon with a single aircraft on it) and selecting a ground attack aircraft for your first fly out. You could pick any – but ground attackers such as the Ju-87 Stuka or IL-2 Sturmovik are generally docile, and don’t hide any nasty tricks for the new pilot. Leave the default settings as is – you want to spawn up in the air so you can just get a feel for the controls.

If you want to dive straight in, quick missions are the way to go

Before you start, if you’re using the mouse, I’d recommend changing some difficulty settings. The game comes with two pre-packaged difficulty levels: Standard and Expert. In addition, there’s Custom, which allows you to mix and match options as necessary. Select Custom and switch on ‘Autorudder’. This ties the rudder to the movements of your mouse, and thus ensures that you’re not missing out on an entire control surface of your aircraft. 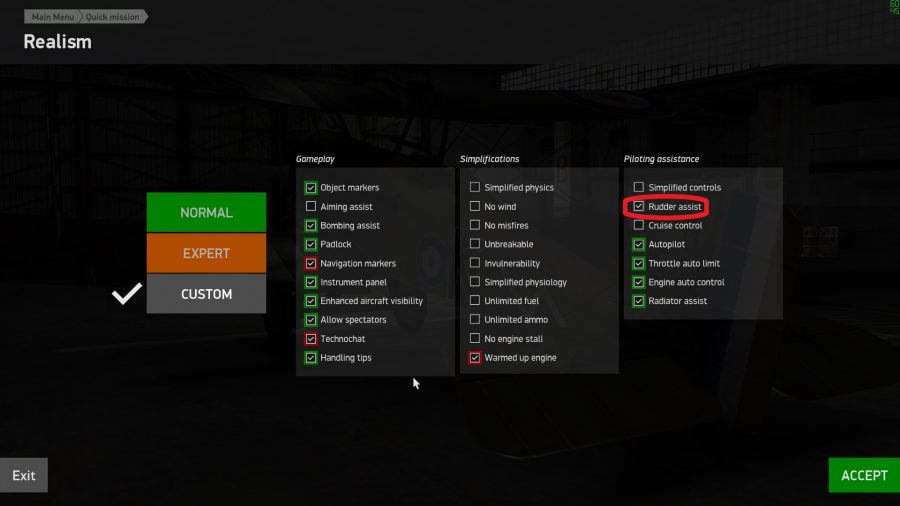 Really, flying is simple – takeoff and landing are the problem. Move the joystick or mouse left and right to turn. To go up, pull the stick back, or move the mouse up. Push the stick forward, and the mouse down, for down. Easy. The odds are you’ve done this already in any number of FPSs, and arcade flight games. 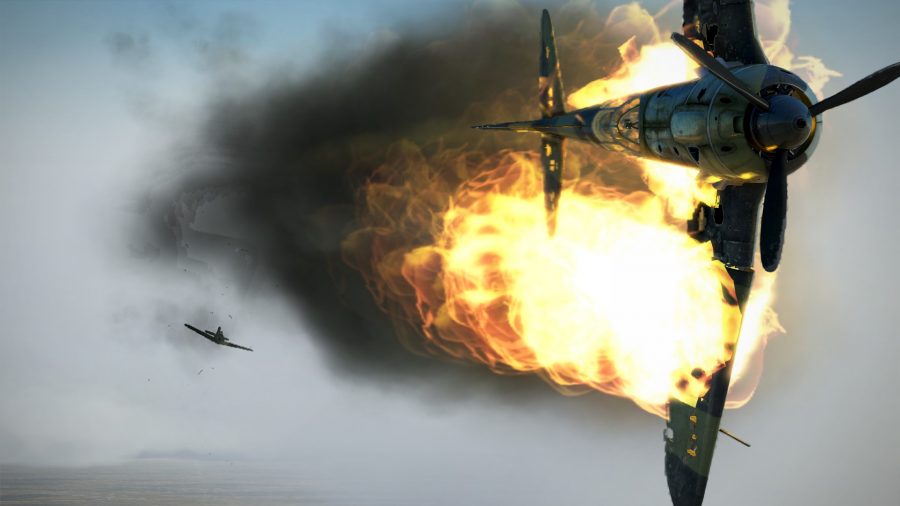 Mouse users will find this particularly straightforward. Move your mouse and the aircraft will follow. Joystick users will find it a bit trickier. You have far more control over your aircraft, but in turn you’ll find it a lot harder keeping it flying straight and level. Not to worry – this will only get worse as we increase the realism!

When you feel up to it, try going down low. There’s nothing like trees and buildings to give your manoeuvring purpose. If you crash, well, now you get to see IL-2’s damage modelling in all its glory.

As you’re flying along, make a note of how your throttle movements (mapped by default to your +/- keys or to your joystick’s throttle) also adjust your engine’s mixture and other settings. That sort of thing doesn’t matter for the moment; but keep those aspects in mind as you learn more about your aircraft. 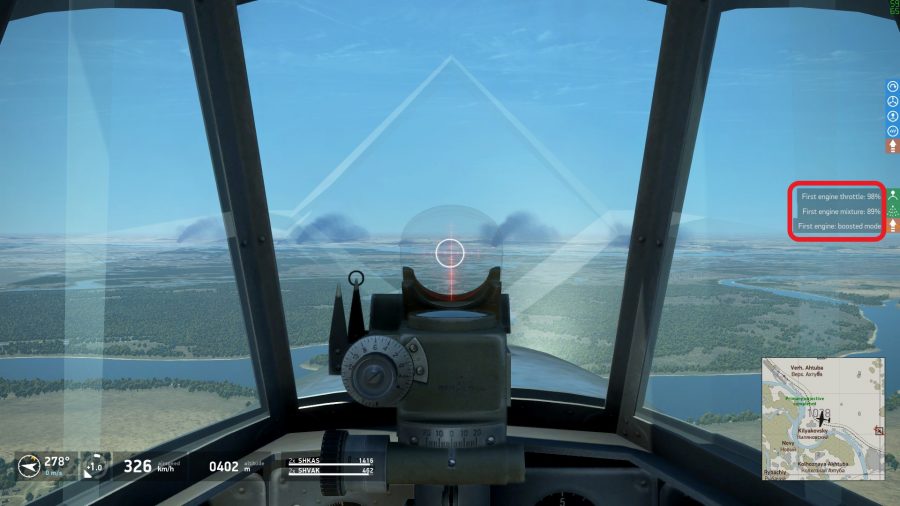 So, you’re getting familiar with some aircraft and how they perform. Now – to battle. This is a combat flight simulator after all. Be warned, learning the skills to shoot an aircraft down is a path as long and challenging as learning to fly. These skills can’t really be taught; muscle memory outperforms any amount of text. The best and only advice I can give is to relax. Tense movements lead to the aircraft wobbling all over the place. You almost have to let the aircraft do the work for you.

Ultimately, there really is only one way to improve: practice, practice, practice. My preferred way to learn is, once again, in quick missions. You can configure them so that you get waves of enemies attacking you. Choose something slow and poorly armed at first – Transports such as the Ju-52 or C-47 are ideal for this. You just need to get to grips with getting your aircraft under control enough to consistently shoot down your target. At first, you might use up all your ammunition just shooting one aircraft down. 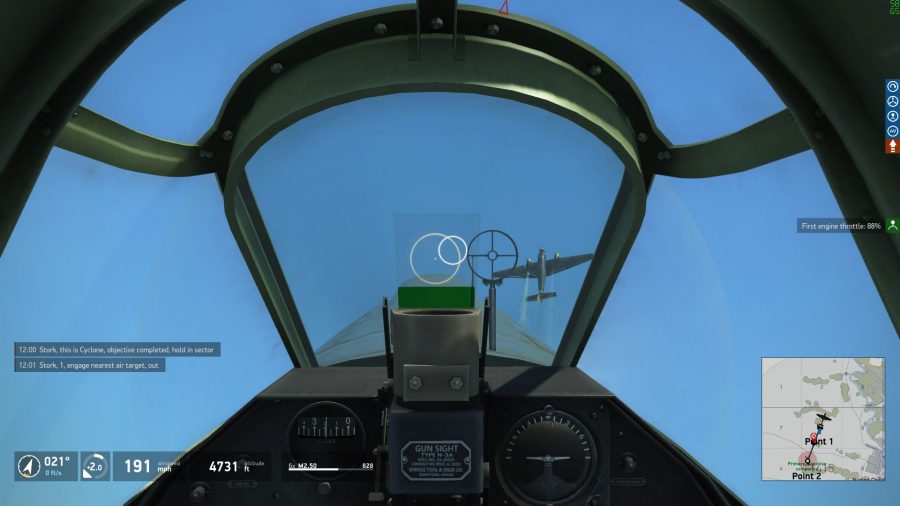 As you improve, however, make these enemy aircraft smaller and nimbler, so you have shorter windows to shoot, and must begin to manoeuvre against them (thus improving your dogfighting skills while you practice shooting). Going up against fighters also forces you to properly learn the ins and outs of deflection shooting, a.k.a. lead distance – how far ahead of your desired target you need to aim to account for the time your bullets will take to reach it. I’m still struggling with that part.

You don’t have to be a dead-eye, effortlessly destroying anything unfortunate enough to stray into your crosshair, but putting in this skill practice will save you much disappointment when you get into proper dogfights that you have no such control over, both in single player campaigns and multiplayer. Coming into those situations unprepared, I’ve shot half my ammunition and never hit a thing. 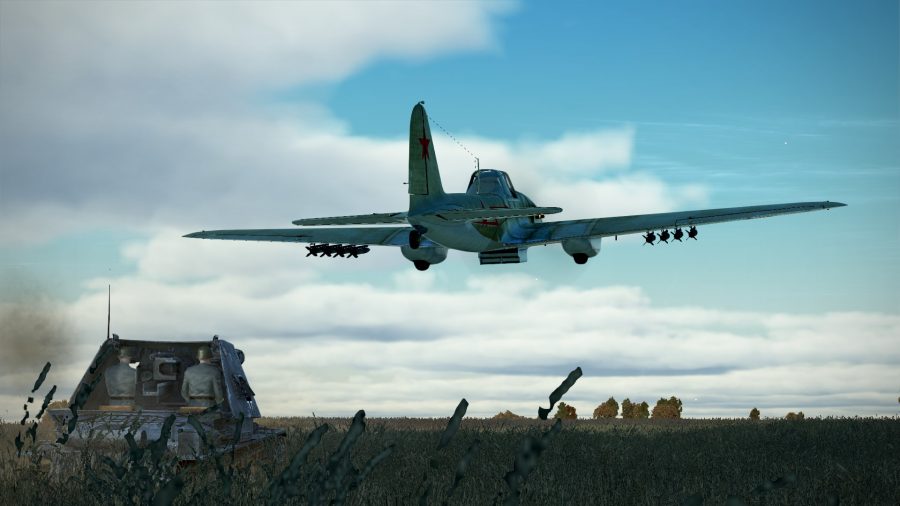 One of the great strengths of combat flight simulators is the sheer breadth of what’s on offer. Between highly detailed aircraft, many and varied campaigns and missions, and the whole other kettle of fish that is multiplayer, it is entirely possible to play for years and never see an enemy as you perfect your flying or be in constant combat. Try a bit of each – see what you keep coming back to.

Savour each milestone of the journey through these flight sims

This guide cannot cover everything. Takeoffs and landings would double this guide’s length by itself, so much depends on the individual aircraft you’re flying. Basic engine management would triple that. The less said about the ins and outs of ground attack, the better. Thankfully, the fan-made resources for IL-2: Battle of Stalingrad are excellent and provide detailed information on individual aircraft as well as more general manoeuvres and concepts.

Above all, however, enjoy it. Savour each milestone of the journey through these flight sims. There’s nothing quite like the accomplishment you’ll feel when you crack each new problem along the way, be it not melting your engine on a long flight, or finally getting your first player kill in a realistic multiplayer server. Half the time, even mistakes lead to the kind of nail-biting landings worthy of the final scene of Memphis Belle.

Good luck. See you in the skies.

Failed nerd, failed Australian, Charles spends his days casting industrial quantities of wargaming terrain and being slightly dissatisfied with every game and story in front of him.