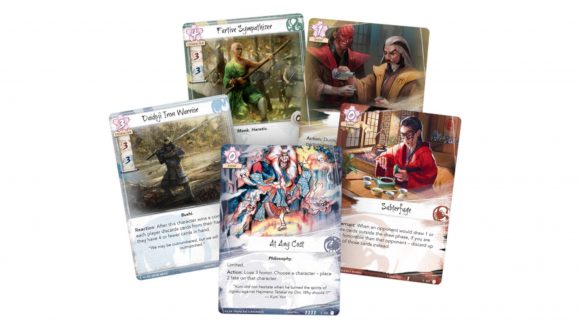 Peace at any Cost, the newest expansion for venerable east-Asian-themed fantasy card game Legend of the Five Rings, will be released some time in April, according to its publisher, Fantasy Flight. The firm released details of the final Dynasty Pack in the game’s current ‘Temptation’ cycle in a blog post on January 28,  adding that the pack would include a host of new cards for each of the seven Great clans, but would particularly bolster the Phoenix Inquisitors.

Most notable in the expansion is a new Stronghold card for the Phoenix Clan. The Shiro Gisu, a secret dōjō and home of the Asako Inquisitors, targets enemy players that rely on mahō sorcery and threaten the pure magical light that the Phoenix Clan so staunchly defend. When played, the stronghold enables you to draw a card from your conflict deck for each enemy character with no fate currently in play.

Outside of some new digs, the Phoenix Clan will also receive new character cards, including the Inquisitorial Initiate and Relentless Inquisitor. These zealots of the light can remove your enemy’s fate and discard cards from their hand.

If you find the righteous fanaticism of the Phoenix Clan grating, maybe the new additions to the Dragon Clan will be more up your street. A powerful new attachment, Belief in the Little Teacher, allows you to influence the honour of selected characters, and the Furtive Sympathizer character will have you switching enemy stats to your advantage mid-combat. 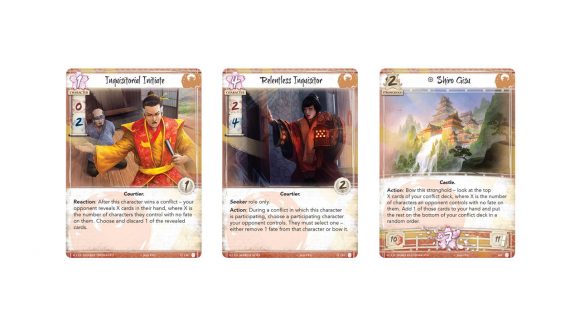 Alongside these, many of the new cards focus on manipulating the fate of opponents’ characters and buffing that of allied forces. In parallel, others can improve your ability to defend your characters’ fate from the pernicious attacks of your enemy. Two new province cards and a raft of dynasty and conflict cards will also be included in the Peace at Any Cost Dynasty Pack. 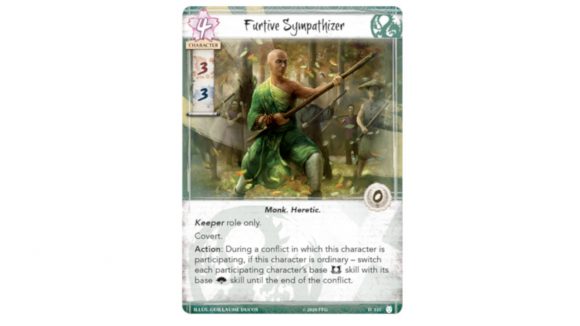 In the mood for slinging some arty cards, but prefer it a little more fantastical? Read our guide on how to build a Magic: The Gathering deck.