MTG’s Commander format (also called EDH) is one of the most popular ways to play Magic: The Gathering, and it’s easy to see why. Duking it out with a group of friends, using massive decks with cards from all across the game’s history, is a whole lot of fun. The sheer number of strategies available, the possibility of temporary alliances and deal-making, and the fact that no deck will ever play the same way twice, all help to make the format feel like a breath of fresh air.

That said, actually getting started in Commander and constructing your first deck is a bit of a steep hill to climb. To build a Commander deck you need 100 cards, and all of them, aside from basic lands, have to be different, so it can be very hard to know where to start. It gets even more intimidating if you take into account that you have over 20,000 possible cards to choose between. Maybe try not to think about that for now…

Before you start hyperventilating, let me hit you with the good news. In Commander, there are no fatal mistakes. One card is never going to make or break your deck; in fact, chances are it won’t even show up in any given game (particularly if you really need it to). So, while it can be fun to ruminate on the merits or drawbacks of every possible inclusion, it’s never worth stressing about. You should instead focus on the big picture, ensuring your deck works well as a cohesive whole.

There is one exception to that rule: one card you definitely need to dedicate some real brain power to pondering, and it’s where we’ll kick off this guide… 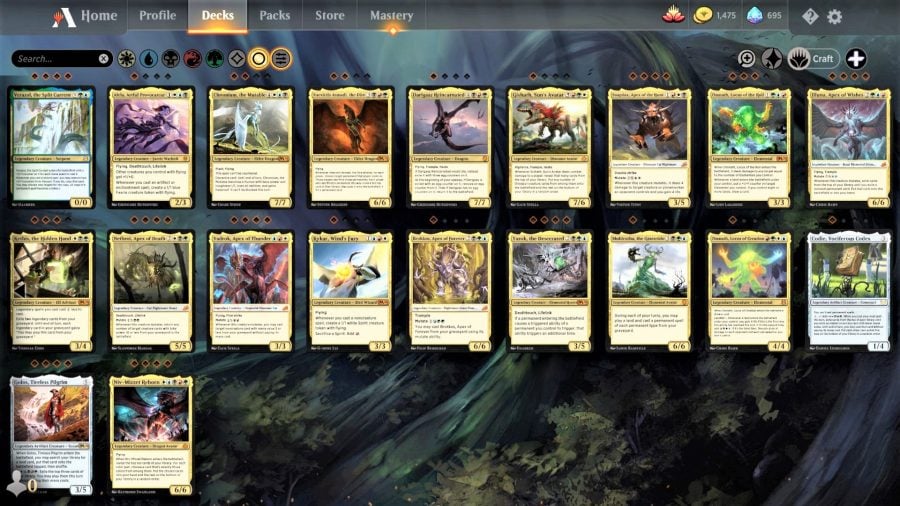 The best way to start crafting a (big C) Commander deck is to find a (small C) commander you like the look of. Your commander is a legendary creature that sits at the head of your deck and helps to shape it. Most drastically, it dictates what colour cards you’ll play: you can only use colours that are in your commander’s casting cost, or the cost of its abilities. As a result, a mono-coloured or colourless commander leaves you with simpler choices to make, but a more restrictive deck, compared to one that enables all five colours of magic.

Picking out your first commander is a personal choice, with no wrong answers

A sweet spot of two to three colours is a great place to start for your first attempt. All commanders, to a lesser or greater degree, will push you in a particular direction, towards a particular set of strategies. Some work well with a certain creature type, such as birds or zombies; others favour particular game mechanics – pulling cards out of your graveyard, for instance, or stealing your opponents’ best tools. Some commanders work well with huge, trampling creatures, others with vast armies of tiny minions, and some with as few creatures as possible.

There are many, many commanders to choose between. Picking one out from the bunch is a highly personal choice, there are no wrong answers. If you want something powerful, here’s our pick of the best MTG commanders, but the golden rule is to choose something you find fun!
Once you’ve found the captain of your ship, it’s time to pick some cards that suit your game plan or theme. 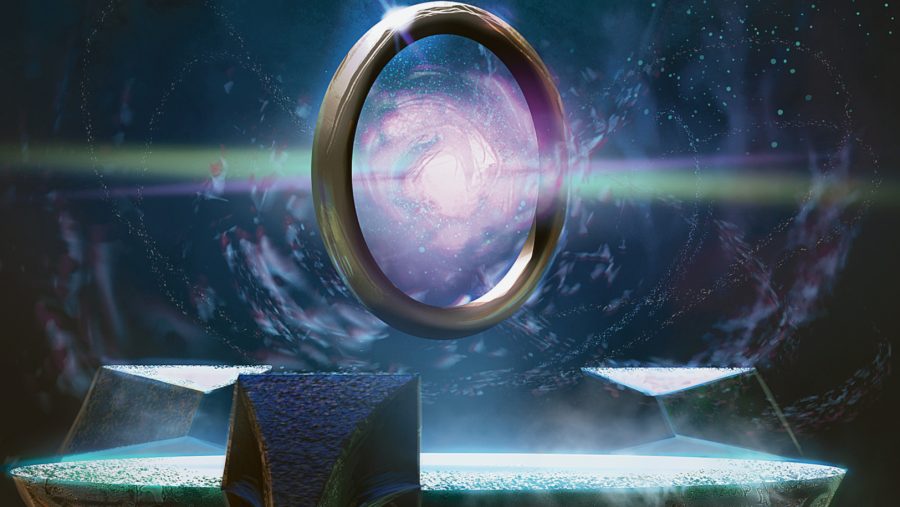 The ideal Commander deck is one in which the cards are all working together to make each other better: many hands making light work (of your opponents). It’s fine to throw in a few powerful cards just because they’re powerful – which is why Sol Ring has a reserved seat in pretty much every Commander deck ever – but usually the best result, and the most fun, comes from crafting a deck that’s a specialised, synergistic machine.

The average Commander deck will want about 37-40 land cards. You can add more lands if your deck has:

Or (cautiously!) remove lands if your deck has:

Almost always, your commander is going to be a big part of your game plan, whether it’s a win condition, or just grease for the wheels. But, while commanders tend to serve as central pillars for decks, two decks built around the same commander can be completely different, based on the choices made when brewing them.

For example, if your commander has the ability to gain a lot of life, you might build a Commander deck with cards that benefit from maintaining as high a life total as possible, and focus on out-enduring your foes – or you might use your life total as a resource, burning through it to fuel powerful abilities and relying on your commander to keep yourself from succumbing.

Figuring out your game plan and finding cards that fit into it is the trickiest part of building a commander deck, but it’s also extremely rewarding. Online resources like EDHREC are perfect for finding powerful, popular cards you might’ve otherwise missed, but it’s also great to go completely off-piste, figuring out different interactions between niche cards, and building something that’s entirely your own. 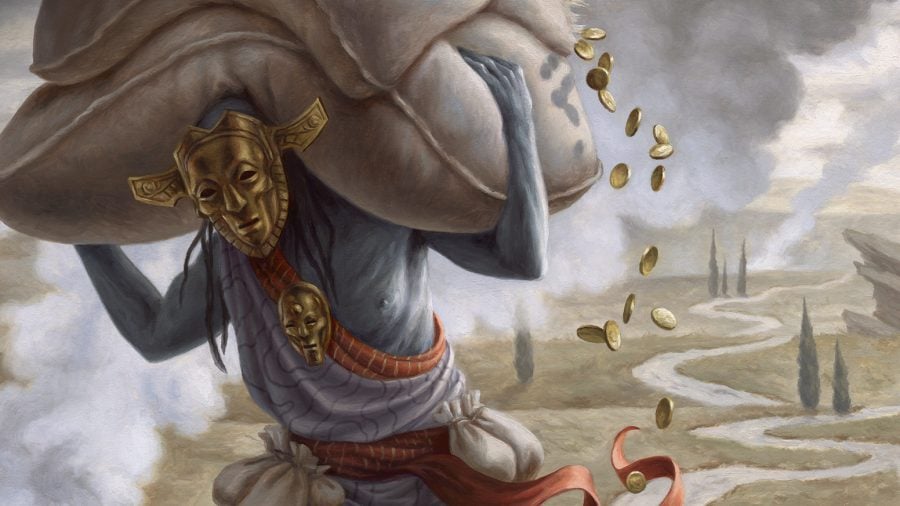 What else to include?

In Commander, there are a few types of card that every deck should include, vital roles that need filling. Most decks will want to have at least 10 sources of each of these, so if you’re struggling to reach that elusive 100 card total, just remember the three R’s: Removal, Ramp and, er, CaRd Draw.

When it comes to removal, you want to avoid spells that dish out small quantities of damage, designed to pick off tinier creatures. Instead, include flexible removal that can deal with many different types of threats, as well as board wipes that can devastate your opponents, and help you claw back from the brink of defeat.

Whether it’s getting lands out faster, or playing creatures and artifacts that generate mana, you need a way to ‘ramp’ – that is, to rapidly increase your available mana, beyond playing your one land a turn. The more mana you have in early turns, the faster you can play spells and creatures, and start building up your board. Without ramp, you’ll likely be left in the dust.

It’s no good having more mana, if you run out of things to do with it. Card draw allows you to “reload”, replenishing your resources, and increasing your options. Repeatable card draw is particularly valuable, helping you build momentum, and start to run away with the game. 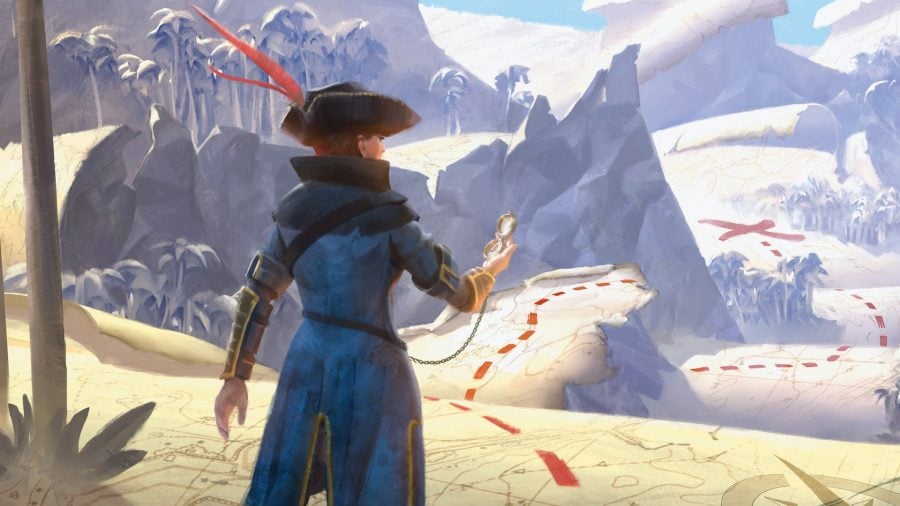 Commander is the perfect format for players who like to tinker, and most Commander decks are in a constant state of flux. Even without intending to, you’ll quickly work out which cards aren’t pulling their weight, and start seeking replacements. Before you know it, you’ll be spending hours switching out one card for another, and scouring new Magic sets as they’re released for juicy new additions to your deck.

There’s no such thing as the ’perfect’ commander deck

But if it’s not your thing, don’t get too hung up on optimisation. Bear in mind that there is no such thing as the perfect Commander deck, or even the perfect deck for a particular commander. Commander started out life as a casual format, and the power level is generally determined by what individual playgroups find fun. While it can be exciting to do battle with the mightiest cards in Magic’s lengthy history, it can be just as enjoyable to go the opposite way and build a deliberately low-powered deck that tells a story or fits a non-mechanical theme.

This guide should serve as a starting point to deck-building in Commander, but in truth there isn’t a wrong way to go about it. You may find that your most beloved deck is the one that tries to assemble an unstoppable combo by turn three, but it could also be the unwieldy pile where you’ve stuffed in 20 planeswalkers and only use cards that feature silly hats. The important thing is to have a good time!

Need a refresher on the basics of putting together any Magic: The Gathering deck? Check out our deck-building guide. And if you’re looking to win Commander games, here’s our list of the best MTG commanders of all time.

Also, while we adore Magic: The Gathering here, it ain’t the only cardslingin’ game in town; why not have a gander at some of the best trading card games there are.