Selecting one of the best MTG commanders is essential  in Magic: The Gathering’s Commander format. Your commander is the legendary creature that’ll lead your other 99 cards into combat, so it’s where you should start when  building a Commander deck. Your choice of commander will determine the colours you can play, and is key to shaping the rest of your deck, so it’s worth taking the time to consider your options.

First rule: not every commander is created equal. Some are powerful deck-pilots born for the role, while others are not cut out for the pressures of leadership. When there are around 1,300 potential commanders in Magic: the Gathering, and all of them are looking at you with pleading eyes – hands, talons, or pseudopods clasped earnestly, how do you pick the best MTG commanders to be your champion?

Well, luckily, we’ve done the homework early, and since we’re nice we’re going to let you crib off us. This guide will clue you in to the top commanders available. Depending on your group’s playstyle, raw power may not be your main concern, but, if you do want a deck that packs a punch, each of these commanders will set you on a course to victory.

So, open your folders and calculate the right proportion of Land cards, because…

These are the best MTG commanders: 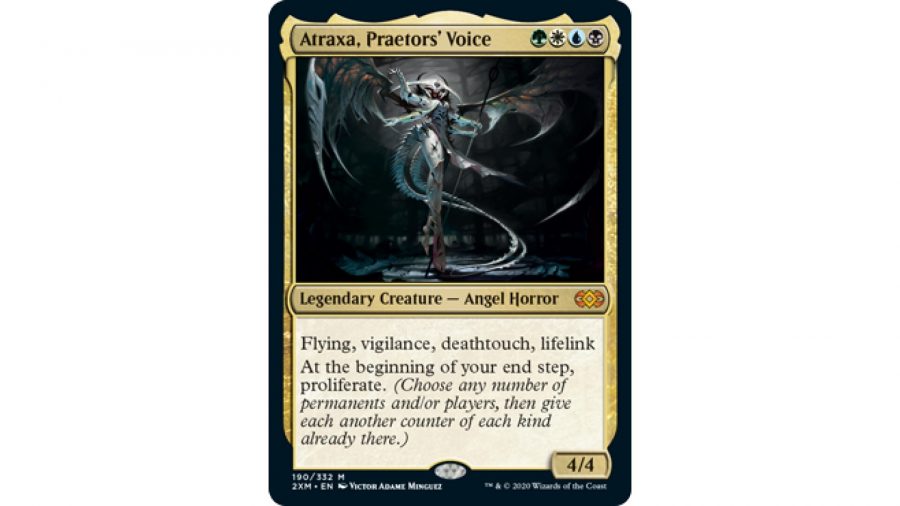 While not quite the dominant force she was in 2016 Atraxa still makes a great commander. With strong colours, a fairly low cost, a powerful statline, and excellent keywords for combat, this angel horror has a lot going for her even before we get to her ability. Simply put, Atraxa lets you proliferate at the end of each turn, meaning anything with a counter on it gets another of the same type.

Each MTG counter type is a new strategic option for Atraxa

There are all sorts of tricks you can do with this, as there are countless different kinds of counters. You might use +1/+1 counters to boost a beefy army; charge counters to power up a range of potent artifacts; or, nastiest of all, poison counters to outright kill an opponent, regardless of their life total.

Remember that planeswalker loyalties can be boosted with proliferate too, so be sure to throw a few of the best planeswalker cards into any Atraxa deck. 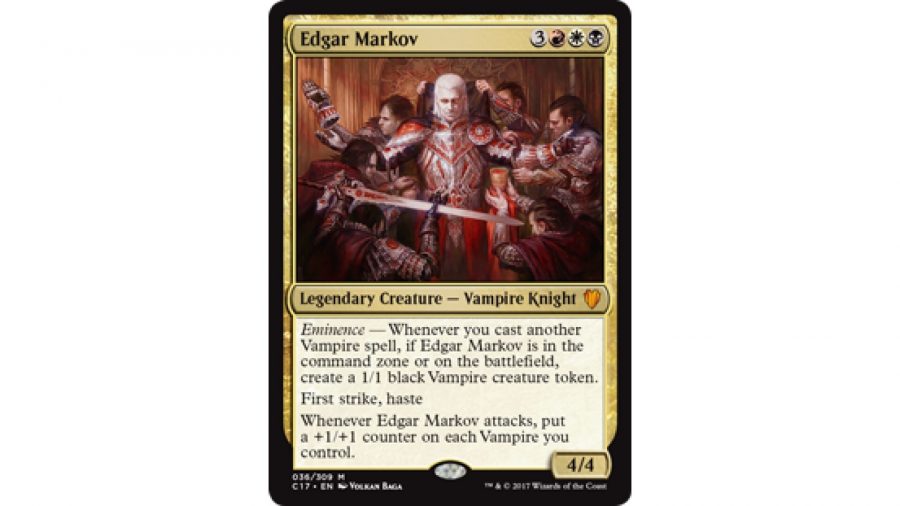 The Commander 2017 set was all about tribal decks, each focused on a single creature type: cats, wizards, dragons, and vampires. Edgar Markov led the cats, no, sorry, the vampires deck, and quickly rose to the status of fan favourite.

With the ability to create a swarm of little nippers, then pump them up each time he attacks, Edgar naturally works best in a horde-style deck that can swiftly overwhelm opponents.

Red, white and black (Mardu) colours give you access to all the top removal cards, and best of all, Edgar’s eminence ability means you don’t even have to put him in harm’s way . He can sit pretty in the Command Zone, churning out mini-mes in safety.

Edgar recently appeared on a new card in the Innistrad: Crimson Vow set. The modern version can turn into a coffin, which is a neat party trick, but it pales in comparison to the power of the original. 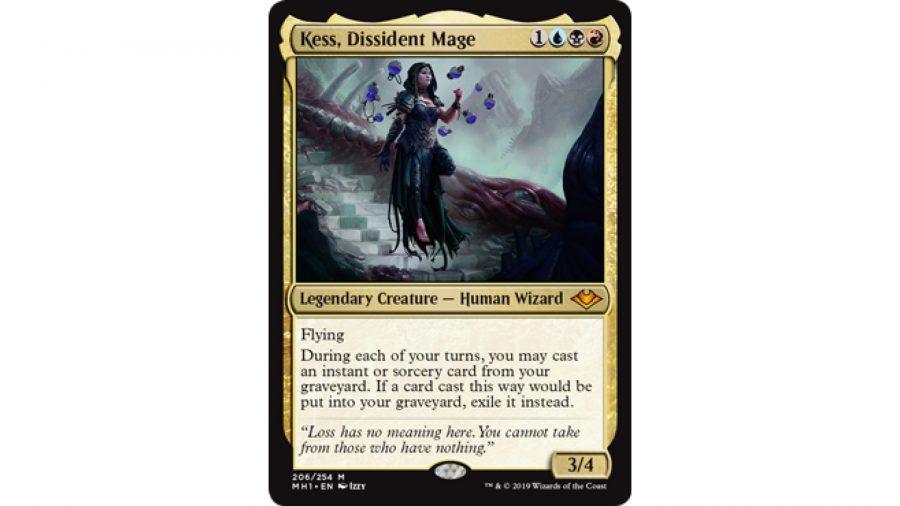 The next Commander on our list was also in the Commander 2017 set, but because she’s such a nonconformist, Kess, Dissident Mage was slinking around amidst the 99 instead of standing up front where she belongs.

Kess, Dissident Mage is undoubtedly one of the best MTG commanders of all time, but where the strength of other commanders on this list is plain to see, Kess has a subtle kind of power.

Her effect, allowing you to play one spell a turn from your graveyard, is pretty tasty. You can build a fun deck  with this commander, filled with lots of big spells that Kess can squeeze twice the juice out of. However, there are also some broken combos available to Kess that gives her dangerous game-winning potential and a firm place in cEDH (competitive EDH).

With Kess, cards like Tainted Pact can be used twice in a row to exile your entire deck, while also fetching Thassa’s Oracle, allowing you to win the game on the spot.  We’ll caution you now, that just because you can create a game-breaking combo in Commander, doesn’t mean you always should. It really depends what your playgroup enjoys. 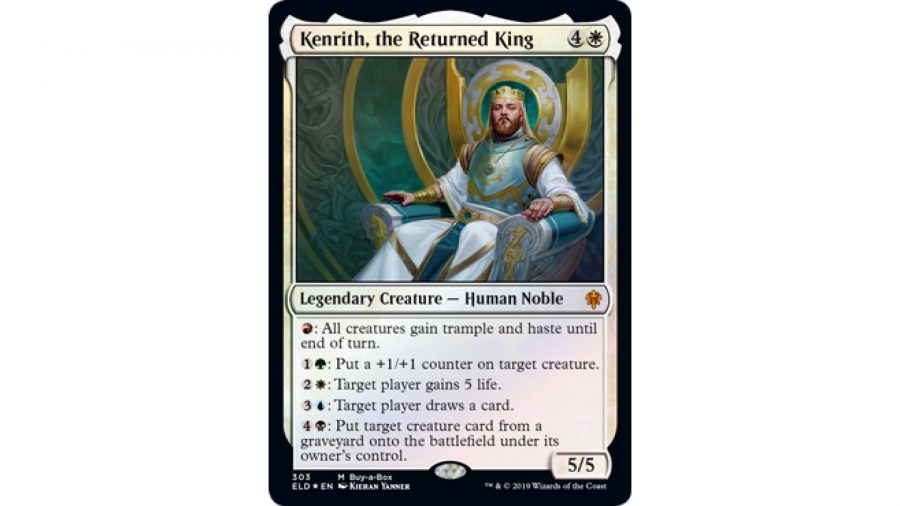 Five-colour commanders are some of the strongest because they allow you to use any card in the game, for ultimate flexibility. As a result, they’re a little controversial, since many lend themselves to less focused strategies and decks, where you just want to cram in all the best cards in your collection. But we think that’s as valid a play-style as any – and it’s hard to pass up jack-of-all-trades commanders when they’re as good as Kenrith, the Returned King.

Five-colour commanders get to have all the best toys

Kenrith shines because all of his abilities are useful, and some are invaluable. You only need white mana to cast him, so you can have him out on the field and gradually unlock new abilities as you play new Lands.

He’s a great beginner commander, since you can experiment to your heart’s content, and it’s hard to go too wrong. Synergy is not required – just brute strength! 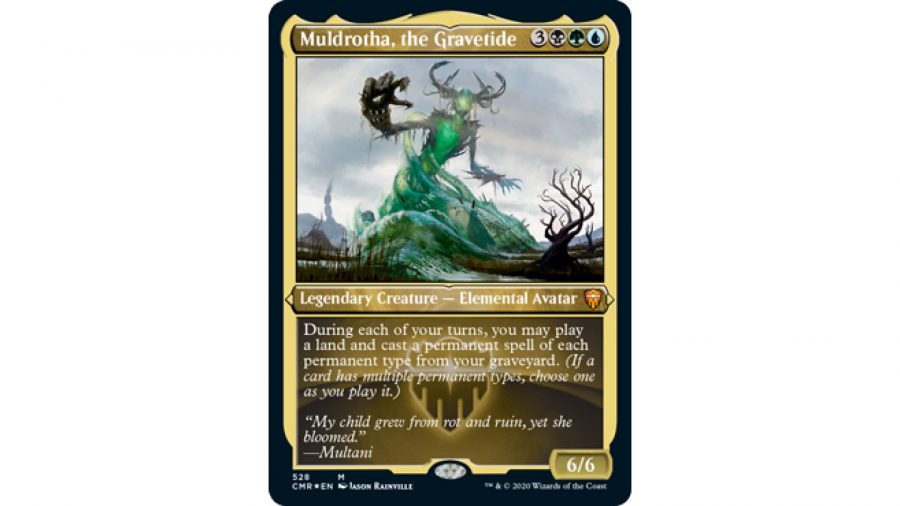 Do you hate it when your opponents’ blow up your stuff? Then Muldrotha, the Gravetide is the best commander for you. Allowing you to play one card of each permanent type from your graveyard each and every turn, this noxious elemental turns your graveyard into an extension of your hand.

Nice and neat: All the MTG sets in order

Unfortunately, with a high cost and incredible ability, Muldrotha is one of those commanders that attracts removal like a magnet. On the bright side, her Sultai colours (black, green and blue) give you access to a ton of power outside of her own impressive strength, including excellent creatures, removal, and card draw. And when you do manage to protect her for long enough to make good use of her resurrection powers, your opponents are going to have a bad time. 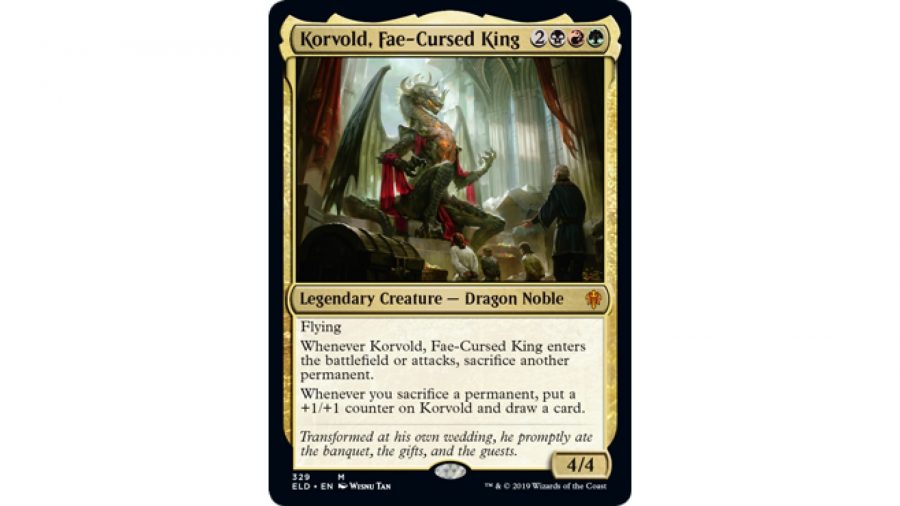 Originally designed to lead a Brawl deck, Korvold, Fae-Cursed King is just as good when playing the role of commander. We suppose when you’re a monarch, being in charge just comes naturally.

With Korvold leading your deck, sacrifices have to be made

Korvold’s insatiable demand for sacrifices, which at first appears to be a drawback – perhaps even some sort of curse of fae origin – can, with a little deckbuilding finesse, be turned into a great asset. Korvold does half the work for you, since his ability draws cards each time you sacrifice a permanent.

If you want to play with cards from Korvold’s home set, Throne of Eldraine, there’s some definite potential for an amusing food-themed deck, helmed by a greedy dragon king that just wants snacks. However, a deck that revolves around creature tokens, death triggers and treasure is probably the more optimal choice. Korvold is a good commander pick if you enjoy crafting synergies and having lots of toys to play with. 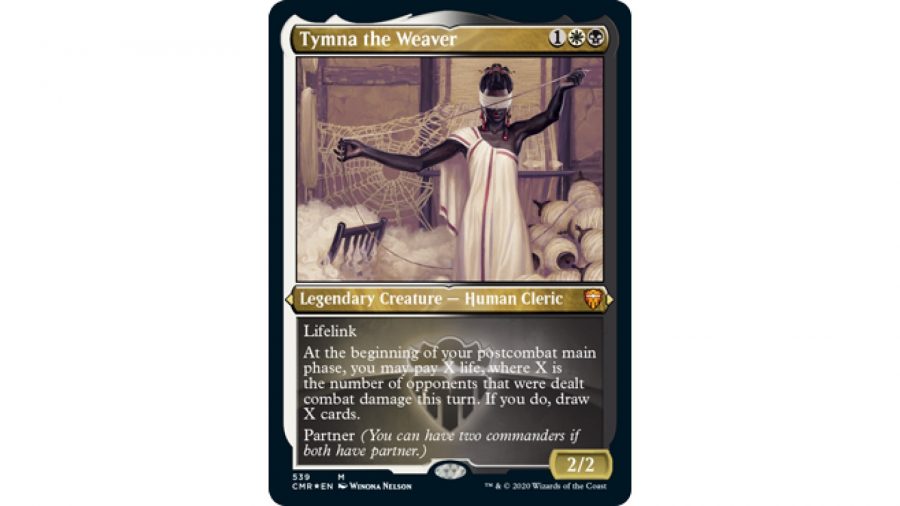 Tymna the Weaver may not look like much from the outset – sure, she draws cards when you hit people, whatever. But never underestimate the power of friendship. Tymna is a winning commander choice because she has the Partner ability, which – like Tymna herself – was introduced in the Commander 2016 set. That means you can pair her up with any legendary creature that also has ‘Partner’ to give them joint leadership of your commander deck.

Now let’s begin: How to build a Commander deck

Two commanders are better than one, since they unlock new card options and new synergies, as well as ensuring you always have a creature to play out. Tymna makes this list simply because she’s one of the most versatile creatures with the Partner ability. The card draw she provides will be valuable, whatever strategy you’re going for. 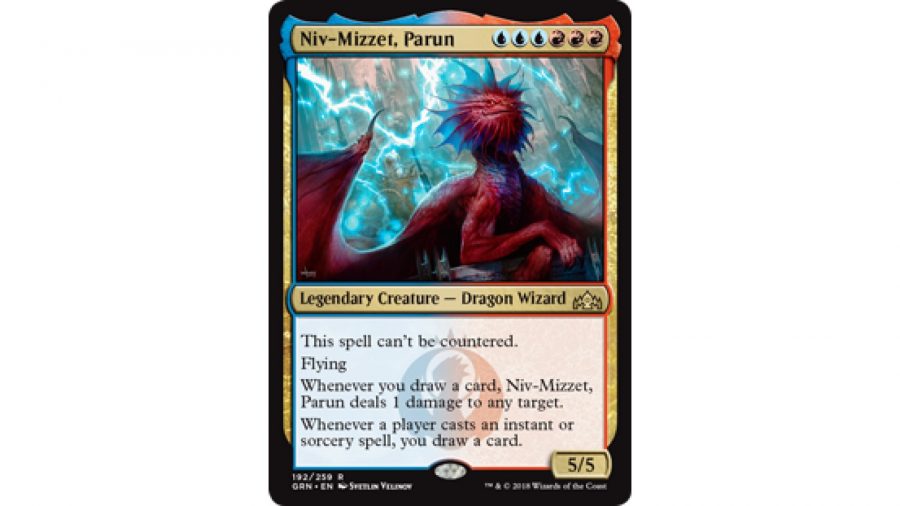 Another dangerous dragon for your perusal, Niv-Mizzet, Parun is a top-tier commander for players who like to sling spells and unleash game-winning combos. Allowing you to deal damage each time you draw a card, and draw a card each time anyone casts an instant or sorcery spell, it’s hard not to get value out of this commander. Whenever a player tries to kill Niv-Mizzet, the blow is softened a little by the extra card their attempt rewards you with.

Niv-Mizzet can pull off all kinds of ridiculous combos

Niv-Mizzet can’t be countered, which is excellent on a hard-to-cast commander. Your own counterspells, meanwhile, become a joy to use, as each one now draws you two cards: one for your counterspell, one for your opponent’s fizzled spell. The two damage you can then zap them with really just adds insult to injury.

All the card draw Niv provides will help you dig for one of the unstoppable combos you can play in this deck. Here’s one – enchant Niv-Mizzet with Curiosity for one mana, draw a single card however you choose, then draw your whole deck and dish out about 70 damage. Hooray!