In Magic: The Gathering, planeswalkers are mighty, magical beings capable of dimension-hopping. They walk between the planes, exploring the multiverse, dealing with world-ending threats, getting into unlikely scrapes, and generally making a humongous mess wherever they happen to roam.

The central conceit of Magic: the Gathering has always been that the players themselves are planeswalkers, using their mystical arts to do battle via summoned creatures and spells. Beyond that, they’ve always been central to the story of Magic. But they didn’t exist as cards in their own right until the game was already 14 years old. Back then, the introduction of planeswalker cards in the Lorwyn block had many fans fearing they would radically reshape the game. And, to speak plainly, they have – though most would agree that that’s no bad thing.

Planeswalkers are a unique type of card, with their own health (or loyalty) pools which they can spend (or increase) once per turn to activate numerous loyalty abilities, and which can be depleted by spells or attacking creatures. Many are just a minor nuisance, while others are supremely powerful, representing some of the top cards you can play in Magic: the Gathering.

Planeswalkers are value engines – they let you cast what are effectively free spells without spending cards or mana. You plonk them down, and your opponent has to immediately make a choice: either divert resources to taking your ‘walker out, or try and finish you off ASAP, before they run away with the game.

Here, in ascending order of excellence, are the absolute best planeswalkers: the ones you want on your side of the board, and the ones that will elicit a groan whenever your opponent puts them into play. 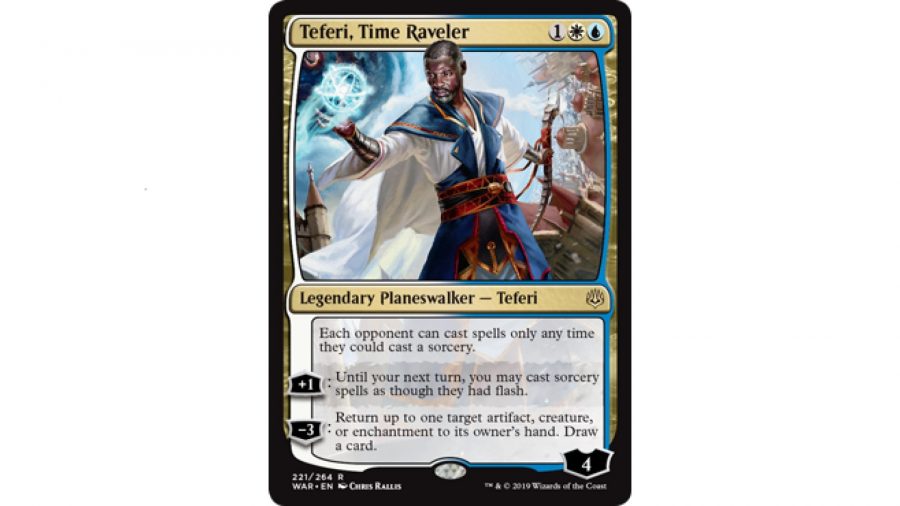 In MTG’s story, Teferi is a pacifist, a good dad, generally a nice bloke. But ask anyone who played Standard when Teferi, Time Raveler (T3feri to his friends) was king and they’ll tell you: he’s a villain through and through.

With less of a presence since his belated ban from Standard, T3feri still makes this list due to the sheer number of strategies he shuts down.

Thanks to his static ability, you can’t play counterspells; in fact, Instants in general are out. On top of that, your opponent can play Sorceries on your turn, which just feels unfair. That -3 ability is super-handy too, removing a threat and providing card advantage.

Paired with his buddy Narset, Parter of Veils, who shut down card draw, Teferi terrorised the Standard format for the duration of his time there. Beyond Standard, the card sees plenty of play in non-rotating formats like Modern as well, and with good reason. 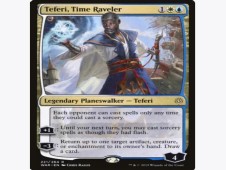 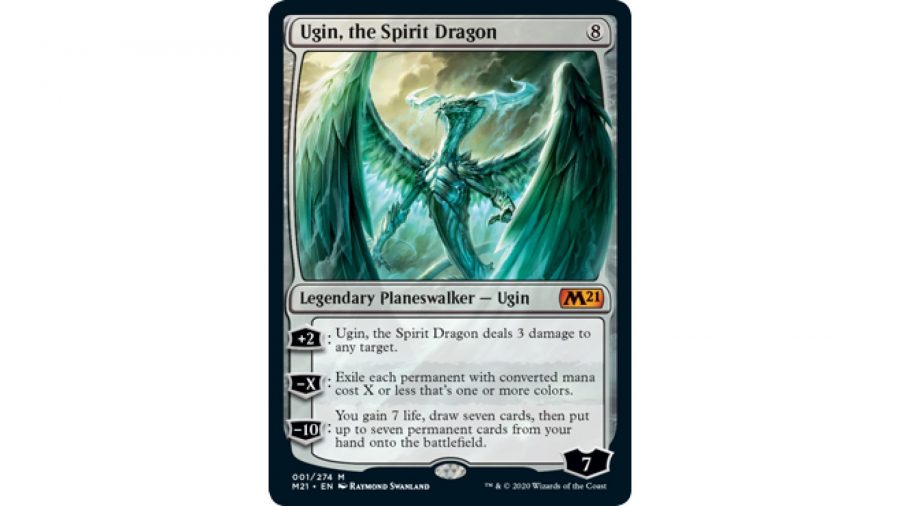 The most mana-expensive planeswalker on this list by a long way, Ugin, The Spirit Dragon comes with plenty of loyalty and some extremely powerful effects that make them well worth the cost.

The most important of these is their -X ability. It’s a game-ender, typically sweeping away your opponent’s entire board, while preserving any colourless permanents you’ve chosen to play, and, more often than not, also leaving Ugin alive to keep pecking away with their +2 damage-dealing power. Do dragons peck? Never mind, it’s not important.

Lay the foundations: How to build a Magic: The Gathering deck

Ugin’s ultimate ability is the cherry on top – it’s perfectly reachable, requiring only two turns before you can activate it, but you barely ever need to.

The card got a reprint in Core Set 2021, giving this already popular planeswalker a brand new lease on life. 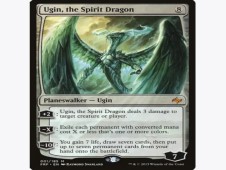 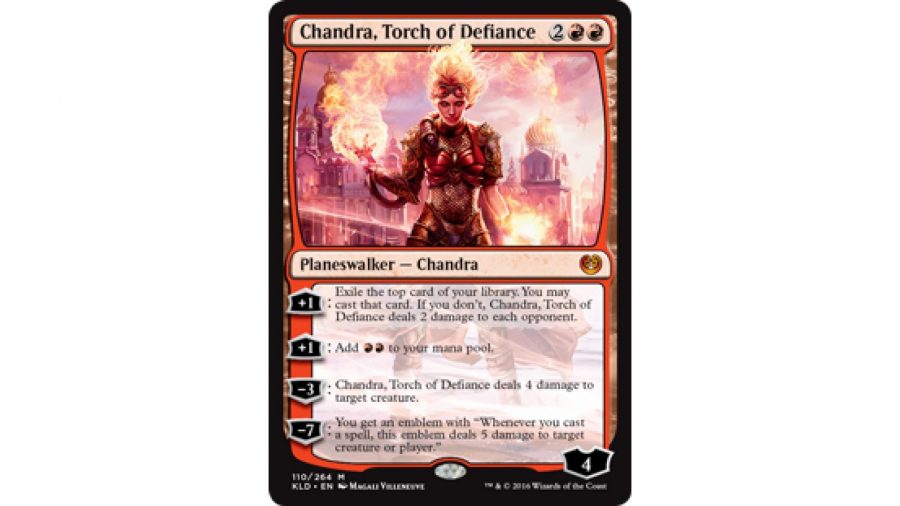 None of Chandra’s abilities are outrageously powerful on their own. Instead, her strength lies in how many niches she fills. For a character whose solution to most problems is setting things on fire, she’s got a surprisingly varied resume.

Chandra, Torch of Defiance has four different loyalty abilities, one more than most planeswalkers manage to bring to the table – better still, each one is very useful. You can generate card advantage or create extra mana with her +1 abilities.

You’ll always want to be doing one of these: use the second ability to play all the cards in your hand, and the first as soon as you start to run out. If you get into trouble, you can use her -3 ability to remove threatening creatures, and finally, her ultimate ends the game in short order.

That’s a lot of utility, all wrapped up in one super-economical 4-mana package. 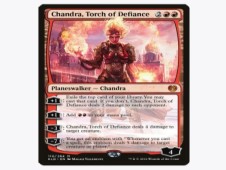 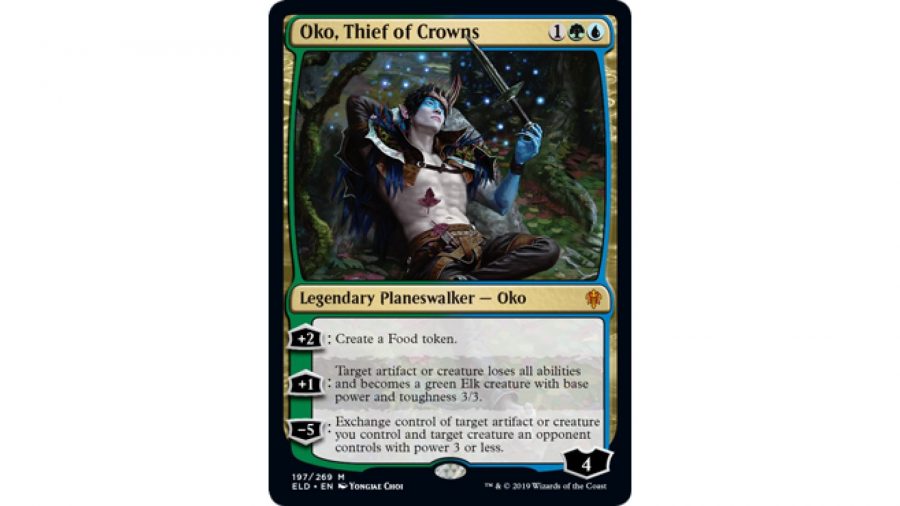 In late 2019, the only creature type in Magic: the Gathering was the elk. That’s all thanks to this devilishly good-looking Oko fella. Clearly billed as a troublesome prankster, Oko, Thief of Crowns, in fact, proved far more apocalyptic than that.

Liliana of the Veil – Denies resources, kills creatures and is generally a big early-game nuisance

Teferi, Hero of Dominaria - Untaps lands so you can hold up a counterspell, draws cards and puts threats back in their owners’ decks. Infuriating.

Wrenn and Six – Ridiculously cheap, with unassuming abilities that are hugely powerful paired with the right land cards.

Oko’s power mainly comes from his low casting cost and the fact that most of his abilities increase loyalty instead of reducing it. Oko comes down on turn 3 (often sooner, since green is the colour of mana ramp) and if you don’t have some way to dish out 6 damage right away, there’s not much you can do to catch up. That’s quite a tall order, so early in the game.

Oko has great versatility for a planeswalker with three abilities – he produces 3/3 elks to block your smaller creatures, and your bigger creatures? They’re elks now. Oh god, everything is elks now!

Fortunately, “Broko” Oko took a banhammer right to the kisser, and was kicked out of five different formats in total. You can still play him in Commander, though, if you want all the other players to suffer flashbacks and then turn on you in fury. 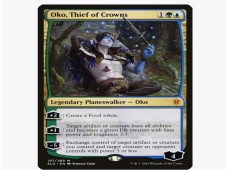 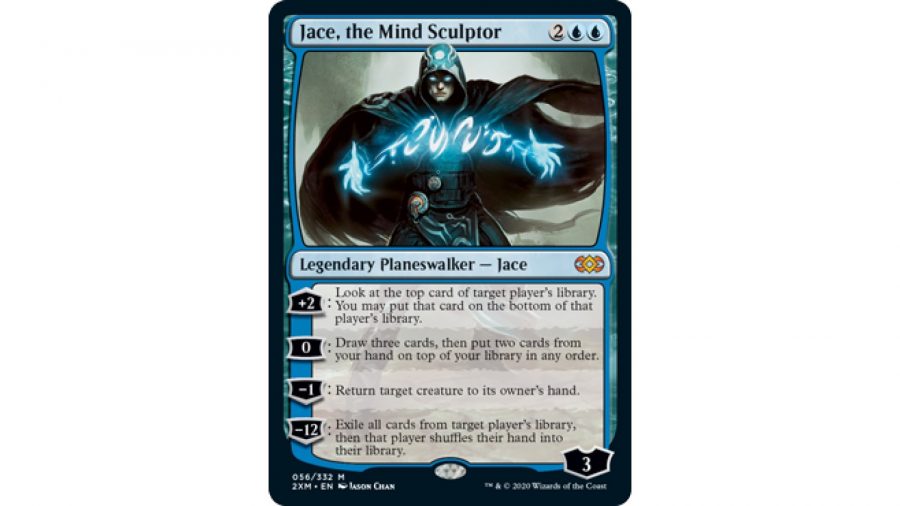 Oko is far too banned to clinch the top spot, so the prize instead goes to the ever-popular Jace, The Mind Sculptor, arguably the best planeswalker ever printed.

Why is Jace so good? Well, for starters, he’s cheap and comes with four abilities, both hallmarks of a strong planeswalker. But then, if you look more closely at the first and third of those abilities, you’ll see that they can be used in entirely different ways, depending on whether you target your opponent’s side of the board or your own. Jace must have been doing his daily stretches, because boy, is he flexible.

Digitally dominating: These are the best MTG arena decks around

Jace is a fantastic tool if you want to play a controlling game of Magic, giving you multiple methods to find the cards you need, and deal with your opponent’s threats. He’ll keep that up all game, while you get on with playing your win conditions and your opponent tears their hair out. The card wins games, simple as that.

Jace broke Standard wide open in 2010, and has been pulling his weight handily across all other formats ever since. He’s yet to be unseated as top dog, and any new planeswalker that did so would probably be courting a mass-ban like the one Oko received. 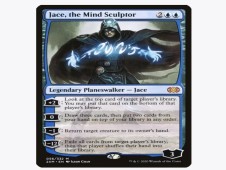