For anyone who’s suffered through the grind of Magic: The Gathering Arena’s ranked Standard play, it’s easy to lose faith in your strategy and look for help to start stacking up the wins. The current meta has ensured that a truly massive number of decks are viable for Standard, and can be ridden all the way to Mythic. Here we’ll take you through some of the best MTG Arena decks available, as well as what makes them so strong to play with, and difficult to play against.

It doesn’t matter whether you play these decks according to specific guides, or make personal tweaks to suit your own playstyle – it’s the overall synergy and strategies available that make these decks feel indestructible, and has seen them played at the highest level of the game.

After the release of Kamigawa: Neon Dynasty, it’s fair to say that what makes the best MTG Arena decks the best is in flux. A lot of the old decks that were guaranteed to win you games in the past, like Mono-White and Izzet Dragons, are still hanging around, but a load of new decks have arisen, young hopeful challengers looking to unseat them. It’s an exciting time to be playing Standard, but also an uncertain time. Fresh brews are appearing week by week, and the best MTG Arena deck of the moment may soon be surpassed by a new variant.

However, we’ve watched and waited while the dust begins to settle, and we’re now confident we can bring you a list of the best MTG Arena decks in Standard right now. 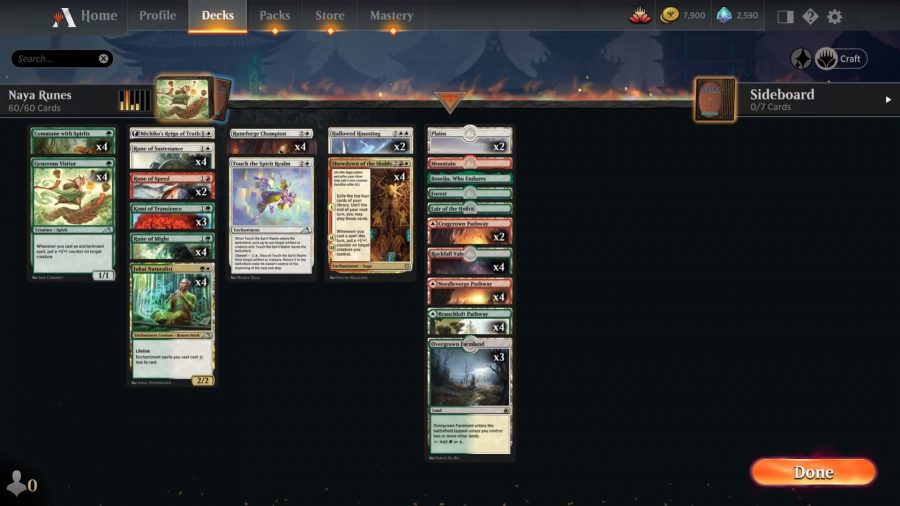 Kamigawa: Neon Dynasty’s enchantments are kicking up a storm on MTG Arena, with enchantment decks popping up all over the place in a kaleidoscope of colours. The Naya (that’s White, Red, and Green) deck is the spiciest of the lot, however.

It relies on rune cards from Kaldheim and a neat interaction between two creatures: Jukai Naturalist and Runeforge Champion. If you’re able to get both of those down on the battlefield, then all your runes can be played for free, which often leads to you throwing down five or six free cards in a single turn. And best of all, each rune spell cantrips, meaning it draws a card when you play it, ensuring you never run out of gas.

It’s not a problem if you can’t quite manage to make the most of the combo though, as Naya Runes decks can easily finish a game without it. They’re filled with efficiently costed creatures and effortless ways to buff them up, so most games will end with you piling on the +1/+1 counters and then barrelling down on your foe with a ginormous Kami of Transience. Free spells and mammoth creatures, what’s not to love? 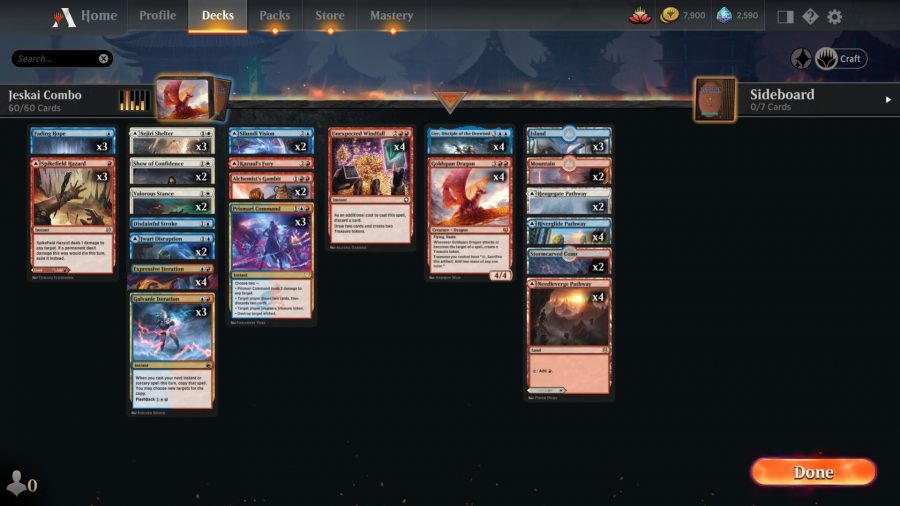 Red-Blue players are still stinging a bit after all their favourite cards were confiscated in the recent Standard ban, but the Izzet archetype is looking healthy nonetheless and may still be one of the best MTG Arena decks you can use. However, adding a splash of White into the mix creates an even nastier concoction, a spell-slinging combo deck that’s as much a blast to play as it is a nightmare to face.

With Jeskai Combo you’re relying on the treasure-making and damage-dealing capabilities of Goldspan Dragon, a very precious dragon indeed, and perhaps the best card in Standard, full-stop. In fact, half the reason White is in this deck is for protection spells that’ll keep your dragons alive and churning out that sweet, sweet, mana-making treasure. The other creature you’ll need is Lier, Disciple of the Drowned, whose inclusion gives all the spells in your deck Flashback, letting you play every single one of them from the graveyard. And with this deck that’s a lot of spells.

Follow the leader: How to build a MTG Commander deck

In fact, the entire rest of the deck is just Instants and Sorceries. Jeskai Combo uses a grab bag of all Izzet’s most irritating tricks: counterspells, extra turn spells, even spells that copy other spells. Once you’ve got enough treasures, you’re able to play an astounding number of these in one turn. Then, after you’re done faffing around, and once your opponent’s looking listless, you simply cast a Show of Confidence and wake them up by smacking them in the face with your Goldspan Dragon, who’s now the size of a house. At least you finish them by doing something flashy!

Despite the deck being extremely new to the Standard scene, Jeskai Combo doesn’t use any Kamigawa cards. In fact the key combo card, Show of Confidence, is an extremely unassuming spell from last year’s Strixhaven set, that probably never dreamed it would one day be the glue that holds together one of the best MTG Arena decks in Standard. A real rags to riches tale. 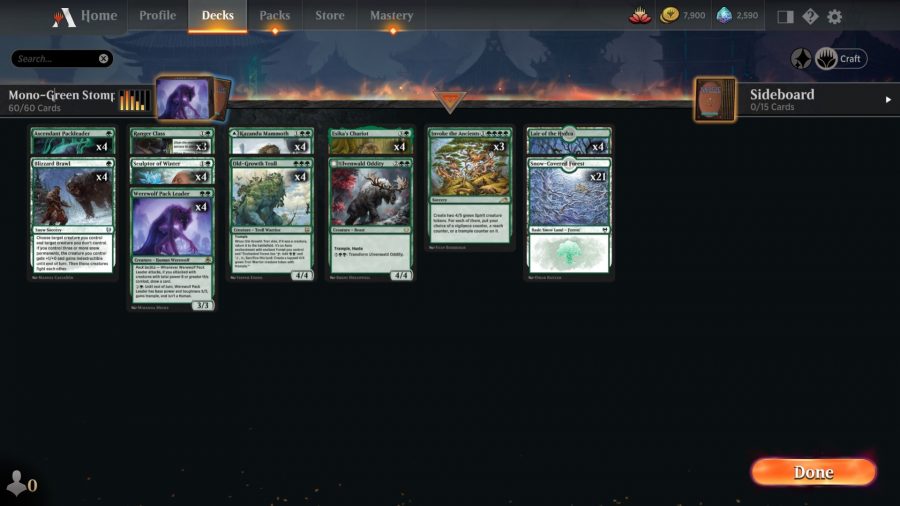 Okay, that’s enough clever stuff. Here’s a deck that’s been killing it in Standard for ages now and seems to have held its position as one of the best decks on MTG Arena by simply doing exactly what it’s always done: attack, attack, attacking with a load of top quality Green creatures. Your aim with Mono Green Stompy decks is to hit your opponent hard and fast, pulling into a commanding lead before they can muster a proper defence or – your worst nightmare – find a board wipe spell.

Back to basics: How to build a Magic: The Gathering deck

Stompy by name and stompy by nature, this deck starts aggressive right out the gate, and quickly snowballs out of control with value-generating cards: from the buffing capabilities of Ranger Class to the card draw of Werewolf Packleader. Some variants also use Green’s mana-ramping abilities as a way to stay ahead and get crucial creatures down on the field a turn early. Kamigawa: Neon Dynasty hasn’t given Mono Green Stompy many new upgrades to try – the main exception being Invoke the Ancients – but its card quality has been enough for it to maintain its place as one of MTG Arena’s best decks. 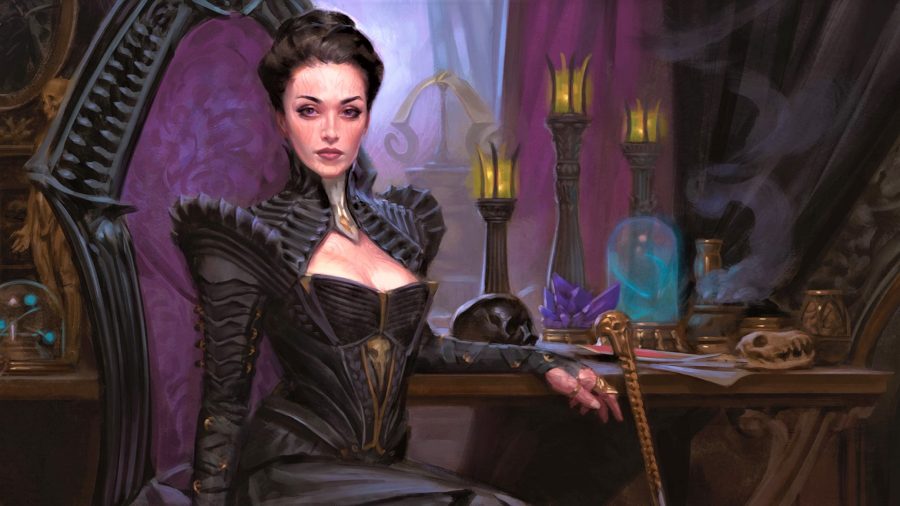 Another top MTG deck that’s stayed afloat amidst the rising tide of Kamigawa: Neon Dynasty, Orzhov (Black-White) Control has ranked among the best MTG Arena decks for a long time, buoyed by its flexible removal spells; arsenal of powerful planeswalkers like Lolth, Spider Queen; and unmatchable token makers such as Edgar, Charmed Groom. The colour-pair’s trajectory has only been maintained with the new set. The Wandering Emperor, for instance, is a frankly broken planeswalker. Its Flash ability makes it just a real pain to try and deal with and therefore a great inclusion for the deck.

Orzhov decks have thorny threats and all kinds of removal spells

Orzhov Control remains one of the best MTG Arena Standard decks because it can quickly establish its board presence and easily rebuild after suffering setbacks. It brings hard-to-remove threats such as Wedding Announcement to the table and on the flipside has all the tools it needs to nullify anything an opponent plays.

This is one of those decks that has a lot of different variants. Some lean hard into the token making side of things, while others pack in the planeswalkers. And with Kamigawa: Neon Dynasty, many players are now throwing in Blue mana too, in order to play another brand new planeswalker, Kaito Shizuki, a great card draw engine worth messing up your mana base for. These Esper Control players are also slotting in a bunch of counterspells, naturally.

These, of course, are only four of the many viable decks in play, but they cover a broad range of strategies and of course pack a whole lot of power. Try one of them out – your win rate will thank you for it.

Yet to dive into Magic’s expansive digital version? You can play Magic The Gathering: Arena for free right now. If you’re looking for more basic advice on building decks for different MTG formats, check out our beginner’s guide on how to build a Magic: The Gathering deck, or our specialist guide on building a commander deck.

There’s not a board game or TCG on the planet Niall won’t play, but he can most commonly be found hunched over his laptop, trolling MTG Arena with mill decks. Currently a freelance writer with credits from The Loadout and KeenGamer.