Kamigawa: Neon Dynasty will be the first Standard Magic: The Gathering set to release next year. Taking us back to the titular Japanese-inspired plane, which hasn’t been seen in an expansion set since 2005, Neon Dynasty will also be taking us to the future. Set more than 1200 years since we last laid eyes on Kamigawa, there’s a few more cyberpunk ninjas this time around.

With its neon lights, futuristic technology, and talk of ‘cybernetics’, Neon Dynasty is being billed as MTG’s first-ever science fiction set. So far, details are rather sparse, but we’ve already got an indication of what mechanics might appear, seen a new Planeswalker that will emerge, and, most importantly, know exactly when the set will hit shelves.

This is everything we know about Kamigawa: Neon Dynasty. If you’re after an overview of every MTG set that’s coming in next year, check out our guide to the Magic: The Gathering 2022 release schedule. Otherwise, grab that katana and switch phasers to stun, MTG is going sci-fi.

Revealed in a Wizards Play Network article (and later confirmed on the official MTG blog), Kamigawa: Neon Dynasty will release for tabletop on February 18, 2022, and will hit MTG Arena a week prior on February 10.

Kamigawa: Neon Dynasty spoilers will begin on January 27, while its prerelease event will run from February 11 – 17. Wizards has said they’ll be sharing more details, artwork, and a few previews of Neon Dynasty before the end of 2021.

Wizards has confirmed that Kamigawa: Neon Dynasty’s spoiler season will start on January 27, giving us a few weeks of previews and card reveals before the set’s full release. When those spoilers start coming in, we’ll keep you updated with the latest and greatest card reveals.

So far, we only know that the set will include a new ‘cyber-ninja’ Planeswalker called Kaito, and a past MTG character will return as Kamigawa’s ruling emperor. 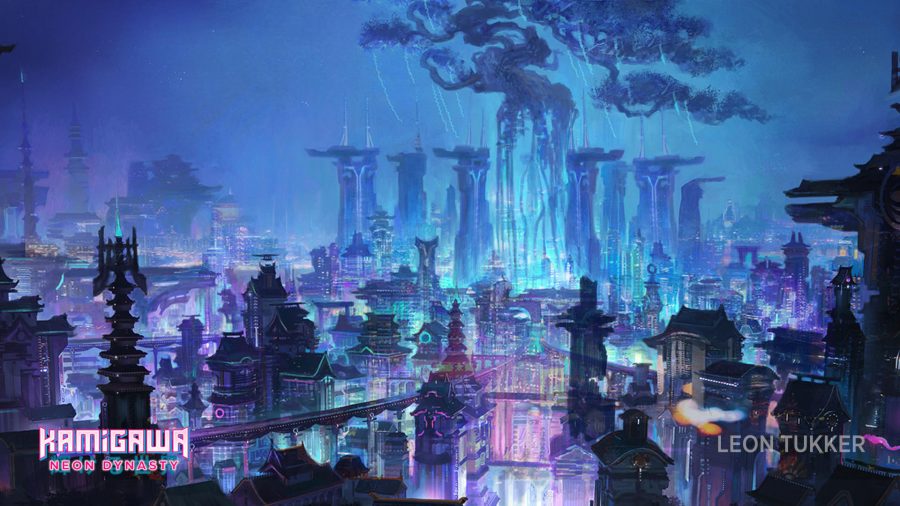 As well as adding new design elements, Neon Dynasty will reintroduce some mechanics of the first Kamigawa block with sci-fi themes. There’s a few that could likely make a return: some cards of the original set added Ki Counters to permanents, which could then be spent to perform special abilities; other cards played off your handsize, granting new abilities if you had a set number of cards, or scaling as your hand increased. Those mechanics might see an appearance.

However, there’s also a few mechanics that certainly won’t be coming back, such as Flip Cards. These two-in-one cards featured two stat blocks at either end, and could be rotated around to play their secondary creature when certain conditions were met. They’ve since been superseded by double-faced cards – many of which appeared in the latest Innistrad sets – and, according to MTG head designer Mark Rosewater, are considered to have been a failure.