Streets of New Capenna is the second Standard Magic: The Gathering set releasing  in 2022. Set in a new location, in an as-yet-undisclosed plane, it will sweep us to the gritty alleyways and glamorous locales of the titular metropolis. In a far cry from the usual MTG fantasy themes, expect to see lots of art deco architecture, film noir aesthetics, and a fair few demonic beings, as well as a suspicious absence of angels.

As we’re now racing along towards the set’s release, and the first spoilers have arrived, we’re able fill you on plenty of details about Streets of New Capenna’s factions, characters, cards, and story. To set the scene, we know it takes place in a city that was built by angels but has fallen to the grip of five demon crime families battling for street supremacy. The Planeswalker Elspeth Tirel has some special interest in the city, too, while the demon Ob Nixilis looks to be tied up with the gangsters as a shadowy ‘Adversary’.

We’ve rounded up everything there is to know about Streets of New Capenna. If you’ve already walked the city’s avenues and are after a broader overview of the coming year, read our guide to the MTG 2022 release schedule, or check out everything we know about Dominaria United. But if you’re new to town, prepare yourself for a life of crime.

A week of prerelease events will take place before that, beginning on April 22. As usual, there’ll be a few weeks of card previews in the run-up to the set’s release. While plenty of card spoilers have already been shown, officially spoiler season for Streets of New Capenna kicks off in full on April 7. 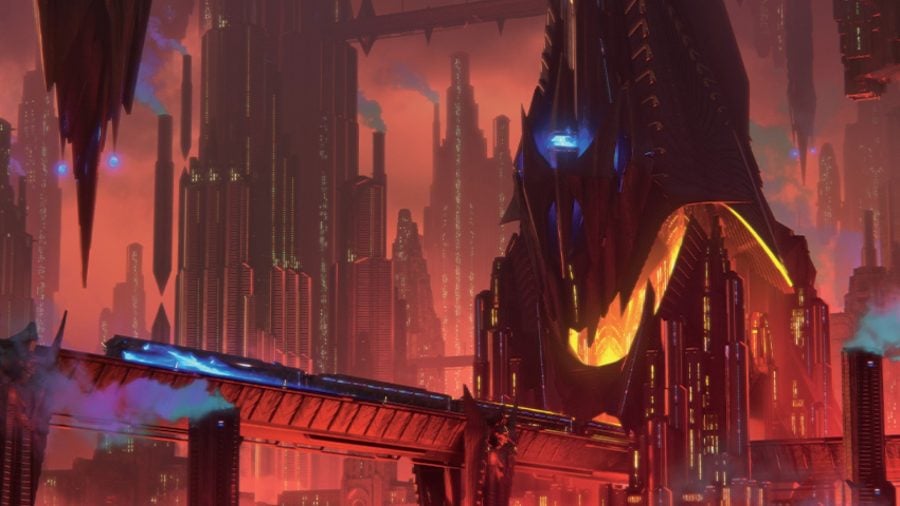 It’s time! As of April 7, Streets of New Capenna’s spoilers are arriving in force. Check out the Magic: The Gathering YouTube video below for the set’s “official debut”, exploring new mechanics, new cards, and revealing plenty of fresh details about the world of Streets of New Capenna.  After that you may want to glance at Wizards’ preview schedule, where the dozens of sources for MTG spoilers are listed. Previews will be coming thick and fast from April 7 until April 14, and Commander previews for Streets of New Capenna will also be unveiled on April 14. 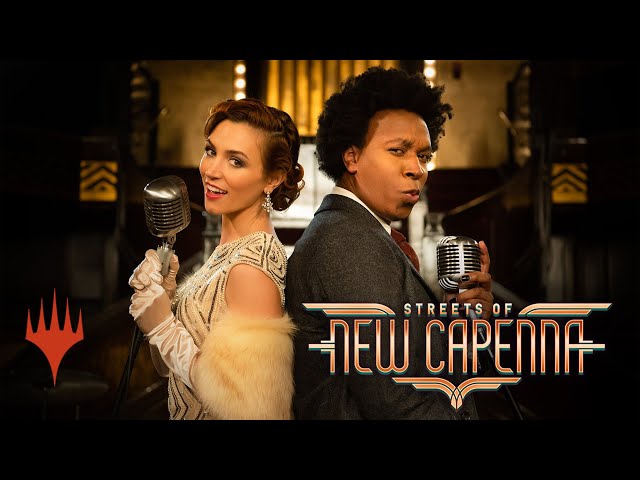 Wizards has already released plenty of card previews prior to spoiler season to whet our appetite. Most recently they’ve shown us three of the five legendary demon creatures that lead New Capenna’s crime families. They’re probably the most exciting cards we’ve seen so far, so let’s cut to the chase and show you them right away. 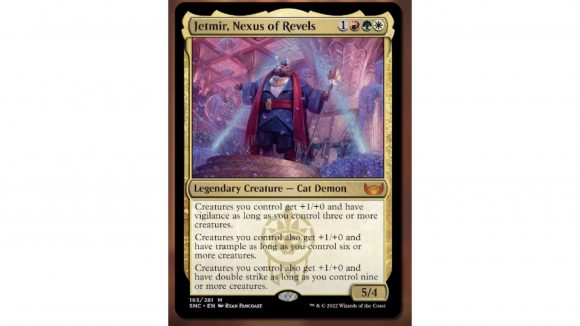 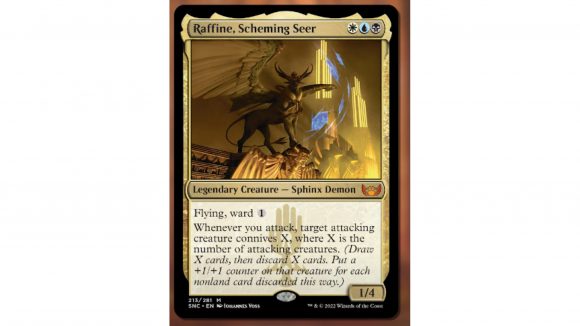 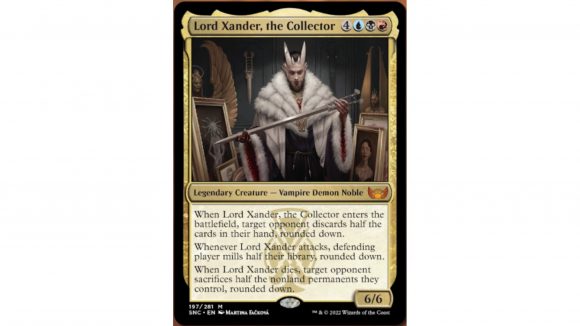 A cycle of Instant spells were also among the latest MTG spoilers, with five Charm cards, one for each Streets of New Capenna faction.

Other Streets of New Capenna spoilers include full-art land cards, a cycle of three-colour triome lands, and a new enchantment card, Brokers Ascendancy.  These were all shown off in a Weekly MTG stream on March 3. 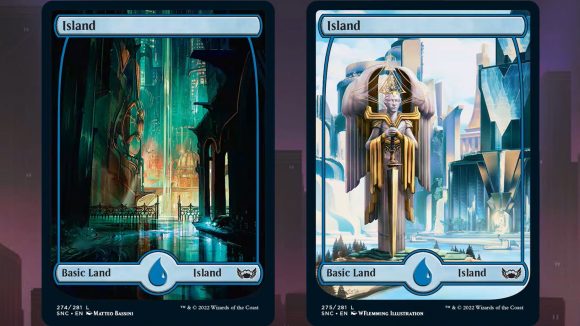 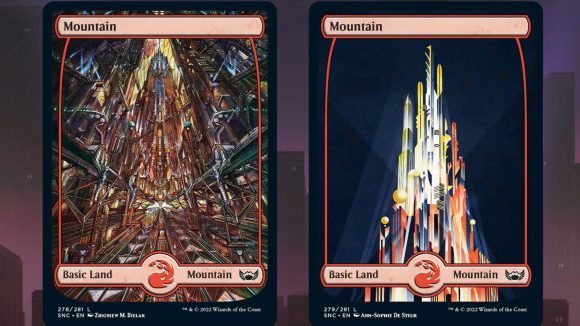 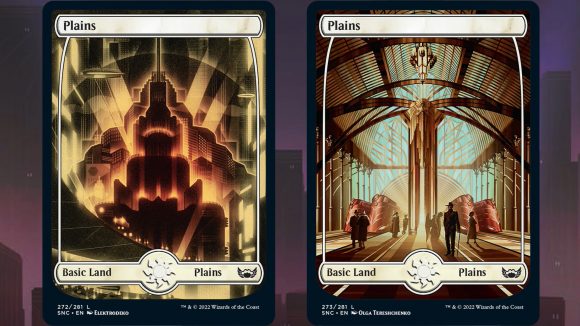 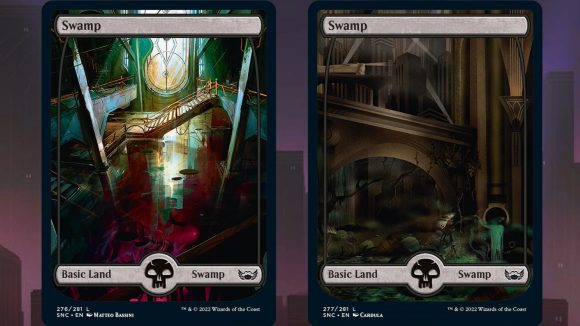 It’s worth taking a long, hard look at these gorgeous basic lands, shown on March 3, which reveal the city of New Capenna in more detail, and display the art-deco influence on the set in full glory. Each one is swimming in gold panels and strong lines, gleaming glass and stark concrete. As this appears to be an entirely urban setting, much like Ravnica, there are no Islands, Plains, and Swamps, as such, just waterfronts, stations, and sewers. 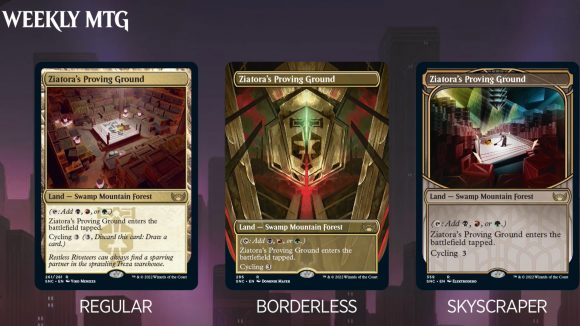 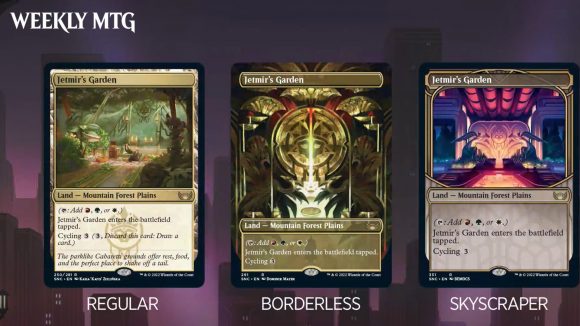 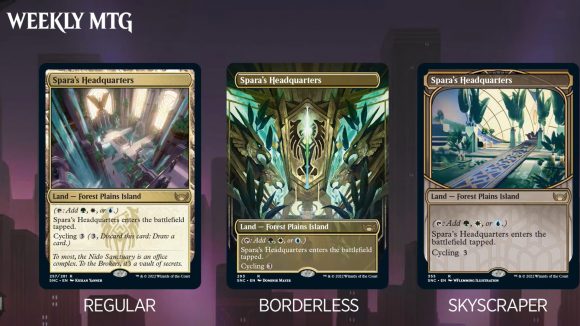 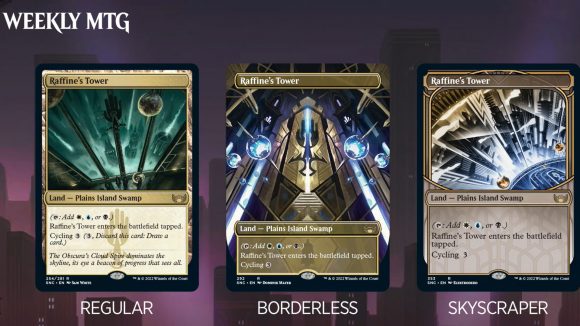 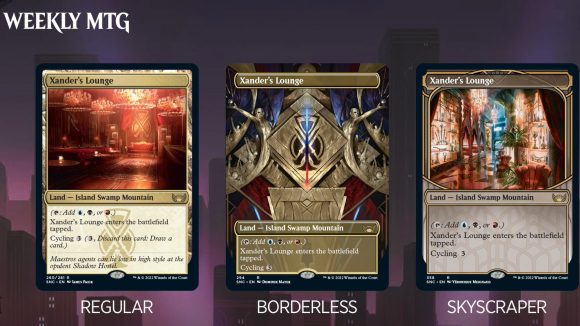 Moving along to the five triomes, these three-colour lands match up with the five three-colour crime families that hold New Capenna in their grip (more on them below). Each one depicts a location of importance to its family, from Xander’s Lounge for the Maestros, to Raffine’s Tower for the Obscura. As you may have noticed, each one also features the name of its family’s demonic leader. 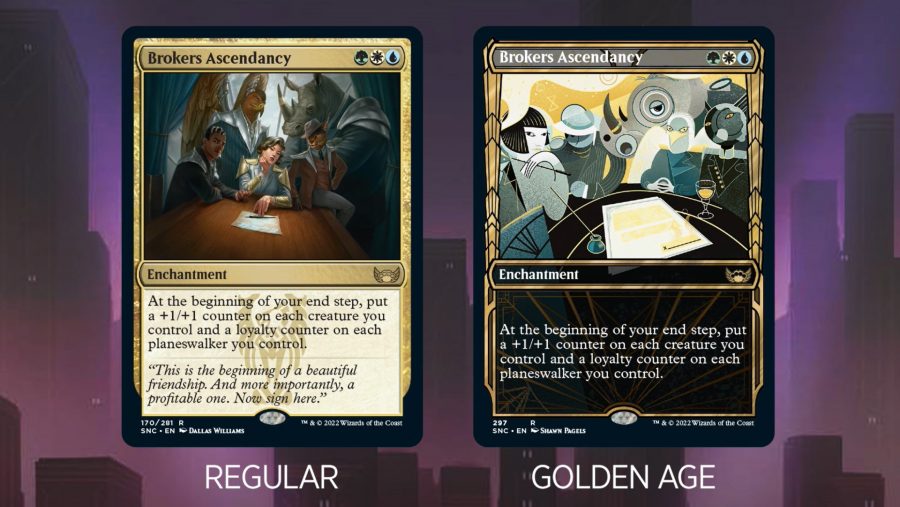 Then we have Brokers Ascendancy, an enchantment card for the Brokers family, a law firm that’s even more shady than most. We previously saw ‘Ascendancy’ enchantments in the 2014 set Khans of Tarkir, which, like Streets of New Capenna, focused on three-colour wedge factions. It’s pretty much guaranteed that the other four factions in New Capenna will get ‘Ascendancies’ of their own. Check out the cubist ‘Golden Age’ version of the card. More of those please Wizards. 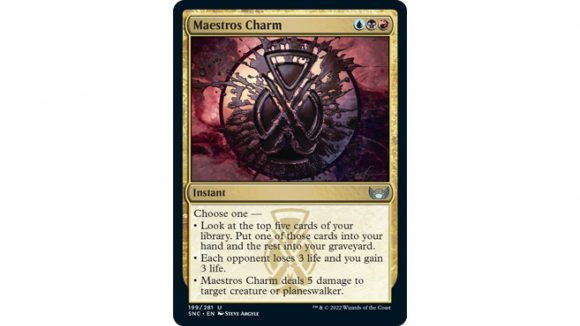 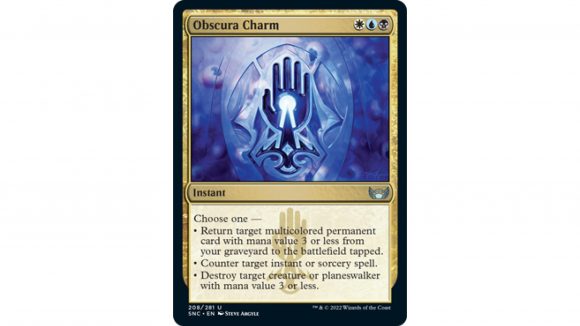 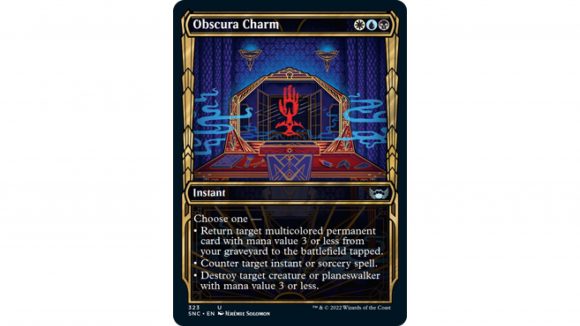 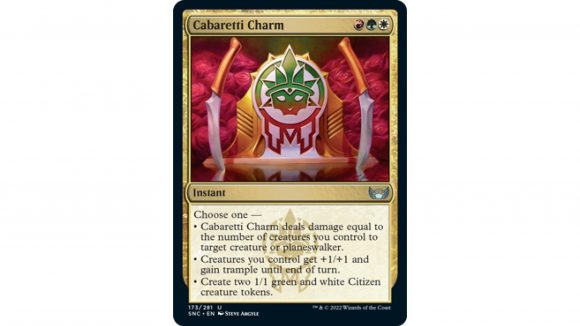 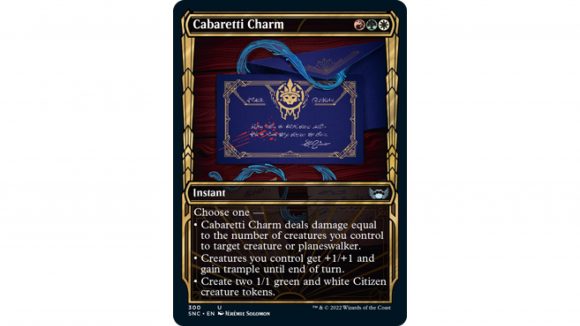 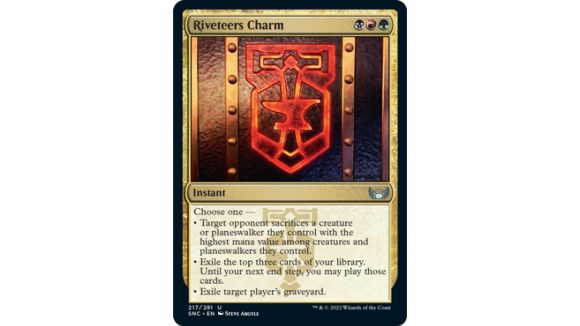 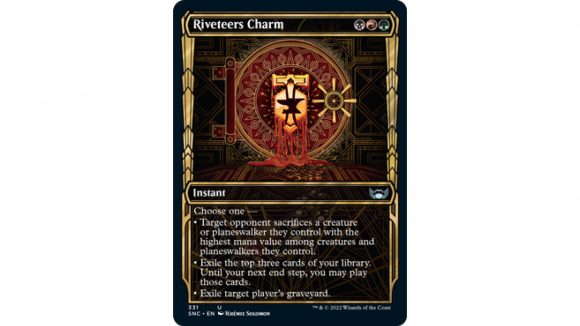 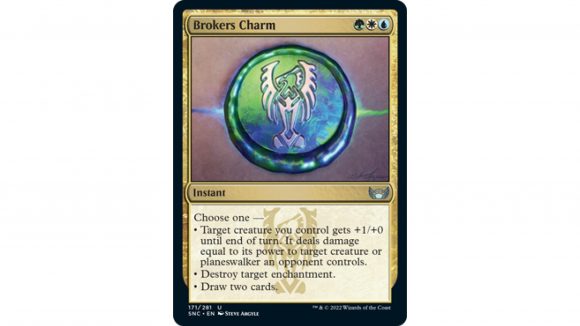 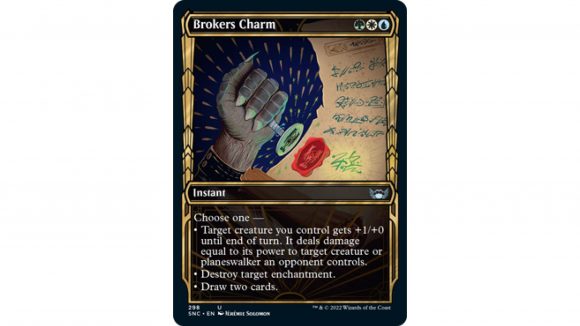 One last, recent reveal is Charms, Instant spells which have three different possible effects. Charm cards are designed quite regularly in Magic, typically appearing in MTG sets with multiple factions. We’ve now seen the lot of them: Maestros Charm, Obscura Charm, Cabaretti Charm, Riveteers Charm, and Brokers Charm. That’s one for each faction, so it seems Streets of New Capenna will have at least two three-colour cycles: a cycle of rare Ascendancy cards and one of uncommon Charm cards. 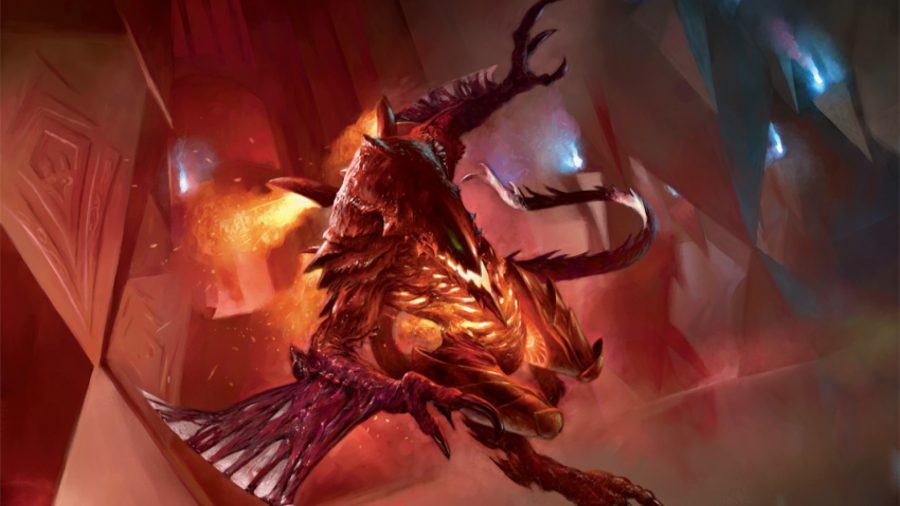 The demonic Planeswalker Ob Nixilis has become involved with the crime families of New Capenna, and seems be a major villain in the release. In the first chapter of Streets of New Capenna’s story, the crime family leaders speak of an ‘Adversary’ gaining in power and influence. This turns out to be Nix himself, who seems to be on the warpath, promptly offing one of New Capenna’s faction leaders, Xander, in Chapter 4 of the set’s story.

The city of New Capenna is said to be of special significance to Elspeth Tirel, who also features in the Streets of New Capenna story. As does Vivien Reid, who’s dislike of civilisation makes her quite the unlikely fit for an entirely urban set.

Chapter 3 of the story puts Vivien in the company of the villainous Tezzeret and the Phyrexian Praetor Urabrask. Now that we know Wizards isn’t above compleating Planeswalkers, this obviously puts her in quite the precarious situation. Though, Urabrask is supposedly quite pleasant for a Phyrexian, and says he won’t turn her into a cyborg. We’ll see.

As of April 7, Elspeth, Ob Nixilis and Vivien have new Planeswalker cards confirmed and fully revealed for Streets of New Capenna. A Tezzeret card is also a possibility, though less likely, as he only just had one, appearing in Kamigawa as Tezzeret, Betrayer of Flesh.

The Phyrexian Praetors, Magic’s latest villains, have been appearing one by one in recent sets, and Streets of New Capenna, unsuprisingly, gives Urabrask a new creature card. This is the first new card for this character since Urabrask the Hidden was printed in 2011, and the third Phyrexian creature to show up in Magic since early 2021. We’re definitely building up to a Phyrexian showdown of some kind. 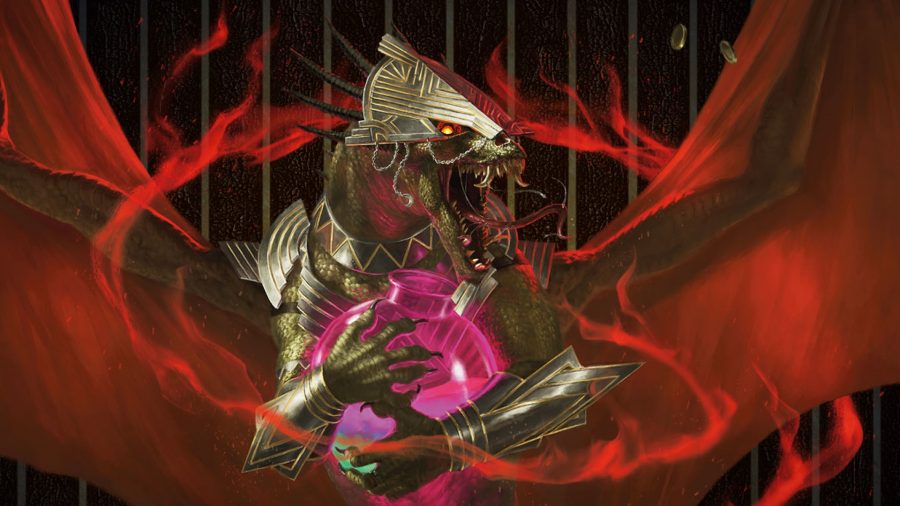 Streets of New Capenna will focus on the (wrong)doings of five factions, five crime families: each of which is associated with three colours and will have its own keyword ability. Thanks to the March 3 Weekly MTG livestream (and a bit of detective work – how fitting) we now know a fair bit about them.

Like the city of New Capenna itself, whose gleaming buildings bely a seedy underbelly, each family has a respectable front disguising its criminal activities. 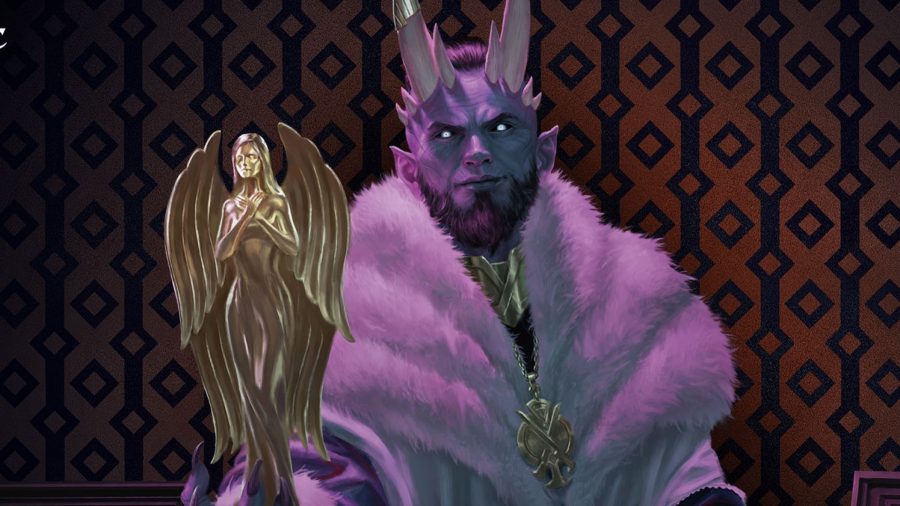 First up, we have Obscura in White, Blue and Black. This family is full of gifted mystics who are all about surveillance, and who use illusions to maintain a façade, while scheming in plain sight.  As far as we can tell from the set’s marketing material, their leader, Rafinne, is a demonic sphinx. According to WPN, their Commander deck, ‘Obscura Operation’ is for “players who love strategising and saving their big reveals for later in the match”. As with the rest of the faction Commander decks, it’ll be released on April 29.

Then there’s the Maestros, in Blue, Black, and Red. These are assassins, “old money vampires” according to the stream, who maintain a front as art aficionados, sponsoring culture and the arts, but are happy to kill to maintain their luxurious lifestyles . There’s no hiding their leader, Xander’s demon side, since he’s got glowing eyes and giant horns. He’s also half vampire. Official artwork  for Streets of New Capenna shows planeswalker Ob Nixilis standing over his slumped body, suggesting Xander may not be long for this world. The Maestros Commander deck ‘Maestros Massacre’ is all about winning “no matter the cost”. 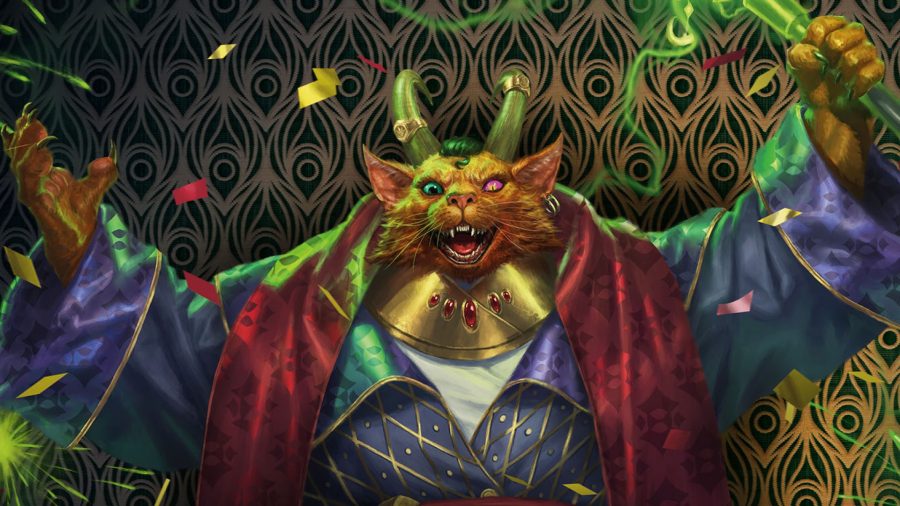 Cabaretti, in Red, White, and Green, are druids who are the life and soul of the party. They’re all about feasts and fun, keeping the ‘Halo’ (a powerful magic substance) flowing, though they apparently use their magic to stay on everyone’s good side. All that fun comes at a cost, and it’s said if you can’t afford to pay “you might find it hard to leave.” Their leader, Jetmir, is a portly cat-person. Also a demon, of course. The Cabaretti Cacophony Commander deck is for players who like to “play loads of low-cost creatures”.

Next up, the Riveteers. They’re Construction workers and artisans, though they’re also pretty good at knocking things (and people) down. In Black, Red, and Green colours, this is the rowdy and rough, brute force family. Apparently, they’ve used their gifts to turn the lower city levels into a gigantic lair for their dragon-demon leader, Ziatora. The Riverteers Rampage Commander deck focuses on “high-speed, hard-hitting attacks”. 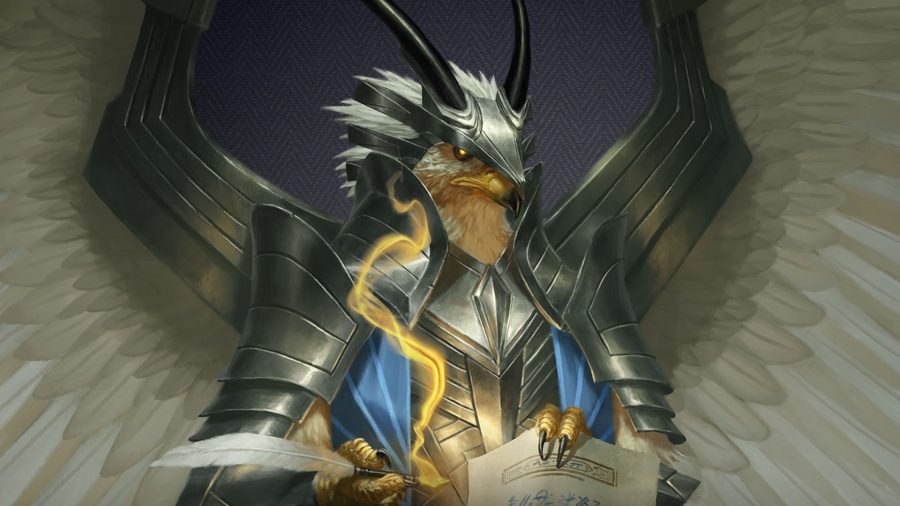 Which brings us to the Brokers in Green, White, and Blue. We already saw a glimpse of their antics in their Ascendancy card. A demonic law firm, with aggressive, tireless solicitors, they’re also followers of a doomsday prophecy, believing the city will fail “when the Halo dries up”. Until then, they’ll be looking after their own, as suggested by their defensive Commander deck ‘Bedecked Brokers’. Oh and they’re led by a bird demon, Spara.