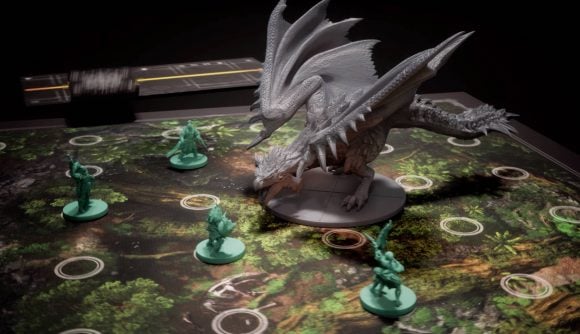 Gameplay details for upcoming miniatures game Monster Hunter World: The Board Game have been revealed by publisher Steamforged Games. Following a short teaser trailer on Saturday, and the announcement that the tabletop adaptation of Capcom’s 2018 titular video game will be available on Kickstarter from April 20 to April 30, a blog post on the publisher’s website revealed more details of the game’s hunter mechanics, turn phases, and combat gameplay

Aping the gameplay loop of its inspiration material, Monster Hunter World: The Board Game will have the player take the role of a hunter, gather resources, track beasties, team up with other players for support, and loot their prey for trophies, while crafting new weapons and upgrading their character. Gameplay is split into three phases: a gathering, hunting, and final HQ phase. Steamforged has as of yet only released details for the hunting phase, in which you’ll attempt to slay your target monster.

Played across a central game board split into a grid of positional nodes, combat functions like other tactical, card-driven tabletop games. Players draw cards from their personal attack deck to move across the board and perform actions, while leveraging powerful modifiers, such as stun effects, to better strike their target beast’s vulnerabilities. A separate damage deck is used to determine the wounds caused by landed attacks, while each attack drains your characters’ limited stamina pool, requiring you to recover before making further harries.

Unlike the video game, hunters possess unique traits and particular fighting styles, influencing their attack options and dictating their weapon choices. Managed on a personal ‘stamina board’, each hunter receives a particular attack deck, containing attacks and special moves, and a damage deck unique to their hunter. As you progress through the game, you’ll be able to craft new weapons to enhance your decks with more powerful cards. 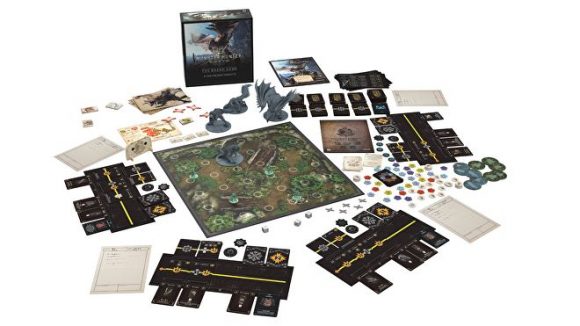 A teaser trailer released on Saturday revealed glimpses of the game’s board and some of its gigantic miniatures, including those of fan-favourite monsters Rathalos, Great Jagras, Tobi-Kadachi, and Anjanath. You can watch the teaser trailer over at Dicebreaker,

Hitting Kickstarter from April 20 to April 30, the campaign’s first pledge level will offer an entry-level set for $70 / £51, netting you four hunters to play as, four monsters to slay, and the Ancient Forest biome board. The next tier will cost you $140 / £102 and include additional content that doubles the game’s campaign length, and a total of nine monsters and eight hunters. A final option will provide 24 miniatures and more content to push the campaign length up to 75 hours, costing £279 / £203 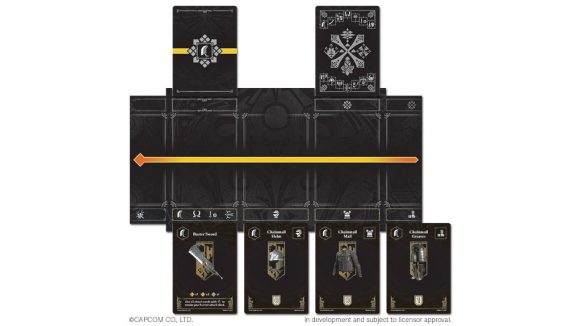 Steamforged Games are old hands at adapting video games for the tabletop, releasing a Horizon Zero Dawn board game last year, a Resident Evil 2 tabletop adaptation in 2019, and a Dark Souls board game in 2017. They’ve also produced titles using original licenses, such as the streamlined fantasy skirmisher Godtear and their line of TTRPG encounters-in-a-box Epic Encounters.

If you can’t wait until Monster Hunter’s release to start some epic tabletop fighting, read our guide to getting started with the Gloomhaven board game – that other giant of the tabletop.