Petersen Games, the board game design studio best known for Lovecraftian miniatures strategy game Cthulhu Wars, has announced four new monster-themed board games coming to crowdfunding platform Gamefound next month. Petersen announced in a February 14 blog post it would release the four titles – Invasion of the Brood, Evacuate, Potions & Profits, and Marry the Monster – in a ‘Monster Invasion’ project on March 9.

Petersen Games says all four board games of Monster Invasion have already been manufactured and shipped to their warehouses.

The four games play independently of one another, and have been created by different designers. Petersen Games says they each bring distinct gameplay based on varying themes – although all feature some monstrous motif. Each also appears to sport the same cartoonish, miniatures-focused gameplay that made Cthulhu Wars so popular.

Invasion of the Brood is an asymmetric, two-player strategy game. One of you will take the role of the extraterrestrial, telepathic Broomaster Magnalux, and must use this alien beast’s mind control powers to weaken and subvert earth’s defences before conquering its territory. The other player defends the earth, uniting its military forces against the alien threat. Petersen Games says the two factions boast distinct abilities, strategies, and turn structures.

Evacuate is a combined deck-building and social deduction board game for two to six players. You’ll be rushing to evacuate a spaceship and evade the invading alien forces, leading your crew to the last escape pod before your opponents fill all the available seats. 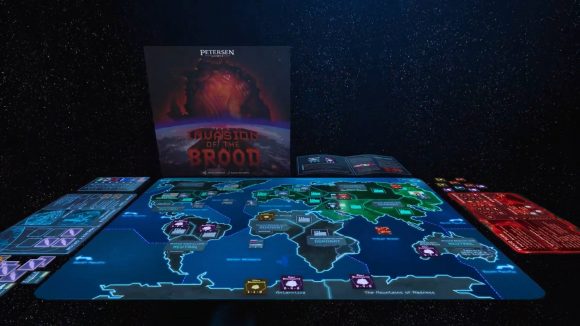 But not everyone is safe. Stay in front of other survivors to reach safety first, but open yourself up to enemy surprises. Stay at the back and you could be picked off. You’ll be trying to secure the safest position and outwit the other players to trick them into securing your own crew.

Potions & Profits has you assume the role of a corporate Wizard, investing in new brews to earn a healthy profit for your investors. Three to six players will be competing to invest in the most profitable potions, balancing profiteering with ethical obedience, to avoid any troublesome protesters putting an end to your concoctions. You’ll be balancing shareholder satisfaction with public relations [fingers crossed for a cauldron-exploding mechanic – Ed.].

Marry the Monster revolves around a love-stricken beast, for whom you must find a partner, in order to put an end to its lovesick terrorising and keep the local villages safe. A competitive game for three to five players, you’ll each pick cards to construct buildings across the game board, trying to create a false bride for the monster and trick him into romantic submission. The first player to successfully subdue the monster – before it can destroy your constructions and put a halt to your bride-making – wins. 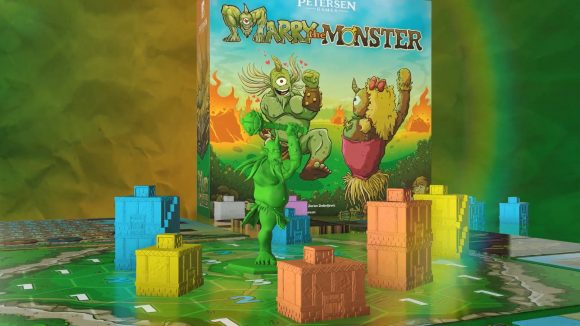 Petersen Games was founded by veteran board game and videogame designer Sandy Petersen, who created the classic 80s tabletop RPG Call of Cthulhu, and developed the original Arkham Horror board game, as well as working in the design teams behind videogames like Age of Empires, Civilization, and Doom.

If you’re keen to expand your board game collection, but can’t wait until March 9 to grab these games, read our guide to the best board games for adults.