Order of Battle: World War II has long since cemented its position amongst the greatest of the Panzer General Successor games, alongside Unity of Command and Panzer Corps. With the amount of quality DLC covering interesting campaign after interesting campaign, the more popular and more obscure both, I’m happy to see that Slitherine and developer The Artistocrats continue to do what they do best with the latest release: Allies Defiant.

Now, right out of the gate: If you’ve played Order of Battle: WWII and have decided that you’re not a fan, there is very little in Allies Defiant that will change your mind. This is decidedly a ‘more of the same’ DLC that isn’t trying to reinvent, nor even realign the wheel. You’ll recall that they did that back when the base game launched back in 2015.

But for those who are on the fence, perhaps new to the venerable subgenre of wargames following the august example of 1994’s Panzer General, or if you’re a fan of the series and simply looking to see what Allies Defiant adds to the mix, read on!

There is a lot to love in this latest DLC, but there are also a few foibles that might stay an uncertain hand. 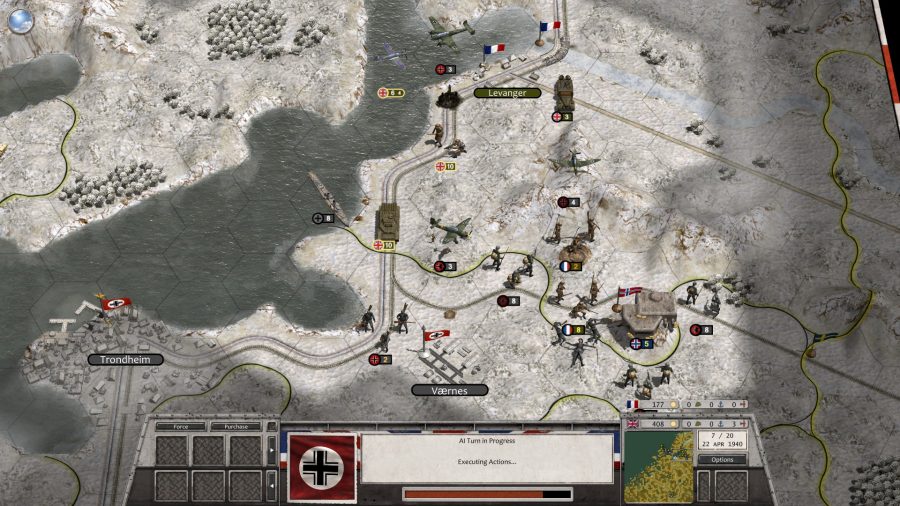 First of all, what are you getting when you purchase Allies Defiant? The campaign is the first in a planned trilogy that follows the western allies – primarily the British so far – through the entire second world war. This first entry focuses on the battles fought as allied forces contended with Germany’s rapid expansion at the outset of the war, from 1940 to 1942. The missions take players from Norway, through the low countries, to North Africa and the Balkans.

buy and upgrade a core army that travels from mission to mission, gaining experience points

There is a lot of ground to cover, and interesting and seldom-gamed scenarios sit side by side with popular engagements like Dunkirk and El Alamein. Playing through the campaign follows the basic Panzer General formula. Players buy and upgrade a core army that travels from mission to mission gaining experience points. This core army is joined at each step by other units that exist only for that mission (the tragic expendables). Each mission tasks the player with several objectives, some required and some optional, but with goodies that encourage going after everything. Gameplay revolves around manoeuvre, and the correct application of the correct unit.

With a relatively abstract system of units representing specific tanks, infantry squads, ships, and aircraft, Order of Battle gives players everything they need to know where and how to best use their units. Judge the terrain, the enemy’s capabilities, scout appropriately, and move your forces to best inflict damage, while minimising your own. It’s an excellent system that has stood the test of time for a reason. 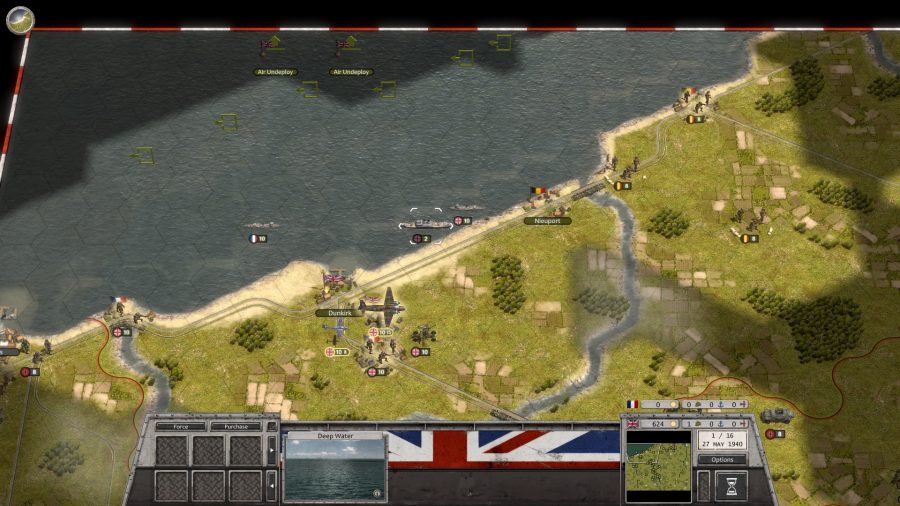 This does mean that the usual grumbles for this kind of game are still present in Allies Defiant. Each mission begins the same, and any twists – like ‘unexpected’ flanking moves – will happen right on schedule. This means that missions can be seen as a puzzle, where the correct formula of moves can be taken to win most effectively. Random combat damage helps minimize this effect, but the puzzle threat is still there. It’s just a persistent concern with these types of wargames.

The Campaign progression itself is quite entertaining, with good mission variety and changes of scenery every few battles. It is good fun to be able to play out the invasion of Norway, the escape at Dunkirk, Mediterranean naval engagements, and Greece. Individually they’re all quite well made, though some – like the later North African missions – can ramp up in difficulty.

Tanks, bombs and hexes: These are the best WW2 games

As with all scripted scenarios, there is not much these missions can do to react well to player achievements. For instance, I handily stopped the German advance into Belgium in the second mission. The last few turns were spent watching Belgian and German artillery trade fire over Antwerp. Yet the next mission, invariably, is the desperate defence around Dunkirk.

This is a recurring issue and, to be fair, I’m not sure how one would solve it within the parameters of a DLC pack, but it is amusing (in a grumpy sort of way) to see the game take my victory and hand me a desperate near defeat. 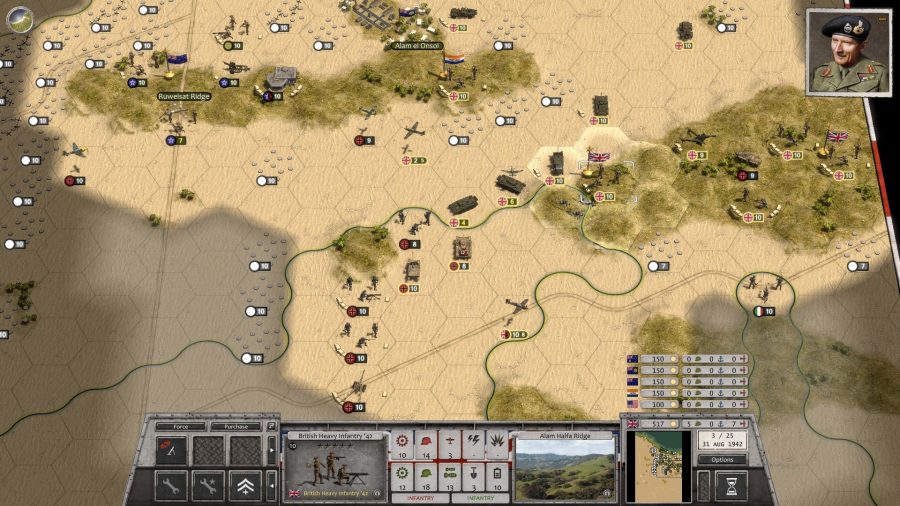 Many series fans particularly like that each new DLC adds new units to Order of Battle’s gigantic stable, and, while there are new units in Allies Defiant, there’s only a handful. The Hawker Hurricane Mk. IID and towing tractor Scammell Pioneer are stand-outs. But don’t expect piles of new tanks. Most of the British staples are here, though.

This seems like a missed opportunity for a French campaign

Another potential downside is that Allies Defiant stays true to its British focus throughout. While you will control French and commonwealth forces throughout the campaign, they are subordinate to your British core army, and you can’t properly expand their forces.

I personally would have liked to see more attention given to the Commonwealth, French, and Belgian forces, but I understand that this trio of campaigns is meant to focus on Britain. Still, I wonder if there’s room enough for a future French campaign? This did seem like the appropriate opportunity for a deep dive into their battles and I’m sorry that didn’t materialise.. 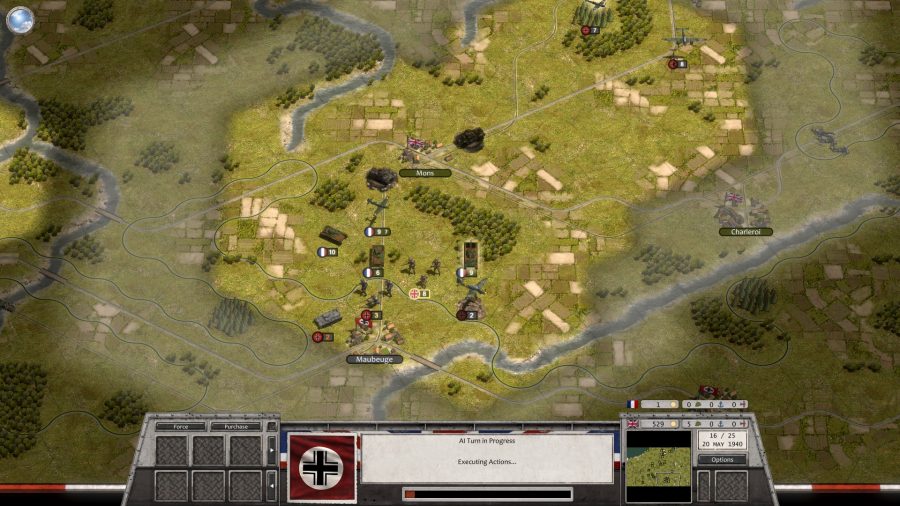 Yet the focus on the British is welcome, as many scenarios and campaigns in Panzer General-type games do tend to focus on…well, panzers. Taking control of a losing force as it struggles to maintain any kind of position is often more thrilling than running down Poland for the millionth time, so I’m glad that Allies Defiant is as entertaining as it is.

If this is your first look at Order of Battle and you’re interested in the conflict presented here, I feel that Allies Defiant is a decent entry point to the game’s paid campaign packs (the base game, of course, is free to play).

Great powers collide: These are the best WW1 strategy games

There is so much good DLC for Order of Battle that the best advice would be to follow your heart and pick an expansion pack that includes a campaign you’re interested in. The mechanics are solid, the gameplay is as strong as it’s ever been, and the missions are entertaining, toeing the line quite well, near the end, between difficult and frustrating.

This is an entertaining DLC pack for Order of Battle, and I heartily recommend that any fan of the series hop on board. I’m looking forward to seeing what comes of the trilogy and where Slitherine and the Artistocrats go from here.

Order of Battle WWII: Allies defiant released on January 28, 2021 and is available now on Steam.