Publisher Fantasy Flight yesterday revealed more details about the upcoming Phoenix Cell Squadron Pack for Star Wars: X-wing. In a blog post, the firm announced the expansion, which includes two A-wings and a B-wing starfighter, will come with many familiar Star Wars pilots – such as Ahsoka Tano, Wedge Antilles, and Hera Syndulla. We also got more details on some of the included upgrade cards, such as a new Rebel faction-specific card, and a gunner variant for everyone’s (third) favourite Mandalorian warrior, Sabine Wren.

Of the pilots, the star of the show is Hera Syndulla. Capable of piloting both the A-wings and B-wing she comes packaged with, Fantasy Flight says she is intended to play as the leader of the squadron, providing buffs allied ships. She comes with a new pilot ability (different from that included in her pilot card for the VCX-100 Ghost) which allows her to transfer a focus, evade, or lock token to an allied ship at close range when it performs an attack or defensive action.

Besides Syndulla, the Phoenix Cell pack contains other well-known Star Wars heroes to pilot the A-wings, including Wedge Antilles, recurring rebel fighter of the original trilogy – and, let’s be real, the true hero of the rebellion – who reduces the number of defence dice his targets may roll; Shara Bey, of the Star Wars comics, who may sacrifice a lock on the enemy for an added focus to their dice roll, Derek Klivian, who can remove one red token after acquiring a lock; and fan-favourite Ahsoka Tano, who can channel the force and provide extra actions to her allied ships, even when they’re stressed.

Fantasy Flight says the design intention is for these abilities to be chained mid-dogfight. Syndulla, for example, can transfer a lock token to Klivian to deplete his stress, or to Antilles to double the deadliness of his attacks, or to Bey, who may then sacrifice the token to increase her focus. 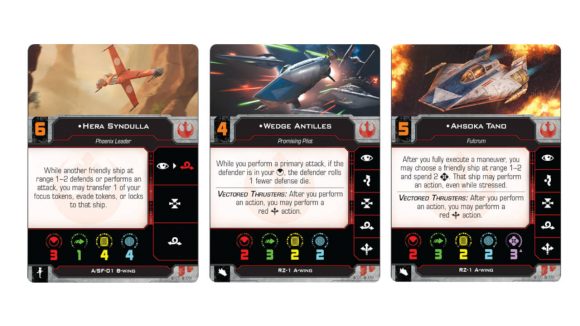 Alongside the pilots comes the usual helping of ship upgrade cards, including ‘Vectored Cannons’ for the A-wings, allowing them to rotate their cannons to the rear. Pair it with the new ‘Starbird Slash’ upgrade that adds a stress token to any ship you pass through on your manoeuvre, and you’ll make an enemy vessel nice and vulnerable to those rear cannons now staring behind you, directly at the enemy’s face.

For the B-wing, Fantasy Flight revealed the ‘B6 Blade Wing Prototype’ card, which retrofits the B-Wing to carry a gunner slot – perfect for the new Sabine Wren gunner card, which allows you to remove strain tokens from nearby ships after carrying out a successful special attack.

The Phoenix Cell Squadron Pack also includes a Rebel faction-specific upgrade card, ‘Hopeful’, which buffs your ships with an extra focus or boost action whenever a nearby allied ship is destroyed. The idea is to ape the uplifting hope of the Rebellion, who are spurred on to fight for freedom after the deaths of their comrades. It also nicely feeds into the A-Wings’ existing proximity buffs. 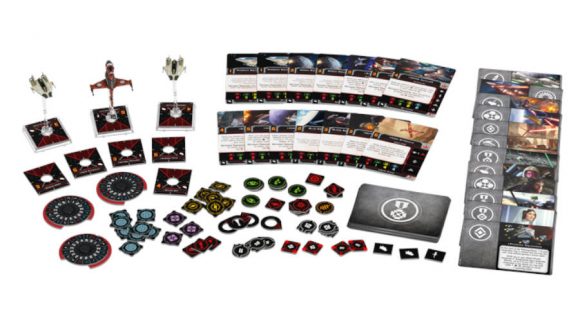 Finally, the ‘Phoenix Squadron’ command card allows the VCX-100 Ghost (of the Ghost expansion pack), to form a mixed formation with supporting starfighters, like the A-wings. When formed up, the A-wings can block fire to the Ghost and accompanying Sheathipede-class shuttles, absorbing damage to the formation, potentially sacrificing themselves, but creating a bulky, ablative wing of ships that’s difficult to cut down.

Elsewhere in the blog post, Brooks Flugaur-Leavitt, a designer on Star Wars: X-wing, said they had approached the new squadron packs as “an opportunity to reinforce the narrative and mechanical themes of X-Wing’s original factions.”

“More than just new content, my goal was to create abilities that evoked emotions associated with Star Wars, while also immersing players in the game as a shared story, not just a challenge of skill.

“When designing the new faction talents, I struck upon ‘Hopeful’ and its game mechanic first.  Hope in the darkness is a recurring theme for the Rebel Alliance, and the stories of Rogue One and the Original Trilogy lent themselves readily to a mechanic that triggered after another friendly ship was destroyed. ” 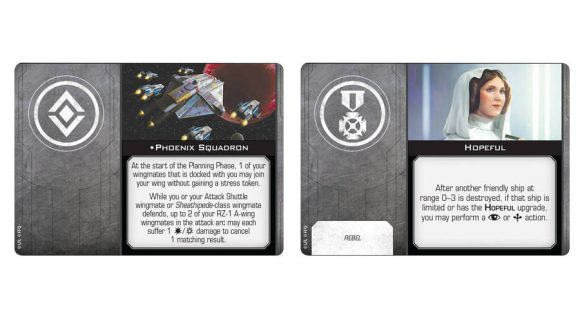 The Phoenix Cell Squadron pack was first announced in a Twitch live stream earlier this month, and will be released alongside two other X-Wing expansion packs: Skystrike Academy for the forces of the Empire, and Fugitives and Collaborators for the Scum and Villainy faction line. We’re set to see details for the contents of these packs soon, and we’ll keep you updated with news as it comes up.

For now, why not have a read of our guide to the best Star Wars board games, and find what other tabletop treats might tempt you back to a galaxy far, far away.