Stellaris: Infinite Legacy will mimic much of the core gameplay of the original PC game, with players designing their own species of alien, and picking their empire’s starting traits, ethical principles, and government doctrines before setting out to expand their territory and jurisdiction on a galactic map.

Designed as a 4X board game, expect to explore new solar systems and their extraterrestrial denizens; expand your empire across worlds, while developing your technological progress and resource economy; exploit other players and non-player races you encounter through a diplomacy system, while forming alliances, subjugating others into vassalages, and designing trade agreements; and, of course, exterminating those who cannot be subordinated peacefully, while launch military campaigns to occupy and slaughter troublesome worlds.

Although designed to be played in fast-paced sessions lasting only a couple of hours, the board game includes ‘legacy’ aspects of gameplay – mechanics that influence how the game is played over time, and introduce new components of play. You’re encouraged to continue playing the same empire across multiple gaming sessions, expanding its territory, advancing its technology, and discovering new mechanics as their introduced in later sessions. The idea is to progress the history of your galaxy organically through a non-linear storyline, impacted by player choices. 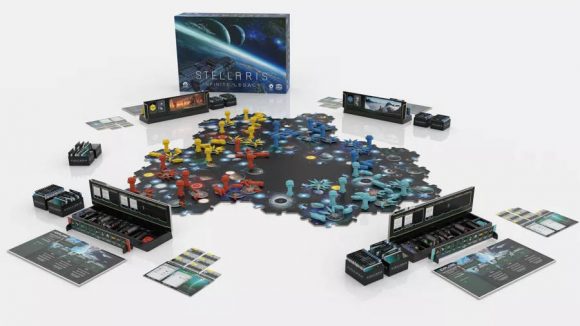 Empires can also be abandoned if you’d prefer a fresh start to your galactic conquest, but old dominions remain in the game as Fallen Empires, passively influencing the storyline of future sessions. Academy Games says new players can join the game at any time, with events and victory conditions scaling to accommodate the various development levels of players’ empires.

However, unlike other legacy board games, such as the Pandemic Legacy series, mechanical additions and changes to Stellaris: Infinite Legacy are tracked non-destructively, without the need to destroy components of the game when changes are made. You can replay the game from the very beginning, resetting all galactic development made across previous sessions.

“If you destroy a planet, you could be marked with a key that will make future contacts with other civilizations very difficult, since the word of your actions may have leaked out.”

“But then you may take a future action that pins the blame on another civilization, again altering the storyline and emanating gameplay. So each decision does have a legacy effect, but without destroying game components.” 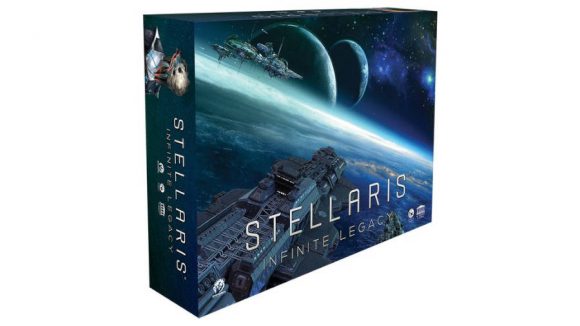 Academy Games says the upcoming Stellaris board game is the first in a series of ‘Infinite Legacy’ titles, each carrying the same non-destructive, replayable legacy gameplay mechanics.

The original Stellaris PC strategy game released in 2016 by Paradox Interactive. Although possessing a larger 4X strategy component than Paradox’s other grand-strategy titles, it boasts the same scope of empire-building, as players develop their infrastructure and armies in pursuit of galactic domination.

Like the sound of galactic domination played out across nuanced, complex strategy mechanics? Take a read of our guide to the best strategy board games, to find where to take your tactical mind next.