After five years in development, design team penny lantern’s Iron Age-themed tabletop roleplaying game Stonetop launched on Kickstarter yesterday, filling its $15k initial funding goal in four hours, and reaching over double that by time of writing. Operating on a very heavily modified version of the Dungeon World game system, Stonetop is a traditional pen, paper and dice roleplaying game – except that the eponymous, ring-walled settlement plays as important a role as any of the player characters.

It even has its own character sheet, including “stats, traits and improvements to be unlocked in play,” and game mechanics, such as the need to prepare a supply “Surplus” before winter comes, according to the game’s Kickstarter page. The fantasy-imbued, alternate-Iron Age setting includes a wide, hostile world beyond the walls, populated by rival tribes, fantastic beasts, “eerie remnants of past civilisations” and magical artifacts called “Arcana”. All are represented in hand-drawn illustrations in the game’s rulebooks and materials – as are the nine playable character classes, each tied into a specific role in the life of Stonetop village.

Kickstarter backers can pay $25 to get digital versions of the game’s two core rulebooks (650 pages between them), plus assorted printable adventure starters, player aids, and extras – or shell out $60 to get hardback physical copies of the two books as well as the PDF collection. The goods are expected to ship out in October 2021.

The team behind the Kickstarter handle penny lantern – consisting of RPG writer and cartoonist Jason Lutes, game designer Jeremy Strandberg and illustrator Lucie Arnoux – has reportedly been working on the project for five years, with Stonetop starting as a mere play setting for the Dungeon World RPG, before growing into its own standalone game and world.

Lutes told Wargamer on Tuesday the Kickstarter’s performance had been “both a huge relief and a shot in the arm, because that number moves us out of ‘scraping by’ territory and into a position where we have more flexibility, and can actually pay ourselves”.

“Stonetop is about a close-knit village where everyone looks out for everyone else, so it’s pretty great to see that kind of community connection make our real-world dreams possible,” he added.

“We’re humbled and indebted to the 500+ (as of this writing) who’ve trusted us to deliver a great game.”

The campaign page puts a fair bit of meat on the bones, naming the game’s nine character archetypes – including the wall-watching Marshal, wandering Ranger and spirit-whispering Blessed. It also confirms that, while it’s playable for short campaigns, Stonetop is “best experienced over a dozen or more sessions”. 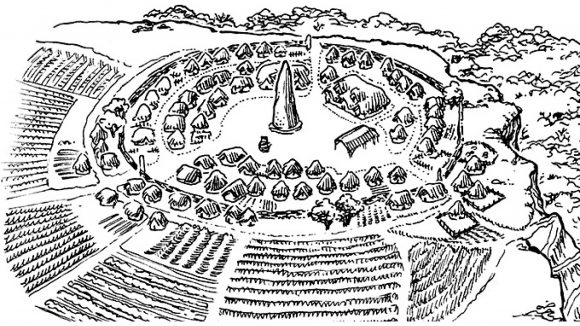 It’s a blooded team. Lutes also publishes RPG books under the brand Lampblack & Brimstone, and has previously Kickstarted Bingo Baby, a comic book based on a session of the game Fiasco, an adventure for the Dungeon World RPG entitled Servants of the Cinder Queen, and a Dungeon World supplement called The Perilous Wilds.

Strandberg is best-known for creating 2018’s Homebrew World – a one-shot-friendly variant of Dungeon World – followed by his own standalone short-campaigns RPG system, Defying Danger, in 2020.

Arnoux’s illustrations – both in colour and in the highly-detailed black and white ‘woodcut’ style seen in Stonetop – have been published in a variety of children’s books and journalistic reportage, with wider clients ranging from the Jewish Museum London to Womad music festival.