With that promise, and my excitement at seeing a game try and tackle the political and military complexities facing China in the 1930s, I dove in. After hours of reading, note taking, and playtesting, I hate to say that I have never bounced so hard off of a rulebook before in my wargaming career.

There’s probably a good game buried in the depths of Storm Over Asia. Unfortunately, you’re going to need an extremely dedicated group of players, a lot of time, and copious note taking (or know someone who already knows how to play) if you’re going to suss it out. Complex rules are, by themselves, almost expected in detailed wargames. Wargaming is naturally full of complex interlocking systems that seek to codify and gamify incredibly intricate military and political systems.

Complexity in a game simulating the almost baffling levels of intricate politicking, diplomacy, and military maneuvering in 1930s China are bound to be complicated if they are going to attempt to simulate even a portion of what had or could have transpired. I’m inclined to be forgiving, but the sheer inadequacy of the rules to convey the actual game in Storm Over Asia is baffling. For those who already love A World at War and Gathering Storm, go grab this game now. It is literally made for you. For the rest of us, please read on before deciding to take the plunge. 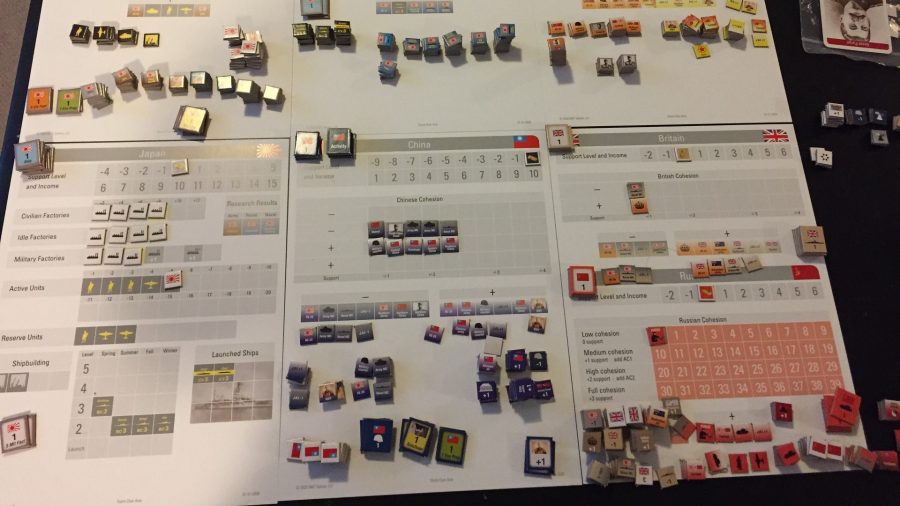 There is little within the manual to get players acquainted with the actual structure, goals, and round to round play of the game. It is almost as if the rulebook assumes players will already know what kind of game this is and what type of interaction they should have with the components. It is as if a mastery over the previous Gathering Storm is not only expected, but required of someone purchasing Storm

There is little within the manual to get players acquainted with the actual structure, goals, and round to round play of the game. It is almost as if the rulebook assumes players will already know what kind of game this is and what type of interaction they should have with the components. It is as if a mastery over the previous Gathering Storm is not only expected, but required of someone purchasing Storm Over Asia. To list a few examples of many: The basic rules surrounding the placement of diplomatic control flags on the game map (the big meat-and-potatoes area control portion of the game) are in section 30, near the end of the book. They are referenced throughout the previous dozens of pages and sections but only esoterically. Aside from a simple setup page, which, I admit, did help, the rules do not tell you what things actually do and why they do it in a straightforward manner.

You’re forced to figure it out through a full cover-to-cover read of the manual alongside a full reading of the included ‘battle manual’ which is a list of included tokens and cards. The Battle manual is essential and well laid out, which can go some way to making the constant reference more manageable, but it isn’t enough to offset the ongoing difficulties. My first playthrough had me constantly flipping between the two books to figure out almost every step of the game process because, and this is major issue number two, there is virtually no relevant information on the player aids. 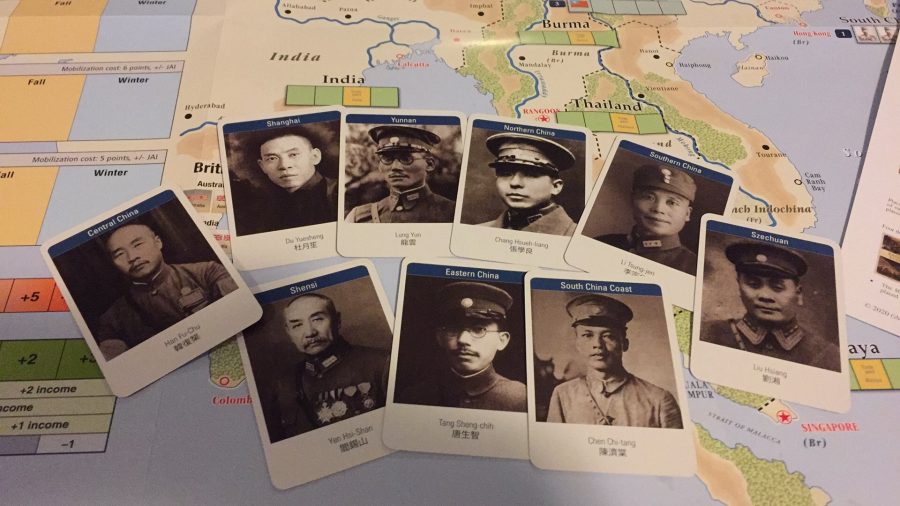 The map and player aids are mostly holding boxes for the dozens of tokens each faction uses to track positives and negatives in support, garrison levels, and other faction specific tracks. Research is done with coloured pens on separate sheets and is itself a nightmare to figure out, with different symbols and numbers poorly explaining how one can allocate the first, third, fifth etc research point in a specific field. That specific field information, along with the vast majority of nation specific information, is no where but within the rulebook, making running each nation an exercise in memorization that few of even my hardcore group of wargamers were willing to tolerate.

Go West(ern front): Check out these war board games

Starting to put together a test game only happened after two full rulebook read-throughs with note taking and an extended search online for play guides to Gathering Storm that I had hoped would shed light on the basic flow of the game. The most tragic bit is that the game itself isn’t particularly complicated, just that the means by which the game attempts to give you that vital information is conveyed in about the least helpful way possible. Now, I’ve got that out of my system and you are sufficiently warned. How about the game, then? 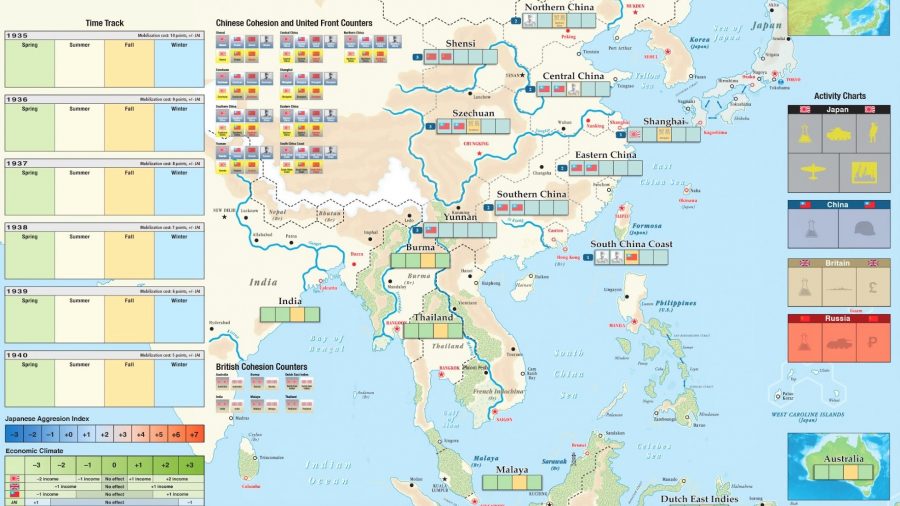 Japan on one side and Nationalist China, the Soviet Union, and Great Britain on the other vie for control over East and South East Asia while trying to prepare themselves for the inevitable global war. Playing with an eye to the future and not just the immediate conclusion of the game is a great concept. Players need to balance immediate benefits with long term investments, knowing that one can easily take away from another and that their opponents will be willing to exploit any signs of weakness for their own political gain. In each game turn a series of random events, public and secret, drastically influence what each nation should spend their turn’s income on.

These random events lend a great deal of replayability and keep players on their toes. A particularly good secret pull can pressure Japan into expanding their navy when that had previously been on the back burner, for example. Players then calculate their income, based on national support, factories in Japan’s case, military expenditures, the global economic climate, and a random tile draw. The tiles act to track currency. These income points are then spent alongside action points (an expandable pile of tokens which restrict how much of a certain action a player can do.) Players must manage their income and these action points over the economic and diplomatic rounds. Economic rounds are taken (mostly) simultaneously and involve construction, research, and the training of new troops.

The diplomatic round has players placing activity tokens down with their value kept secret until a general reveal. The cat and mouse of diplomatic posturing can really keep players on their toes, especially when secret national events and combat can influence outcome. Combat is fairly abstract and can happen between Nationalist Chinese forces and Communists, between The Soviet Union and Japan, and between Japan and Chinese forces. Japan especially needs to balance their military expeditions with diplomatic, economic and research efforts. Each nation plays very differently, with Japan having by far the most to do on a turn, followed by China, with Britain and Russia often relegated to a support role, keeping a greater eye on the future war. 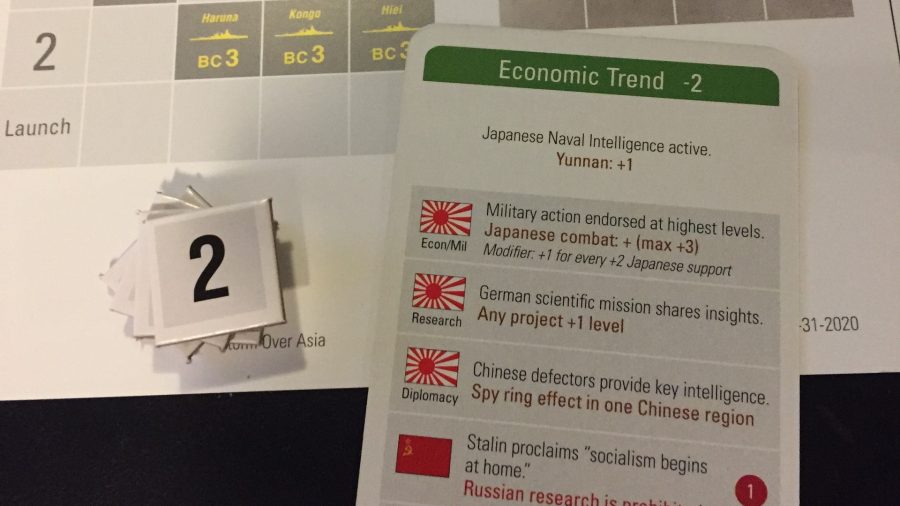 There’s nothing wrong with this kind of asymmetrical setup. Britain and the Soviet Union have to think on their feet, balancing support for China against Japan against their own research and diplomatic initiatives. China itself has to not only contend with Japanese expansion but also the wiles of warlords and the ever-present threat of Mao’s communists. Striking against them, balancing the United Front, and dealing with your allies means China will have a lot of thinking to do each round. The Japanese have even more. As the only faction that has to deal with factory production, maintaining two types of garrisons, possible Soviet aggression in the north, Chinese conquests in the south, and the added complication of shipbuilding the Japanese player has to think on their feet to keep their heads above water.

This should all sound fun, because I think the underlying core concept of Storm Over Asia is fun. But I, even with a dedicated wargamer in my wife, had an absolute hell of a time putting any of this together. The rulebook bafflingly assumes an intimate familiarity with the concepts of Gathering Storm, to the point that I had practically no idea how the rules I was reading would translate to the gameboard until the final 5 pages of the rulebook, and even then it was sketchy. The diplomatic game is a fun game of bluffing and resource allocation, the research and economic game forces you to think hard about long term planning, and the thrill of pulling off a successful combat is made all the more fulfilling because of the tenuous position each player holds in the region. It’s all really great stuff, and that makes the total opacity of the game’s presentation all the more frustrating. 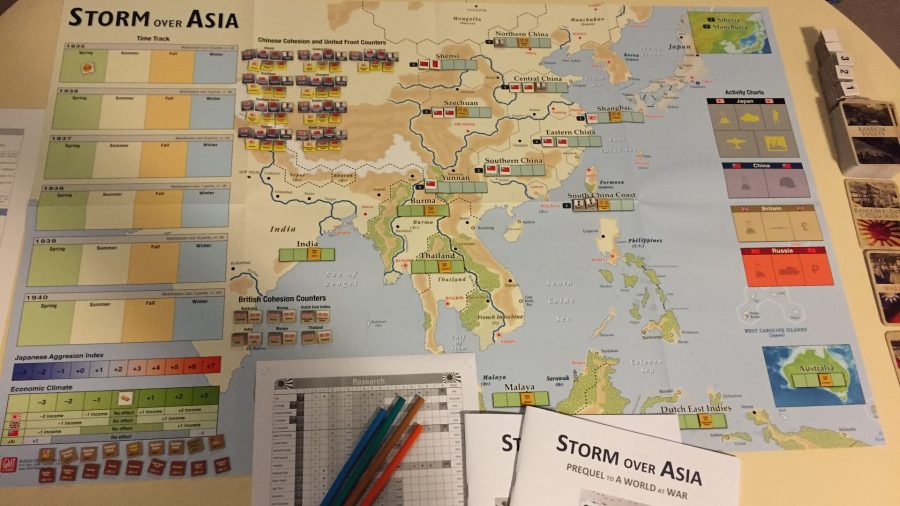 Another potential issue for a lot of wargamers is that there is no true way to play solitaire. The random events, research, and diplomacy phases all require hiding information from the other players until the correct time, something that becomes impossible to do (especially with random cards) if you’re playing by yourself. This game is clearly meant to be played with 2-3 like-minded gamers but the viability of solitaire is always a common question.

Something fun is lurking here, but the rulebooks make it so difficult

The greatest concern here, as a game review, is that I don’t believe the average wargamer will be able to find enough people dedicated to learning how this game works well enough for it to produce the kind of results I think it is capable of. The underlying game feels like it works, but the hours it took me to get there made it a painful experience. I want to reiterate here at the end, I’m no stranger to monster games, to grand strategy games, nor even to wargames with shoddily written rules.

Storm Over Asia is one of the few times where I firmly believe that some brave soul is going to have to take the time to write up a proper game overview, setup, cheat sheets, and FAQ to make the game playable for the average wargamer. That or having someone intimately familiar with the rules patiently explain the game to you. For them, and for people who already like Gathering Storm and who want the full experience of playing A World at War, it’s a no brainer. But you all already bought it didn’t you? For the new player, for the curious, something fun is lurking here, but the rulebooks make it so difficult you’ll have to decide if it’s worth it.