For many, learning and teaching a new board game represents a huge time investment. Strategy board games like Root or Scythe have a sea of mechanics to digest, and setting up a large game like Gloomhaven for the first time could take up an entire evening. The design company Xplored has set out to streamline the board gaming experience with the ‘smart’ board game platform Teburu, a mishmash of hardware, software, and cardboard that aims to do the hard work of board gaming for you.

Teburu, and its debut board game The Bad Karmas and the Curse of the Zodiac, has already smashed its initial funding goal of $218,047 / £166,078 on Kickstarter, with a few hours left to go as of this article’s publication. What may at first seem like your average crowdfunding affair – a seriously component-heavy co-op board game – also comes with some new technology, as well as the tools you need to develop your own game on the platform for free. A pledge of around $184 / £142 gets you The Bad Karmas, the Teburu system to play it on, as well as an accompanying iOS / Android app and all stretch goals.

Wargamer recently had the chance to take Teburu for a test drive, and it’s surprising how easily you can pick up and play a game – whether that be The Bad Karmas or one of the recently announced Paradox Interactive games set to release on Teburu in future. The rulebook experience is condensed down into a single tutorial video, and then the game takes on the rest of the admin for you – you don’t even need to calculate the results when rolling a handful of wireless dice.

As a concept, Teburu is certainly an interesting one, and there’s a lot going on under the surface of its sensor-packed board. Recent decades have shown constant innovations in the world of technology, but this does mean there’s often a tendency to over-promise with new technology by branding it as ‘the future’ of a given industry.

To better understand what Teburu is, and what (if, indeed any) impact it could have on the future of tabletop gaming, Wargamer spoke to Xplored founder and CEO Davide Garofalo – who sees Teburu as a future of board games –  as well as tabletop RPGs like Dungeons and Dragons.

Wargamer: Let’s start with the elevator pitch. What is Teburu, and what can it do for board game lovers?

Davide Garofalo: Teburu is a way to enhance the board game experience which keeps the player focused on the board, their components, and the people they’re playing with – on a table or remotely. They are still playing a board game, but all the heavy aspects are no longer on the shoulders of the player.

Simply the best: These are the best board games in 2022

Teburu can make the experience more dynamic, engaging, and entertaining, because you have many hidden elements [in Teburu’s games] like cinematics on a screen, sounds each time you move a miniature, and the consequences of your actions appearing on-screen. So, it’s still a board game, but enhanced through technology. It’s not the future of board games – we’ve been told this many times, but we don’t want to be so bold. What we say is, Teburu is a new future for board games. 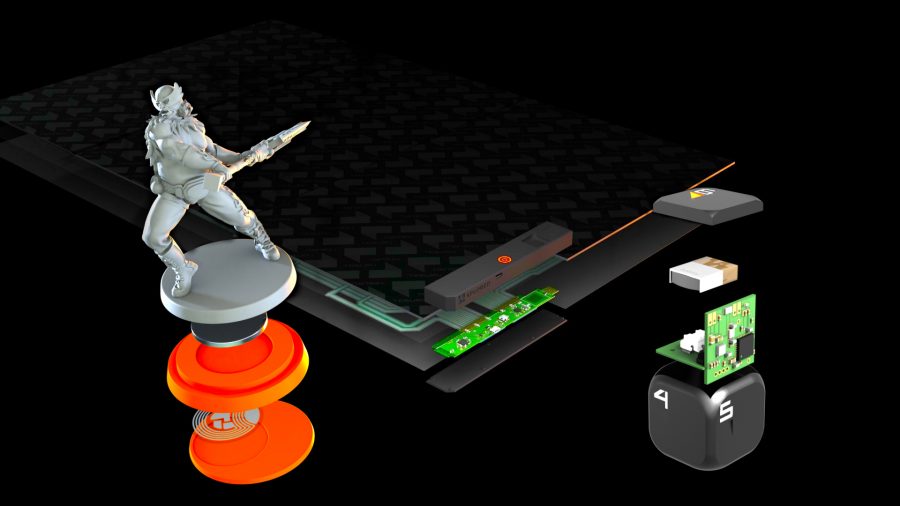 Can you tell us some more about the kind of technology Teburu uses to achieve this?

DG: Teburu is a foldable piece of cardboard – like Monopoly, or any other kind of board game cardboard. Between a sort of sandwich of cardboard, there’s a very thin layer of printed electronics with sensors. When you put a map on top of the surface, and you move your miniatures on top of the map, the board senses which miniature has moved by identifying its unique ID and tracking its position.

"If you’re stuck on a level, we can change it"

The Teburu ‘brain’ is collecting all the data – including what the wireless dice do – and communicating it via Bluetooth to the app. The app knows what’s happening in real time, who is where and what they do, meaning we can have hidden events and intelligent behaviour from enemies. So, say you’re moving your miniature to open a door. If you open the door with no weapons, the monsters may jump on you; but if you open the door with a flamethrower, they may run away.

The app also has a networking system that means you can play with one or more devices – you can play with one device passed around, or 45 devices all linked, each able to detect the number of devices connected and automatically attribute roles to each device to give the best experience, both locally and remotely. We can also use telemetric data to adapt designs. If people are stuck on a level, we can change it; we can give seasonal events or community challenges; all these kinds of things that, in board games today, are impossible. 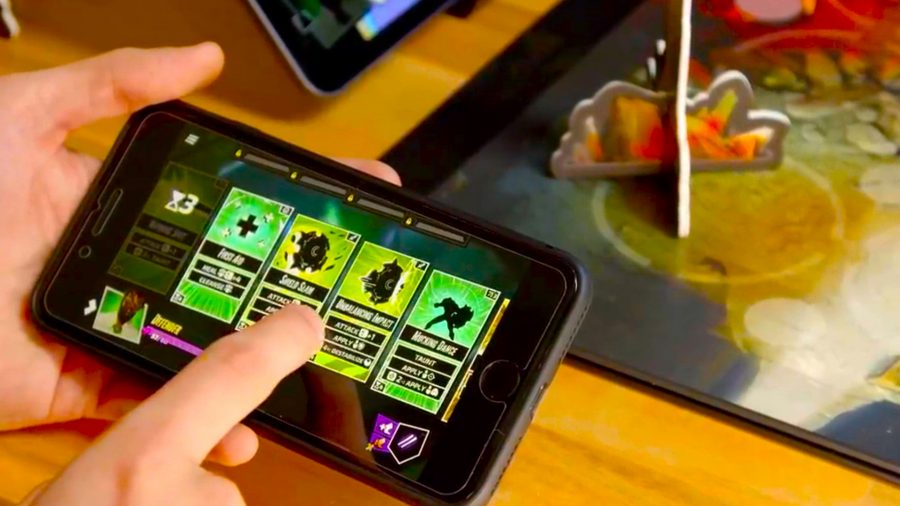 Why did you make Teburu, and what was the driving force behind it?

DG: We have 14 years of experience as a company in thinking of, conceiving, prototyping, and developing innovation for big brands. We have many awards, but we never did something for ourselves. We also have a passion for board games, and we decided that, thanks to our skills, we could enhance an experience that we love.

On the net: Check out this guide to the best online board games

For us, technology is only a tool – we don’t innovate for the sake of technology. We want to enhance the experience of board games, so, we asked ourselves, ‘what would be amazing in board games?’ Then we researched ways to make it feasible and affordable. 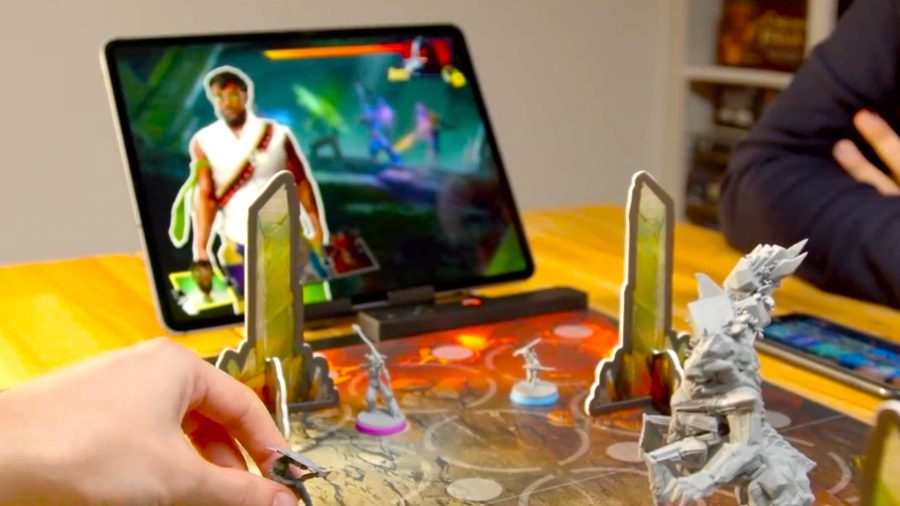 In your mind, who is Teburu for?

DG: In the long term, our vision is that Teburu is for everyone. Thanks to the features it has, it’s probably one of the best alternatives to ‘casual’ tabletop games – easy ones that everyone can play with their family or kids. Teburu allows this same audience to play complex games, thanks to the fact that all the complex rules and the bookkeeping is done by [Teburu’s] app – while still keeping the physical and social experience of a board game.

"In the long term, Teburu is for everyone"

In the short term, we decided to focus on Kickstarter backers – those who back rich and ambitious board games with huge miniatures. Kickstarter is the ideal platform for us to launch an innovative project and ask for crowdfunding, and we also want to onboard hardcore board game lovers.

In the mid term, we plan to target the game developers willing to use our platform to create their own games. We unveiled recently that the free software development kit (SDK) to develop games on Teburu is already available. 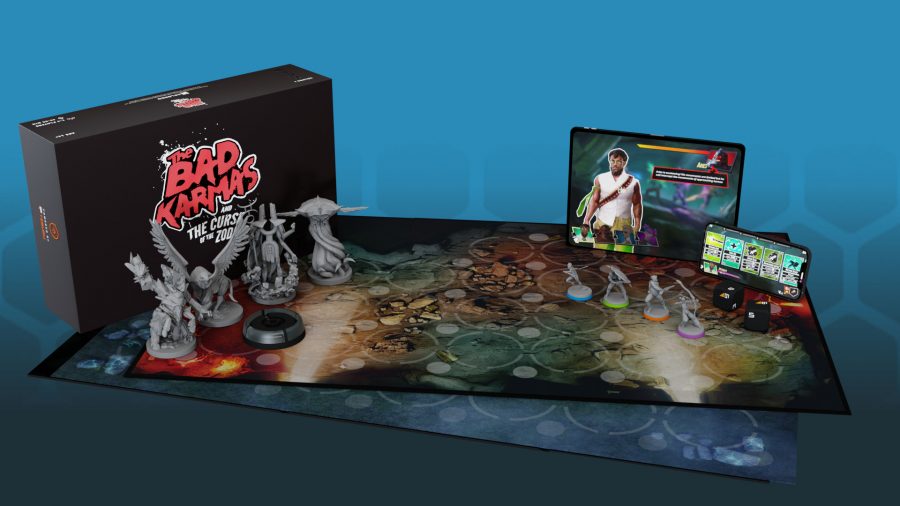 What games are you currently planning to put on Teburu?

DG: There’s The Bad Karmas, which is now on Kickstarter. This is a boss fight game with deck-building, where four to five heroes cooperate to engage in tactical, fast-paced combat against a unique boss.

I don’t think it’s properly shouted about on Kickstarter, but the game’s director is the same concept artist who worked on Godzilla, Pacific Rim, The Hobbit trilogy, and so on.

Game theory: These are the best strategy board games

The story, which is more like a modern Netflix series than a classic fantasy, is written by an author who worked on Red Dead Redemption and many other big videogame successes.

There’s also Sword and Sorcery, which is a new game in that universe, and we have a multi-title deal with Paradox. This includes a Vampire: The Masquerade game, one for Werewolf: The Apocalypse, and a third one we can’t yet officially unveil. 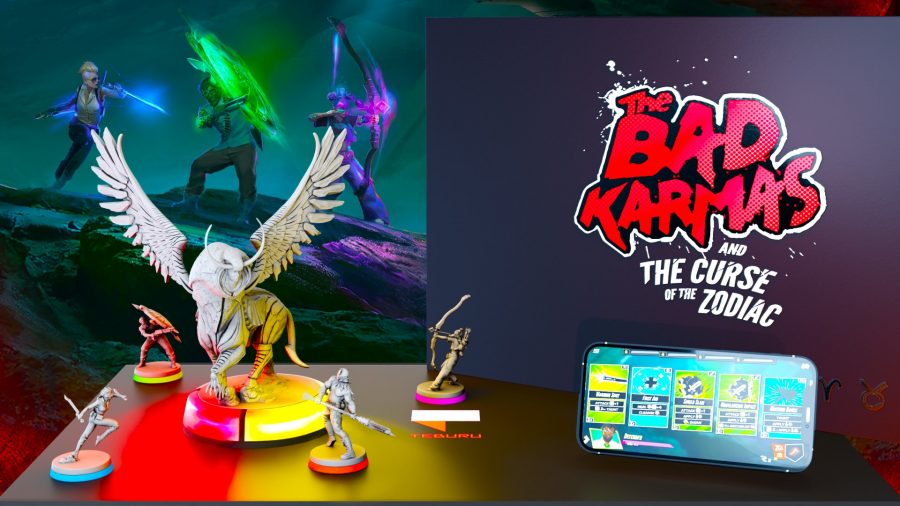 Is there anything you’d like to see on the Teburu platform in future?

DG: A personal dream would be to adapt the Diablo videogame, as I see it in many ways as already like a board game. But I think the most important IP I’d love to have [on Teburu] in future would be Dungeons and Dragons. They’ve tried many times to add physical elements to the roleplaying game – sometimes with good results, and sometimes with worse results. The problem is that you can’t link the story and the rules to physical elements in an easy way.

For this, Teburu is perfect. You can move things and immediately see what happens, and each miniature is unique. Even if my mage is the same miniature as yours, the RFID tag inside the base of my mage is unique worldwide. For Dungeons and Dragons, this is perfect for saving my character’s growth and history.

Another thing is the idea of a massive multiplayer tabletop game happening in future. Imagine you are playing a dungeon-crawler with your friends – your miniatures enter a dragon cave to find wounded characters who have already looted the cave. There can be other players playing at that exact moment who you could interact with through the server.