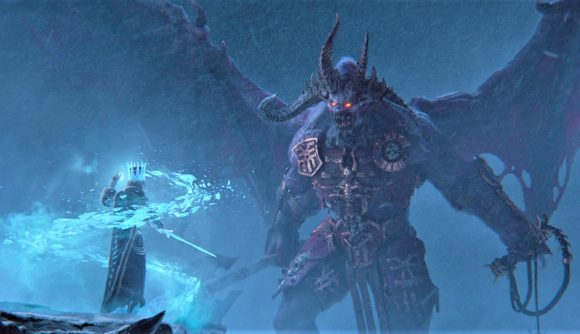 Praise Khorne and fetch skulls for his throne: Creative Assembly (CA) has today finally revealed the third instalment of its Total War: Warhammer series with a cinematic announcement trailer. While there’s no definite Total War: Warhammer III release date yet, CA says the game will be out in 2021 – and confirms that fan-favourite factions Kislev and Cathay will appear for the first time in the grand-strategy fantasy series, alongside four new Chaos factions, one for each of the Chaos gods. Among many hints and clues, the reveal trailer below shows a glimpse of Kislev forces and Chaos daemons clashing in battle.

Set in a wintry tundra, the trailer shows frosty Viking-like infantry, cavalry, and massive armoured polar bears clash with fiery Chaos warriors and daemons. An ice mage, assumed to be Katarin Bokha (the ice queen of Kislev), heeds warnings of the growing power of Chaos and faces a call to arms to halt the Chaos threat before its corruption overwhelms the world. The faces of the Chaos gods – filled with maggots and infernal rage, among their other nefarious characteristics – also make a menacing appearance.

An accompanying announcement from the publisher confirms that Total War: Warhammer III  will feature the races of Kislev and Cathay, along with four factions of chaos – including those devoted to Nurgle, Slaanesh, Tzeentch, and Khorne. It’s unclear just how much of the game’s map will extend to these factions’ homelands, but CA did confirm the Cathay-synonymous Lands to the East and daemon-infested Realms of Chaos will have a role in the game.

Like many stories of Warhammer Fantasy Battles, the game’s grand campaign will take players into a world-shattering conflict between the daemonic powers of Chaos and the mortal guardians of the world.

In cryptic form, CA says players will command their selected faction on a “journey through the nightmarish Chaos Realm”, conquering others to either preserve or exploit the “power of a dying God”. You’lll be mustering an army to join the Chaos hordes, or fight against the invading daemons, before facing a climactic endgame that will decide the fate of the mortal world.

Many players will be excited by the inclusion of Kislev and Cathey – fan-favourite races that some had already predicted to be involved before today’s announcement.

Kislev is a minor Warhammer faction, and the most northerly Human race of the Old World. Standing on the edge of the Human civilisation, they have long battled encroaching Chaos hordes that threaten the mortal world with annihilation, relying on their excellency in horsemanship and natural talent as warriors to fend off threats. A bit like Vikings, they’re tough, hardy, and covered in snow.

Cathay lies far away to the East, and close to the border of the Chaos wastes. Often likened to oriental China, the faction is famous for golden pagodas, fine porcelain, and serpentine dragons. It’s even linked to the more famous factions through the in-game trading route, the ‘Silk Road’. 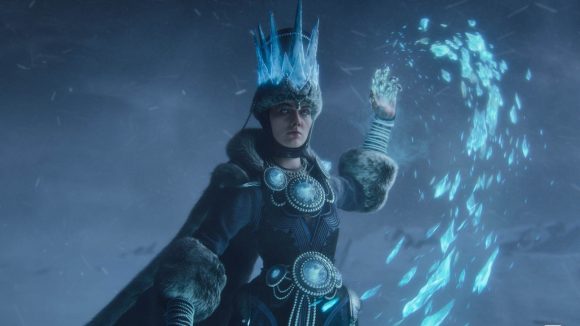 While the trailer certainly casts a spotlight on Kislev and their role in defending the mortal world from the growing daemons of Chaos, Cathay is given only a fleeting presence. The scope and scale of the far-eastern faction remains to be seen.

Speaking about the Total War: Warhammer III in a press release, Game Director Ian Roxburgh, said: “Our vision, from the start, was to create a series that felt like an incredible journey through this world we all loved.

“The enormous support of our players in ensuring the success of the first two instalments has pushed our ambition to new heights, and we can’t wait for everyone to experience it.” 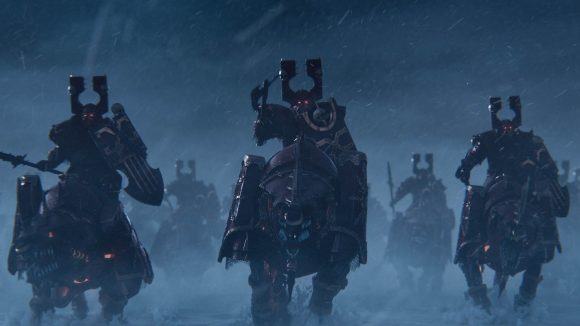 Jon Gillard, Global Head of Licensing at Games Workshop, added: “Creating and developing the armies of Cathay and Kislev for this project has been a lot of fun for our designers and we’re looking forward to seeing them take to the field in this huge third game in the series.”

“The craft, dedication and authenticity to the Warhammer world that Creative Assembly has poured into the celebrated Total War Warhammer franchise over the years has been a delight to us at Games Workshop and fans worldwide.” 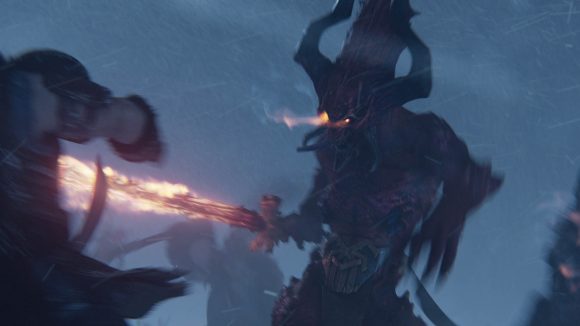