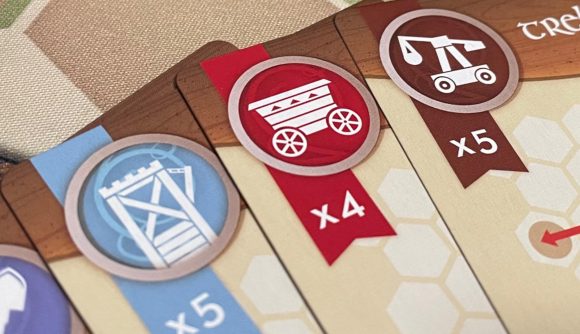 Abstract strategy wargame War Chest is getting a new expansion, introducing defensive buildings and siege weapons to the bag-building board game. War Chest: Siege will release on March 19, bringing a new fortification mechanic that allows players to build defensive fixtures on the board, and four new units for their sieging – including everybody’s favourite medieval mechanism, the trebuchet.

The first board-altering mechanic to be included in War Chest, Siege introduces defensive forts that can be positioned on single hexes to protect units inside. Also preventing enemy units from entering their hex, forts can be wielded to hunker down on valuable control points, allowing you to capture a point even if your units have left.

War Chest: Siege co-designer David Thompson tells Wargamer the forts are intended to add some visual and mechanical variety to the board, with their functional design springing from “a combination of wanting to add a little texture to the board, and change the calculus as to whether you’re trying to advance your units, or protect them.”

“When you play the base game, the board is empty. So we thought, one obvious thing we could introduce that would be impactful, but not a huge cognitive load in terms of rules, would be some way to effect the board,” he added. 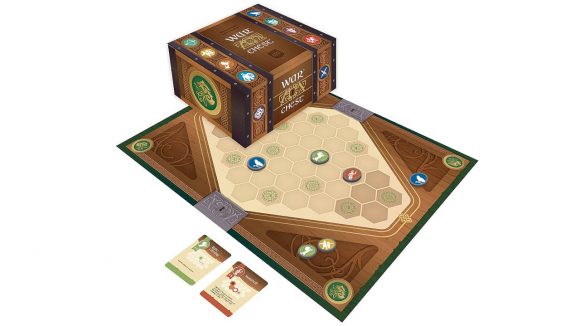 “We wanted to give players an interesting choice about the use of forts: you can use them to protect your units, but if you do that, you’re not moving them forward.”

Alongside the new forts come three new siege units tailored to attack enemy fortifications: the trebuchet, siege tower, and war wagon. The trebuchet can attack targets two or three hexes distant, but only in a straight line; the siege tower can perform two attacks, making it possible to destroy a fort and any unit inside it in one turn; while the war wagon pushes friendly adjacent units in any direction (effectively giving a free movement to a friendly unit), or can take a hit on behalf of a friendly adjacent unit.

However, to compensate for their powerful attacks, the siege weapons must first be bolstered using additional coins. Thompson said the design team went through multiple design schemes, but were particularly keen to balance the power of the new units with those of the base game.

“Once we had decided we’d unlock these special powers through bolstering, it allowed us to give the new units abilities that were more powerful than the base game, but required that extra effort for players to use,” he explains. 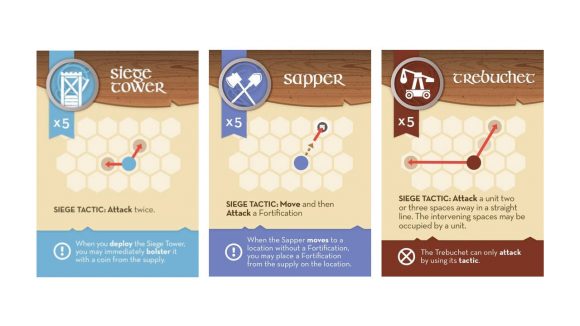 Although no additional expansions for War Chest are currently in development, Thompson says the design team is looking to add future expansions – and the reception and popularity of Siege will determine if anything else is added to the pipeline.

“Trevor and I certainly have no shortage of ideas. I’d personally like to see something based more on subterfuge or deception. You can imagine doing some interesting bag-building and bag-manipulation mechanics.”

“We flirted around with a little bit of that with the design of these two [Siege and 2019 expansion Nobility], but it didn’t get far enough to become its own expansion this time,” he adds. 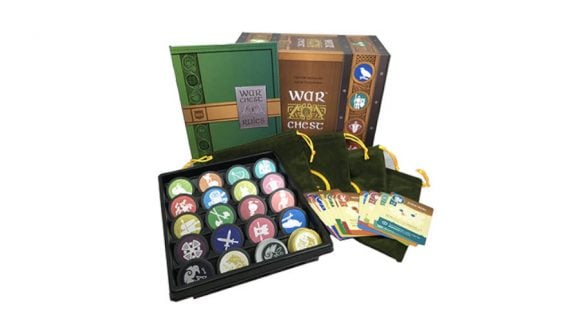 Straightforward mechanics played through an abstract design, War Chest has been praised as a streamlined wargame that doesn’t skimp on the strategy.  The first War Chest expansion, Nobility, was released in 2019, and, like Siege, adds new units and mechanics to the game.

The War Chest base game was released in 2018, and plays as a bag-building wargame. Players draft units into their army at the start of each turn, before distributing them across the central board and taking turns to activate units, capture control points, and attack enemies.”