My Blood Angel Assault Squad has just laid waste to a swarm of Termagants with a single frag grenade, and the nearby Aggressors reduced their Hormagaunt brethren to mincemeat. Blood covers the arid ground, space-gothic architecture juts above a sandy wasteland, and murmurings of the Emperor’s virtue is all the conversation you’re likely to hear for miles around.

In the two missions and tutorials of Warhammer 40,000: Battlesector that I played, this was the core experience throughout.

Battlesector plays at the tactical level, handing you upwards of 10 units of space marines to lead across gridded maps, securing objectives and killing vast quantities of insectoid Tyranids along the way. There are squads of infantry, vehicles, and hero units under your control, and basic combat functions around the usual system of cover, elevation, distance, special abilities, weapon firepower. Weigh up whether your squad of Aggressors or Intercessors should make the first harrying strike, before quickly advancing your troops to the next line of cover, for more fighting.

And you will be advancing. As Wargamer was told in an exclusive interview following the game’s announcement, Battlesector incentivises aggression above all else. Units are rewarded with ‘momentum points’ for killing enemies, to be spent on extra actions and persistent ability upgrades. Withdraw your units from the fight, and their momentum gradually depletes, wasting their bloodlust. 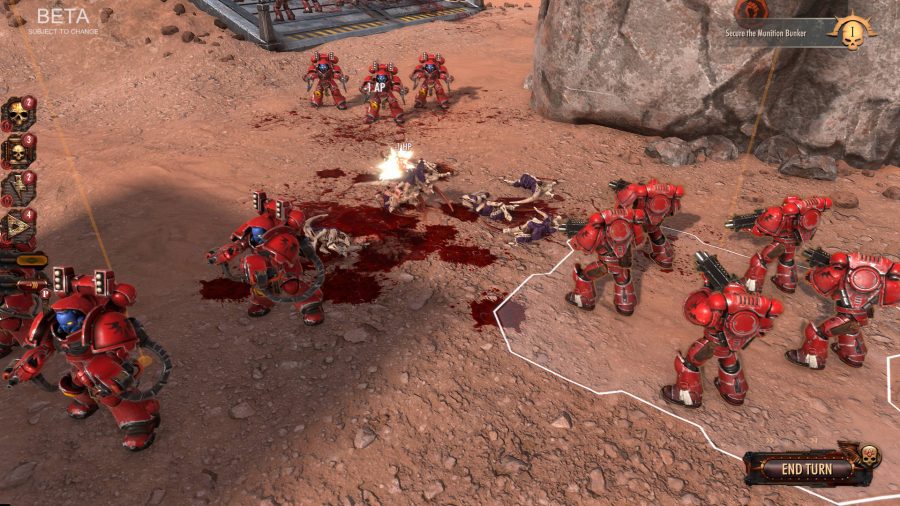 It pleasantly directs combat, and I found myself risking melee attacks with wounded units, in the hopes they would break the 100 momentum threshold and gain a boon for next turn. And it’s well supported by the less obvious rhythms of play. Carefully planned attacks of opportunity – by which units are granted a free melee or ranged attack against enemy forces attempting to flee across their neighbouring tiles – can be comboed to devastating effect.

Attacks of opportunity can be comboed to devastating effect

Some of my biggest follies came from attempting to retreat a unit after it had been severely wounded, only to find it cut down on its escape. It’s often, if not always, more rewarding to stay up close and personal, relying on supportive firepower to get yourself out of tricky situations, rather than a getaway. Although my Sanguinary Priest could heal one unit at a time, the HP recovery was so small as to make reliance on the ability futile. You can’t fall back, heal up, rally, and ship out for a second assault, because the first will never end. 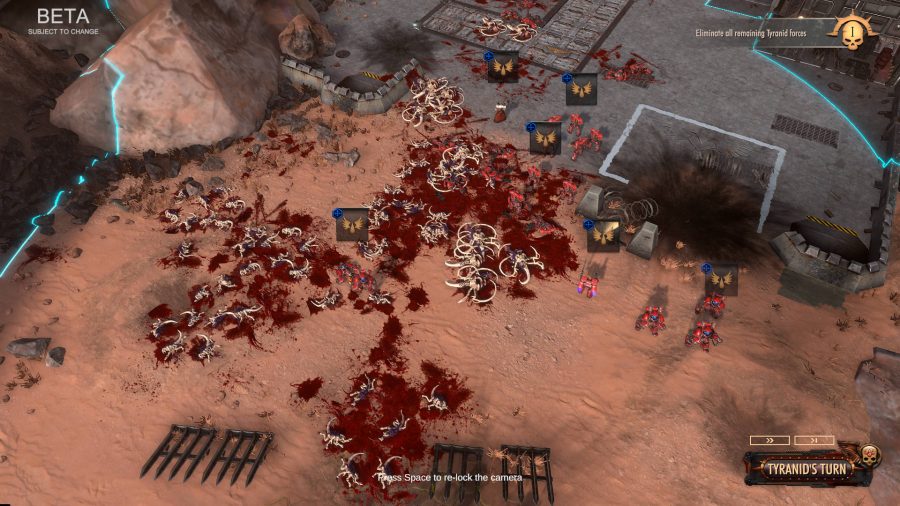 In the missions, I was given obvious direction to my skirmishing, with terrain and map design linearly pushing through a series of objectives, but never feeling so clear-cut as to be dull. Most tactical decision making came from ordering and positioning my troops to most efficiently deal with the enemies currently on screen, rather than pre-plan my manoeuvres in anticipation of a Tyranid swarm on the horizon.

Digital classics: These are the best Warhammer 40k videogames

It makes for instant action, but also a tangible lack of set-piece assaults, not helped by the questionable objectives. Both missions ended with an order to kill the remaining Tyranids on the map, but what I expected to be a glorious holdout against the bugs, quickly turned laborious, as I waited for the Tyranids to show themselves, so I could claim victory in a battle I had, really, won several turns ago. 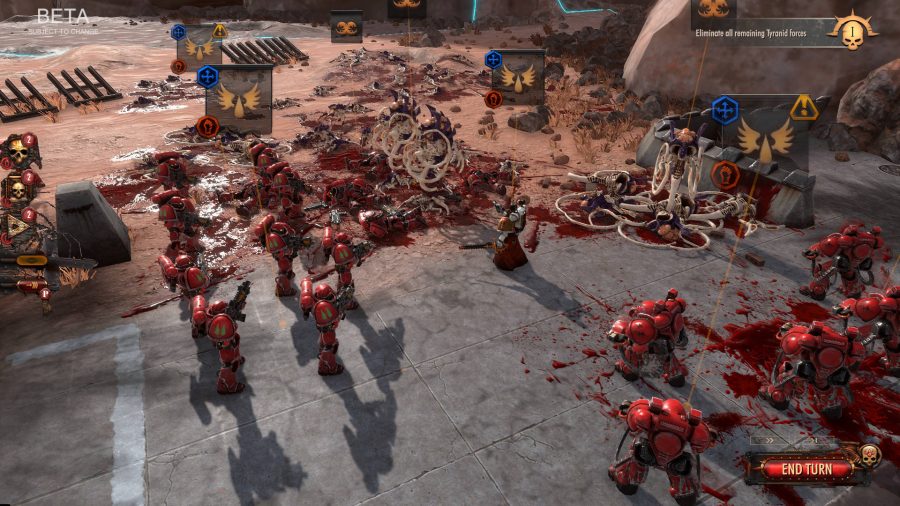 There are also some noticeable AI quirks. In many instances, a lone Hormagaunt or Termagant unit would sidle up to my main force, locking themselves into a throwdown that was sure to go my way. Rather than casting a few harrying blows, before returning with bigger companions, they’d stick around, only to be crushed under the missile fire of my Aggressors. And these AI blindspots are doubly important in Battlesector, in which farming those kills meant I was not only able to dispatch the enemy more quickly, but keep my momentum points afloat while doing so.

Some gripes aside, Battlesector is very 40K. Gorgeous unit models and appropriately gothic extraterrestrial terrain show a reverence for the tabletop game’s aesthetics. And the Blood Angels’ voice barks, extolling the Emperor or declaring their abject joy in ultra-violence, carries all the booming machismo you’d expect. 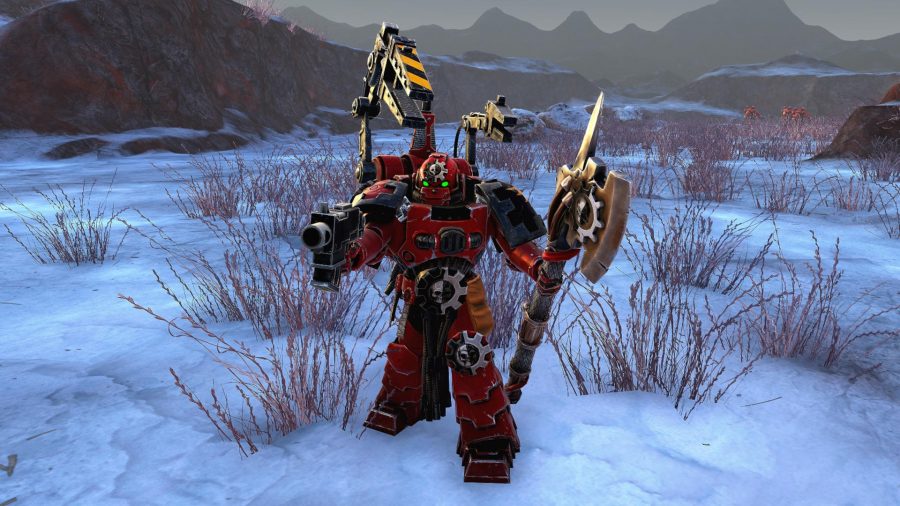 Promising stuff. Now we’ll have to see if Black Labs can make a 20-mission game out of it.