Warhammer 40k: Chaos Gate: Daemonhunters may already have won the award for ‘most bewilderingly long videogame title of 2022’, but that might not be its last gong; early auguries for the game have been good, and Warhammer fans – scarred as they are by prior disappointments – are beginning to have high hopes. Wargamer included; after our last preview, we’re tentatively clearing a seat for it in our guide to the best Warhammer 40k games.

And, lucky old us, the folks at Frontier – Daemonhunters’ publisher – invited us to a hands-on, playable preview of the game, including the tutorial, first mission, and – tantalisingly – an early boss fight. Not only that, but Wargamer joined Complex’s Creative Director Noah Decter-Jackson for a limited post-preview Q&A – keep an eye out for that very soon!

For now, though, we’ll run through our key take-aways from this two-hour demo, our highlights and concerns – and what you should be looking out for when Chaos Gate: Daemonhunters releases on May 5, 2022.

A disclaimer: obviously, the build we played was not final. There were multiple minor bugs: many weapon sounds didn’t trigger every time, other audio sometimes dropped in and out; textures occasionally looked a little janky, UI elements didn’t always display, and so on. One of the other reporters in our session reported a crash – but luckily we encountered no serious issues at all.

What we did encounter was a play experience that felt like exactly what was promised: XCOM with Grey Knights Space Marines, plus some format tweaks that work to serve the 40k setting. And work they do… 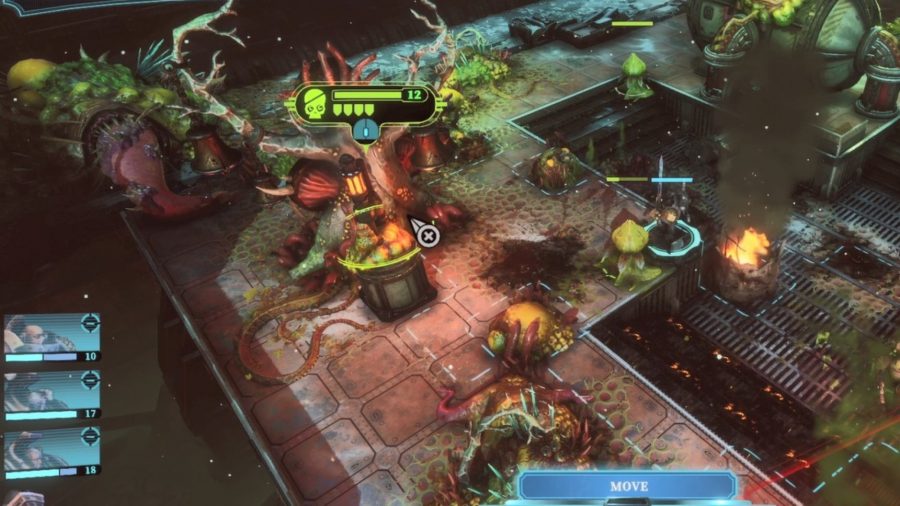 Originally, we expected Daemonhunters to be built on XCOM-style turn based tactics gameplay, with a 40k-flavoured re-skin. Then, the first previews suggested we’d also get some spicy meatballs to mix this up: guaranteed hit chance for all attacks; psychic abilities; selectable critical hit effects, and so on.

The twists on XCOM gameplay all play into the 40k theme

All were in evidence in our play session – and, between them, they mix up the XCOM experience nicely. Better still, they all reinforce the game’s particular 40k trappings in well thought out ways. Guaranteed hits mean you’re constantly reminded your warriors are powerful elites – but also allow for a higher danger level and highlight the vast cost of even one fatality. Likewise, as the psychically-charged Grey Knights, it feels only right you trade deadly warp powers with your Nurgle-worshipping opponents, and they all feel thematic. 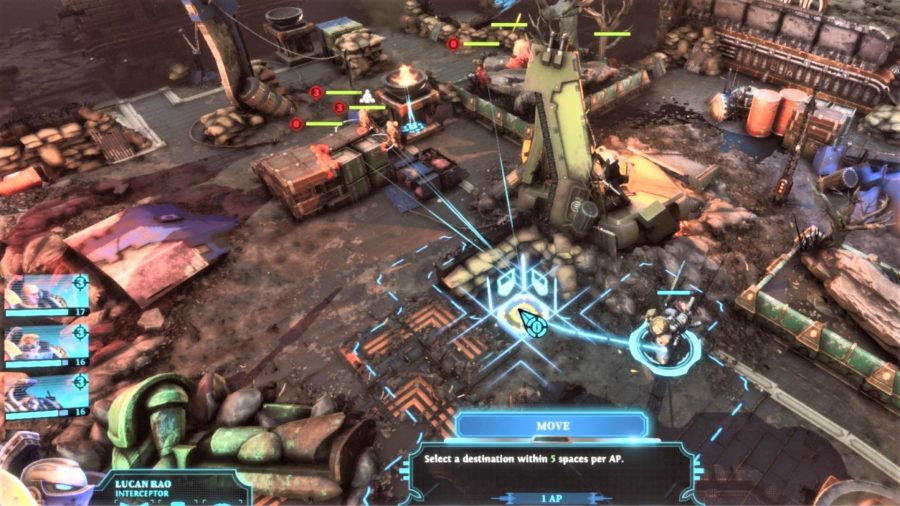 At one point, a Nurgle psyker disabled one of our Knights’ melee attacks for a turn with a nasty green miasma, for example. And – just as they can on the tabletop with a few choice Stratagems – your Knights can elect to channel psychic charge to either ranged or melee hits, boosting damage. It felt good dispatching a massive Feculent Gnarlmaw by activating Hammerhand, before ramming our nemesis blade deep into its rotten trunk. Generally, it all feels pretty good.

The Emperor’s finest: A guide to Warhammer 40k Space Marines

We did notice some slightly odd AI decisions – for example, Death Guard marines using their turn to Overwatch areas that their comrades had just filled with goopy poison, ensuring I wouldn’t be moving my Knights there. 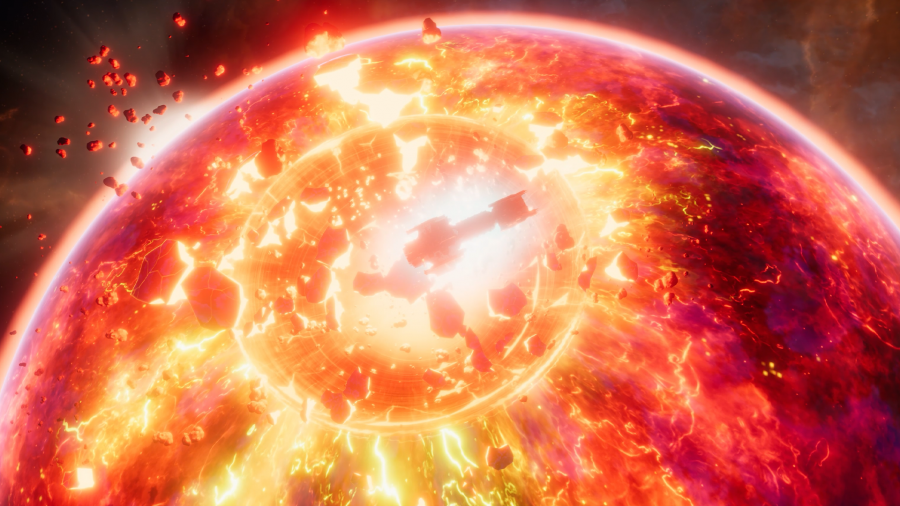 But, for the most part, the enemies are as alert, aggressive, and dangerous as their counterparts in XCOM 2 – meaning you’re almost never not in a fight. In fact, that shift of emphasis from careful, tactical manoeuvring to total, confident aggression is the key to what makes this game tick – a fact enthusiastically underlined to Wargamer by Noah Decter-Jackson.

Hang back, and you’re dead - the game rewards aggression

In the boss fight we played – taking on a particularly truculent Great Unclean One named Aeger in a suitably neon green, swampy death zone, crisscrossed with toxic rivers and dotted with nests of Nurglings that spawn more tiny killer daemons each turn. If you play the Imperial Fist and hang back defensively, you’re quickly overwhelmed – but if you charge at the foe with abandon – as we did, luckily – you’re rewarded with momentum, initiative, and lots of damage. It’s different from XCOM, certainly, and we’re cautiously optimistic that it’ll inject a bit more action and theatrics into Daemonhunters’ missions.

There are still open questions. Our demo ended with a cinematic showing a planet being destroyed by the 40k Imperium‘s monstrous Cyclonic Torpedoes, and a confirmation that the game does include that most evil of Imperial failsafe measures – Exterminatus. But, as to when and how; whether it’s a scripted story event or an organic player option; et cetera – we remain in the dark. In the meantime… 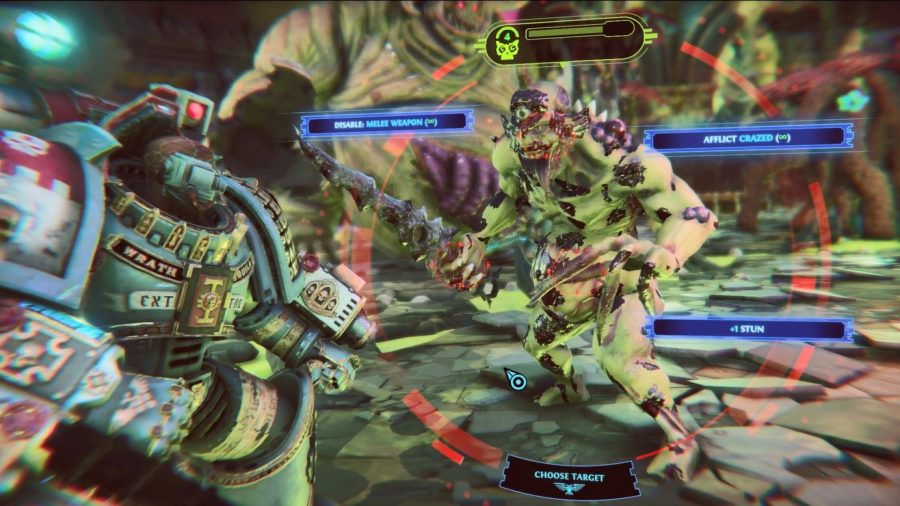 Unless Complex somehow drops a big bucket of boring all over it in the next few weeks, Chaos Gate Daemonhunters is going to be one of the best looking Warhammer 40k videogames.

Environments are properly atmospheric, colourful, and unsettling in just the right way, with some nice animation work bringing every nurglish growth and pustule to revolting life.

At a basic level, an isometric viewpoint on a handful of variations on grey-black-metal deckplates, or dull flagstones, can very easily get tedious. Not naming names, it’s an issue that’s plagued many a 40k title.

But, on the basis of this preview, The Bloom – an encroaching Nurgle chaos plague that forms the game’s apocalyptic threat – weaves colour into some at least somewhat varied Imperial and xenos landscapes that have enough verticality and detail going on to entertain the eye. We’ll have to wait for the full game to see if Complex can keep up the variety beyond these three levels, of course. 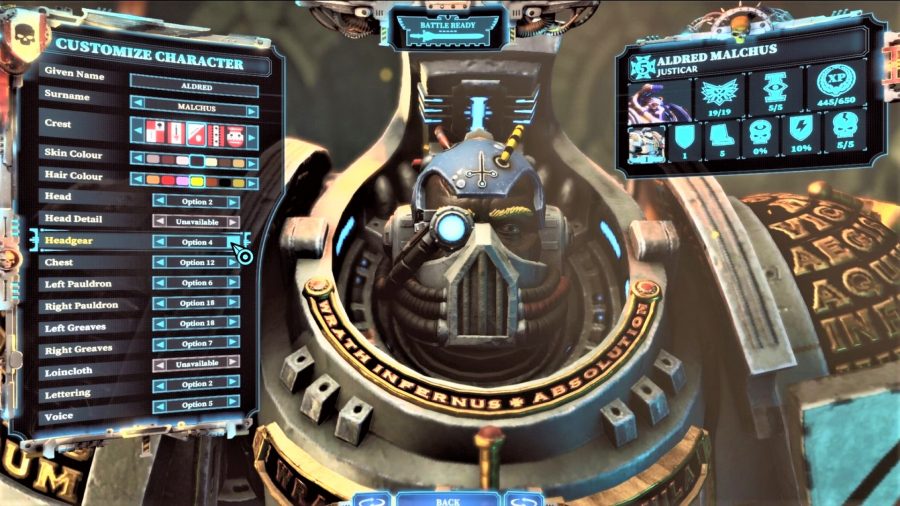 Some pleasing immersive touches do a good job of scratching Warhammer fans’ itch for meticulously building, equipping, and painting our tiny toy people, too.

The customisation menu for your Knights – while not in the same league as, say, a Bethesda RPG – already has many more options on hand than we were expecting; from a quick poke around, we found nine basic helmet types, for example – with more variants depending on the Knight’s class. Whichever crazy variation of pot-helm, visor, augmetic eye, and gold filigree you fancy, chances are you’ll find it.

Our biggest ‘ok, that is COOL’ moment during this preview was the moment we noticed that individually named, ‘relic’ type weapons have their names inscribed in gold on the actual in-game weapon (both before and after they get splattered with daemon blood, and/or crackle with warp lightning). You don’t get much more Grey Knights than that. 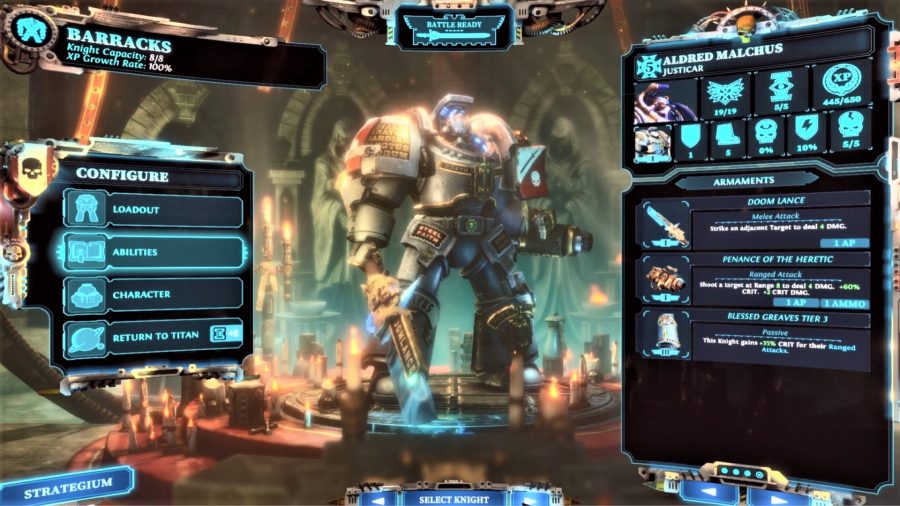 Frankly, it’s just fantastic. In the three levels we played, the background music was top-tier gothic orchestral dirge, ominous chanting, and movie-score intensity: all the ingredients for a proper Warhammer 40k atmosphere.

Your Knights’ ultra-heavy metallic clumping footfalls sound exactly right, and while – as we mentioned – some of the weapon sounds weren’t working in our demo, it has to be said that the wrist-mounted Storm Bolter (Grey Knights’ stock armament) has a sharp bang that brought us joy time after time.

Although there were a couple of spots of, er, odd voice acting (such as the aggravatingly not-quite-there British accent of the Captain featured in the tutorial), generally it’s excellent – and the voice effects just as good. Your Grey Knights’ sepulchral voices, modulated through vox-grilles, sound particularly on point.

There really seems to be an uncommonly large amount of Warhammer 40k voice acting here – both in the promised 90 minutes of rendered cut-scenes, and in conversations with various NPCs on board the Baleful Edict – and we’re looking forward to sampling more. 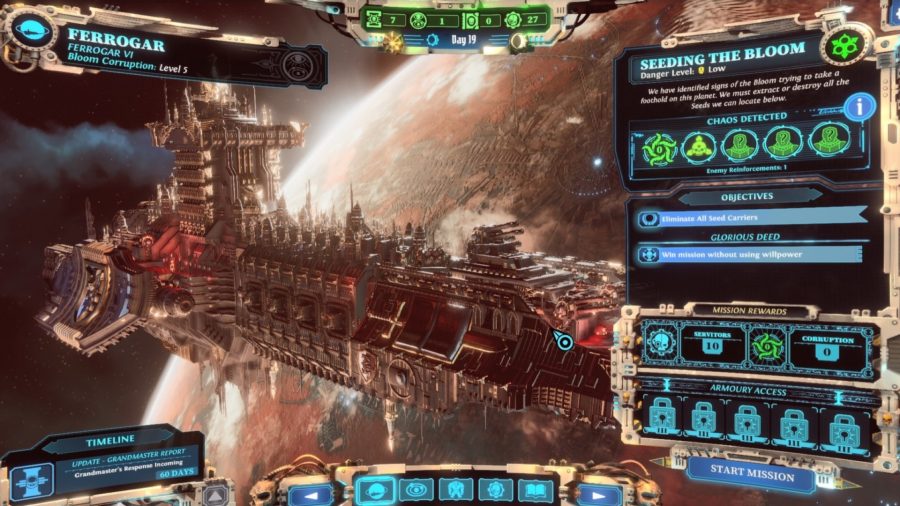 Let’s be clear: there are some scrappy edges, and the usual bugs, for Complex Games to fix before the big day on May 5 (nice of them to let Star Wars keep the previous day, wasn’t it?).

And we still have niggling concerns. For our money, the otherwise magnificently realised Warhammer 40k grimdark setting seems a little out of kilter with some slightly campier tonal choices – marginally overdone voice acting here and there, and the Knights’ rather XCOM-reminiscent, cartoon-like facial features, for example. Such contradictions are endemic to Warhammer 40k, though, and the proof of whether they ‘work’ is always in the pudding.

When we get to see the finished product, we’ll really dig the Nemesis Falchion in and find out exactly what Daemonhunters is worth. For now, though, it smells like a winner to us. If you can ignore the Nurgling stink, that is.