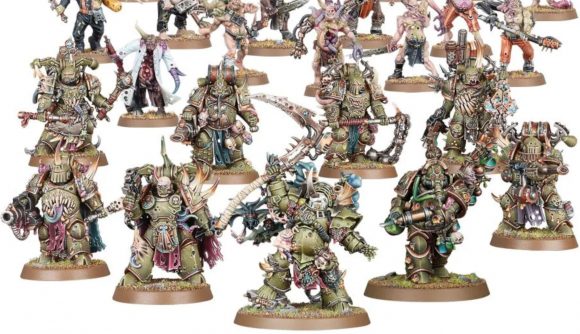 Two new army boxes have made their way to Warhammer 40k, and this time, they’re narratively charged. The Adeptus Mechanicus’ Charadon Sector Defense Protocol and Typhus’ Besiegers of Metalica Death Guard boxes appeared on Games Workshop’s webstore earlier today, bundling together a bunch of existing miniatures into two time-limited collections – although for no extra savings.

Released to align with Warhammer 40k’s most recent narrative play supplement book series, War Zone Charadon, both boxes consist of their army’s respective Combat Patrol box plus a few extra units. On the Admech side, you’ll get one Tech-Priest Enginseer, one Onager Dunecrawler, three Kataphron Destroyers, and ten Skitarii Rangers, alongside one unit of Kastelan Robots and a Skitarii Marshal. In the Death Guard box, meanwhile, you’ll find Typhus, one Biologus Putrifier, seven Plague Marines, and 30 Pox Walkers, plus a Foetid Bloat-drone and five Blightlord Terminators.

The Charadon Sector Defense Protocol box will cost you £148.50 and Typhus’ Besiegers of Metalica set £150 (no USD prices have been announced). However, the mathematically inclined will soon spot one oddity: the cost of each box is equal to the cost of its individual parts. That means there’s apparently no saving to be had from buying these sets, as opposed to buying either army’s combat patrol box and their extra units separately.

The boxes will save you some pennies, however, if you adamantly refused to purchase a combat patrol box and, for some reason, wanted to buy every unit individually. Otherwise, there’s no price saving to be had. Both bundles are time-limited releases, and will only be available over the week from November 16 to November 23. 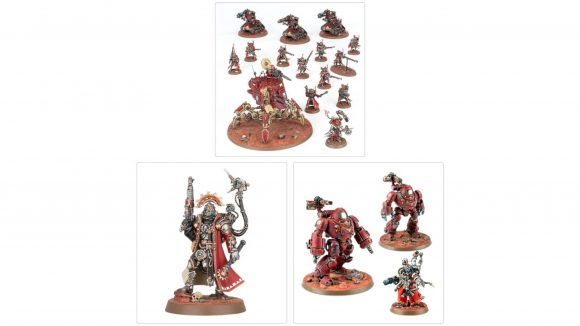 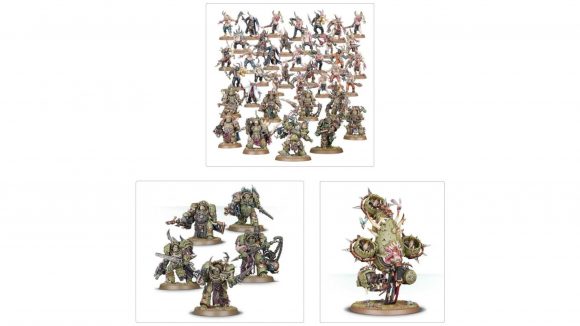 The two boxes release ahead of this year’s batch of Warhammer 40k and Age of Sigmar ‘battleforce’ sets. Revealed in a Warhammer Community post last weekend, the next slate of battleforces – which combine several units into money-saving holiday gift boxes – will be revealed this Thursday, November 18. They’re designed to be solid starter armies and, in past years, have represented some hefty discounts.

If you haven’t yet had your fill of machine-worshipping cultists, read our Adeptus Mechancius guide, in which we walk you through the army’s lore, characters, and strategies. Or, if putrid flesh and rancid bile are more your flavour, check out our Death Guard guide for the lowdown on this Chaos faction.