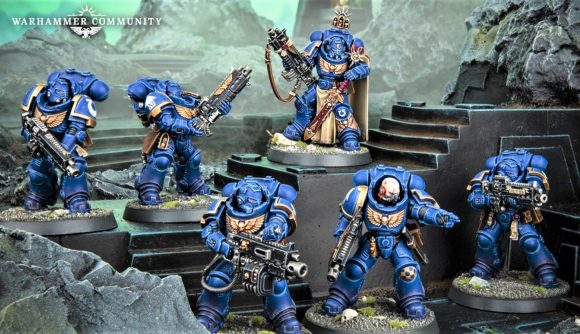 In a Warhammer Community post yesterday, Games Workshop confirmed that the basic statline of Warhammer 40K‘s (so far unreleased) Heavy Intercessors unit – a chunky, heavy-armoured Troops choice for the Space Marines – would extend to its Kill Team skirmish game mode. The firm also reaffirmed some details about their weapons and Kill Team-specific rules. Compared to their less-swole Intercessor brothers (the basic troops for Primaris Space Marines) the new Heavies will have an additional wound (for 3 total, the same as a Terminator) and one more point of Toughness (at 5), balanced out by one inch less movement range (for 5”).

As for weapons: their standard issue Heavy Bolt Rifle will be Strength 5 and feature a choice of Deathwatch-style specialised ammunition types, the post confirms, and they’ll have the option of wielding two new Heavy Bolter variants – the Executor and the Hellfire. The Executor fires two shots a turn, dealing a horrendous 3 Damage each, while the Hellfire spits out 4 shots (at the Heavy Bolter’s new standard, Damage 2).

The post also confirms that, in Kill Team games, each marine can be individually kitted out with their own choice of Heavy Bolt Rifle ammo, while, in 40K, every squad member has to use the same bullets. Heavy Intercessors will also be the only Primaris marines able to benefit from Kill Team’s ‘Heavy’ specialist rule, to better handle those sick new Heavy Bolter variants in your short-range firefights.

These rules had been glimpsed when the Heavy Intercessors were revealed in a preview back in September 2020, and the new unit’s datasheet featured in Space Marines’ new 9th Edition codex, released the following month. But this latest update affirms that the Gravis-armoured Heavy Intercessors will be just as potent on Kill Team’s smaller-scale, squad-to-squad fighting as they will on the six-foot tables of 40K. 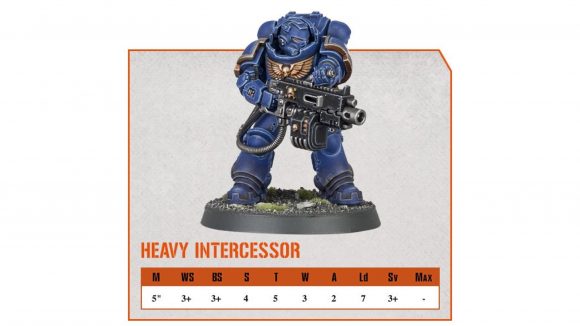 The reveals come as part of GW’s ‘run-up’ promotional teasers for the new Kill Team: Pariah Nexus boxed expansion, which will initially be your only way to lay your hands on the Heavy Intercessor models. The set is going up for pre-order on February 27, which should see it release on March 6. As usual, we won’t know the price for sure until pre-orders are live, but scuttlebutt suggests something in the neighbourhood of $160 / £114, which tallies with previous, similarly-sized box-sets.

The Pariah Nexus box also packs in a squad of the gruesome new plastic Necron Flayed Ones, and the new Chronomancer Cryptek variant, along with a stack of Necron Tomb World-themed scenery and other accoutrements. None of these will be sold separately for some time, either – which has led to some ire among hobbyists desperate for their next Space Marine or ‘Crons unit, but who don’t necessarily want to pay upwards of $100 for a Kill Team boxed set to get them. 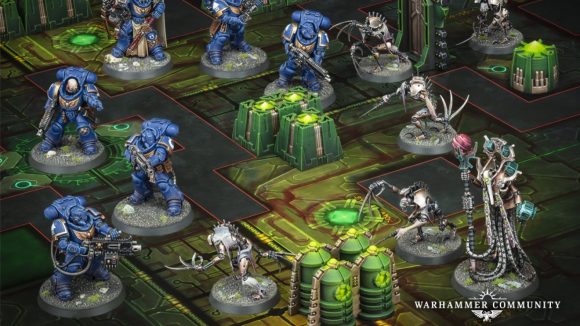 Heavy Intercessors themselves have been the topic of some heated discussions in the 40K community since they were first announced, with some players concerned they will become an unreasonably powerful and resilient all-round unit in an army (Space Marines) that remains very competitive, and already has a large roster of resilient, powerful damage-dealing units.

Nevertheless, we can expect the Pariah Nexus kit pre-orders to sell strongly, with legions of huffy Space Marine players grudgingly opening their wallets to get hold of the new chonky bois to fill out their backline, or steam forwards into fire to capture those key battlefield objectives.

Wanna know more about the mighty Adeptus Astartes? Check out our Imperium factions guide. Prefer the eternal, shiny chrome of the Necrons? Well, better head to our Xenos factions guide to learn all about ‘em.