Warhammer 40k and Age of Sigmar maker Games Workshop has released a strongly worded statement denouncing “hate groups” and “adherents of historical ideologies better left in the past”, and reiterating that Warhammer 40k’s Imperium faction – a totalitarian theocratic empire which shares many traits with real-world historical totalitarian regimes – is a dark satire intended as a “cautionary tale”, rather than anything to be imitated or glorified.

In the statement, published on GW’s Warhammer Community site on Friday, the firm called out groups that “seek to claim intellectual properties for their own enjoyment, and to co-opt them for their own agendas”, claiming that such people wilfully misunderstand what Warhammer 40k’s fiction is all about – and promising that the firm would exclude them from Warhammer stores and events in future.

From the statement: “If you come to a Games Workshop event or store and behave to the contrary, including wearing the symbols of real-world hate groups, you will be asked to leave. We won’t let you participate. We don’t want your money. We don’t want you in the Warhammer community.”

There was no mention in the statement of any explicit rules or code of conduct under which the firm would be taking such action against would-be customers and event participants it judged to be representing hate groups.

However, the statement did encourage third party Warhammer event organisers to adopt a similar official position – and highlighted the work of GW’s Warhammer Alliance programme, which supports and funds Warhammer clubs for children and young people, saying the programme aimed to help “provide a creative and educational outlet, building a community of shared belonging and respect between young people from all walks of life”.

This is the second time in recent years that Games Workshop has made a corporate statement acknowledging the problem its games and community has with diversity, inclusion, and the malign influences of right wing actors – and it’s markedly more explicit than the first.

The above social media message, entitled ‘Warhammer is for Everyone’, went out in June 2020, broadly decrying prejudice and hate in the Warhammer community. It had a generally very positive response from (most) fans – but that statement’s vagueness left many in doubt as to what action would be taken. 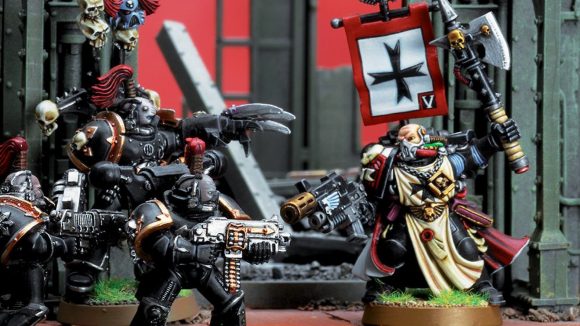 It also did not mention any intellectual link between Warhammer 40k’s fiction and the attitudes of toxic right wing individuals in the hobby, co-opting 40k’s problematic ‘protagonist’ Imperium faction to legitimise their own views on real-world fascism.

With this latest statement, GW has now admitted that link to an unprecedented extent – but fans will be watching to see what concrete change comes of it.