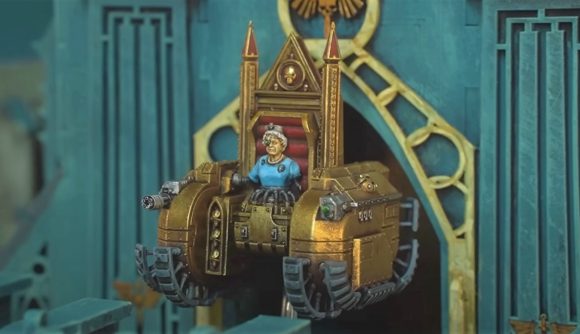 In the last four days, the UK has been buried under piles of bunting, flags, and sponge cake to mark 70 years of the queen on the throne – either a pretty big deal or a massive waste of time, depending who you ask. The Platinum Jubilee celebrations have even spread over to the world of Warhammer 40k (unofficially) with this 3D-printable model of Queen Elizabeth designed for use on the tabletop – freely available, and with fan-made rules to boot.

The Warhammer 40k Queen Elizabeth model, dubbed Lillibet, Potentate of Holy Terra, was created through a collaboration between Warhammer and miniature painting Youtuber Midwinter Minis, and 40k artist Little Plastic People (aka Steve). The mini is a cyborg version of Her Majesty ready for war, her torso fixed to a golden hover-throne that bristles with weapons. The pair unveiled Lillibet, and released free 3D printer files for the model, designed by Steve, on Friday, one day into the ‘Platy Jubes’ celebrations.

Guy from Midwinter Minis also released a video on Friday showing off the model in all its glory, and sharing the building and painting process, as well as the homebrew rules he devised.

Lillibet, Potentate of Holy Terra is a 280pt command unit armed with a long range Subjugator Cannon and more powerful Decapitation Lance blast weapon to use when she gets within 18 inches. Her Grav-shock Field melee weapon has the interesting ability of pinging all units engaged in combat with her away – making them fall back their max movement. She hits on 2s in the fight and shooting phase, has eight wounds, and is also a mighty psyker. 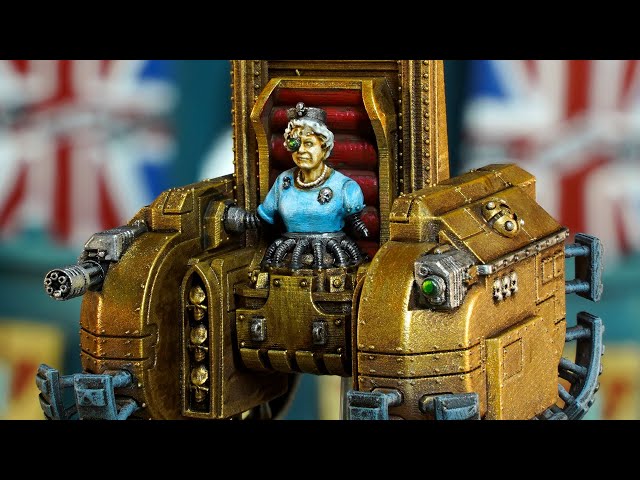 The fan-made Lillibet model also boasts four unique abilities all named and themed after lines of the United Kingdom’s national anthem: Send Her Victorious, Happy and Glorious, Long to Reign Over Us, and God Save The Queen. Among other effects, these give her a 4+ invulnerability save and make her impossible to kill once she’s down to a single wound, unless her controller rolls a 1. Her Maj is pretty darn resilient!

It’s unclear how she and her throne made it to the 41st millenium, but Queen Elizabeth looks to be a mighty asset to the Imperium. Check out our Imperium factions guide for more, ahem, official information on the forces of humanity.