If you’re looking for a 3D printer to print miniatures and figures for tabletop RPGs – or for any of your other gaming needs for that matter – then you’re in the right place. Here, we’ll share the best 3D printers for producing minis and board game components, as well as what you should consider if you’re thinking of splashing out on one.

The good news is that 3D printing technology is only getting better. It wasn’t long ago that 3D printing could only be done on an industrial scale. Now, it’s perfectly possible to find an affordable 3D printer for miniatures that’s appropriate for home use, which is why printing minis is becoming increasingly mainstream. But that growing popularity has led to an explosion of choice. When everyone and their dog is trying to sell you a 3D printer, it can be hard to know where to look. Especially if you don’t speak dog.

There’s a very good reason for the rise of 3D printing, though, at least among boardgaming and tabletop communities. Having the power to print your own miniatures from scratch feels like magic. There’s an illicit thrill to it, as though you’ve seized the means of production. You’re in command now, and, if you want all your minis to have three heads and no arms, then that’s what they’ll damn well have.

3D printing lets you explore minis beyond what’s on the market. You can create pieces for kitbashes or head swaps, or batch print a whole army from scratch. It can quickly become a new and addictive hobby in itself. Also, if your purchasing habits are anything like ours, 3D printing may well save you some cash in the long run.

But before we properly dig into profiling the best 3D printers for miniatures, there are some vital basics to take you through – so, if you’re a newbie, read on to learn about all things materials, features, and key stats. Alternatively, if you’d rather dive straight in, then…

These are the best 3D printers for miniatures: 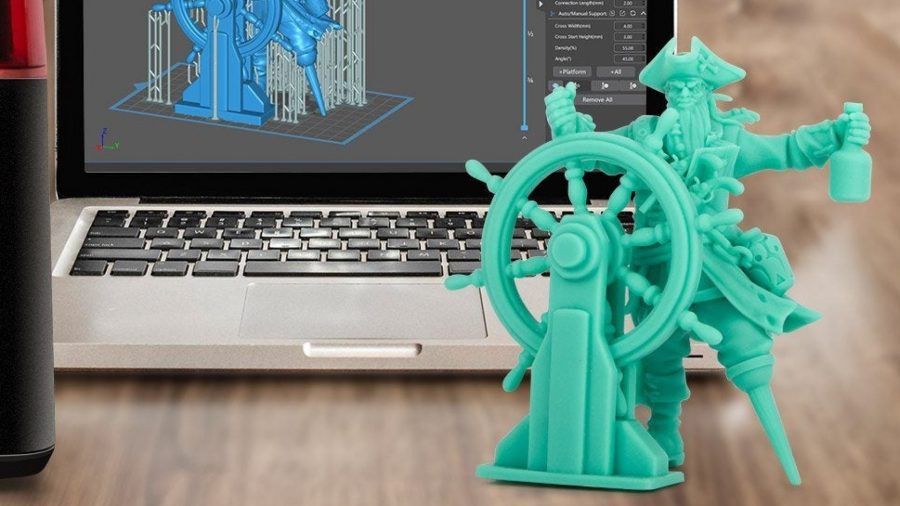 There are essentially two types of 3D printer to be aware of. Fused Deposition Modelling (FDM) printers – which place down layer after layer of melted plastic – and Stereolithography (SLA) printers, which use UV light to harden a liquid resin that forms the desired shape. There’s a ton of subcategories, and a jugful of jargon to go with them, but there’s no need to get too far into the boring stuff now: it basically boils down to resin vs thermoplastics.

There are advantages and disadvantages to each kind, but – crucially – FDM printers (using plastics) are, as a rule, not precise enough to produce detailed miniatures. They’re perfectly good – in fact we recommend them – for creating large-scale terrain pieces; but, for smaller models, you won’t be able to get the results you’re after. Layer lines will typically be visible, while fine details are likely to be lost.

Resin printers have their own pitfalls, too. Firstly, resin is toxic, so, while all 3D printing demands a well-ventilated space, with SLA you have to be particularly careful; basic safety precautions like gloves and masks are a must. Another thing to know is that, partly because of the extra detail it enables, SLA printing tends to take longer than FDM. And finally, printer resin costs more than plastic filament, so your operating costs are likely to be higher. But all this is the price you’ll pay if you want a 3D printer that creates miniatures of the highest quality (and without any misshapen features or unwanted ridges). 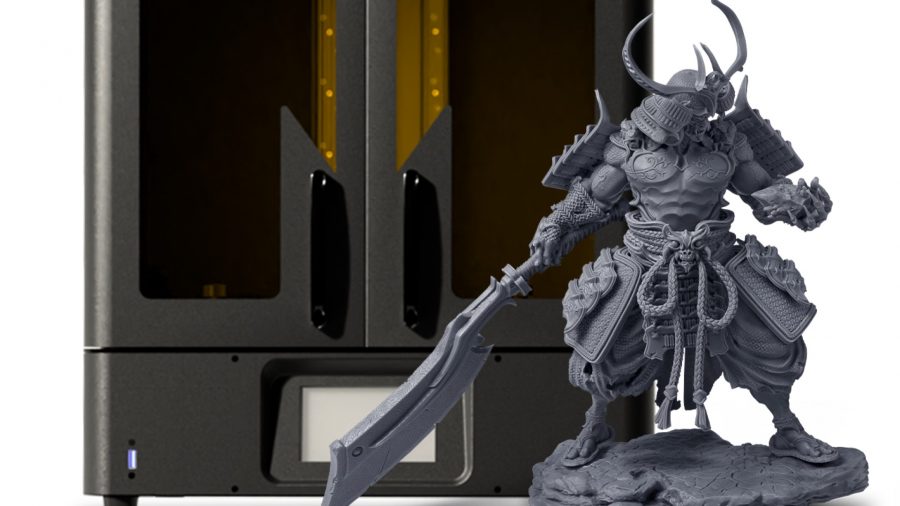 These days, every gadget – from TVs, to cameras, to (now) 3D printers – wants to boast about its super-duper, extra-special ‘high resolution’. But it’s not always clear what that actually means in real terms.

In 3D printing, the key value to look for is the XY resolution, measured in microns. This tells you the smallest possible motion the machine’s print head can make within a single layer. Another key figure, the Z resolution, determines how thin each layer can be. For both XY and Z, smaller is better. To achieve quality miniatures for the tabletop, resolutions of 50 microns or less are excellent, though they don’t necessarily guarantee quality results – particularly if the printer only has a high resolution in one direction.

What is it good for: The best war board games of all time

Another stat to check is the build volume. If the resolution is how small and detailed your models can get, the build volume is the opposite – how large you can go. It’s best to think ahead and be realistic about what you’ll use your 3D printer for. How mini are your minis? Will you be able to restrict yourself to 28mm scale humanoids, or will you quickly be hankering for an enormous demon figure and then a ruined castle turret for him to live in? You might be able to create large models by approaching them in multiple stages, but a good build volume will save you the trouble.

The final quality to watch out for is ease of use. You’re probably aware that owning and operating a 3D printer can be a fiddly business, but you may not know that it’s getting easier with each new release. Before you pick a printer, do some research on how much setup and maintenance is likely to be required. It also helps if there is an active community around your chosen machine, as this makes it far easier to troubleshoot and get help when necessary.

Still with us after that quick but dense primer? Head not swimming, eyes unglazed? Good, because it’s time to get stuck into our list of the best 3D printers for miniatures: 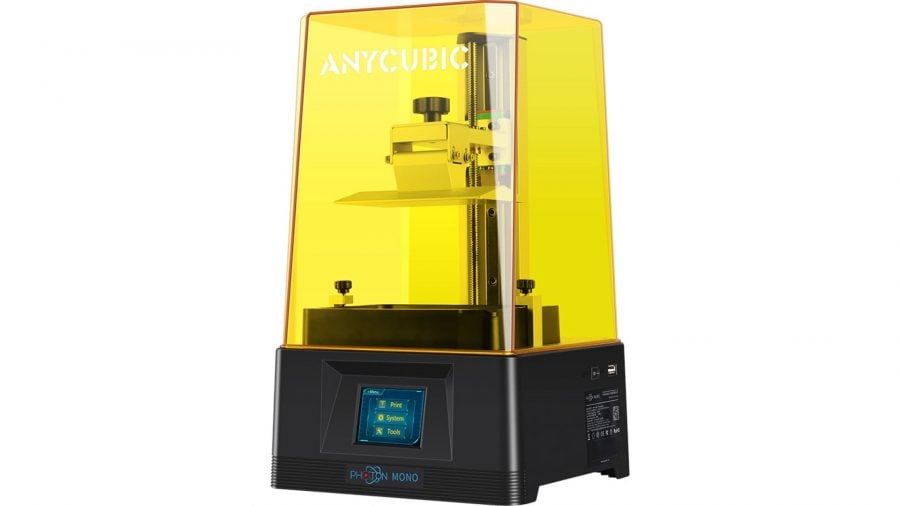 When we say the Anycubic Photon Mono is a good entry level printer, it’s not because there’s anything low-quality about the results it delivers. Indeed, with an XY resolution of 51 microns, it may not be the most detailed 3D printer on the market, but it’s still pretty precise.

Where the Anycubic Photon Mono really wins out, however, is in price, speed, and usability. It’s cheap, very simple to set up out of the box, and – because it uses an LCD screen to reflect UV light onto the resin (rather than just using a laser like the earliest SLA printers) – printing times are nice and short, each layer taking 1-2 seconds.

One limitation with this 3D printer is a relatively low build volume. You can’t go above a height of 165mm (6.5 inches), so, while the Anycubic Photon Mono is ideal for printing regular D&D minis, large-scale terrain and tanks may be a no-go. Still, if that’s not an issue for you, the Anycubic Photon Mono will do the job, and do it well – plus, at $199 / £147, it’s a blooming bargain. 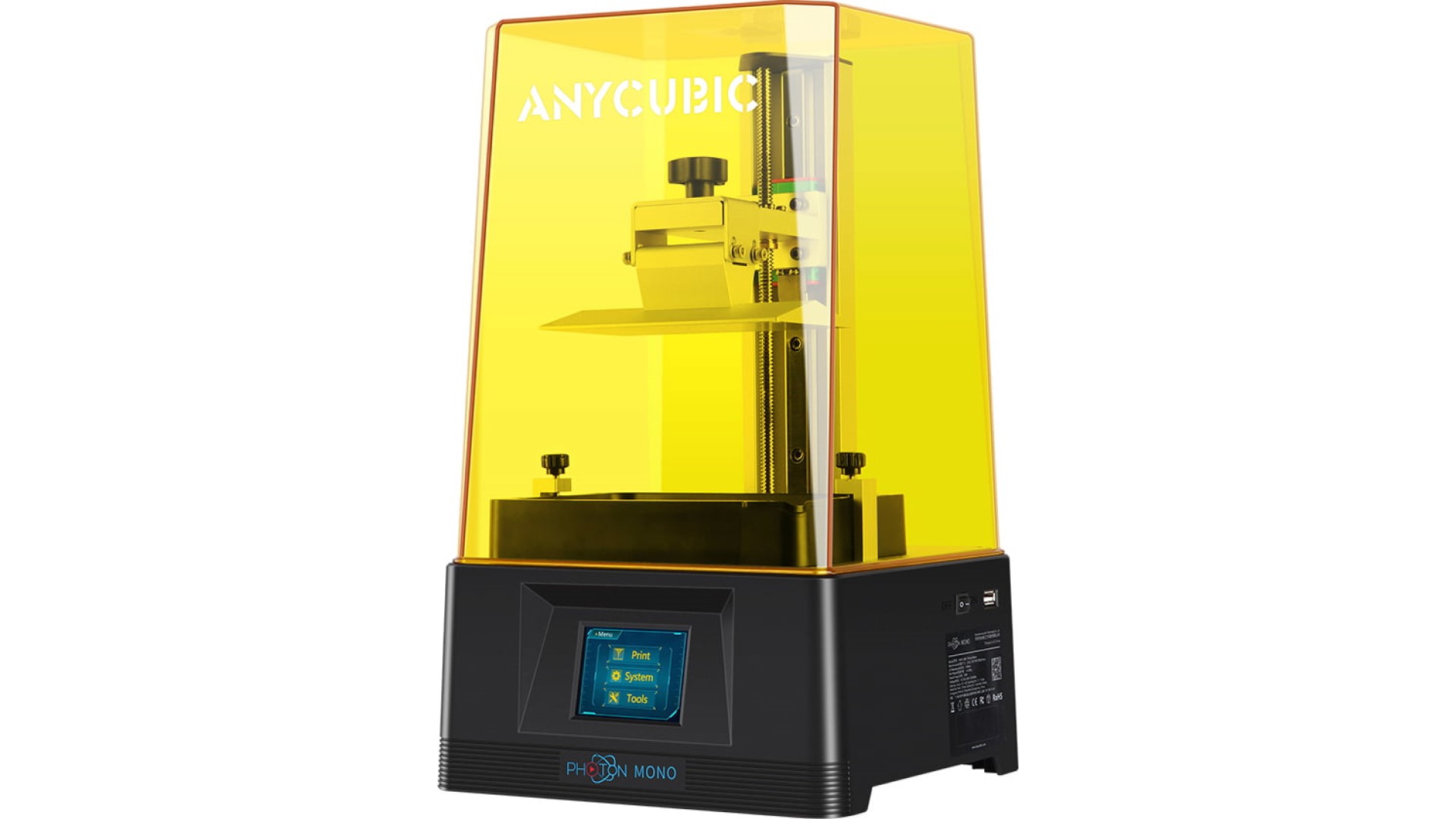 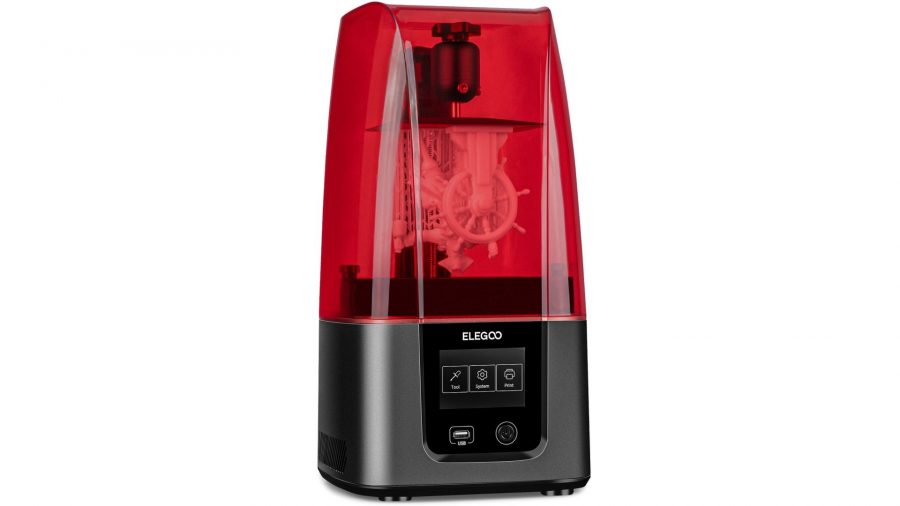 Released just last autumn, the ELEGOO Mars 3 is a dainty bit of kit, weighing in at only 5.2 kg. It’s got fantastic precision for the asking price of $468 / £346, with a very impressive XY resolution of 35 microns and a minute minimum layer thickness (Z resolution) of 10 microns. It boasts some nice quality of life features, such as a front-facing USB port and simple but sizable touchscreen, though sadly it lacks a WiFi connection. It’s also fast – managing one layer every 2.5 seconds – and easy to use: calibrating the build plate is child’s play.

Rising to the top: These are the best tabletop RPGs

With excellent ease-of-use, speed, and precision, in terms of bang for your buck, the ELEGOO Mars 3 is hard to beat. Which is why we’ve dubbed it the best 3D printer for miniatures overall. 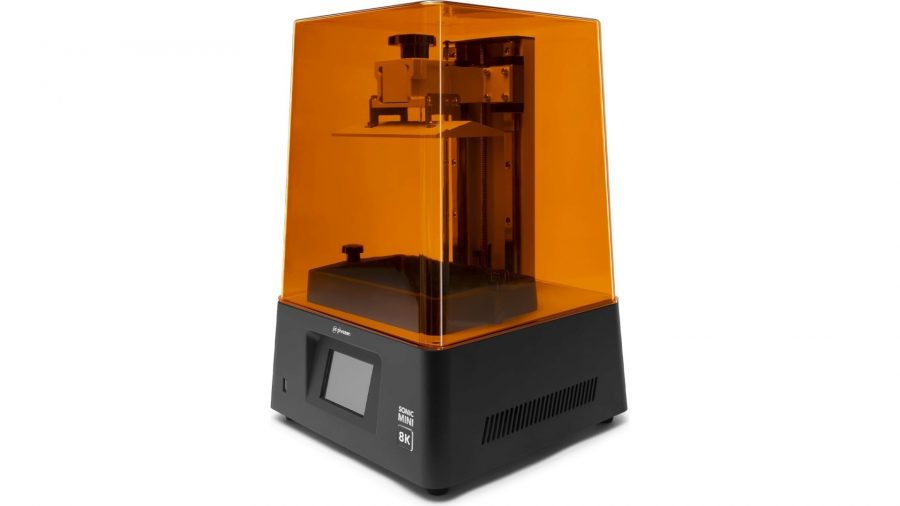 But if you’re not satisfied with a 3D Printer that can be owned by the hoi polloi, want something a bit more luxurious, and are prepared to fork out the cash ($801 / £592) for a top-shelf home 3D printer, the Phrozen Sonic Mini 8K is a good bet. It manages an extremely powerful XY resolution of 22 microns, to go with a Z resolution of 10 microns, and – despite the ‘mini’ in its name – has a comparable build volume to our previous recommendations. Currently available to preorder, you won’t find a better 3D printer than the Phrozen Sonic Mini 8K.

…Actually, you might. But you came to a guide for 3D printers for miniatures and wargaming and not for industrial 3D printers, so this is the highest quality you’re going to require, and we’re not going to enable you by showing you anything pricier.

Okay fine, there’s also the $1700 / £1260 Phrozen Sonic Mega 8K (with a mighty, mighty build volume of 330 x 185 x 400mm) if you really need to print, let’s say, a ginormous dragon god Tiamat with every scale lovingly rendered or something. But really, we think you’re just getting silly now. 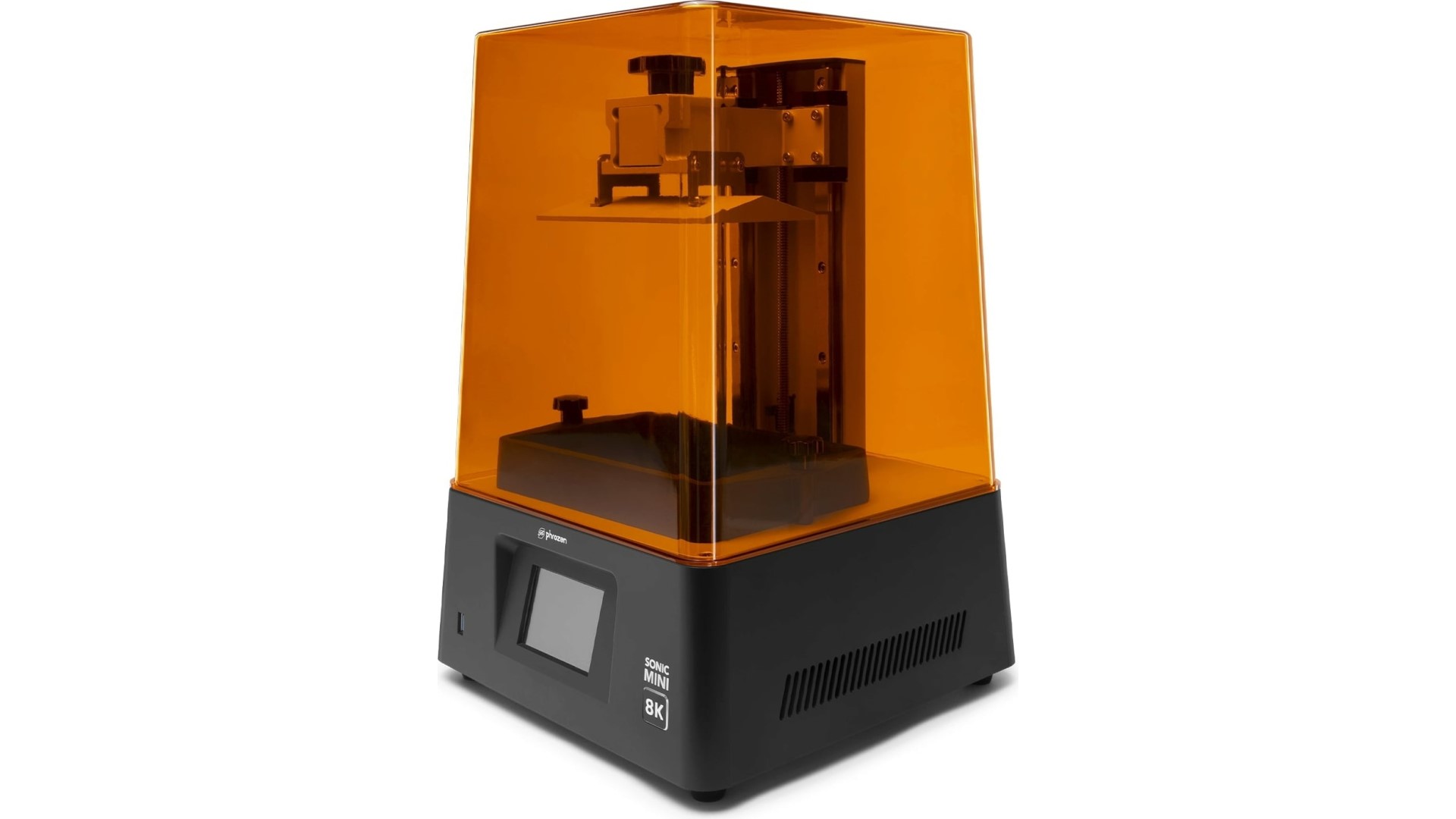 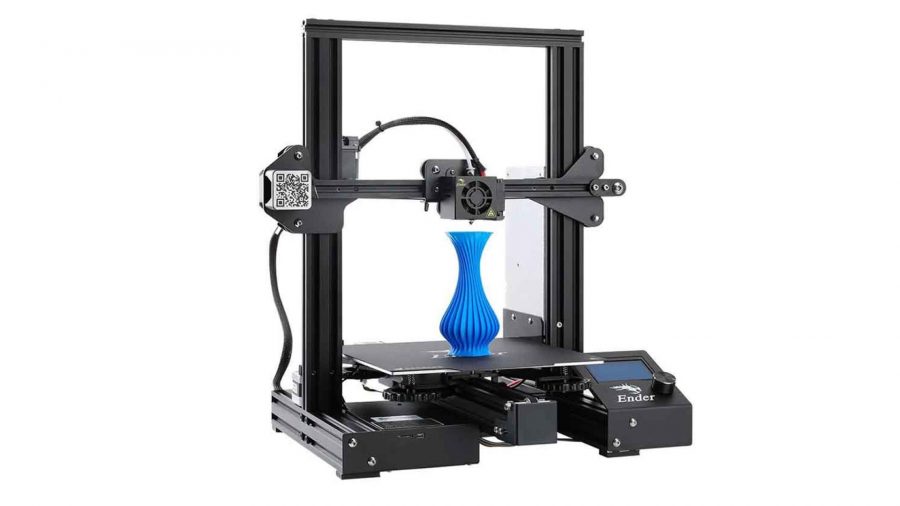 Quickly dipping back to a price that won’t make you wince, and a bit of break from the norm, the Creality Ender 3 Pro is one of those plastic FDM 3D printers we mentioned. But, before you start hissing and spitting, you should know Creality Ender printers have diehard fans in RPG communities, and for good reason.

One of those good reasons is they all have really large build volumes while keeping prices low. With the Creality Ender 3 Pro you’ve got 220 x 220 x 250mm to work with, making it ideal for larger projects. It’s a superb pick if you’ve already got more models than you can ever feasibly paint (you know who you are) and want to experiment with crafting battlefield terrain and arenas instead. No one likes purchasing terrain when they could be buying more minis, so this 3D printer can certainly help you branch out.

Back to school: Check out our D&D classes guide

Whereas most of the printers we’ve recommended so far come pretty much ready to go, with just a bit of calibration to do and some simple instructions to follow, the Creality Ender 3 Pro requires a bit more assembly. It’s a good 3D printer if you’re a dyed-in-the-wool tinkerer though, as, with a bit of care, you can achieve surprisingly high quality results, even with smaller models.

The prequel printer Creality Ender 3 might be an even better option on that front though, as while the Pro has a few upgrades (it’s quieter for one thing), the original is completely open source, from firmware to print files to schematics.