Steadfast and determined, Warhammer 40k’s Rogal Dorn was the bulwark of the Imperium and one of the Primarchs with the most pivotal roles to play in the Horus Heresy. The Warhammer 40k universe wouldn’t be the same without Rogal Dorn in it, defender of humanity, shield of the Emperor, and Praetorian of Terra.

The first Lord Commander of the Imperium, Warhammer 40k’s Rogal Dorn embodied a role of fierce protection over the most valuable of the Imperium’s treasures. Blessed with an almost innate understanding of battlefield tactics and defensive siegecraft, he helped ensure humanity’s survival through the most dire of crises – including the infamous Siege of Terra.

Though Rogal Dorn is a name familiar to many, he’s not always been the Primarch at the centre of novels or narratives. We’ve taken the time to compile a primer on this Primarch, giving you some of the answers you may be seeking about the original Imperial Fist. So if you’re looking to expand your Warhammer 40k lore knowledge or simply an Imperial Fists fan wanting to bone up on their Primarch, this is the place for you.

Here’s what to know about Rogal Dorn: 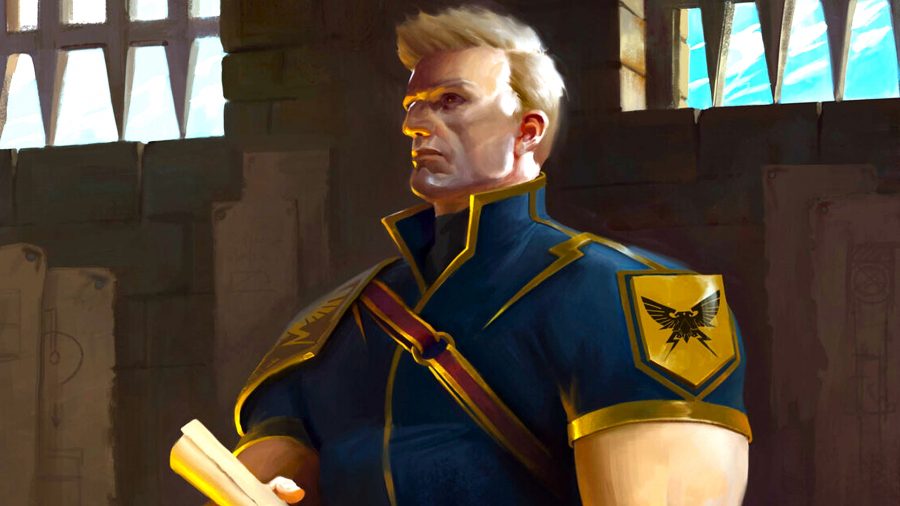 Who is Rogal Dorn?

Rogal Dorn’s earliest days are shrouded in mystery, though it does appear that, after being spirited away from Terra by the forces of Chaos, his infant form was deposited on or near the ice planet of Inwit. Raised by the planet’s noble House of Dorn, he became ruler of the entire world as his legend and power grew. When finally the Emperor came calling, Rogal Dorn gladly joined the Great Crusade across the galaxy to reunite humanity under the rule of the Imperium.

See what Rogal Dorn got up to in the Civil War with our expert guide to reading the Horus Heresy books, or take a tour of the other Chapters in our guide to Warhammer 40k Space Marines.

Many years of war ensued, with Rogal Dorn being given command of the Imperial Fists, a Space Marine chapter derived from his genetic material. Dressed in distinctive armour of copper and gold, he helped lead the Imperial Fists to victory over countless planets, often leaving defensive structures that made them citadels against the foes of humanity.

The Great Crusade would not last forever, however – and, when the Emperor handed over the mantle of Warmaster to Horus, Rogal Dorn and the Imperial Fists were ordered back to Terra alongside their master. This meant that, when civil war broke out, with many Primarchs and Space Marine chapters turning traitor, Rogal Dorn was ideally placed to lead the fortification of Terra and the Imperial Palace. 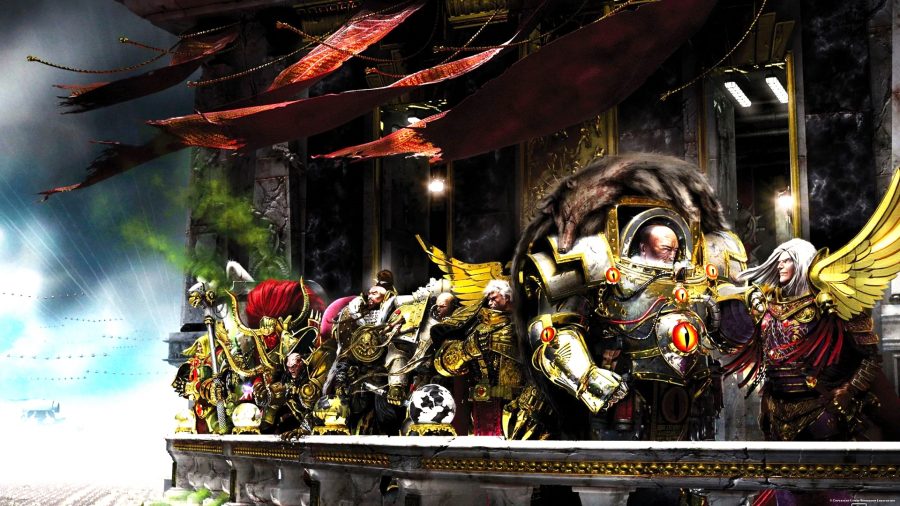 Given the title of Lord Commander of the Imperium, Dorn oversaw not only the transformation of Terra into a fortress world, but also directed many of the loyalist armies throughout the Imperium. Through this time, he effectively frustrated many rebel plans, including an attempt by the Alpha Legion’s Alpharius to strike at Pluto, the centre of the Sol System’s outer defence network. There, it’s alleged that Rogal Dorn slew Alpharius, though – with Alpharius being Alpharius – it is impossible to corroborate this.

As the ‘Solar War’ approached its climax and the final Siege of Terra commenced, it was Rogal Dorn who held the line repeatedly against his former brethren and their Chaos allies. Though the loyalists fought a slowly retreating defensive line, Dorn was always present, directing troops and organising defences wherever he could. Though a superhuman, three months of siege warfare took a heavy toll, leading him to slow and begin to make small mistakes – something utterly unforgivable for the stern Praetorian. 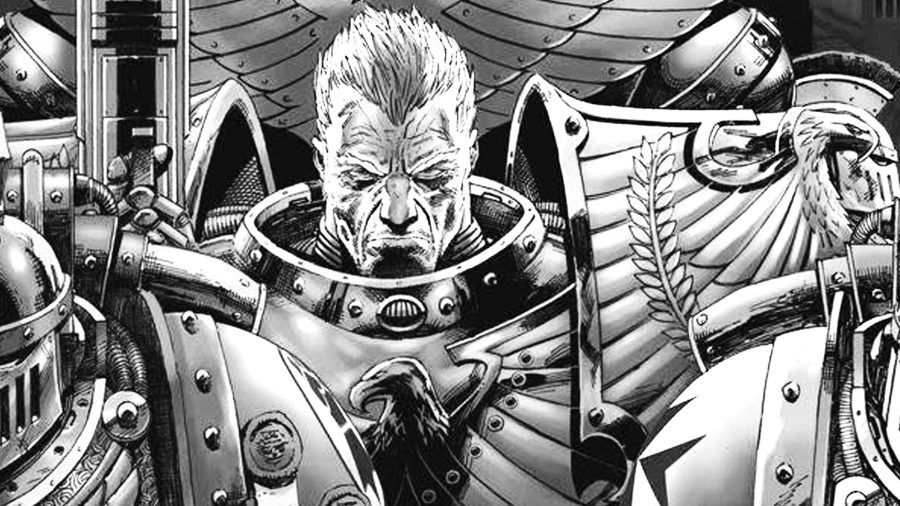 The Siege of Terra came to an abrupt end when Rogal Dorn, Sanguinius, and the Emperor struck at Horus directly on his battle barge, the Vengeful Spirit.

It was Dorn who returned the body of Sanguinius to his Blood Angels, and Dorn who brought the shattered form of the Emperor back to Terra to be interred in the Golden Throne. It was also Dorn who heard the Emperor’s final commands, moments before taking his eternal throne. Following the end of the battle, Rogal Dorn was overwhelmed with grief and guilt for his perceived failings. When the order came from his brother Roboute Guilliman to split his forces into smaller chapters, to ensure that no one Space Marine chapter would be able to wreak such havoc ever again, Dorn retreated into a horrific device known as the Pain Glove to meditate for guidance. 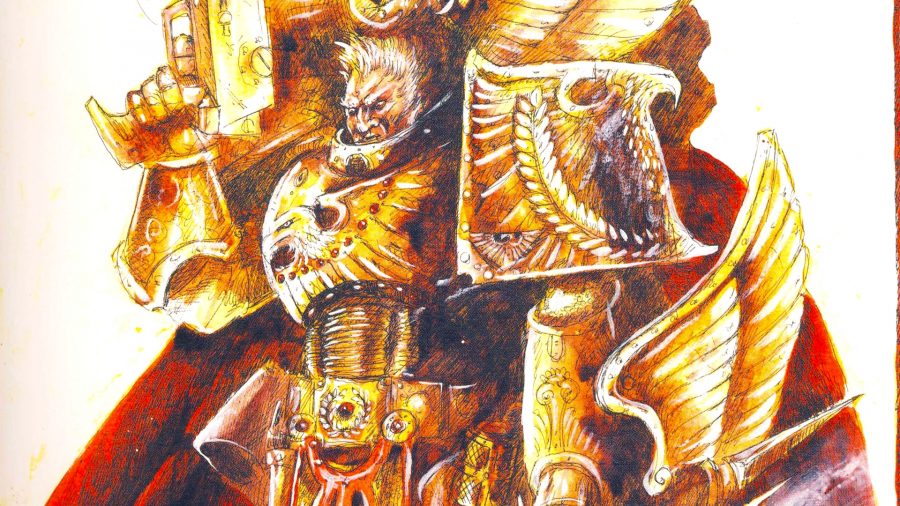 Through meditation and the pain inflicted through the device, Rogal Dorn divined that his Imperial Fists needed to be redeemed.

A scourging was the answer that Dorn decided upon, leading his Imperial Fists in a siege to destroy the most well defended fortress of the traitor Iron Warriors legion, the Iron Cage.

It’s here that the Imperial Fists gained their reputation for zealotry as they stood, bright eyed and full of hate for the foes of the Imperium, mowing down their former Space Marine brothers without remorse.

After the Iron Cage, Rogal Dorn accepted the decision to split the Imperial Fists, forming three chapters: the zealous Black Templars, the rational but untested Crimson Fists, and the devoted Imperial Fists. 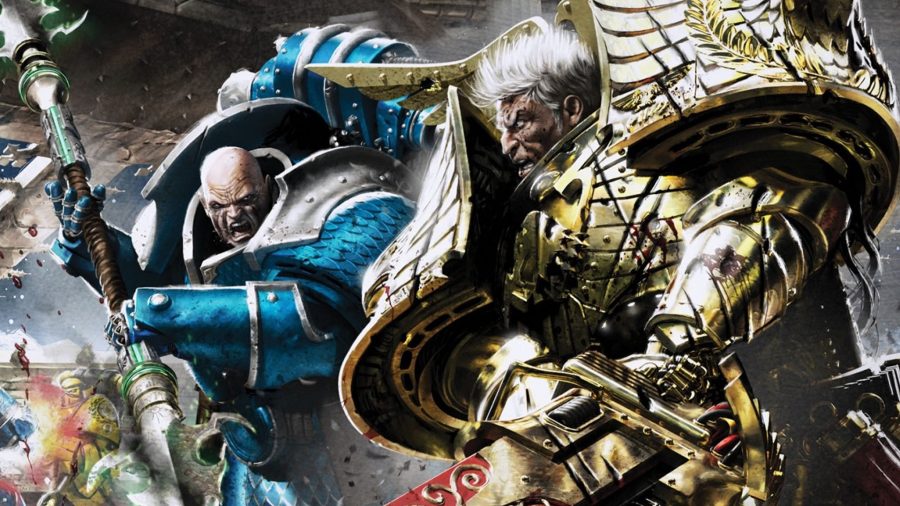 Where is Rogal Dorn in Warhammer 40k?

Like many Primarchs in the Warhammer 40k setting, the exact whereabouts of Rogal Dorn in the 41st millennium is not currently known. At least, the whereabouts of the majority of him is not known.

Finding only his hand, the Imperial Fists thought Dorn dead

After an assault on a Chaos fleet that outnumbered his own force, Rogal Dorn led an attack upon the bridge of the Despoiler Class Battleship Sword of Sacrilege. This was the last anyone saw of the Primarch, as he disappeared during the battle. Only his hand was retrieved, leading his Imperial Fist sons to determine that their Primarch had been slain.

Now his skeletal fist is kept in stasis in a holy shrine deep within the Imperial Fists’ Fortress Monastery, Phalanx. The bones are covered in scrimshawed heraldry, with each Chapter Master carving their name in minute script upon its surface. 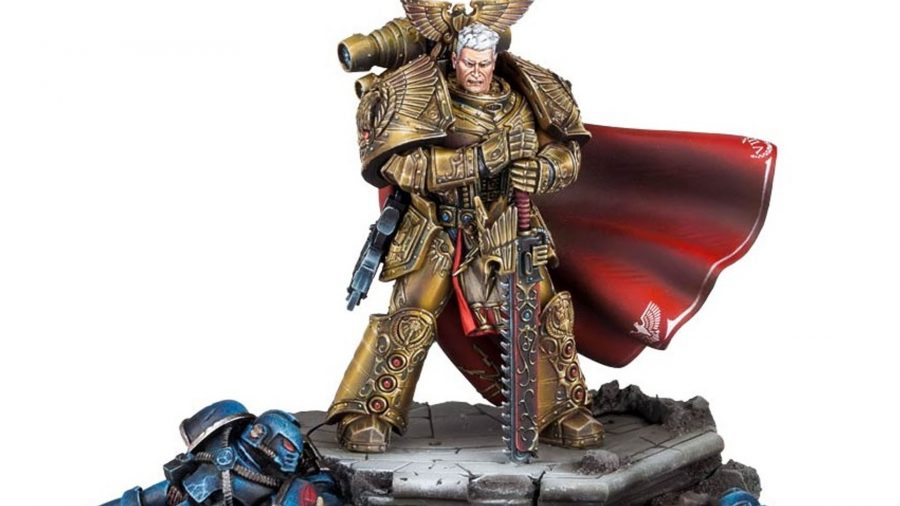 Games Workshop, via its Forge World division, has crafted a model of Rogal Dorn to stand with your Imperial Fists armies upon the tabletop. He stands, cloak fluttering in the wind, atop a pile of debris and traitor corpses, his colossal chainsword Storm’s Teeth resting in his grip.

Like other Primarchs, there is no official way to play Rogal Dorn in Warhammer 40k, but rules do exist for deploying him in Horus Heresy battles.

If you’re familiar with Rogal Dorn and the Imperial Fists, you’ll not be surprised to learn that, on the tabletop, he grants considerable resolve to the Space Marines he fights alongside.

Other Space Marines can use his Leadership for Morale checks and, in addition, Imperial Fists gain +D3 to Combat Resolution while he remains on the board, greatly enhancing the resilience of any army fielding him. 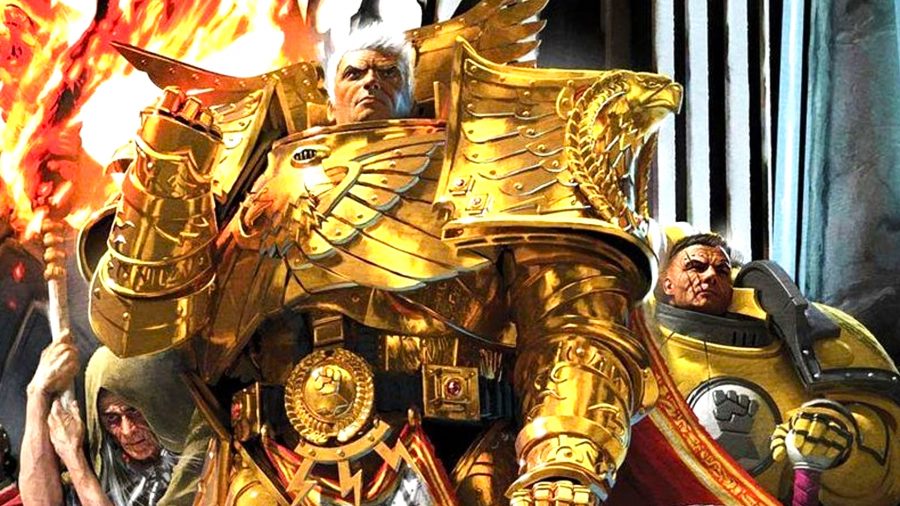 As a living shield, he comes with a 2+ Armour Save and a 4+ Invulnerable Save, similar to other Primarchs. However, in addition, no attack can wound Rogal Dorn unless a 3+ is rolled, enhancing his survivability considerably.

Dorn is a doughty warrior when deployed in 30k games

When it comes to fighting, his ranged weapon The Voice of Terra is a solidly strong Boltgun firmly capable of ploughing shots into enemies. Where he excels, however, is in melee. Storm’s Teeth grants him extra attacks when toe-to-toe with a horde. If, however, he’s fighting something a little more meaty, the Sundering Blow rule allows him to halve his attacks, but greatly up the power and damage of his melee strikes.

Rogal Dorn is, as should come to no surprise, a doughty warrior when deployed into Horus Heresy tabletop battles, one who buffs his allies to increase their survivability as well as increase their ability to stand firm against overwhelming odds. Whilst he’s not the most powerful Primarch you can get your hands on, if you’re an Imperial Fists 30k player, he might make the difference between victory and death.