Warhammer 40k’s Sanguinius is half angel, half vampire, all Primarch – and one of the most famous characters in the entirety of Games Workshop’s grim, dark far future. Loved by his allies and feared by his foes, Sanguinius’ name is interwoven with much of Warhammer 40k lore, and he stands as one of the primary characters behind much of the current backstory of the tabletop wargame.

From the Horus Heresy to the 41st millennium, Warhammer 40k’s Sanguinius has both a direct and indirect influence on everything that’s happened in the Imperium of Man. His actions and those of the ceramite-clad sons of Sanguinius, the Blood Angels, have helped shape this grimdark future into the setting we love so well.

It doesn’t matter if you’re a fan of the Blood Angels or one of their successor chapters, want to learn more about pivotal characters in Warhammer 40k lore, or you’re an Eldar needing to get info on these mon-keigh, read on to get our full primer on everything Sanguinius. It’s time to delve into the Imperium’s most favourite golden boy and find out just who he is.

Here’s what to know about Warhammer 40k’s Sanguinius: 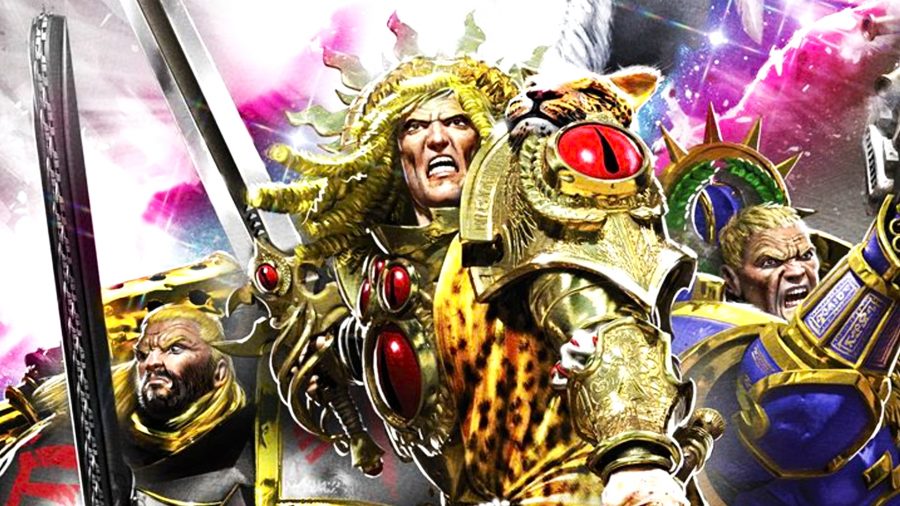 The Emperor of Man was a man with a plan. Alas, that plan went a little awry and his most powerful creations, the Primarchs, went missing as children. It took him many years to be reunited with them all, with many of them being reared on deadly worlds that tested their mettle as they grew into superhuman warriors.

See Sanguinius in action during the 31st millennium with our Horus Heresy reading order, or get up to speed on all the alternative chapters in our complete guide to Space Marines.

Sanguinius was one of these children lost in the Warp. His first home, after being spirited away from Terra, was a moon of the planet Baal, Baal Secundus – an irradiated hellhole that was death for most who trod its surface. Mankind, however, is stubborn and adaptable, and life still existed on that moon.

Rescued by a tribe known as ‘The Blood’, Sanguinius grew into a mighty warrior cursed with a fury in battle that could only be quenched by bloodshed. Other than his prodigious strength, one thing set Sanguinius apart from everyone else: his back was graced by two angelic wings that allowed him flight. 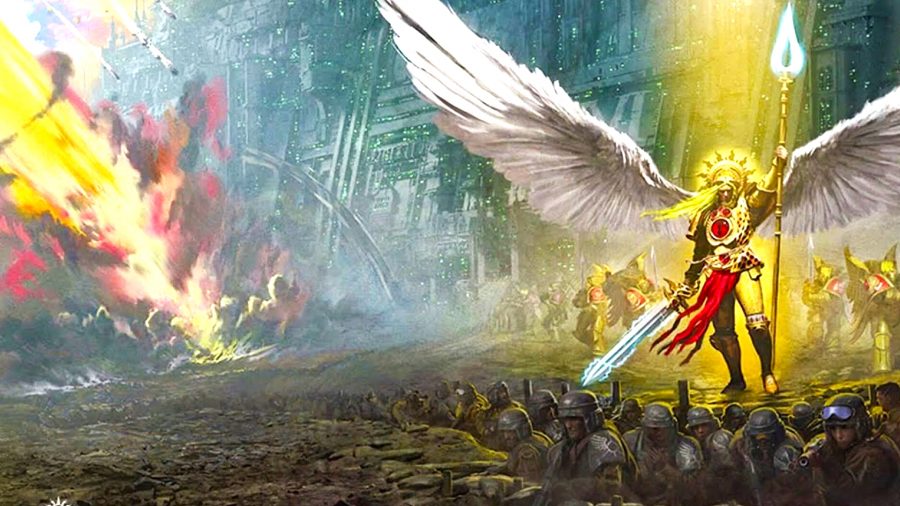 After many battles that saw The Blood become dominant over hordes of mutants, the Emperor arrived and raised his son to fight by his side, leading his own Space Marine Legion, given the title ‘Blood Angels’.

For many years, Sanguinius fought side-by-side with his Primarch brothers, becoming a confidant, counsellor, and advisor to them all – most notably the pre-eminent among them, Horus Lupercal. Sanguinius, when not under threat or in battle, had a charismatic mien and a humble attitude, leading all who knew him to love him, his brothers most of all. 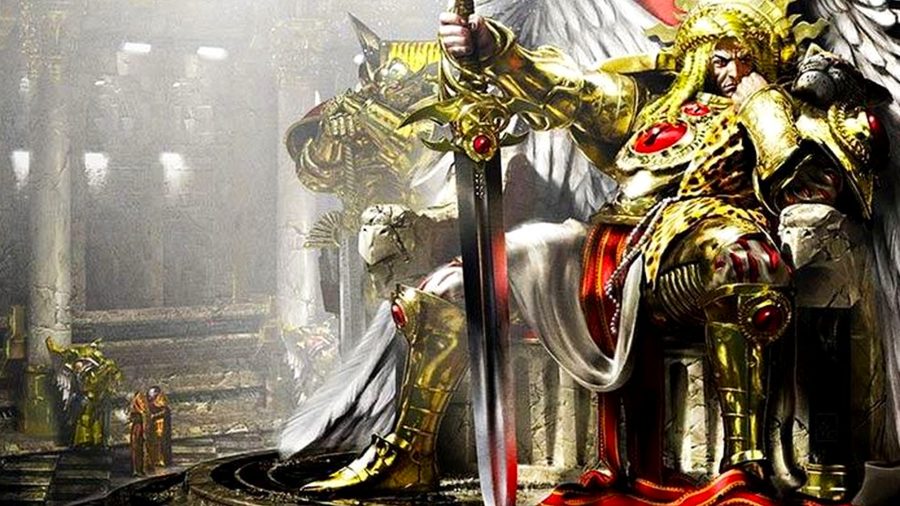 Throughout the burgeoning Imperium, Sanguinius became known as The Great Angel, a golden warrior who would descend on colossal white wings to smite the foes of humanity.

Unfortunately, and as is often the way in Warhammer, nothing is perfect forever; there was a flaw hidden inside the Blood Angels gene-seed derived from Sanguinius himself. This led the sons of Sanguinius to be cursed with the Red Thirst, an almost overwhelming need to feast on the blood of their foes. Sanguinius worked to keep this hidden from the Emperor, with only his beloved brother Horus becoming aware of the dark heart of the Blood Angels.

During the Horus Heresy, Sanguinius was loyal to the Emperor from the start. However, he was once tempted by a daemonic Keeper of Secrets, who offered him a deadly choice: join Horus and Chaos by sacrificing himself to the psychic construct known as the Ragefire, causing the Red Thirst to leave the Blood Angels – or let his gene-progeny slip into destruction. Just as Sanguinius was about to accept the bargain, Blood Angels Apothecary Meros stepped forward in his place, becoming the Red Angel, and causing Sanguinius to swear vengeance on Horus and all who follow him (the story is told in James Swallow’s 2012 novel Fear To Tread). 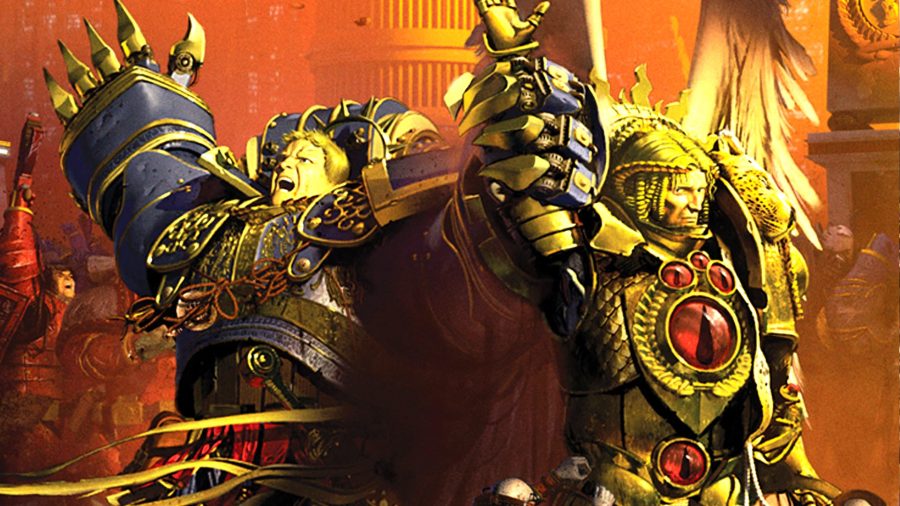 Though he was a ferocious warrior, Sanguinius’ temperament and level-headedness saw him become crowned as Emperor Regent for the Imperium Secundus, a separate Imperium set up by the Ultramarines’ Roboute Guilliman at a desperate point during the Heresy, when all contact with Terra and the Emperor had been lost. Upon learning that the Emperor still lived, Sanguinius set out on a grand pilgrimage to stand by his father’s side once more before the final battle of the Horus Heresy.

Beset by prescient visions of his own death, Sanguinius fought long and hard to defend Terra against the armies of Chaos and his fallen brother, Horus Lupercal. Finally, aboard Horus’ flagship, the Vengeful Spirit, Sanguinius faced Horus one last time. Attempts to reason with his brother failed, leading to a battle that saw Sanguinius finally killed, fulfilling his own psychic visions of the future, after only leaving a small dent in Horus’ armour. 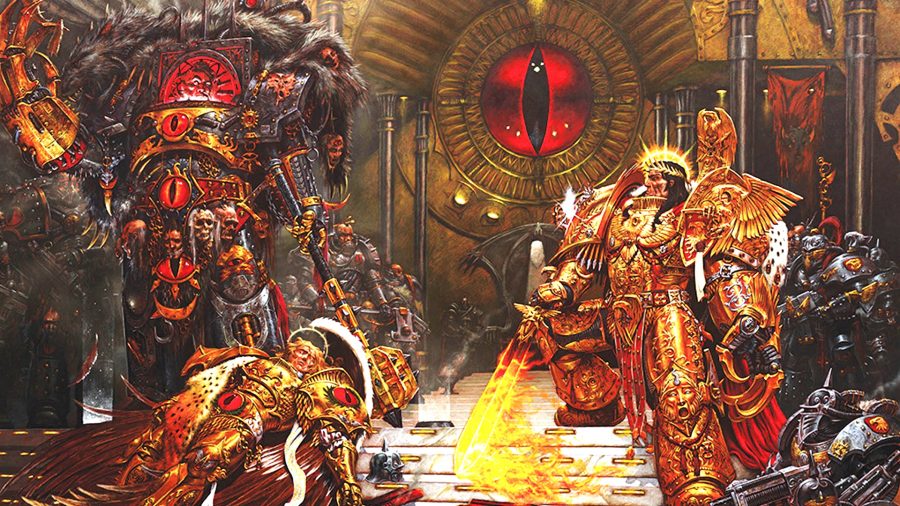 Where is Sanguinius in Warhammer 40k?

Unlike many Primarchs in Warhammer 40k, we know exactly where Sanguinius is, as his corpse was retrieved by Imperial troops as the Vengeful Spirit began to collapse around the victorious forces of Terra. His brother Rogal Dorn returned his remains to the Blood Angels, who spirited Sanguinius away and laid him to rest on his home planet of Baal, placed in a holy coffin known as the Golden Sarcophagus.

While Sanguinius does not live in the current Warhammer 40k universe, his actions still reverberate throughout the setting. Firstly, he remains an inspiration: he is heralded as the highest and purest of the Primarchs, and it’s commonly believed that his sacrifice against Horus allowed the Emperor to finally slay Horus and defeat the forces of Chaos.

The other effect that Sanguinius still wreaks upon the universe is somewhat darker. At the moment of his death, a psychic shattering exploded through the cosmos, causing many of the Blood Angels to lose themselves in utter, death-crazed madness at the pain of his passing.

The insidious threat of this Black Rage continues to this day, with many Blood Angels becoming whirlwinds of gore, hatred, and fury as Sanguinius’ tortured memories overwhelm them.

Those afflicted by this curse join the black-clad Death Company, a troop of walking dead who fear nothing, and who will fight on past wounds that would normally inflict death. Sent on the deadliest missions, the Death Company seek only an honourable end, before the Black Rage robs them of their sanity entirely. 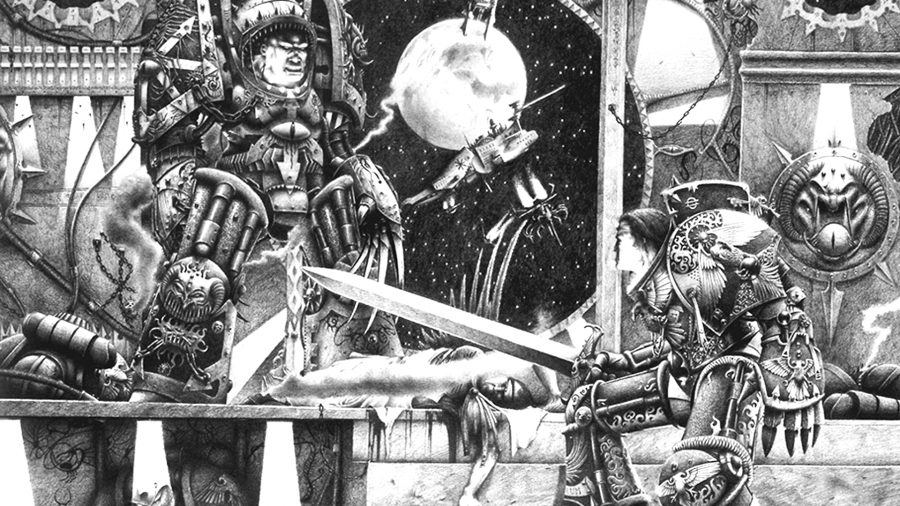 Hope exists, however, even in Warhammer 40k. For the Blood Angels, this comes in the form of Mephiston, a vampiric psyker who is their current Chief Librarian. Once known as Brother Calistarius, he fell to the Black Rage, rampaging until he fell in battle under a collapsing building.

Unlike his brothers, he survived the collapse, and the tide of the Black Rage subsided. No-one understands why this would be – but it may suggest that, one day, the Blood Angels could fight without fear of their own darker nature. 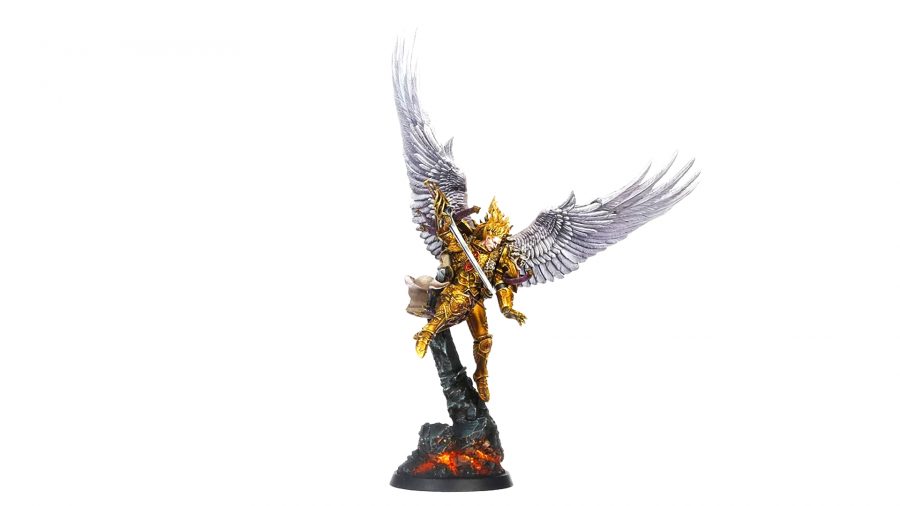 Like many Primarchs, Sanguinius has a model available for purchase form Forge World, showing The Great Angel clad in his golden armour, wings spread wide as he descends to devastate his foes with a deadly strike.

While rules do not exist for Sanguinius in Warhammer 40k, official rules do exist which will let you field him in the 30k variant, Warhammer: The Horus Heresy. On the tabletop, Sanguinius’ rules allow him to move fast and strike hard, as befits his station as The Great Angel. His fury is also reflected in the rules, as charging and getting into the thick of the action sees the Primarch rewarded with extra strength, extra attacks, extra initiative, and more. 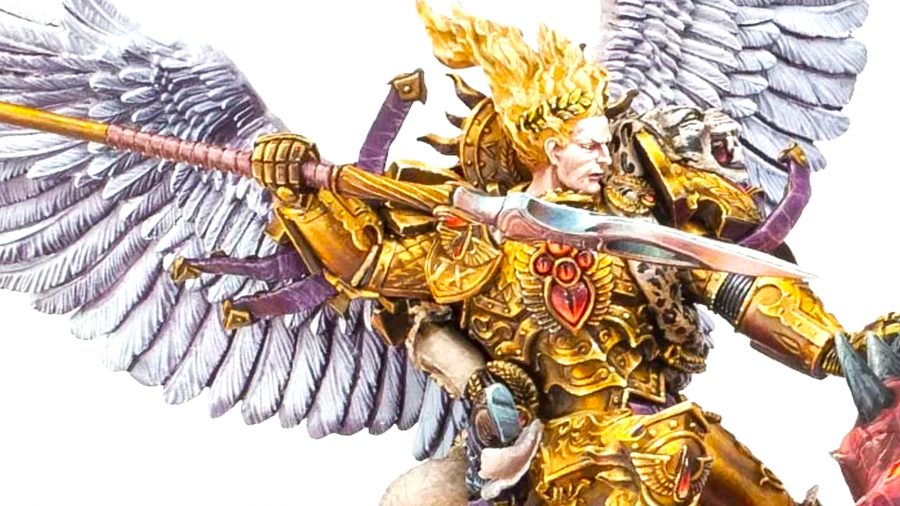 His wargear unlocks a multitude of options. For example, The Moonsilver Blade deals two wounds for every one inflicted when fighting a Daemon, Daemon of the Ruinstorm, of Psyker. Meaning if you’re facing off against anything dealing with the Immaterium, they had better run and hide from your golden god.

Combine that with his 4+ Invulnerable Save, a 2+ Armour Save, Flight, and buffs to other Jump Infantry, it’s clear that if you’re fielding Blood Angels in Warhammer 30k: Horus Heresy, Sanguinius may just be the edge you’re looking for.