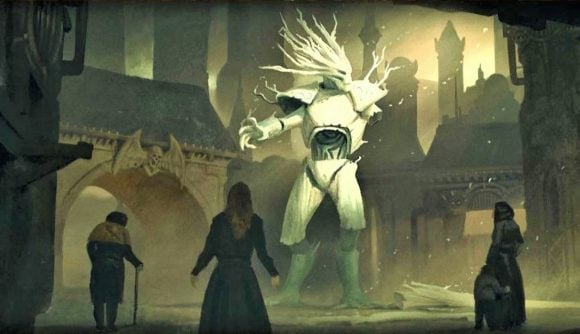 Publisher Cubicle 7 yesterday released Petrified Wood, the next adventure in the Shadows in the Mist series for Soulbound – its licensed Warhammer Age of Sigmar tabletop roleplaying game. Playable either as a standalone story, or continuing from the preceding chapters – Bloodtide, Crucible of Life and Rotten to the Core – Petrified Wood has your characters investigating the murder of one of the Sylvaneth (sentient tree-folk) in the city of Anvilgard. Cubicle 7 confirms you’ll be meeting the Sylvaneth’s mysterious and sorcerous Branchwyches in your detective-work, and drops pretty conclusive hints of Skaven involvement, too.

It’s the fourth of six planned installments in the campaign, which have come out one by one in PDF form, and will eventually be released in a full physical edition. The following chapters – Aqua Nurglis (concerning a mysterious plague), and Balancing the Scales, the campaign’s chaotic conclusion – are set for release later this year, but have no confirmed release dates.

Petrified Wood and the other adventures can be bought separately in PDF form from the publisher’s site, or you can pre-order the Shadows in the Mist sourcebook to get access to all the digital content as it arrives, plus the full printed book when it comes out.

Soulbound is the first full-scale tabletop RPG for Games Workshop’s Age of Sigmar fantasy setting, which came into being in 2015 to replace the then-32-year old Warhammer Fantasy Battles. Its core rulebook released in May 2020, just a month after that of its sci-fi older sibling, Warhammer 40,000: Wrath and Glory (also published by Cubicle 7).

Players take on the role of Soulbound heroes: members of an ancient, and recently reformed order of divinely chosen adventurers, who undergo an agonising magical process to irrevocably bind their souls together, protecting them from the depredations of Nagash (a powerful necromancer and wannabe god of Death). 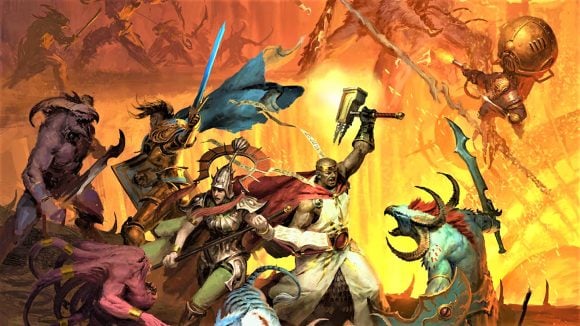 While Shadows in the Mist is the most substantial release for the game so far, Cubicle 7 says it has a lot of new playable content coming out in 2021, including Steam and Steel, a volume which adds rules for various in-game gear and vehicles crafted by the ingenious Duardin (dwarfs) – especially those of Age of Sigmar’s ever-popular steampunk-flying-ship faction, the Kharadron Overlords.

Warhammer 40,000: Wrath and Glory also released its own new adventure, Vow of Silence, on Friday, but you’ll have to pre-order the wider Litanies of the Lost sourcebook to get early access to that one, as it doesn’t appear to be available separately.

Cubicle 7 also publishes the newest edition of the venerable Warhammer Fantasy Roleplay (set in Warhammer Fantasy Battles’ ‘Old World’), and a tabletop RPG adaptation of BBC sci-fi series Doctor Who, both of which also have a stack of new material coming out this year, the firm tells us.

Need a bit more knowledge on the various denizens of the Mortal Realms? Check out our Warhammer Age of Sigmar armies guide.