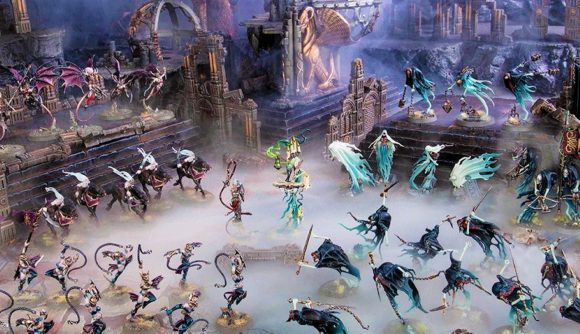 The latest battlebox for Age of Sigmar is up for pre-order this Saturday, on March 28. First revealed in late January, the Arena of Shades battlebox features the bloodthirsty Daughters of Khaine going toe to toe with the bloodless Nighthaunt, and features new models for both these factions. It goes to pre-order on Games Workshop’s online store this weekend.

Shown in GW’s weekly pre-order roundup on Warhammer Community on Sunday, the Arena of Shades battlebox holds 44 models in total. It contains two Age of Sigmar armies; the Core Rules, tokens, and warscroll cards you’ll need to crash them together; and a campaign booklet containing three Battleplans, so players can add a splash of variety to their skirmishes.

The Arena of Shades battlebox marks the first appearance of a couple of new models. Two Hero units are the stars of the show: the High Gladiatrix for Daughters of Khaine and Scriptor Mortis for Nighthaunt. Both cut imposing figures, but also look a little fragile with those spectral tendrils and that long whip – careful with those brushes when painting miniatures! The Nighthaunt gets an additional new unit in the box, with four crossbow-wielding Craventhrone Guard, a rare ranged unit for this army.

This will be your first chance to grab these three kits, though we can assume they’ll be available in other products, or sold separately, at some stage. In January’s Las Vegas Open, for instance, Warhammer Community teased the new models will be found in “a larger release later on”. 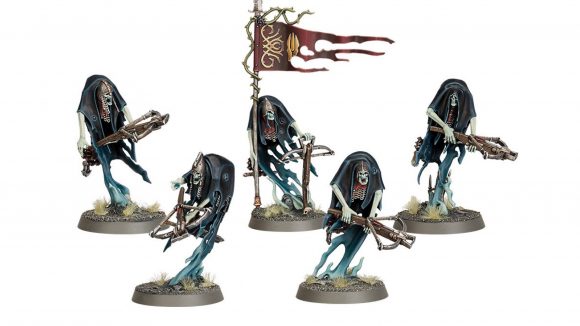 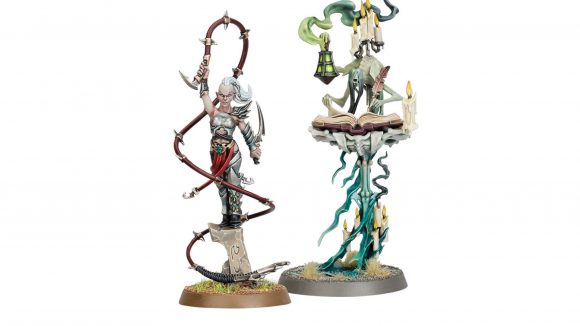 The Nighthaunt models have had rules shown over the preceding weeks leading up to the pre-order. We know, for instance, about the Scriptor Mortis’ ‘Sentenced to Eternal Torment’ ability, which can dish out mortal wounds to heroes. The spectral soulhunter’s crossbows of the Craventhrone Guard, which ignore cover and can hit unseen targets, have also been revealed.

The High Gladiatrix for Daughters of Khaine currently remains a mystery, however. The Warhammer Community article that came with the Arena of Shades battlebox announcement says she likes “claiming the heads of enemy heroes in a dance of death”, so it’s possible she fills the same hero-hunting role as the Scriptor Mortis. We’d be surprised if some concrete rules for this unit aren’t teased this week. 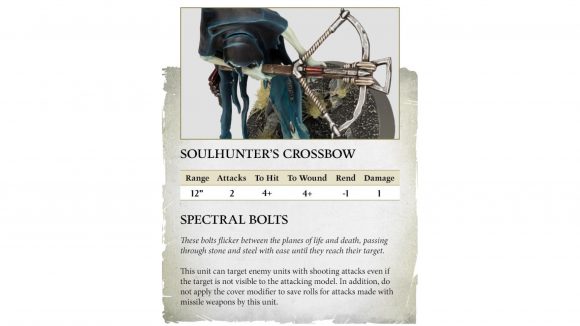 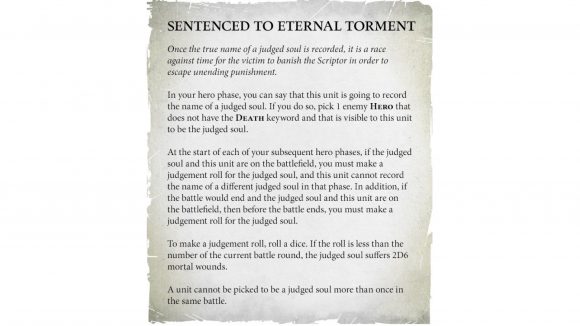 You’ll be able to pre-order the Arena of Shades battlebox on March 28 from GW’s webstore. There’s no word on the price tag currently, but previous battleboxes, including Fury of the Deep which came out on January 22, were priced at $170 / £130.

No clue who these fighting forces are? For info on the Daughters of Khaine, Nighthaunt, and every other Age of Sigmar faction, check out our Age of Sigmar armies guide.