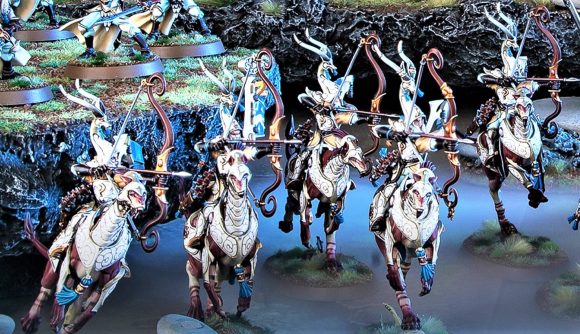 With a new Battletome, and a huge parade of shiny new Lumineth Realm-lords models going up for pre-order on Saturday (to release on April 3), Games Workshop yesterday revealed some tasty rules titbits surrounding some of Age of Sigmar’s strangest new units: the wind-elemental Hurakan cavalry. Acting as fast-moving, flexible foils to the faction’s stolid, hammer-toting Alarith warriors, the Hurakan promise extreme speed, manoeuvrability, and wind-themed magic to aid your elven forces. Also: bizarre, kangaroo-horse mounts called Treerunners which, it transpires, can really move.

A Warhammer Community post yesterday unveiled some of the Hurakan’s key rules – starting with their battle trait, Move Like The Wind. This allows them to pile-in in any direction (not only towards the nearest enemy unit) and, if they just charged, to pile-in an extra 3” and fly while doing so – passing over all other models effortlessly.

The trait gives them a bunch of options moving into, and out of, combat. Are you within charge range of the enemy front line, but really want to get at the squishy characters hiding beyond? Just bounce over ‘em! Been charged by some nasty-looking enemies? Better boing yourself 3” back out of danger! These nippy folks are going to cause your melee-focused opponents some serious headaches.

We also saw one of the Hurakan’s gusty elemental spells, Calming Zephyr, which lets you pick a unit within 18” of the caster, heal them for D3 wounds and make them immune to battleshock until your next Hero Phase – not a bad little supportive sticking plaster for one of your frontline units that’s just taken a beating.

Make a Hurakan character your army’s general and they’ll get the Grand Windrider ability – a vast 24” aura that grants a zippy 16” flying move to all Windchargers units (the Hurakan’s trademark cavalry archers) starting a move wholly within its bounds. Expect to see ‘Death Star’ formations of Windchargers clustered around a general, ready to soar, as one, like some terrifying marsupial meteorite, directly into the fray early doors. 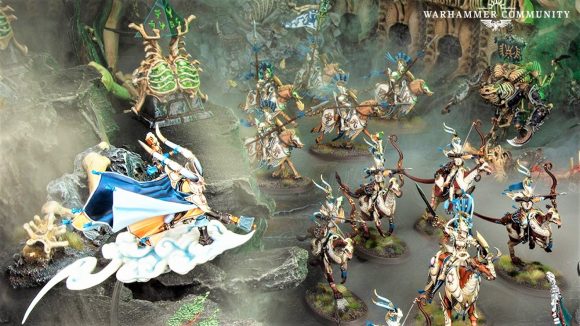 Finally, the post revealed a Hurakan artefact, the Windblast Fan, that gives a once-per-game ability to force an enemy unit within 3” to make a normal move in retreat.

Very much in line with the Hurakan’s battle trait, this seems designed to frustrate fighty enemy armies who think they’ve finally made it into combat, and are now ready to turn your elves into pate. With a simple flick of your definitely-not-orientalist battle fan, you can huff, puff and blow them away. Use it against fast-moving cavalry for longer retreats, and additional amusement.

GW has so far announced three Hurakan units – the spectacular centrepiece Spirit of the Wind, the cloud-riding Windmage character, and the Windcharger cavalry. All three will become available to pre-order this Saturday – alongside the new Battletome, and eight other new Lumineth kits, including Lyrior Uthralle, Warden of Ymetrica, and the worryingly vertiginous, yet unspeakably gorgeous Vanari Bannerblade, pictured below. 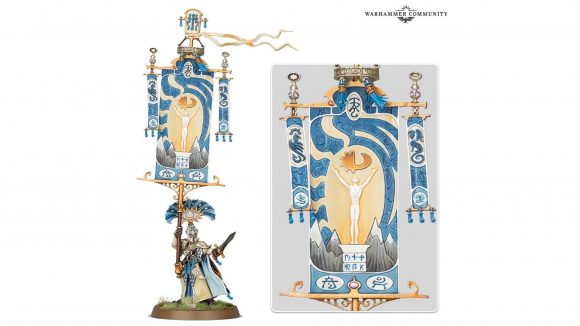 The Lumineth Realm-lords are one of the more recent factions to launch for Warhammer Age of Sigmar, and act as spiritual (and literal) successors to the High Elves armies of the game’s tabletop predecessor, Warhammer Fantasy Battles.

To learn more about the Lumineth, and the rest of the Mortal Realms’ diverse panoply of fantastical armies, do check out our Age of Sigmar armies guide. Or, in case you haven’t heard, there’s a spooky new army coming to join the game soon – check out the Soulblight Gravelords info here.