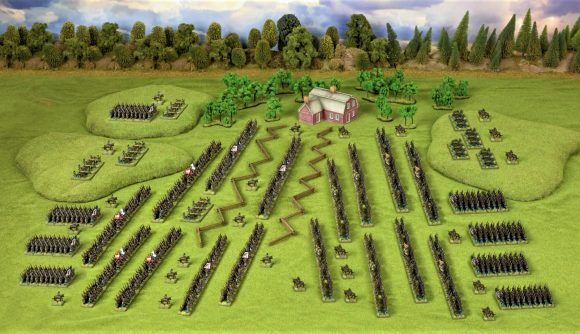 Historical miniatures giant Warlord Games released its long-awaited American Civil War starter set for Black Powder at the weekend, and, well, it’s unreasonably, newsworthily gigantic. The set contains 24 entire 15mm-scale regiments (12 Union and 12 Confederate), plus 12 cannon and 12 mounted commanders for each side. There’s also a smattering of MDF terrain (one barn and two rows of snake fences) along with an A5 rulebook, a 32-page history and scenarios booklet, a sheet of flags (no, not that one), and a handful of D6 dice to start playing with. This chunky battle in a box will cost you £100 (around $140) from Warlord’s online store.

The Epic Battles: American Civil War setting runs on an adapted version of Warlord’s Black Powder game system, which covers the horse-and-musket era of warfare between 1700 and 1900, including specific rulesets for the Napoleonic Wars, Anglo-Zulu War and other conflicts.

Previous Black Powder content has been designed for 28mm-scale miniatures (the same scale as Games Workshop’s Warhammer 40K and Age of Sigmar ranges) but this boxed set is the flagship of Warlord’s new Epic Battles range, using stands of 15mm models instead, to represent larger forces and recreate more sweeping engagements.

Along with the gargantuan new starter set, Warlord also put up a bevy of smaller American Civil War kits for pre-order, including a ten-stand box of Skirmishers, a Dismounted Cavalry Brigade box with nine stands of infantry and three of horseholders, separate kits for cannon, in both limbered and wagon form, and various other extras. 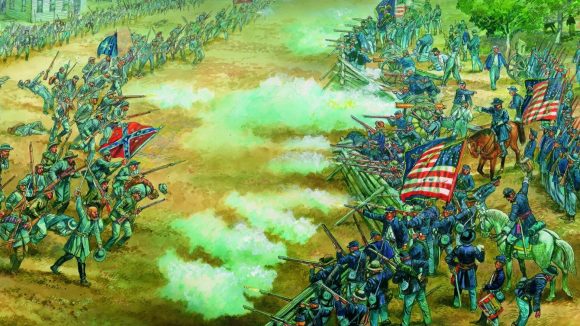 “The game itself isn’t designed as some radical re-imaging of Black Powder, but our first steps into looking at a new scale of things for larger battle,” Sennewald says.

“We started to notice that people were indeed picking up dozens and dozens, and dozens, of certain troop types (as you’d need to, to recreate certain conflicts!)”.

“But what I feel makes the epic scale shine is that getting ahold of 10 boxes of cavalry, for example, (and enough space to play with them on!) can be quite prohibitive to some players”.

He added: “I’ve been thoroughly impressed with the detail we’ve been able to capture on the epic scale miniatures, whilst also compacting what should require an entire double garage-sized games-cave into something that will fit on your standard table”.

As for Black Powder’s next instalment, Sennewald says Warlord Games will continue to support the game’s launch into the American Civil War with new troop types, including horse-drawn limbers, dismounted units, skirmishers, and more. But he hints that even more units and sculpts might also be on the way.

One of the biggest miniatures companies in the world, UK-based Warlord Games makes a bunch of different historical tabletop games, including ever-popular 28mm WWII squad-level wargame Bolt Action, and the recently-launched Victory at Sea naval game – whose plush new rulebook we reviewed this month.

Got a hankering to learn more about historical miniatures? You can get a flavour for how they work with our guide to the best free wargame rules online, or delve into the history of different miniatures scales with our resident expert, Colonel Bill.

Or, if you’re already a miniature wargamer and want to rid your shelves of bare grey plastic – try our guide to painting miniatures.