Getting started in any miniatures wargame is a challenge. Behind all the pretty plastic troops and exciting new units lies the far less glamorous challenge of model collection. Whether you have several armies of Space Marines sitting in a glass display case, or have never held a sprue before, starting a new collection of miniatures will put you in the same boat everytime: slowly assembling a large enough force to do battle on the epic scale you envision.

Usually, that amounts to a slow grind of accumulation. You’re left fielding half-sized armies of barebones squads, while you wait to purchase enough units to fill out your ranks. Add to that the sheer cost of buying mini upon mini to add to your fledgling force, and you’ve struck upon a combination of such expensive iteration that less enthusiastic players will be easily deterred.

Opening its lid, you’re greeted with a formidable stack of sprues that build into a whopping 2,400 troops across 24 infantry regiments, 24 cannon crews, and 24 mounted commanders, split equally across the Union and Confederate armies. Under that, you’ll find the second edition Black Powder core rulebook, an American Civil War background and scenario booklet, flatpack terrain pieces, and a handful of flags. 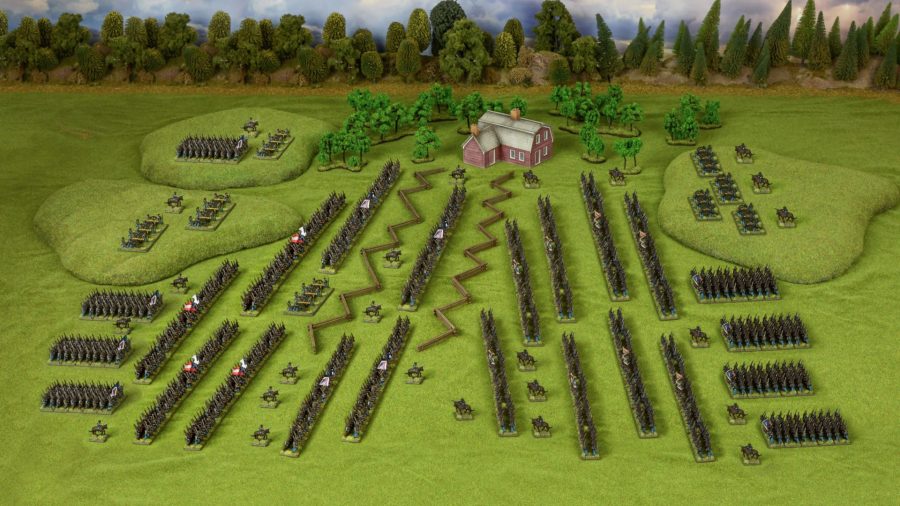 All of that combines into a truly massive box. The reduced mini size does well to create the feeling of commanding vast garrisons, but really it’s the sheer volume of plastic that lends this starter set its sense of enormity. By the time you’re done assembling every regiment, you’ll have an army that’s sure to outnumber all of your other miniature forces. Except you won’t just have that army; you’ll have two.

As starter sets go, it’s a generous one. Rather than offering a beginner force in need of supplementing, the box lets you play massive table-spanning battles right out the gate. The included Black Powder rulebook, too, is the real deal, rather than a shortened version of a larger hardback copy.

The push-fit miniatures are simple to build, requiring only a couple of snips of your sprue cutters to get them onto their bases. Besides fitting wheels onto the cannons, there’s no assembly required with these models, letting you whip up an entire, unpainted army in practically no time at all. Everything is set up for you to quickly dive headfirst into the game. 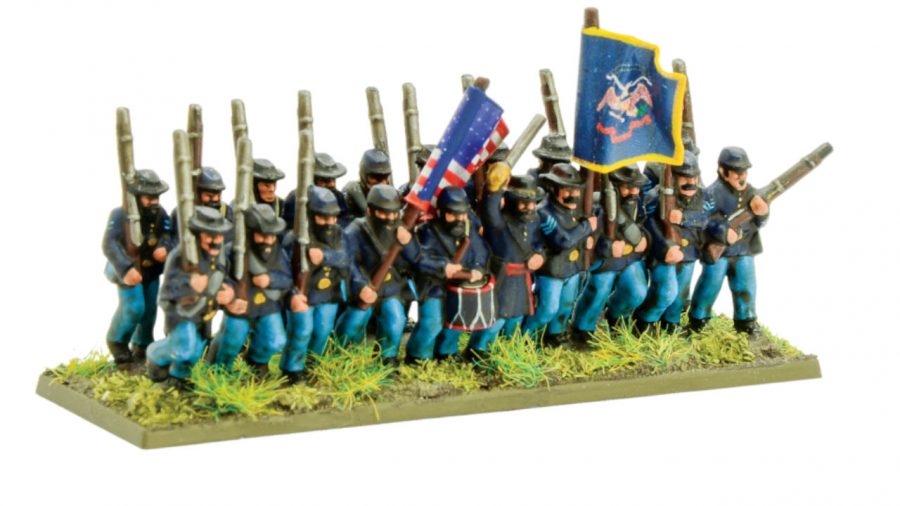 Of course, with this epic scale does come the cost of detail. Most regiments are identical to one another, and both armies share the same unit roster. Some players might be reasonably disappointed by this lack of variety. At a time when miniature games have never looked so good, the thought of two, identical armies facing off against each other can seem rather dry; the character of the conflict and distinct personalities of each unit lost among their tiny faces.

But there’s enough care in each sculpt to keep them interesting. The occasional drummer among the ranks of infantry, or the knives and containers swinging from the belts of each rifleman, adds variety. Plus, a certain degree of flatness should be expected. No one picking up a wargame set in the American Civil War could reasonably expect masses of colour and variation. It’s a trade-off, and a valid one, for the game’s scale. 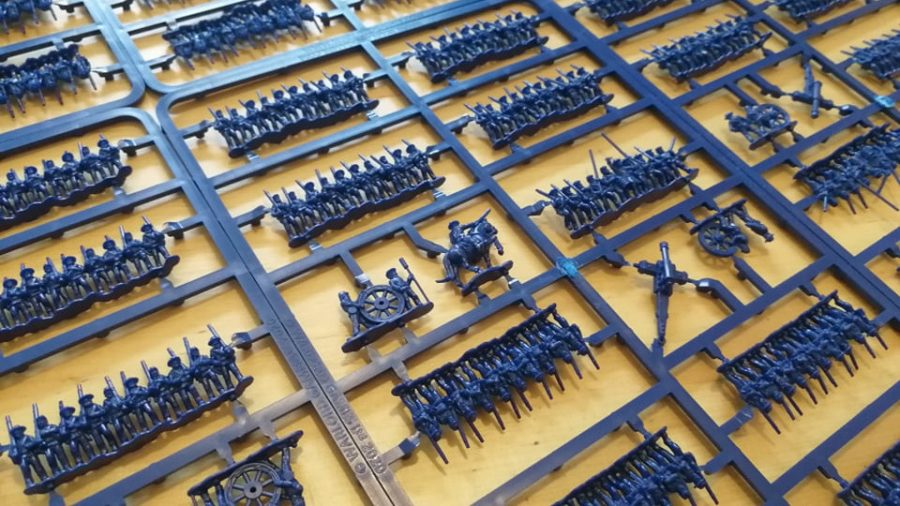 The boxed set certainly isn’t lacking charm. The included MDF terrain glues together into a nifty, surprisingly weighty, little barn that will look a treat when painted, as well as several interlocking ‘snake fences’ that serve as useful boundaries.

There’s enough care in each sculpt to keep them interesting

Neither will make a dramatic difference to your existing terrain stock, but for those players just starting out, or have no terrain to suit the game’s small scale, they’ll be particularly useful. Starting your first skirmish is all the more fun when you have something to be skirmishing over, rather than fighting on a blank dining table.

In other areas, however, the set’s ability to cater to new players is a little undercooked. Outside of the core rulebook and an adjoining booklet, which lists various historical scenarios to play across in ascending complexity, there’s no introductory rules sheet or beginner material. A practice match, using the units of this specific box, would have done well to ease new players into the game, and introduce them to its basic operation. 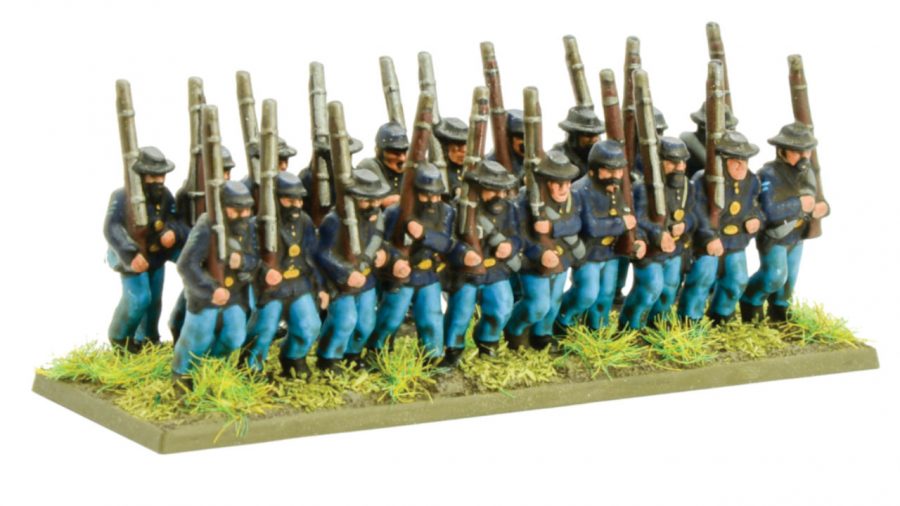 Similarly, I wonder if new players will struggle to paint the miniatures. Manoeuvring your brush at this scale is tricky, and painting the thick moustachioed faces of the small soldiers can easily end in disaster. The box is well equipped to supply everything an existing wargamer will need to fight massive battles in the American Civil War, but totally new players might be more overwhelmed than enchanted with this beast.

Pick your pot: These are the best paints for miniatures

The box is first and foremost for those who love the American Civil War. Its booklet speaks to the writer’s fascination with the era, while the historical scenarios and setting-specific rule adjustments will let players indulge their inner historian. 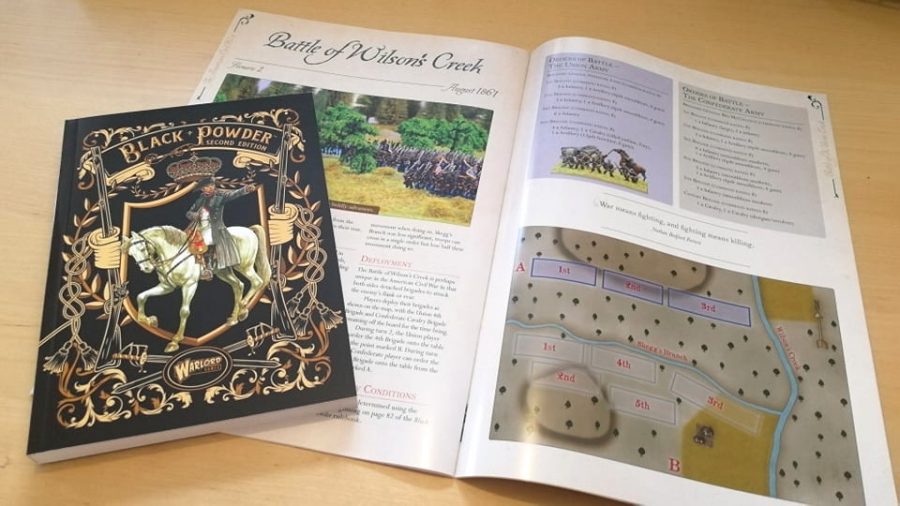 But it’s difficult to read some passages of the booklet that celebrate the military pursuits of the war’s generals while ignoring their repugnant political and social beliefs. More acknowledgement of the racism that was inseparable from the war and its armies would not only be enlightening but place the game in a powerful historical context, and avoid any undue commemoration of these ugly figures of history.

If you’re looking to recreate the vast battles of the American Civil War, you could do little better than this starter set. Its small scale and huge quantity of miniatures do well to reproduce the enormity of the conflict, while the included rulebook and terrain let you dive in with ease. Those totally new to the world of miniatures might struggle with the initial hurdle of rule-learning and painting, but get over that, and you’ll be well away.