Tabletop wargame starter sets are peculiar beasts. Handing players a force of miniatures that can swiftly introduce them to the basics of gameplay, while also providing enough meat to show off the nuances of its systems, they occupy a space somewhere between frustratingly simplifying and annoyingly bewildering. Walking the line between those two is a tall order, but one which Bolt Action Island Assault! – the newest starter set for Warlord Games’ WW2 miniature wargame – largely fulfils. If you belong to its target audience, that is.

Island Assault! follows a template typical of miniature wargame starter sets. Under its lid, you’ll find a healthy collection of plastic sprues that build into two basic forces: 24 infantry miniatures and a Chi-Ha tank for the Imperial Japanese Army, and 24 US Marines, with their M3 half-track, as the opposing force. It’s a balanced batch, and comparable to the Band of Brothers starter set that’s long been Bolt Action’s most popular entry point – albeit with an extra vehicle, and a slightly inflated price tag at $116 / £84.

It does well to equip you with everything you’ll need to start playing. The Bolt Action Second Edition rulebook is included, alongside the game’s specific dice, template sprues, pin markers, a pillbox, and two Japanese ‘spiderhole’ bunker terrain pieces, as well as a beginner instruction booklet that’ll walk you through your first game.

Nothing is skimped on, and it’s difficult to imagine what other gameplay essentials could be reasonably included. There’s plenty of minis to build, and, while the sprues are recycled from past Bolt Action set releases, they fit well within a starter set designed to introduce players to the game, while offering opportunities for future expansion. Plus, there’s no hiding its value for money. Packing an amount of plastic that would usually cost close to $165 / £120, this box clearly passes the cost-saving sniff test. 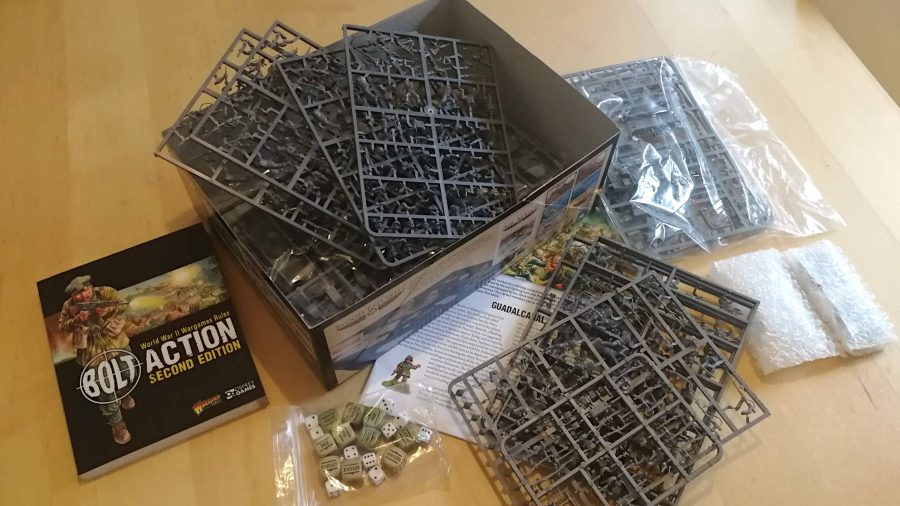 And with that, you get a varied bunch of minis. While the basic infantry squads are composed primarily of riflemen, there’s enough optional weaponry to vary both the looks of your men, and the dynamics of your games. Add to that the two included vehicles, and you can run some pretty exciting matches of Bolt Action straight out of the box. Although you’ll be wanting to acquire some more expansions for a standard size game, the minis in this kit won’t leave you bored.

Nothing is skimped on. It’s difficult to imagine what other essentials could be included

But actually assembling the blighters will be a finicky process for new players taking their first steps into the plasticky world of miniature wargaming. Despite the reams of building options at your disposal, the set comes with virtually no assembly instructions. The ‘Assembling your forces’ page in the included booklet amounts to little more than a few images of fully built, painted minis, and the slightly reductive instruction to copy the pictures. No step by step guide; no demo run; and practically no explanation of where to begin.

I can imagine a total novice will quickly find themselves lost. Although the included reference sheets label each sprue’s components – so you can identify the weapon types and accessories at a glance – there’s nothing to say what you can actually build with them. A new player might be left wondering if it makes a difference equipping their Marines with the M3 ‘Grease Gun’ SMG rather than the Thompson, or which of the many components they need to build a light mortar squad for the Japanese army. In any case, they’ll get no help from the included booklet. 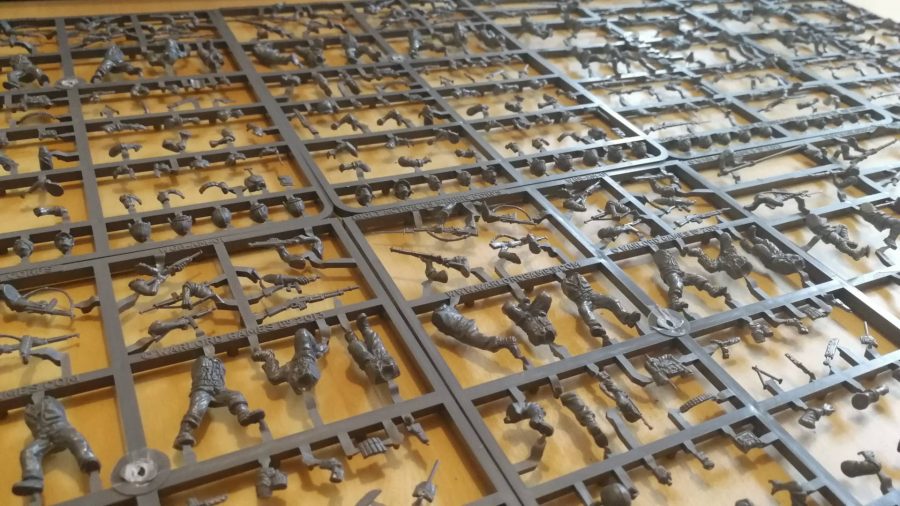 That lack of guidance aside, there’s heaps of variety on offer, with each multipose miniature allowing for pretty wild customisation. You can deck out your squads with an array of weaponry – from standard rifles, to knee mortars, to suicidal lunge mines – before adding an assortment of bags, packs, and decorative accessories to them. Each can be glued into various poses, from gallant charges to hidden prone positions, which makes the building process that much more enjoyable.

However, this potential for customisation is made bittersweet by the absence of fuller, clearer assembly guidance to make the most of it all. The box’s recommended squad builds are basic, composed primarily of riflemen with a couple of machine guns spotted here and there. They’ll do the job, but many players (new and old) will be disappointed upon seeing an array of unused weaponry. 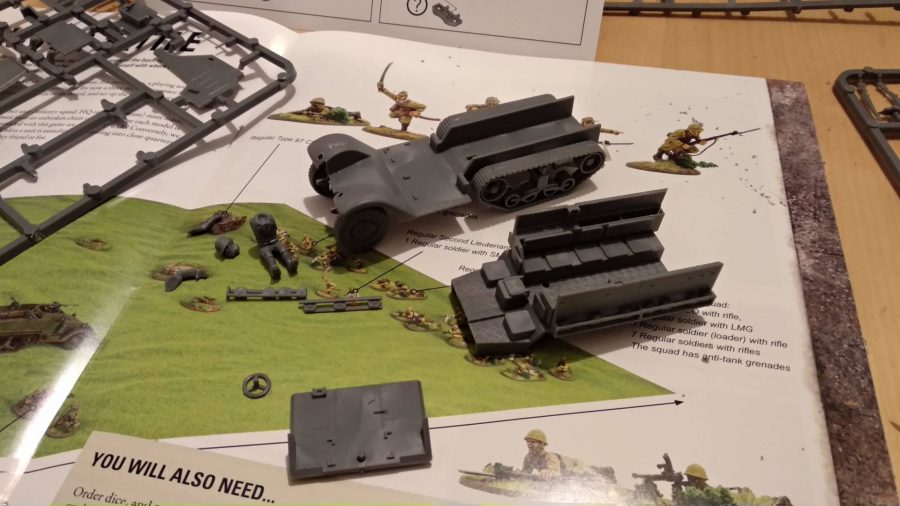 Odder, still, is the way the set highlights the customisation options without explaining how to actually use them in a squad. It makes clear that you could build a light mortar squad, or turn a banner pole into a lunge mine – but leaves you to go digging into the core rulebook to find out how to actually integrate these into a gameplay-legal unit. You might happily construct an infantry squad with two SMGs, only to later release that one of those should have been a light machine gun, and you missed the opportunity to equip your men with anti-tank guns. A little disheartening for anyone.

A total novice will quickly find themselves lost

That’s not to say the box is totally unfriendly to new players. The latter half of its booklet walks you through a mock-up game of Bolt Action, clearly and succinctly teaching you how to play through several informative steps. All the fundamentals are covered – including set-up, order of play, and turn actions – with any potential rule misunderstandings quickly cleared up. The tutorial assumes no prior knowledge, and is one of the most comprehensive, swift walkthroughs of a miniature wargame I’ve read.

The booklet also includes a page on painting the models, listing the Vallejo and Army Painter colours used for each component of the Japanese and US infantry. It provides some alternative colours, too, if you’d prefer to recreate another historical period. But, again, it isn’t a walkthrough. Don’t go expecting a beginner-level guide to painting miniatures; this is firmly a shopping list, rather than a tutorial. 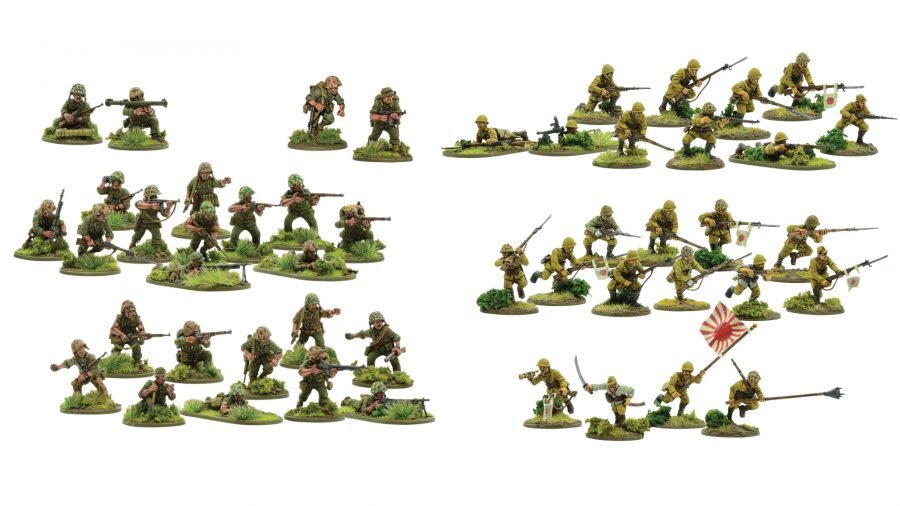 The Bolt Action Island Assault! starter set is a fantastic bit of kit for the right audience. If you have experience playing other miniature wargames and building multipose miniatures, possibly from the earlier years of Warhammer 40k, you’ll likely find this set a joy to dig into. It doesn’t do its best to ease you into squad-building, but once you /have/ whipped up your forces, you’ll be playing Bolt Action in no time.

If you’re brand new tabletop wargaming and fancy this kit as your gateway into the hobby, however, you might find yourself in for a surprise. Get ready to spend more time figuring out how to build the minis than actually doing the glueing.