Historical miniatures designer Warlord Games has announced a new ‘Starter Army’ box for its 28mm-scale World War II miniature wargame, Bolt Action. The British and Canadian Army Infantry (1943 – 45) box includes 30 plastic miniatures aimed at players looking to start a new Allied force, and comes packaged with a host of customisation options, the firm said in a blog post yesterday. It will be available to pre-order directly from Warlord Games from February 6.

Based on the arms and equipment of British infantry forces between 1943 and 1945 – and their Canadian counterparts, who closely matched their gear and general operations – the starter box includes bits to allow a range of variations for each miniature. Warlord Games boasts that 396 variations of the miniatures can be made, even before optional heads and additional minor accessories, such as binoculars and maps, are considered.

The starter box’s options also incude a range of weaponry to pick for your troops, including famous firearms like the Lee Enfield .303 rifle, the Bren light machine gun, and Webley service revolver, with light mortars to boot. Other accessories include a choice between different helmets and Tom O’shanter hats, specifically for the Scottish troops in the section.

Warlord Games say the forces provided are aimed at accurately reproducing the late WWII British and Canadian infantry section (that’s British for a ~7-man squad) – which centred on the hefty firepower of the Bren gun, supported by longer-range mortar bombardment, and effective direct fire from rifles and cheap Sten sub-machine guns. 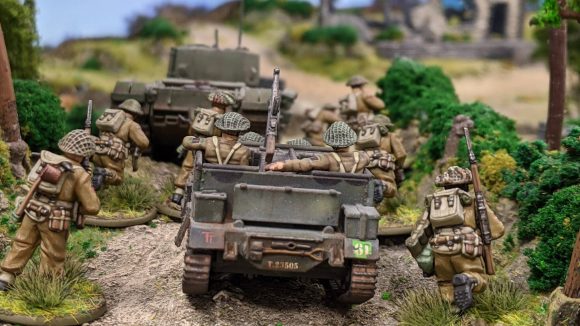 If you’re eager to join the fray of battle in a tabletop wargame (but don’t fancy painting all the soldiers right now), read our guide to the best war board games.