No matter how many hours you sink into Crusader Kings 3, you will never truly master its expansive roleplay-fuelled grand strategy. Not because its systems are too complex or its mechanical possibilities too wide, but because the sheer volume of CK3 mods is so large, you’ll be constantly drowning in new ways to extend, or implode, your burgeoning realm.

Boasting a buzzing mod scene since its launch in 2020, Crusader Kings 3 is ripe for serious, and silly, alterations. Thousands of CK3 mods are available to download on Steam Workshop, and while many are still mid-development, they offer an easy way to spruce up your medieval statecraft with new challenges, quirky mechanics, or total conversions.

But be warned, modding Crusader Kings 3 is a subtle addiction. One moment you’ll be taking your strategising to Middle Earth and waging the War of the Ring, and the next, you’ll have downloaded some dastardly cosmetic mod that turns your player character into a hideous mutant, and makes them a laughing stock of their court. There is no end to this game’s modding, only more avenues of splendid CK3 mods to explore.

So prepare for some crazy conversions, as we examine…

These are the best CK3 mods: 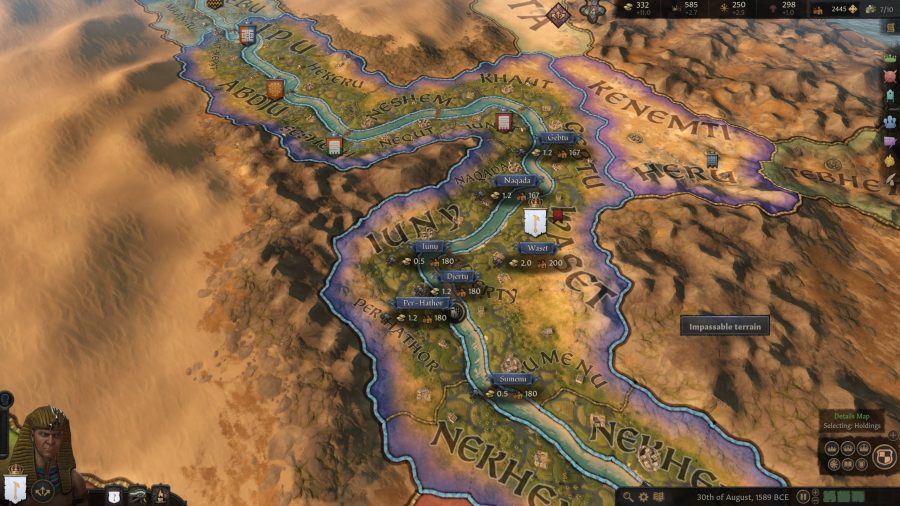 The best mods for Crusader Kings 3 might well be those that obscure the base game, capturing its core systems of political intrigue and dastardly scheming, but with a new and distinct thematic sheen. And few do it better than The Bronze Age: Maryannu. A total conversion mod that carts Crusader Kings 3 back a couple of millennia, and shifts focus to the Aegean sea and Near East, you’ll be dealing with the ancient Sumerians, Akkadians, Hittites, and Assyrians as you grapple for dominance of your pre-iron vestiges.

Buildings have been overhauled to coincide with the era, and war chariots tumble into battle at your command. But it’s not only aesthetics that get a look in. Additional era-specific cultural traits and innovations are included, alongside new religious tenets, such as pharaohs, oracles, and mythological traditions.

Although a joy to play at the moment, the mod isn’t complete, and its creators promise more content will be added in the future. Expect a new tributary system, more innovations and tenets, and new clothing and armour added to character portraits. There’s also a novel ‘Distance Efficiency’ mechanic, which lowers levy and tax output the further a territory lies from your capital. Galavanting in the Bronze Age has never been so fun. 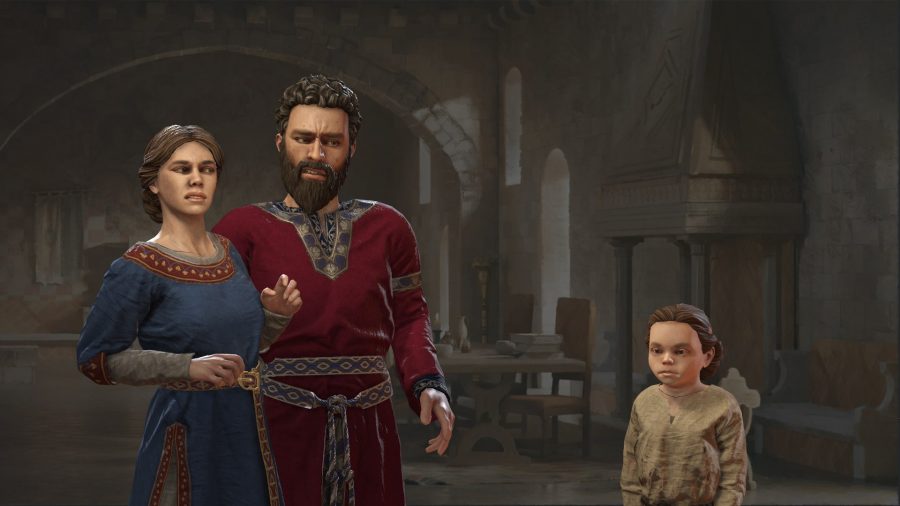 Providing no new mechanical additions, Fullscreen Barbershop centres instead on that most important aspect of Crusader Kings 3 – the single greatest determinant of your rulers’ fate:their looks. Crusader Kings 3 already includes a robust ruler designer, allowing you to form your character into a bronze adonis that makes even the Gods envious (or a hideous freak better kept in the palace dungeon), but Fullscreen Barbershop goes a step further by letting you show them off for all the world to see with additional screenshot functionality.

Rotate your character, choose a background, pick a pose, zoom in, and become the Steve McCurry of medieval photoshoots. Also included is the Barbershop for Everyone mod, so you can spruce up your heir and spouse, adding them to the photoshoot, too. A silly mod? Yes. But also great fun, and essential to capturing the full personality of all your strange family happenings. 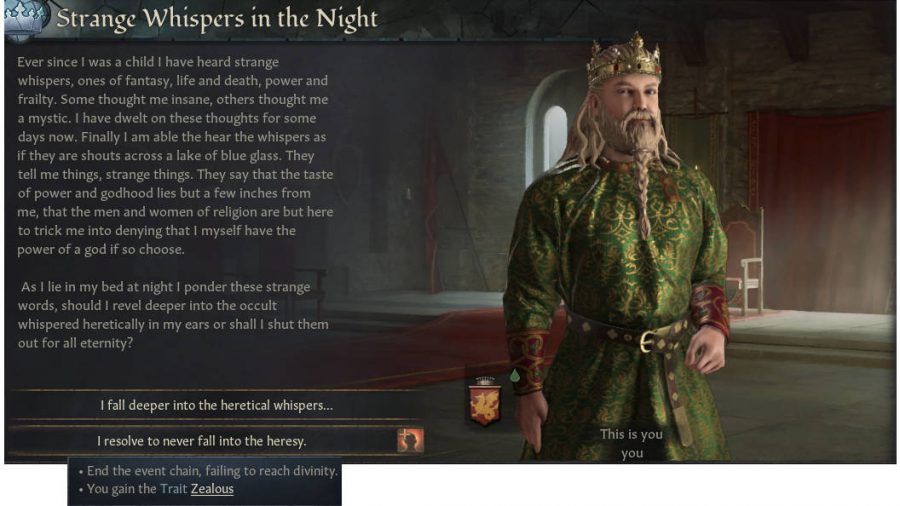 Pantheon of the Gods 3.0 – Rise of the Celestials

If religious fervour and sprawling celestial mythology are your idea of a good time in Crusader Kings 3, then Pantheon of the Gods might just be for you. Alongside a glut of original content – from questlines, to traits, to religions and cultures – it transforms Crusader Kings 3’s devout, but decidedly non-supernatural, conception of the world into a magical land of gods and fantastical races.

Become a god, and create a religion around your character

Its focus lies on deities. Various religions and gods are added to the game, alongside additional races and creatures, each bound by their own mythology. But the celestial beings of this world aren’t ones to sit idly in the sky while the earth below plods along in slow submission. Your character can follow an event chain to become a god themselves, accruing specific deity traits, creating a religion around themselves, passing on divine powers to others, or cursing those that defy you. And, naturally, you have the option to train an army of angels or demons to fight by your side, as every good deity would.

Still a work-in-progress, there’s a lot of scope to Pantheon of the Gods, and the mod’s creators promise some big updates in the future. New traits, lifestyles, and even a magic system are reportedly in the pipeline. Expect to see more story-based gameplay and narrative features on the way, too. 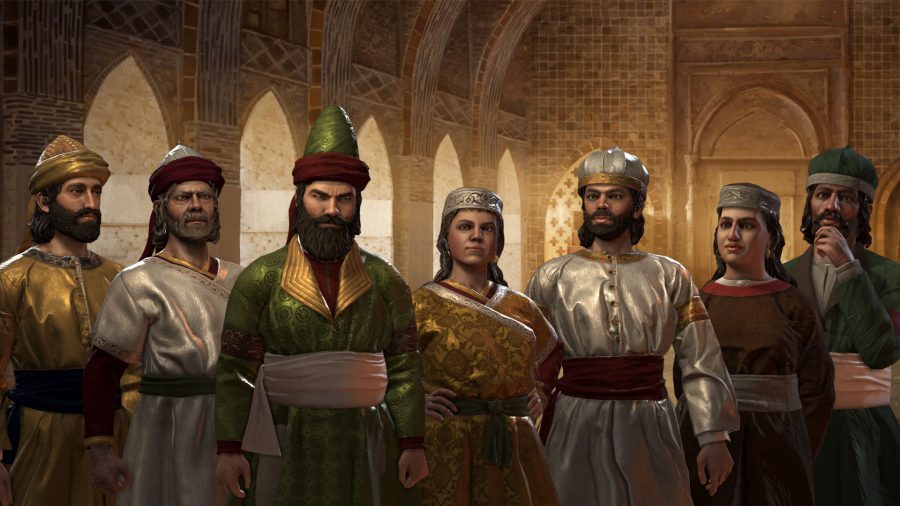 You might have constructed a mighty realm that’s the envy of all neighbouring lords, but have you done it in style? Community Flavor Pack adds heaps of portrait accessories, so you can deck out your character with a little visual pizzazz. Many are designed to improve the immersion across cultures and lifestyles that didn’t get a thorough exploration in the base game.

Future alterations: These are the best Hearts of Iron 4 mods

Intended to be historically accurate as well as chic, you’ll find an array of crowns, hats, helmets, armour, shields, and beards inside for your aesthetic needs. As they say, dress for the job you want, so stick on that Turkic battle mask and get ready for some land-grabbing. 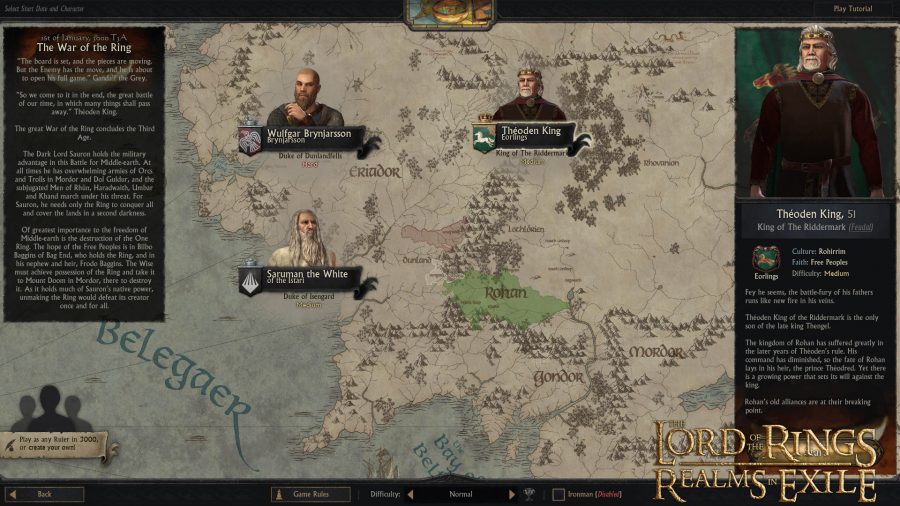 An expansive medieval grand-strategy game of war, intrigue, and custom character design – of course there’s a Lord of the Rings mod for Crusader Kings 3. The premise is simple enough: take the vanilla game’s core gameplay and plonk it into the realm of Middle-earth, complete with a lovingly-designed map, character portraits of your favourite characters, and all the conflict of the War of the Ring.

Play as Théoden of Rohan, Saruman of Isengard, or Wulfgar Brynjarsson

So far, the mod extends only to the Kingdom of Rohan’s struggle against the dark forces of Saruman, the Wildmen of Dunland, and the Leofring bandits in the late Third Age. Play as Théoden of Rohan, Saruman of Isengard, or Wulfgar Brynjarsson of Dunland, with each faction bringing distinct traits and opportunities. As Rohan, you might construct Helm’s Deep and relive the glory of fending off row upon row of Uruk-hai pikemen. Or, as Saruman, you have the choice to dismiss the enticing power of the Dark Lord, or embrace Sauron’s call and use the all-seeing palantír.

The team behind Realms in Exile plan to extend the mod to the other realms of Middle Earth, but even in its current, limited state, it provides a loving recreation of Tolkien’s world and a bevy of well-placed additions. 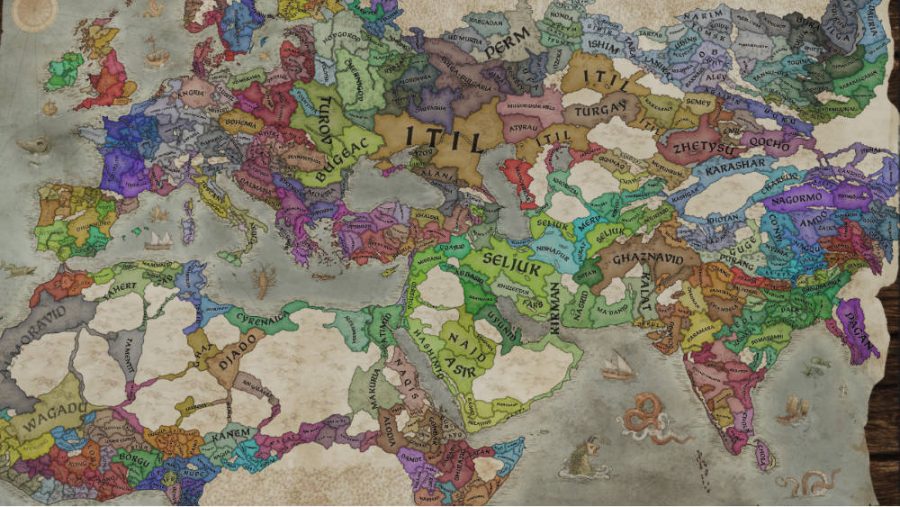 Based on the hugely popular mod of the same name for Crusader Kings 2 (that was later integrated as an official game mode), Shattered World dispenses with the big and ushers in the small. Allowing you to delete territories of certain sizes and break them into smaller counterparts, the mod has you shatter the world into smaller, more digestible pieces.

Ignorance is bliss: Why Hearts of Iron 4 is best for rookies

Sick of seeing Empires consume the world’s surface? Break them into multiple kingdoms, distributing their land to competing lords. If that is still too large for your liking, shatter the world into smaller duchies, or even individual counties. Not only does it level the playing field for those smaller nations that couldn’t hope to compete against Imperial might, it also throws everything up in the air, disrupting the balance of power to allow a new order (hopefully yours) to fill the power vacuum. 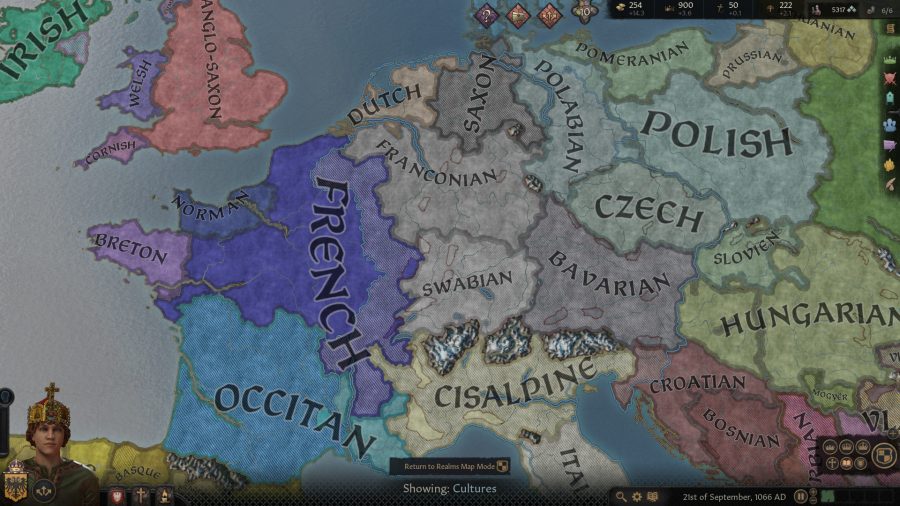 So you’ve created a mighty realm, withstood the highs and lows of medieval ruling, and made it all the way to 1453, the game’s final year. A time for celebration, of course, and reflection on the generations gone by. But a time to stop and restart your affairs of state in another game of medieval machinations? No chance. This CK3 to EU4 Converter mod lets you continue your Crusader Kings 3 campaign in Europa Universalis 4, seeing your empire through the Late Middle Ages and into early modern history.

Running the conversion can be a little finicky, especially if you’re playing with additional mods, and can falter in places. But when everything goes smoothly, it offers a fab way to keep your much-prized empire intact post-game, and a renewed momentum to dive headfirst into yet more grand-strategy, as you learn to apply the systems of another Paradox title to your hard-won kingdom.

Technically, the mod listed on Steam Workshop is actually the method of delivering and running it in-game. The mod itself is actually found on the creators’ thread at Paradox Interactive’s official forum. And, if you really love the idea of continuity, try converting your Europa Universalis 4 endstate to Victoria 2, and then into Hearts of Iron 4, letting you oversee your realm across 1000 years. 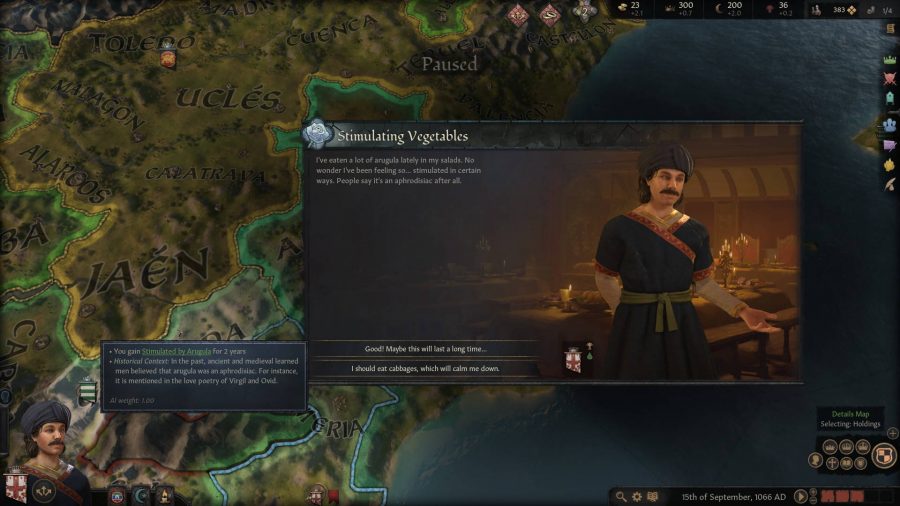 At its heart, Crusader Kings 3 is as much a roleplaying game as it is a complex grand strategy title, challenging you to direct your ruler through the tumultuous reckonings of court and politics. But what about the moments of less grandiose fare, when it isn’t the fate of the realm, but the affectations of your character that are at stake? The VIET (or Very Immersive Events and Tales) mod aims to cater to just those, adding a collection of everyday events to spice up your statecraft.

Invasion 101: Check out our Hearts of Iron 4 tutorial

You might find yourself in small talk with a courtier, and choose how to approach the situation, choosing what local food takes your fancy, or spinning a grand narrative of philosophical inquiry to a passing listener. How will you respond when a seer presents a troubling prophecy about your future? The decisions you make and actions you take in the genteel garden of your court, or the placid surroundings of your capital, can be just as exciting, and certainly as personally fulfilling, as any of the politicking you’ll be doing in the throne room. Just make sure you curtsey right.