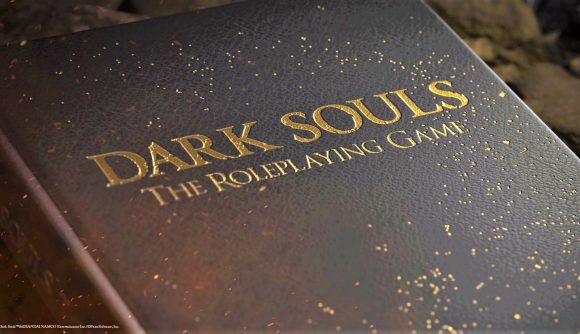 Tabletop gaming publisher Steamforged Games has announced it’s going to release a limited-print ‘Collector’s Edition’ of the upcoming Dark Souls Roleplaying Game. Revealed by Steamforged in a new trailer (which you can see below), the Collector’s Edition packages the 500-page rulebook in “an exclusive leather-look cover with embossed gold foil and gilt-edged pages” that are designed to imitate the restoring warmth of a Dark Souls bonfire.

Steamforged also confirmed the TTRPG will have its own set of roleplaying miniatures for player characters, enemies and bosses. It’s unclear exactly when the miniatures sets will go up for sale, or how much they will cost, but the latest Steamforged press release said to expect them “later this year”.

If you miss the limited print run – or simply don’t feel the need to shell out for that much gold – the original rulebook contains all the same content. Plus, it can officially be pre-ordered from today. Both versions will be available for sale in March 2022 for U.K. and EU fans, but you’ll have to wait until May to get hold of a copy if you’re in the United States.

Alongside pure tabletop releases like miniatures skirmisher Godtear and family-friendly TTRPG Animal Adventures, Steamforged Games is known as a leading publisher when it comes to licensed games. The licensed games available in tabletop form from Steamforged include:

Steamforged’s Creative Director and Chief Creative Officer, Mat Hart, shared his excitement for the Dark Souls RPG in the publisher’s latest press release, saying both rulebooks are “gorgeously illustrated, hardback books designed to deliver as much in looks as they do in content.” “Collectors of either edition will not be disappointed,” he added.

Want more Dark Souls RPG updates? Read on to find out exactly why the Dark Souls RPG uses D&D 5e rules. Dark Souls 3 fans should also get excited, as the upcoming TTRPG promises to include “nearly every individual weapon, shield, and armour set” from the third Souls game.