D&D 5E might be the most accessible version of Dungeons and Dragons for ages, but D&D’s vast fantasy universes and unique nerdy pedigree can still feel forbidding to would-be roleplayers. For some, the world’s favourite roleplaying game simply takes itself too seriously, with its highfalutin,  Tolkienesque characters. It needs more chill. It needs more relatable heroes. It needs puppers and cattos. If you’re currently nodding furiously at your screen, well, our Animal Adventures review will likely set your whiskers twitching.

Animal Adventures is a (very) successfully crowdfunded series of canine and feline miniatures, adapted rules, and accessories from Steamforged Games, which port the open source 5E ‘OGL’ ruleset into a world of anthropomorphised cats and dogs.

First seen in the initial 2019 Kickstarter campaigns for the ‘Dungeons & Doggies’ and ‘Cats & Catacombs’ miniatures series, Animal Adventures has since released a full expansion titled Secrets of Gullet Cove (including a 240-page sourcebook and new minis), and has another, The Faraway Sea, coming out in late 2022. In short, these furry, fantasy friends are going places.

And, since Steamforged has very kindly provided us with a starter set to play with, we can furnish you with an introductory Animal Adventures review, to help out anyone pawing at their screens to dive in. Sadly, no squeaky toys were provided, but hey, you can’t win ‘em all. 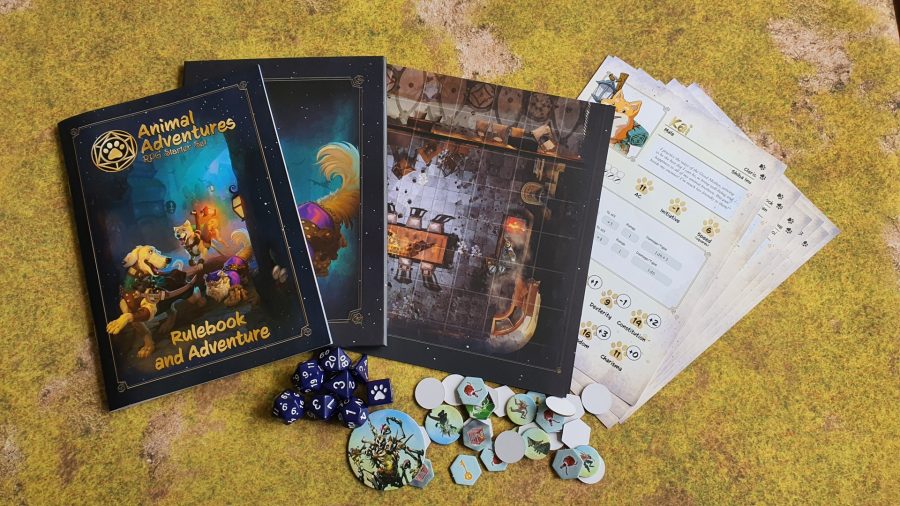 Animal Adventures starter set – what do you get?

The set’s box is nicely made, in the three-inch-deep A4 size that’s become the standard for RPG starter sets, with bold colours and artworks that immediately set the light-hearted tone, and will draw a grin from even the biggest sceptic (yours truly). 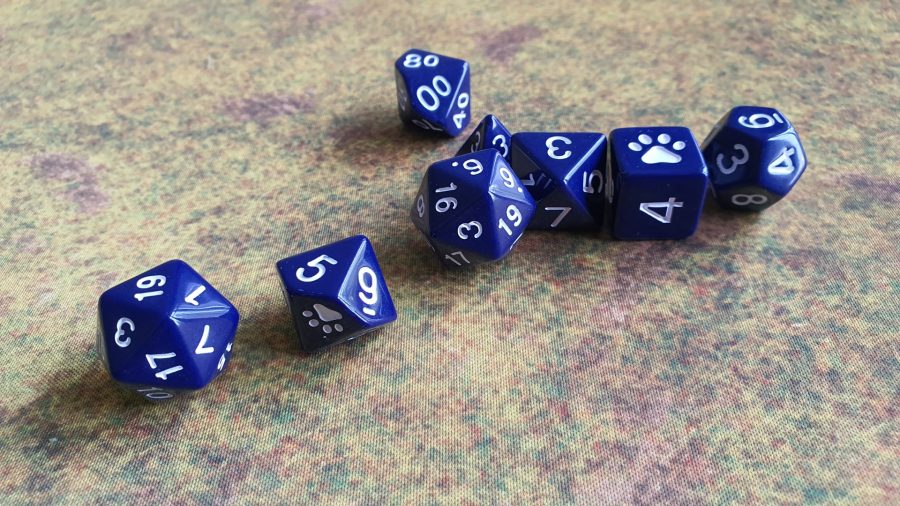 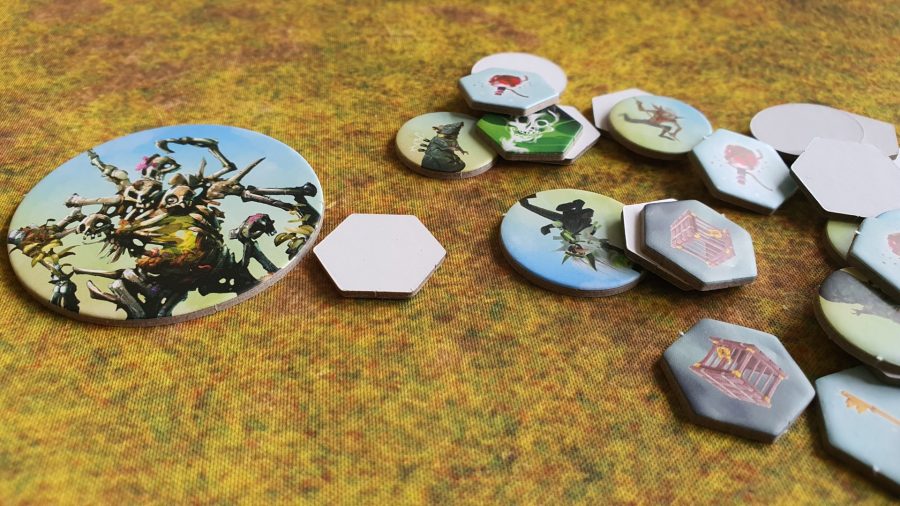 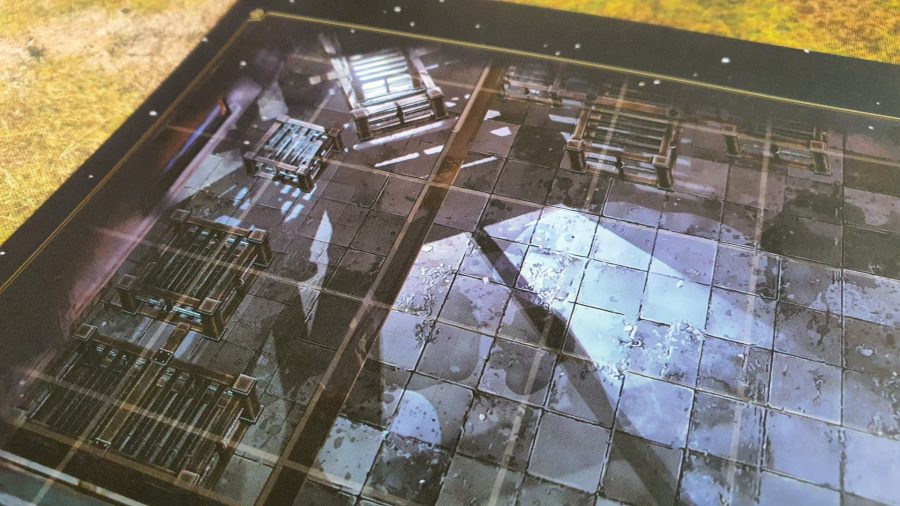 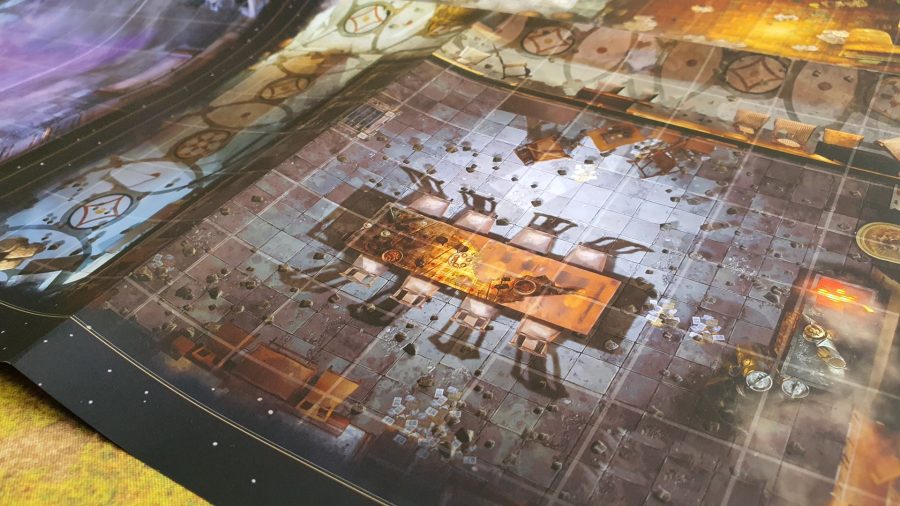 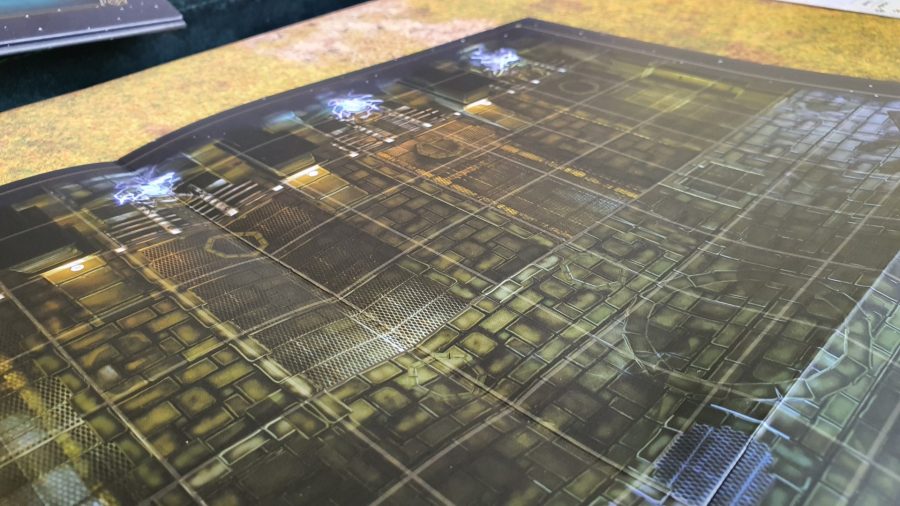 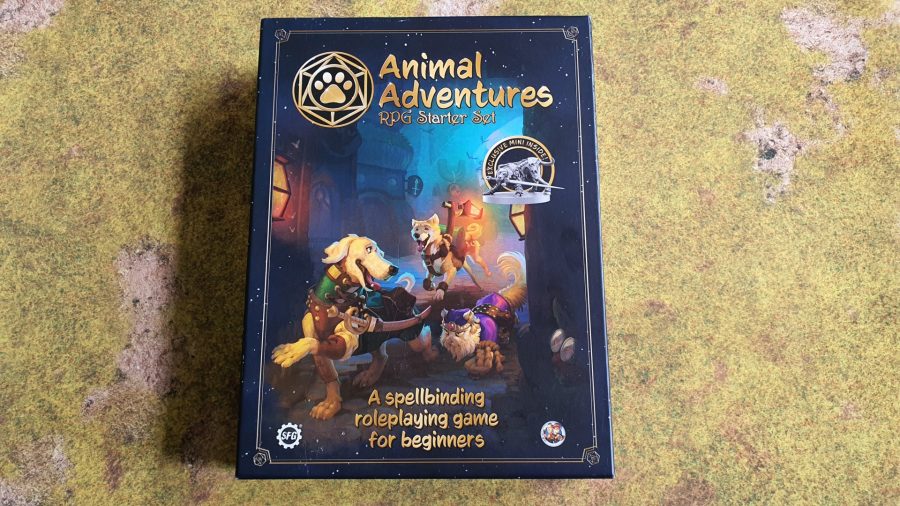 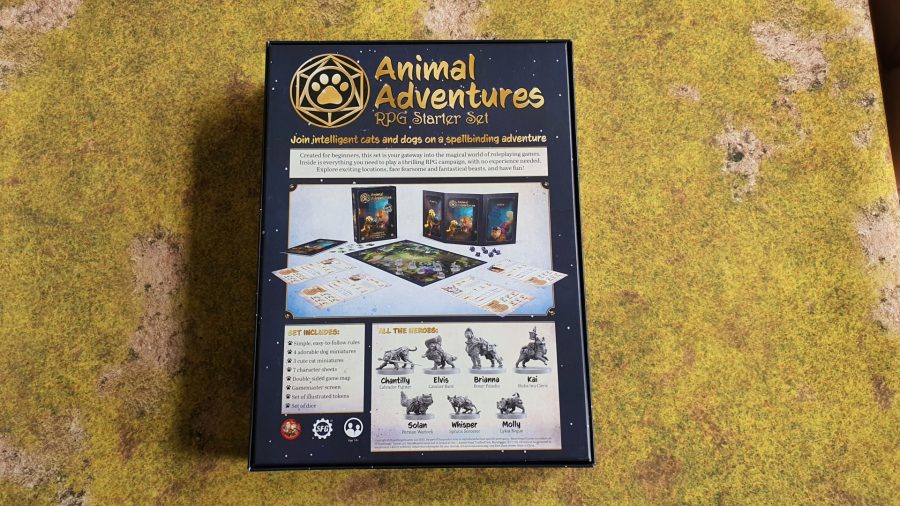 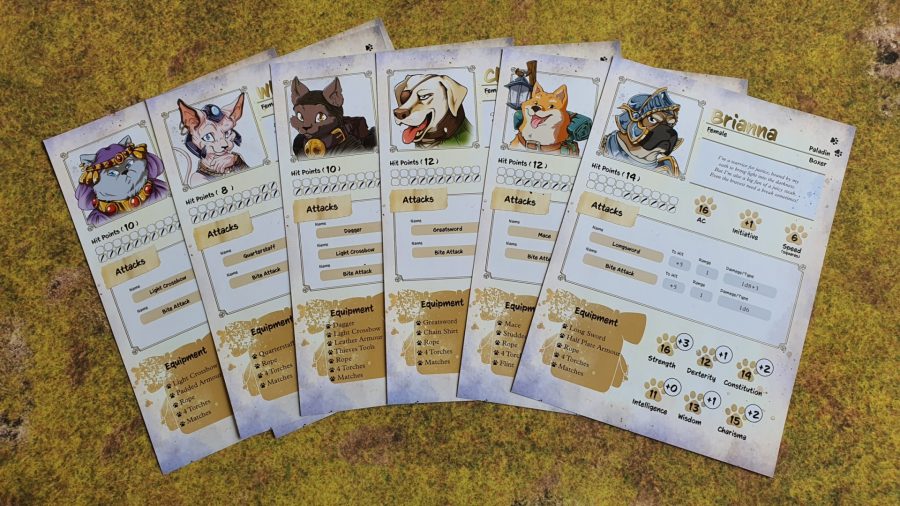 Claw it open, and you’ll find:

It’s a straightforward, lightweight set, and that’s definitely a good thing. A GM screen is a particularly welcome touch – and not one that you’d necessarily take for granted, in a box that costs $39.95 / £29.99, and already contains seven miniatures.

If there’s one weak link in the chain, it’s the tokens, whose flimsy card and one-sided print job stand in stark contrast to the lush finish on the map and GM screen. But, honestly, it’s a passing quibble. They’re more than usable, and, if savings were to be made anywhere, I’m glad it was here. The overall impression is that Steamforged properly thought through how to make sure this box offered a game that was dead simple and 100% ready to play. All of which is great and everything, I hear you cry – but what about the puppers? 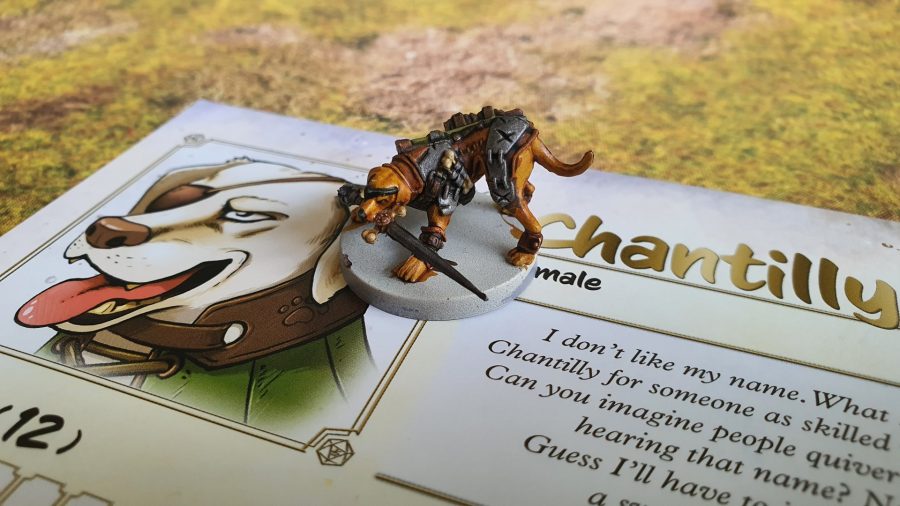 As is so often the case, the core of this box’s value is in the tiny plastic people (so to speak). The provided minis – a pick and mix from Steamforged Games’ ‘Dungeons and Doggies’ and ‘Cats and Catacombs’ ranges – are well chosen, both for a balanced RPG party, and to give you a variety of styles to paint (if painting miniatures is your jam).

The starter set comes with seven minis in all – four dogs and three cats – nestled very tightly in their plastic tray. They’re made of PVC plastic, and each comes in one moulded piece, fixed to a round plastic base (25mm diameter for the pooches, and 20mm for the kitties).

Your gallant adventurers are: 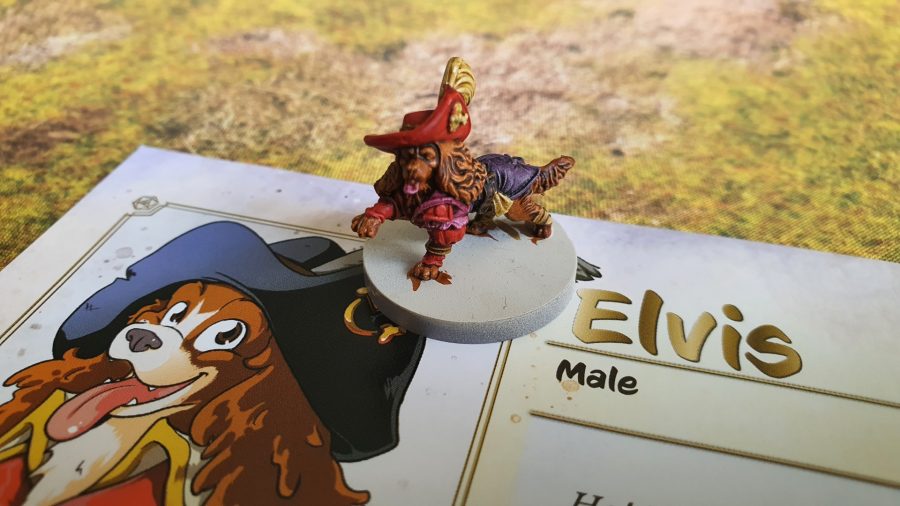 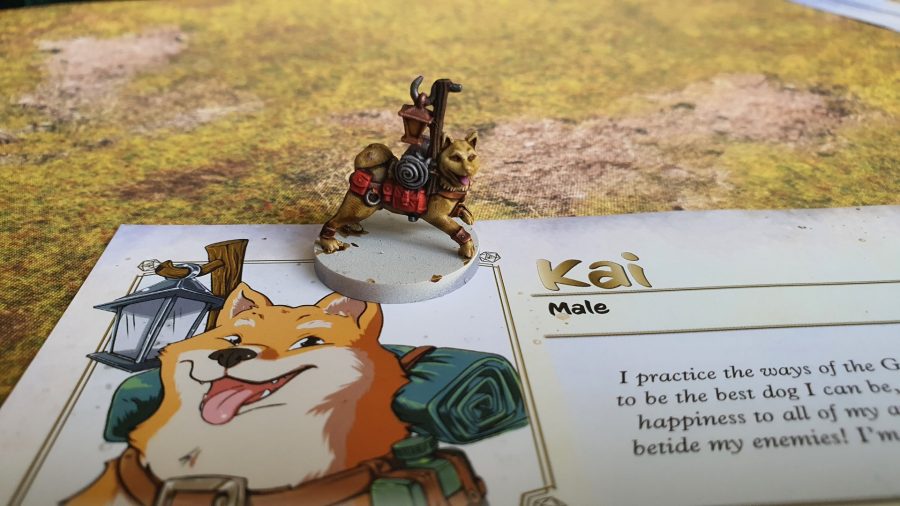 For me, these minis are a tale of two halves. On the one hand, they’re pretty detailed, with some downright brilliant artistic touches in Russ Charles’ sculpts – and being fixed to the bases means that, right out of the box, they’re really solid, cool little models that you can whack right down on the table and start playing. Ideal for a starter set.

The teeny, super detailed miniatures are tricky to paint

On the other hand, that beginner-friendliness wears off if you’re planning to paint them. The teeny sculpts have very little clearance from their bases, making most parts of the models’ furry underbellies a pain to get to. You could cut them off the bases for painting, but you’d risk damaging their cute widdle paws, and, frankly, I couldn’t bring myself to do so.

Then there’s the size issue. These minis are nearly 40% smaller in scale than your average modern, 32mm-base Warhammer 40k or Age of Sigmar miniature, but pack in a comparable level of detail – meaning you’ll need a small brush, a steady hand, and a good deal of experience to paint them well. I’ve been painting Warhammer for a few years now, and still found these some tricky blighters to get my brush around. 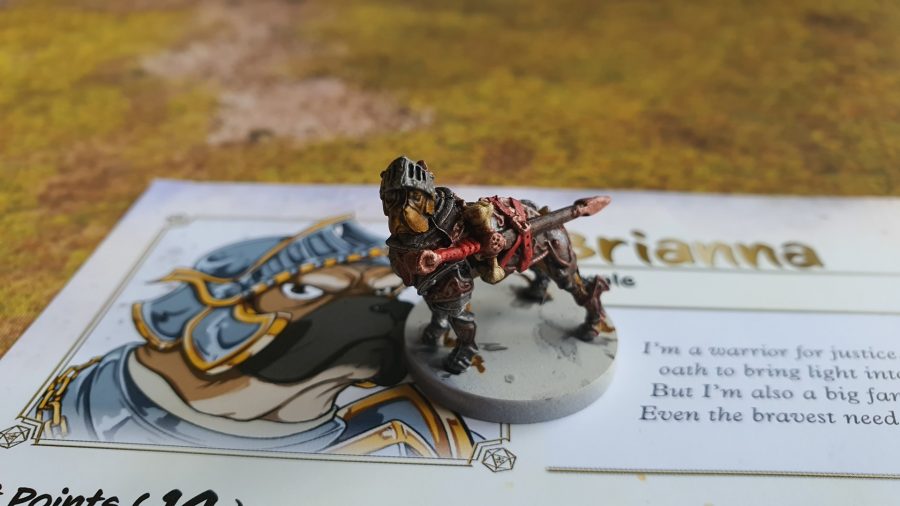 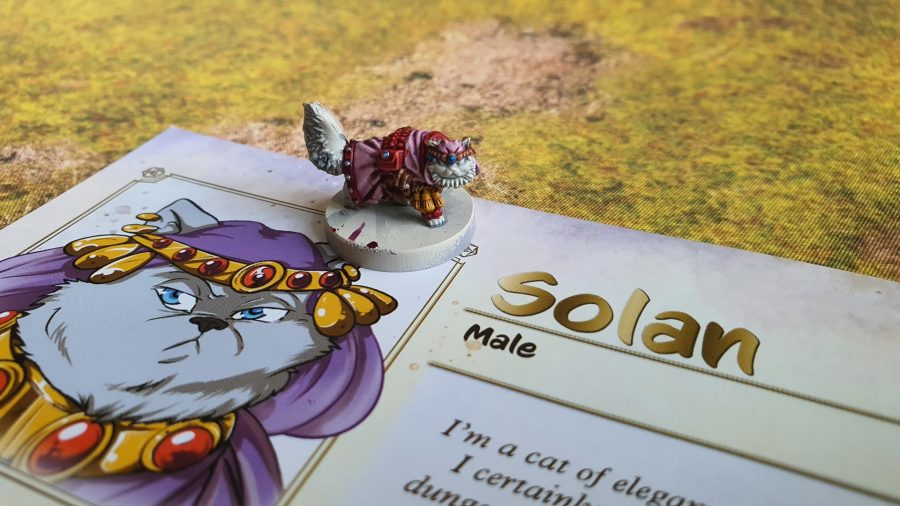 As a result of their one-piece construction, each mini also has very pronounced mould lines, which – for once – I didn’t remove before painting, only because I didn’t think I could do so without damaging the models’ dense and tiny details. This will present no problem to many players, but, to the mini painters considering this set: beware.

There are others? These are the best tabletop RPGs around

Leaving aside my personal tribulations as a member of the obsessive, plastic-scraping, brush-soap-owning miniatures ‘elite’, it has to be said that these minis are absolutely brilliant for their intended audience: tabletop RPG fans who want to play D&D with cute little animal characters. They’re detailed, well-made, characterful, and low-maintenance – exactly what you want from D&D miniatures. But what about the game you’re going to play with them? 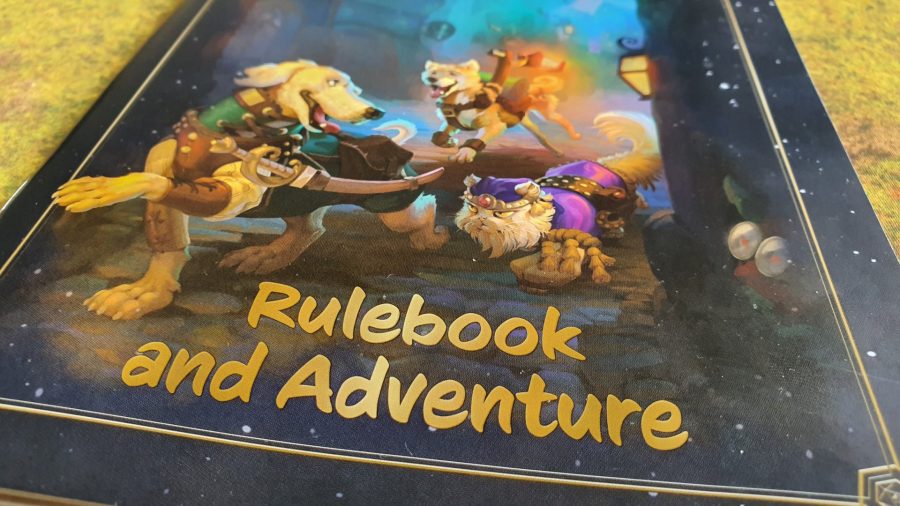 Given that Animal Adventures is based on the 5E Open Gaming Licence (OGL) – and therefore on phenomenally solid ground in terms of tabletop RPG rules quality – you could be forgiven for thinking this was an area where the Animal Adventures starter set would rest on its laurels a bit.

The Starter Set rules make D&D 5E even easier to learn; and it's surprisingly well done. Bear in mind that the GM will still have the toughest job - but well-phrased tips should help them along.

Au contraire. For me, its compact little A5 “Rulebook and Adventure” booklet was always going to be an important point of critique, because, unless Animal Adventures offered something strikingly distinct that regular D&D couldn’t, I couldn’t see the point in this existing as a standalone game, with its own starter set. Steamforged Games could merely have released 5E sourcebooks and minis for its primary-coloured world of pet pals and cutesy capers, and it would have provided precisely the same content to the same people.

Fortunately, though, this little book does offer something extra special: it sets out, immediately and unabashedly, to simplify the core gameplay of 5E (and roleplaying in general) and make it more palatable for absolute beginners – and, most especially, for young people. Successfully softening those barriers to entry, while keeping the core experience of the game intact, is no mean feat – and it’ll be up to you to decide whether Animal Adventures’ ‘easy mode’ is right for you and your players. For my part, I was pleasantly surprised by the neat setup presented in its seven small pages of rules. 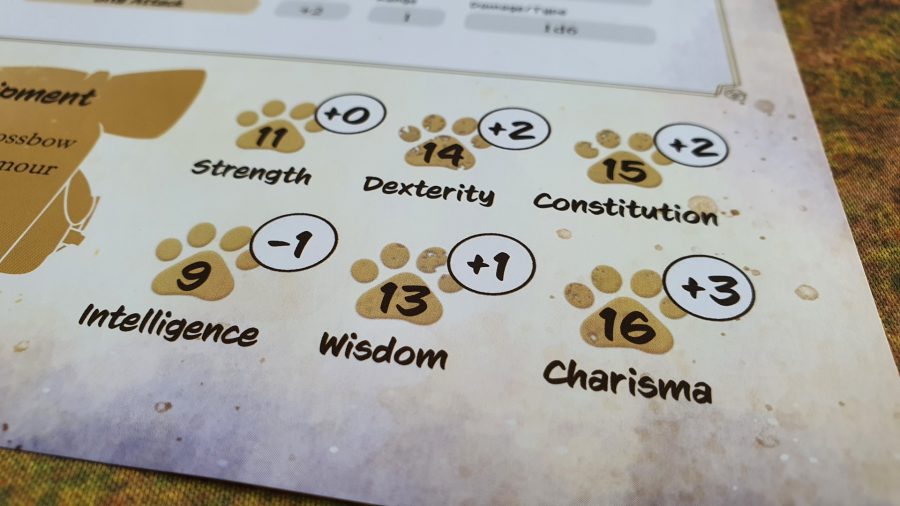 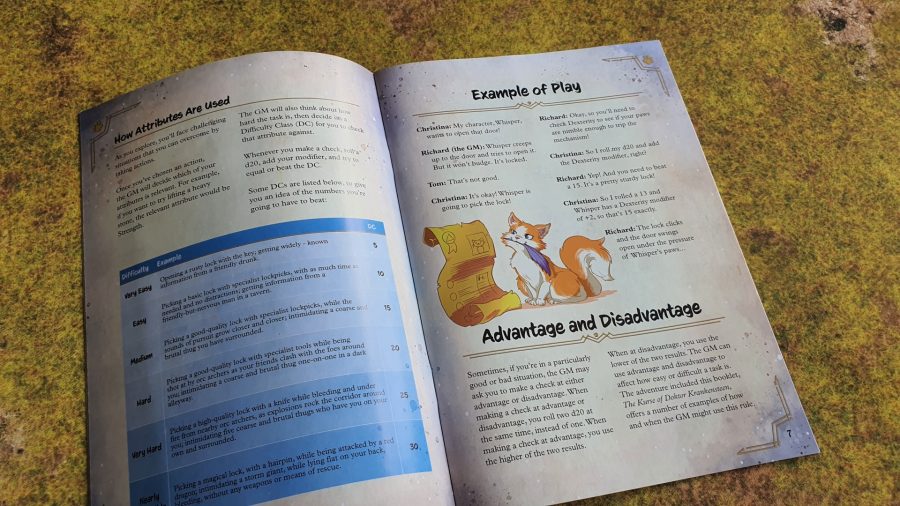 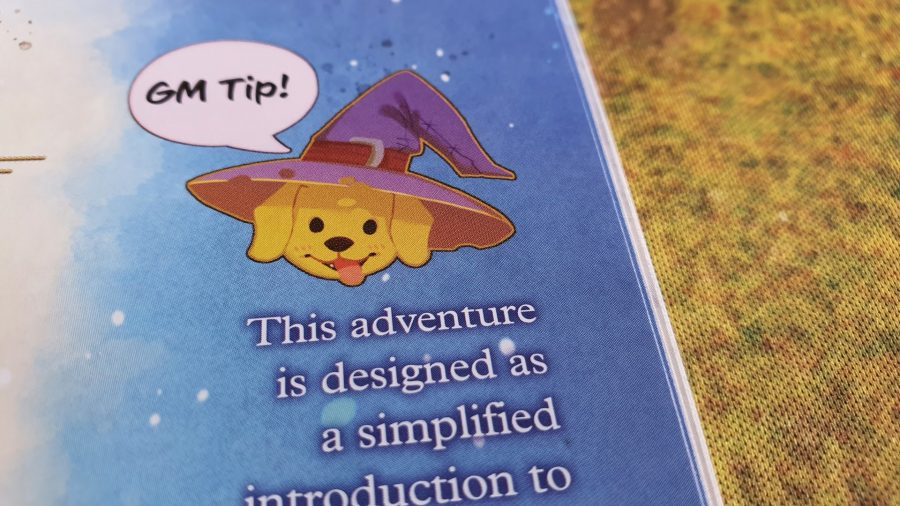 While it still uses a system of rolling a d20 and adding a modifier, the Animal Adventures starter set entirely strips out 5E’s Skills and Proficiencies (stats for tackling specific challenges, like Persuasion, or Stealth), and simply tests the character’s most relevant core Attribute (Strength, Constitution, Intelligence, etc). Just like that, your players have 12 key numbers (six stats and six modifiers) to worry about, instead of 30. It’s a small change, but reduces a significant amount of friction from your first games.

In addition, the section guiding the GM through the starter set’s adventure has some very sensible and plain-spoken tips for keeping play flowing; some good introductory text to read out in each area; and clear reassurances that fun is more important than rules, instilling the correct ideas about RPGing early on.

The adventure itself is straight up and down, well-trodden level one Dungeons and Dragons fare – a rescue mission in a mad alchemist’s lair that’ll see your paw-footed party sneaking through a sewer, battling undead critters, and investigating rooms in the headquarters of the dastardly… sigh… Doktor Krankensteen.

Thought-provoking it ain’t – but it’s simple and engaging enough, and the combination of game map, minis, and enemy tokens do a solid job of bringing the scenario to life, for players whose ‘Theatre of the Mind’ muscles are only just developing. 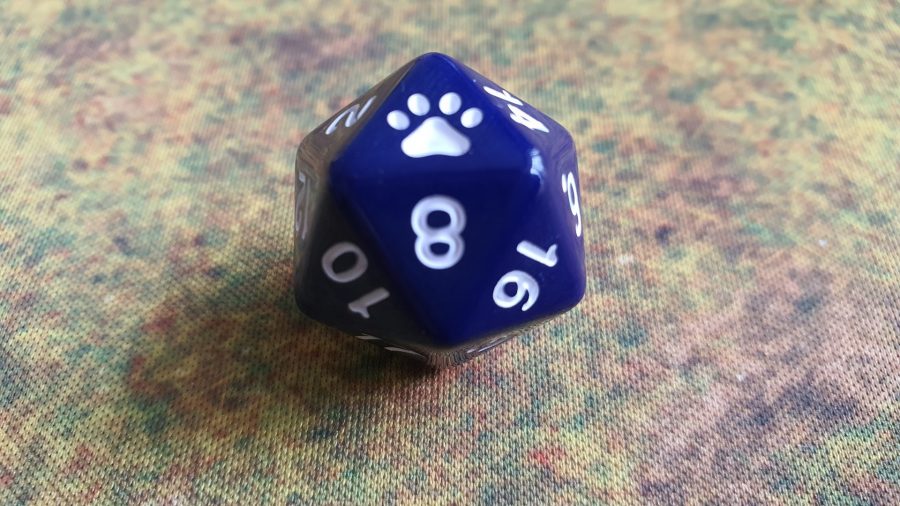 Animal Adventures starter set – who is it for?

Which brings me to the inescapable verdict that, to all intents and purposes, this Animal Adventures starter set is a well-presented, surprisingly robust and well thought out introduction to D&D for children – or possibly adult beginners whose arms you’ve had to twist hard to get them to play by telling them ‘it’s so easy, seriously’.

More experienced roleplayers can try the free adventures, or Secrets of Gullet Cove

More experienced groups of roleplayers – D&D old hands that own the core books and know what they’re doing – won’t get much out of this box. If that’s you, and you’ve a hankering to pilot your beloved Dachshund through dungeon swordfights (because, let’s face it, you’re playing this primarily to roll a character for your real-life pet) you’d be best off using Steamforged’s free online rulesets for Dogs and Cats, along with one of the three free adventures on their site – or the Secrets of Gullet Cove sourcebook, if you’re feeling piratical.

If the idea of repackaging Dungeons and Dragons 5E into a world populated with Chihuahua Wizards and Tabby-cat Rangers makes you snort with haughty derision, well, there are tons of D&D 5E books and other tabletop RPGs out there with more serious, gritty themes for you. If, on the other hand, the idea has set tails wagging among your kids, and/or RPG-curious pals, this is an excellent starter set fur the price, that should give you, ahem… paws.