My warband is not in a good way. Enemy units have split my champion from her followers, and the skeletal Cold Bones have debuffed her damage. I need to move her to the nearest objective hex and place my banner if I’m to have any hope of winning this round – but, with the enemy champion eyeing up my feeble Quartzlings, it looks like even that won’t be enough to stave off my opponent’s advance.

A few elemental attacks, and a couple of protective buffs later, my defeat this turn is made certain. My champion is knocked out, and an unfortunate, rocky little Quartzling goes with her. But not to worry, we’re immediately into the throes of the next round, with my units rallied and better positioned to outmanoeuvre my foe. We sally forth into a couple more tug-of-war rounds of back-to-back action, and soon enough the game is over, with a heap of daring plays, emergency retaliations, and a healthy chunk of desperation to show for it – all within a concise 45 minutes.

And that’s the central attraction of Godtear – speed of play. A two-player miniatures skirmish game that dispenses with templates, tape measures, terrain, and reams of esoteric combat rules hidden deep within thick army codexes, Godtear operates through simple, but robust, mechanics that make for action-oriented battles. There’s no downtime or moments of rest, and every turn is critical to your success. Streamlined and impactful are the watchwords of Godtear’s gameplay.

In the game’s fantastical universe of anthropomorphic geodes, and ninja-esque elves – among other fun, but fairly archetypal mini-factions -, the Gods have perished. Shattering into crystal shards imbued with deific energy, they fall from the heavens, explosively piercing the world’s surface to leave an exhausted planet of war and despair. Drawn to their power, mortal champions search for these fallen crystals, battling to claim the Gods’ energies for themselves. 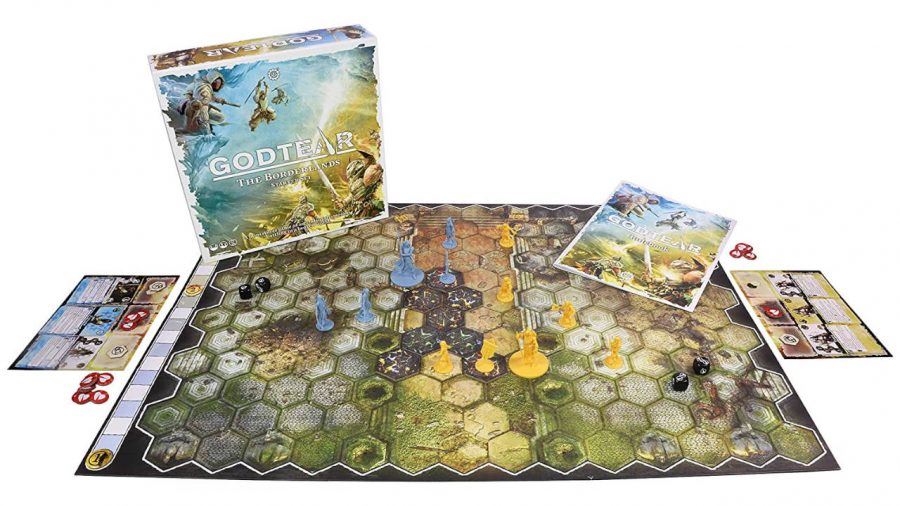 And this is where you come in. You’ll command these champions, as well as their loyal band of less-mighty followers, in battle across a hex-grid, moving units, attacking enemies, and claiming objectives in pre-generated scenarios. Hop around the board to knock down enemy champions and nab objectives just outside of their reach, carefully deploying your squishy, but dispensable, followers to block the path of any would-be banner crusher tyring to foil your objective-taking.

mechanics capture the most appealing elements of Godtear’s skirmishing

So far, so standard – but Godtear manages to shake up this typical moving-attacking-objective-seeking formula through an interrelation of mechanics that, while not exceedingly novel, are refined to ensure your matches consistently capture the most appealing elements of its skirmishing.

Much of this comes from the highly specialised playstyles of its champions. Split into four classes that dictate their different point-scoring penchants, each brings a tangible difference to the board. Slayers excel at knocking down enemy champions, Maelstroms at wiping out followers, Shapers at planting banners, and Guardians at protecting the rest of their warband. 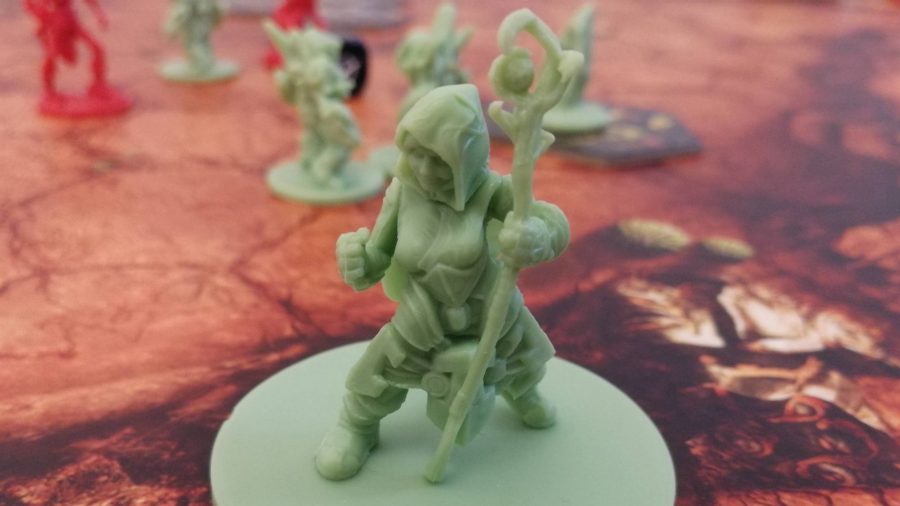 As the Shaper champion Nia, my combat ability paled in comparison to that of my enemies, and I could do little more than ward off enemies while navigating to objectives. But as Blackjaw, a Maelstrom, I was able to rush the enemy, picking off followers while keeping banner-placement on the back foot.

In any case, forward aggression is the name of the game. Whether charging enemy units or beelining an objective hex, your warband will forever be marching onwards. Retreating has few, if any tactical benefits, and if any of your units are knocked down from enemy attacks, they can be swiftly brought back to the board on your next turn. It makes for consistent action. There’s no reason to surrender, and no means to fully rout your enemy, either.

Miniature might: These are the best war board games

But, while the action is constant, it’s never dull. Chaining moves and shrewdly anticipating opponents’ decisions makes for some gloriously deep in-the-moment tactical gameplay. In an early match, I found my champion all but immobilized by the combined effects of my enemy’s units, limiting my speed to such an extent that I could no longer reach an objective hex to plant my banner, and blighted by pernicious hit modifiers that made the chances of my attacks damaging anything close to nil.

A powerful play that stunted my plans, its implication was /so/ rewarding for my opponent, and so aggravating for me, because it came about almost casually, organically, in the usual rhythm of play. 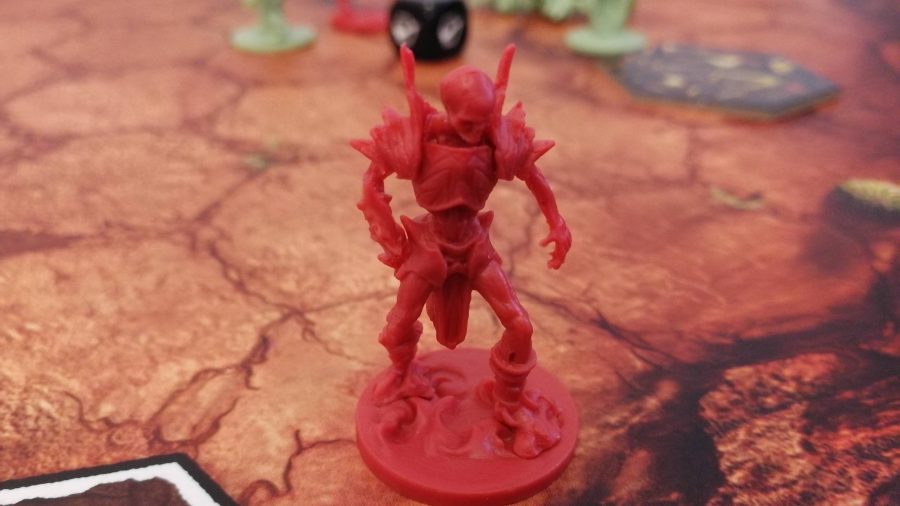 While not possessing the same specialist depth as other skirmishers, and sure to pale in comparison to the scale and variety of Warhammer or other larger-scale miniatures games, the scope of Godtear’s tactics well suits its focus: speed of play.

With each turn performed in kinetic movement, Godtear superbly finds a midpoint between, on the one hand, offering players a technical platform from which to craft strategically gratifying plays, and, on the other, streamlining such operations to keep things moving. There’s no singular, right decision to make on any move, but not such a wide variety of options as to wear you down.

And this freshness of play is retained throughout a full game, driven, almost single-handedly, by its charming turn-taking system that neatly complements the rhythm of action. Played across five rounds, players will attempt to perform point-scoring actions – whether knocking out an enemy champion, or successfully claiming an objective – to move the score token up or down a ladder, with you and your opponent at either end. If that token is positioned on your side of the ladder by the round’s end, it’s yours to claim, and earns you the points printed on its rear. 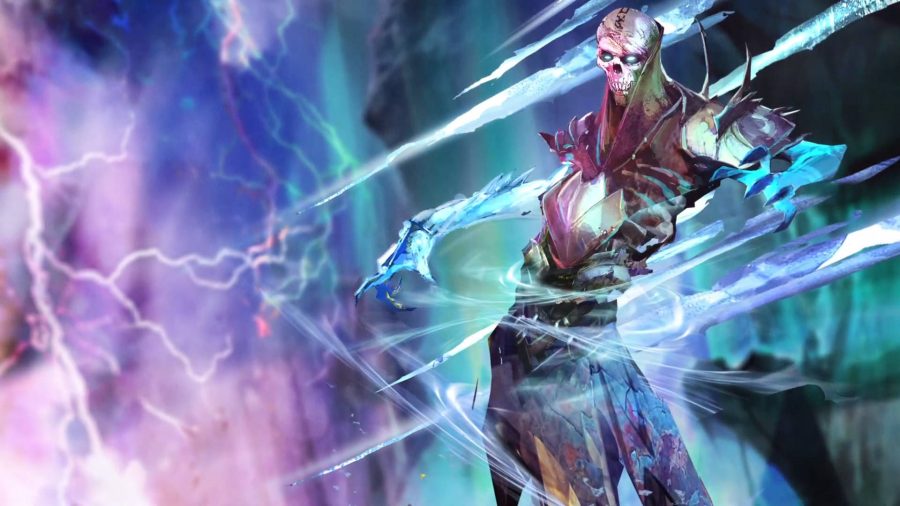 A simple premise, it provides constant motion to the gameplay. Each round presents a new opportunity to retain your success or claw back victory from your opponent. Never safe resting on your laurels, nor confined eternally to the gutter from one, poorly-planned early move, the opportunity of victory always feels firmly within grasp. With middle rounds rewarding high points, and the early and late rounds dropping in value, players who lost the early game can easily catch up on the scoreboard.

And this consistent engagement is fuelled further by dynamic board adjustments. End-of-round actions specific to each scenario allow the losing player to alter the board’s state of play. Sometimes they’ll remove objective hexes, add new ones, or move their warband in a specified direction. It all makes for a subtle, but powerful addition, ensuring skirmishes don’t slump into a slog of repeated movement and attacks, but stay dynamic.

Tabletop tactics: Here are the best strategy board games

The losing player is given not only a fighting chance but an advantageous influence over the coming round, pushing you to not only consider what you do on your turn, but where you may end up by the round’s end, careful not to make yourself vulnerable to the loser’s vengeful guile.

In a particularly aggravating end-of-round play, my opponent placed a line of objective hexes between my champion and follower units, ostracising my little Quartzlings, and preventing me from using them as a defensive blockade around my champion. It left me open, vulnerable, and unable to claim an adjacent objective hex as I’d planned. But more than that, it kept me on my toes in the coming turn. 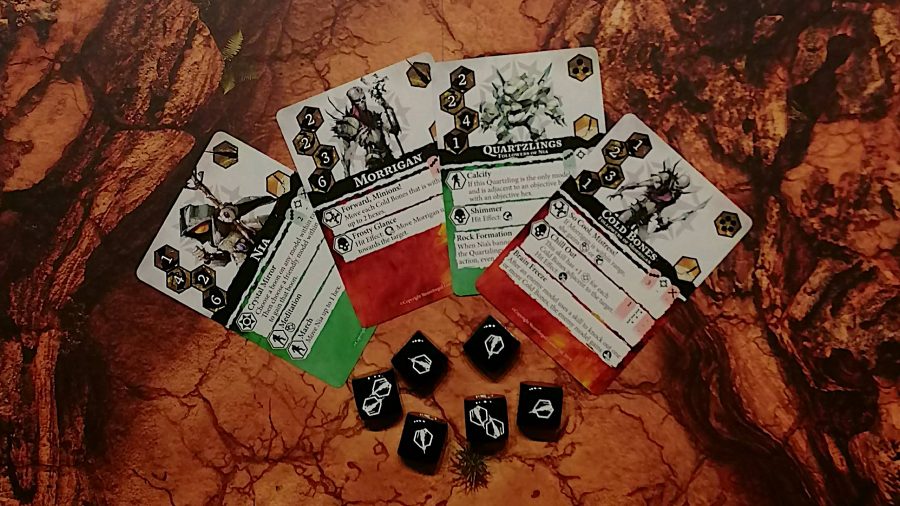 Playing Godtear, it becomes clear that every step has been taken to prioritise velocity and consistency of action above all else. Champion and follower reference cards sit permanently in front of you, clearly listing the actions available on your turns; the board’s hexes are used to measure movement and range; and even the back page of the rulebook pithily summarises the entirety of the game’s mechanics and operation in one, neat, A4 page. There’s no need to digest information before play or commit rules to memory; just turn up to the tabletop and get stuck in within an instant.

There’s no need to commit rules to memory before play

Where Godtear struggles is in its moments of rest. When playing the starter set, I occasionally met moments of limited action, when my opponent and I had exhausted our actions for that round with nary a hint of savage action or breakneck movement to show for it. This comes largely from the board’s size and pre-generated scenario design, which caters to the full warband size of three champions. 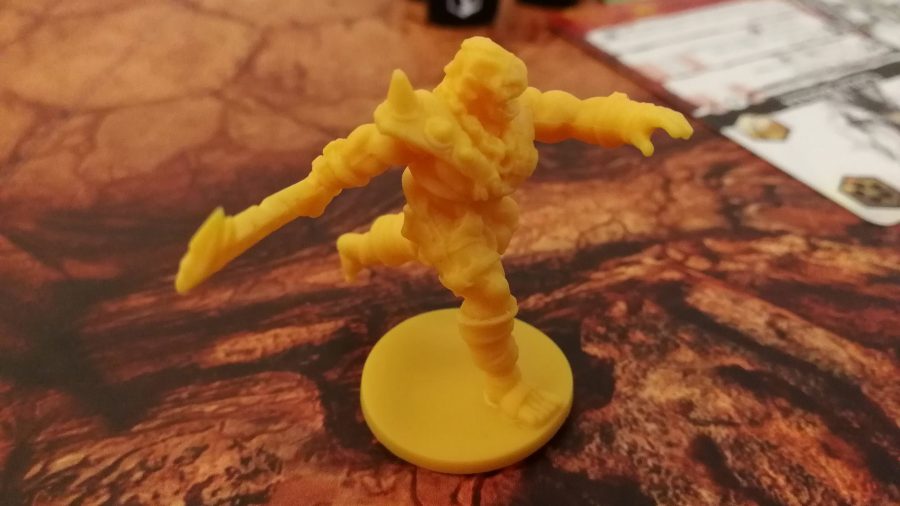 When fielding only one champion each, canny deployment is essential to make sure action sparks from turn one. Place a slow-moving champion away from the central line of the board, and it will take a whole round before they can partake in the game’s normal thunderous rhythm.

Equally, the tail-end of a game can flag if not fully populated with multiple warbands. As Blackjaw, I killed all my opponents’ followers by the end of turn three, consuming all my Maelstrom-specific point-scoring opportunities, and leaving me to frantically jump around the board hoping to claim objective hexes. All the while, I was waiting for my opponent to recruit more Cold Bones that could feed my slaughtering thirst.

Minis unchained: These are the best free wargame rules

At full capacity, players field a warband composed of three champions and their accompanying followers, mixing champion classes to create a heterogeneous force catering to multiple playstyles. With more units at your disposal, they can be spread across the breadth of the board, and their actions combined into even more glorious combos.

When all goes to plan, Godtear excels as a fast-paced, action-focused skirmish game of simplified mechanics that offer surprising strategic depth. It’s quick to learn and quick to play – a fab addition for anyone keen to extend their skirmishing experience, or peek behind the curtain of miniature wargames for the first time.