Who doesn’t love a good dice game? Whether you’re a fan of the original six-sided cube, or are more partial to the funky polyhedrons of D&D dice, rolling dice is a universal joy. If you’ve experienced a tense moment in a tabletop RPG when your fate depended on a single roll, or poured scores of dice across a table in a wargame like Warhammer 40k, chances are you’re very familiar with the joy of dice games. But are you playing classic dice games? If not, you’re missing out on a lot of easy, accessible fun.

Many of the best board games of recent years depend on dice, but true dice games, ones where the dice do all the work, tend to be a bit older. Which makes sense: people have been playing dice games all over the world, ever since human cultures could hammer a bone or rock into a rough square shape.

The classic dice games on this list may not be quite that old, but all of them have stood the test of time, remaining firm favourites over the years. Despite this, there’s nothing stale about the very best dice games. You’ll find no yawning in Yahtzee and plenty of laughter in Liar’s Dice.

Enough rattling on, let’s roll up to our list and discover:

The best dice games of all time 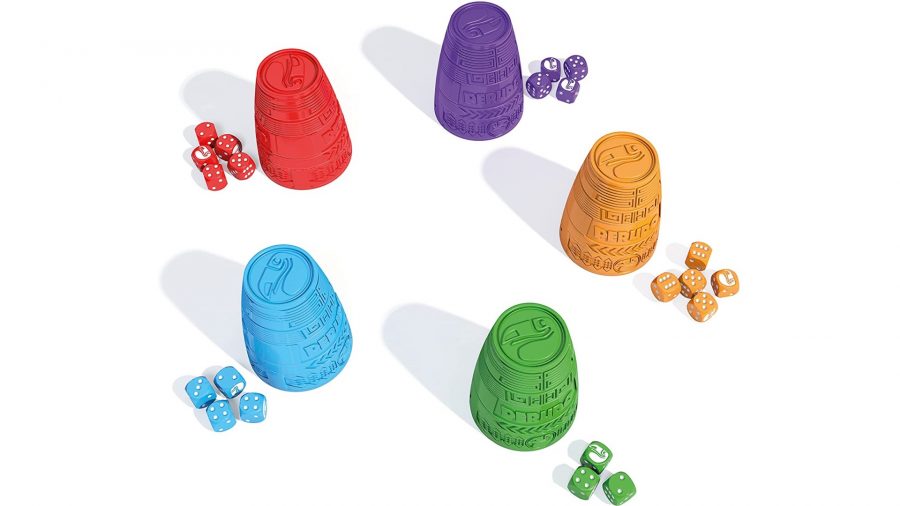 A centuries-old dice game with mysterious origins, Liar’s Dice, commonly known as Perudo or Dudo (Spanish for “I doubt”) is a fantastic bluffing game that can be learned in less than a minute. Plus, it was invented either by the Incan Empire or on pirate ships, depending on who you believe, so that’s pretty cool.

Here’s how it works. Everyone rolls their own dice but keeps them hidden. After that, the bidding begins. You bid based on how many dice showing a certain number you feel there are among all the dice at the table, going off your own dice and what you reckon everyone else has rolled. Any player can increase the bet by increasing the number of dice (from four 4s to five 4s) or by raising the value (eg from four 4s to four 5s). This happens going round the table until a player decides to challenge the previous bet. After that, the dice are revealed, and if the bet is successful, the challenger loses one of their dice. If it’s not, it’s the bidder who must forfeit a die.

There are different variants, but that’s pretty much it. It’s a simple ruleset, but you’ll find there are plenty of opportunities for sneaky bluffing and strategy within. You’ll also discover that the only thing better than rolling dice is rolling dice in secret. 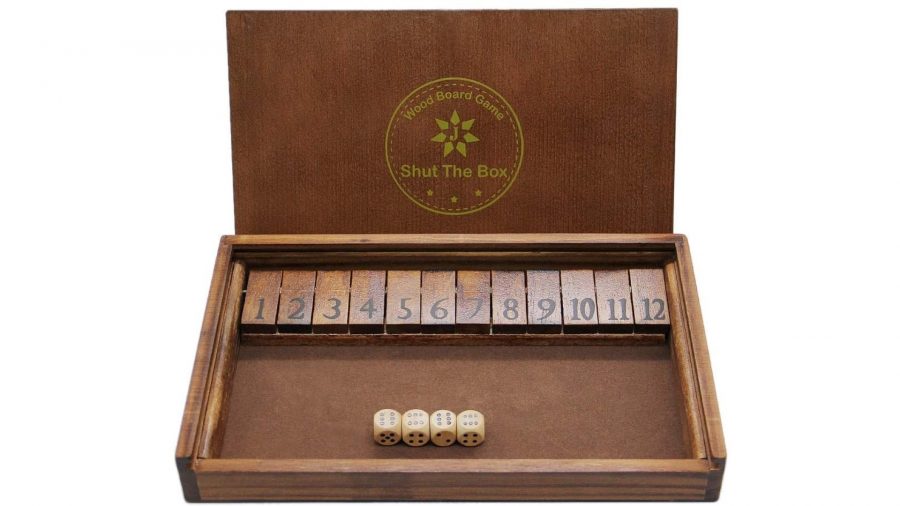 What’s in the box? What’s in the box!? Nothing, actually. In fact, in Shut the Box, the ‘box’ is really just a wooden frame with numbers on it. Your aim in this dice game is to lower the numbered wooden slats and by doing so, shut the box. You do this by rolling two dice and lowering panels of your choice which add up your die score. Those left over at the end form your points, and you want the lowest number possible to win.

Game as old as time: How to play Dominoes

Like most classic dice games, many of which started their life as gambling games, Shut the Box is simple, featuring a bit of strategy mixed with a lot of chance. It isn’t heavy enough to support a multi-hour games night, but it’s surprisingly compelling for what it is, serving as a good warmup game or a fun way to fill a spare half-hour. 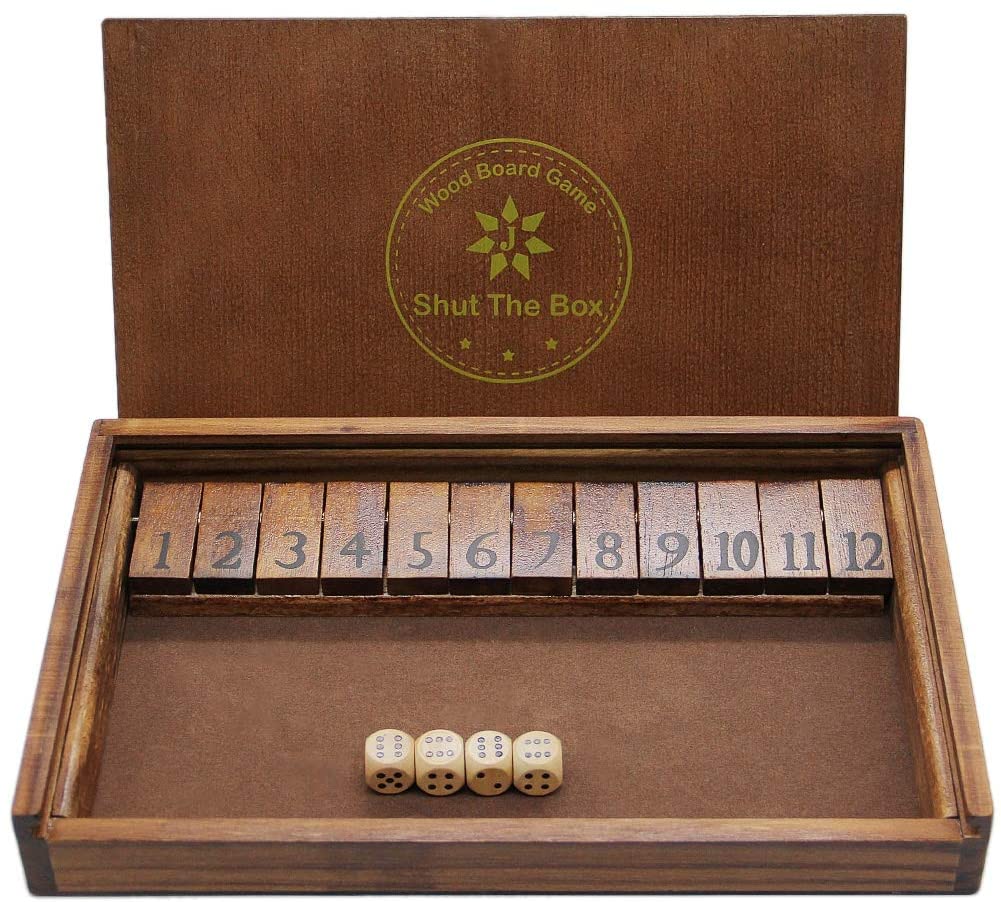 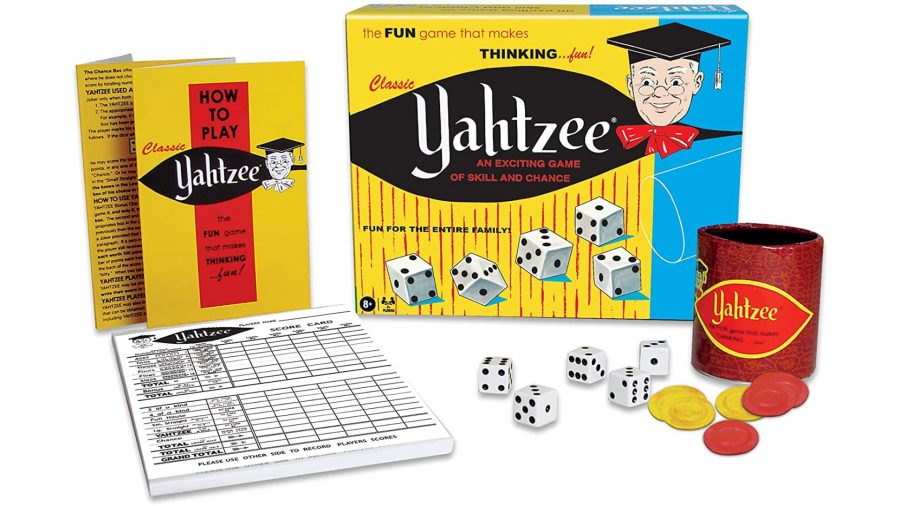 Originating from the 1950s, Yahtzee is one of the most well-known dice games of all time. It doesn’t just get a pass thanks to its fame, however, Yahtzee has truly earned its place on this list, thanks to addictive gameplay that strikes the perfect balance between luck and skill.

In case you’re not familiar with Yahtzee, it’s all about rolling and re-rolling a set of five dice to try and meet the requirements of certain categories (many inspired by poker, for example, three-of-a-kind) and score the most points. The trick is that you decide the scoring category after the rolling is done, and you can always ‘hold’ specific dice instead of rerolling them, to try and land the best possible combo.

One great thing about Yahtzee is how easy it is to get a game going. Yahtzee is enjoyed by all kinds of players, young or old, and easily rivals the best family board games. It can be played as a solo game, or with as many friends as you can find. Plus, it’s so well-known that you’re unlikely to get any complaints from the usual, non-boardgaming sort. 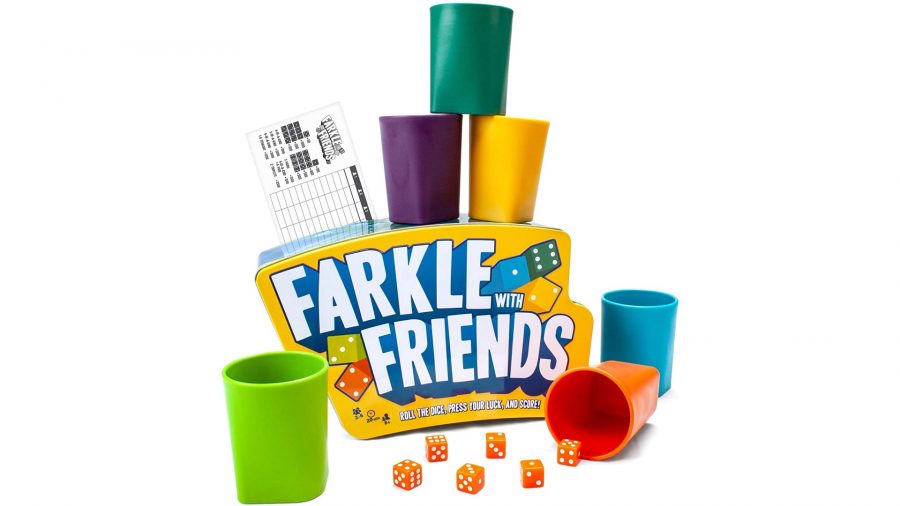 Farkle is a bit like a simplified version of Yahtzee, where again you’re rolling dice to hit poker combinations. However, whereas Yahtzee is all about deciding which dice to hang onto to improve your overall ‘hand’, Farkle removes this element of strategy. Instead it’s a game that’s all about greed and knowing when to push your luck.

Get quizzical: The best quiz games that aren’t Trivial Pursuit

See, in Farkle you remove dice (this dice game has six to Yahtzee’s five) when you want to cash them in, and can then roll again with the remainder. But if you ever roll a combination that scores zero, known as a Farkle (presumably after the noise a player makes when this occurs) all your points go down the drain. Should you take that risk in the hopes of scoring big, or show some restraint and be satisfied with what you’ve earned? That constant choice hovering over each player provides plenty of tension. 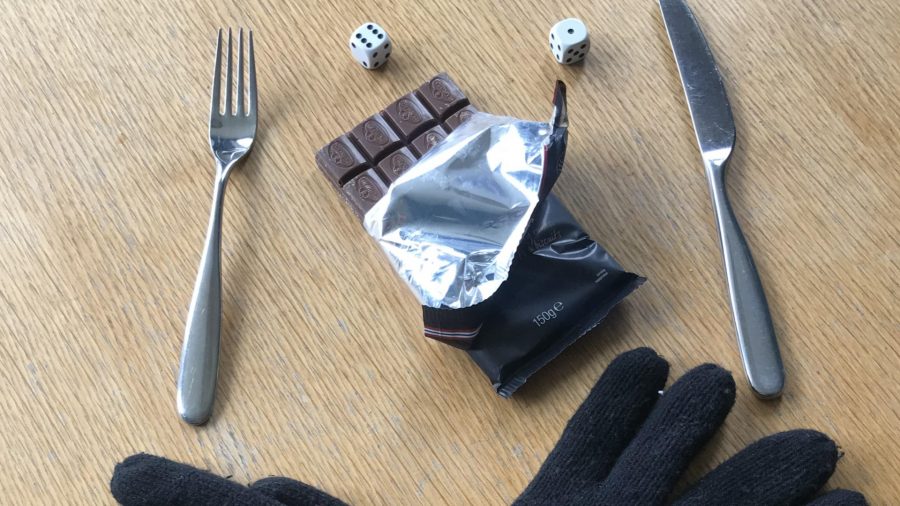 The Chocolate Game is a great family game as it works well both with kids and overly competitive adults. To play, you’ll need a hat, scarf, and gloves; a knife and fork; and a large bar of chocolate. Players take it in turns to roll the dice until someone scores a six. At that point they have to put on all the woolly gear, pick up the knife and fork and, so impaired, must attempt to haphazardly unwrap and eat as much chocolate as they can before someone else successfully rolls a six and assumes their place.

The Chocolate Game is fiercely competitive, not for the faint at heart

You might think it’s a stretch to call this a dice game, but it absolutely qualifies, as there is true magic to be found here. You’ll never watch a roll as intently as you will in The Chocolate Game, or cry out in such anguish when the die rolls onto the floor. Even those poor souls not particularly interested in chocolate will soon find themselves possessed by something, shouting at their fellow players to keep the dice moving as “Quick, quick, quick! She’s eating it all!”

The camaraderie builds among you as you all glower at the smug chocolate-eater, until you finally hit a six, at which point you whisk the hat off their head, snatch the gloves, and suddenly you are public enemy number one for the next three minutes (or 15 seconds, depending on your luck). Try it, trust us!