Dungeons and Dragons: Dark Alliance is a strange beast. Wizards of the Coast’s latest attempt to transport its classic tabletop RPG to the realm of videogames bears little relation to the roleplaying system on which it’s based. A co-op hack-and-slash that does away with collective storytelling and narrative exploration, Dark Alliance is one for the brawlers – the Barbarians of the party, who like to punch first and think later. And if it wasn’t for the game’s monotony, it might have been glorious.

Like most dungeon crawling, high-fantasy adventures, Dark Alliance is a journey of monster-slaying action. You and up to three pals will take the role of plucky adventurers, led by favourite D&D character Drizzt Do’Urden, and his band of equally adept warriors, Bruenor Battlehammer, Catti-Brie, and Wulfgar. They’re on a quest to claim the Shard, a magical item of elemental evil, or some such arcane power, and must hack their way through legions of monsters to prevent it from falling into the twisted hands of evil.

It’s that kind of generic fantasy flavour that colours most aspects of the game. Dark Alliance is all action – and nothing else. Brawl, bust, and beat your way through groups of monsters, from petty goblins to phantasmal wraiths, as you move between battle arenas in its distinctly linear levels. Your job in each stays the same: chop up one group of enemies, before moving onto the next, and finally making your way to a boss at the level’s end.

There’s some loot to pick up as you go, including consumable items that might heal or buff you mid-level, as well as cosmetics that can be equipped in the game’s central hub for stat boons. The occasional treasure chest might be hidden around a corner, but nothing is too far off the beaten track, and there are no surprises in store. After you’ve played the first couple of levels, you’ve seen everything Dark Alliance has to offer, and will only get more of the same from there on out. 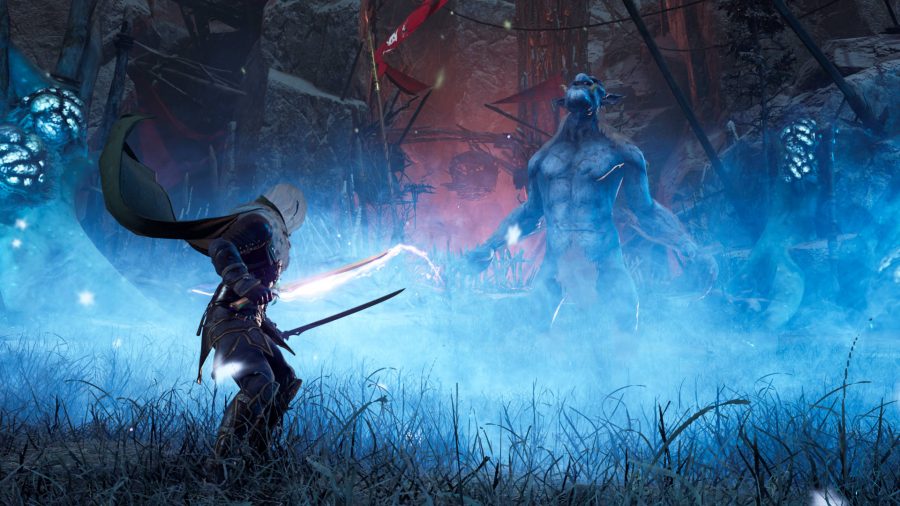 Bonus objectives provide little variety to each level, usually having you collect a certain number of frustratingly hard-to-spot items, or deviate from the straight and narrow path for an extra battle arena. Loot, similarly, feels unrewarding to acquire. Your stats might increase, and the colour of your tunic may change, but with no alterations to combat abilities or playstyle, your pick-ups end up becoming forgettable.

All of this repetition is made worse by the game’s frustratingly muddled fighting, which more often than not feels more like a dull slog than the fluid, brutal slash-fest it’s set up to be. Dark Alliance tries to create a combat style that lies somewhere between Vermintide’s frenetic mob fighting, and Dark Souls’ precision combat. It’s a strange mix, and not at all a happy one. Attacking feels unresponsive and listless, with no central rhythm; no ebbs and flows between your attacks and your opponent’s parrying blows.

It becomes most obvious when playing as the game’s poster child, Drizzt. He wants to play like Arkham’s Batman, gliding across the floor, and gracefully leaping between enemies in a finessed dance. But instead, his would-be-ballet of destruction usually descends into a chaotic brawl of button mashing, as enemies cluster around you. 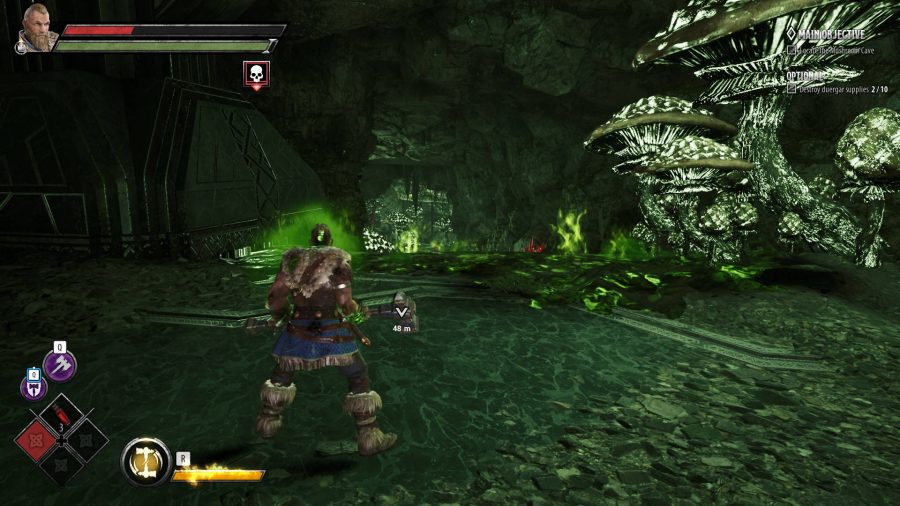 This isn’t helped by the game’s difficulty settings. I hoped upping the challenge might enhance the AI’s tactics and move sets, or at least stop them swarming the very ground beneath my feet. Instead, it merely piled them with extra HP, and dramatically increased the damage of their attacks, prolonging the slog.

Keyboard and mouse integration is also painfully poor. To play Dark Alliance on PC is to struggle. In the first five minutes, my cursor disappeared from every menu screen in the game, and refused to reappear until I exited and reloaded. Contorting your fingers around the game’s default keybindings is draining, and you can forget about using its enemy lock-on system. Requiring you to take your hand off the mouse, and use the arrow keys to cycle between enemies mid-fight, makes the feature entirely impossible to use. 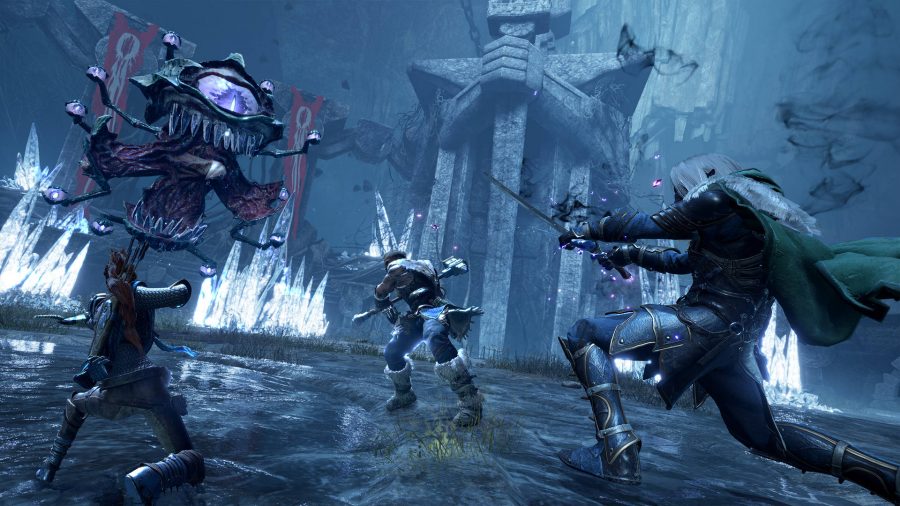 Its four playable characters certainly have variety. Next to Drizzt’s nippy scimitar slashing that can quickly gut single enemies, Wulfgar’s warhammer walloping is better suited to area-of-effect attacks, while Cattie-brie is the only true ranged fighter of the party. They each have different move strings, and are as useful in solo games as they are in co-operative matches. But this does little to alleviate the combination of a rhythmically irregular combat system, ungratifying arena slogs, and finicky controls, especially in a game that’s so singularly focused on fighting.

The game takes every opportunity to nod to its source material

Remove that not-so-small portion of the game, though, and Dark Alliance is a joy to behold. Icewind Dale makes for a fantastic setting that will take you through snowy tundra, miasmic mushroom caves, rickety goblin villages, and dank dungeon corridors. Monsters aren’t faceless creatures waiting to be destroyed, but full of quirky animations and entertaining quips. They sing, dance, and taunt you. The game captures the sillier side of the Forgotten Realms, without feeling ham-fisted or thematically awkward.

It also takes every possible opportunity to nod to its source material. D&D’s six Ability Scores are recycled as character stats, but with totally different in-game effects, and references to the world beyond are sprinkled generously throughout the game. After big battles, you can choose to take a ‘short rest’ to regenerate your health, or forgo the rest and boost the rarity of your loot. It’s not only a lovely way of mimicking a staple mechanic of D&D on the tabletop, but is also one of the more engaging decisions you’ll have to make. 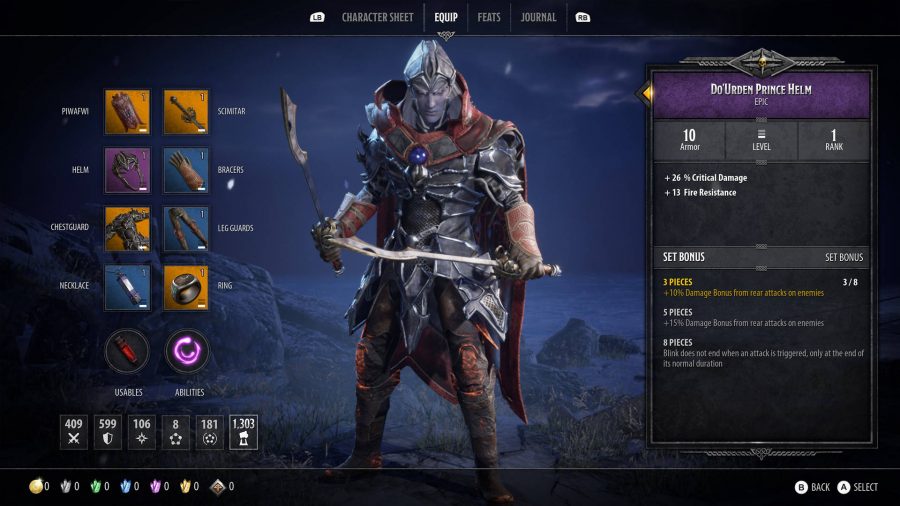 But its setting feels somewhat wasted. The game’s run-of-the-mill storyline is perfectly passable, and fairly expected from an outwardly narrative-light game. But the presence of several famous D&D characters, who have enjoyed fervent fan adoration over the last couple of decades, is harder to square.

Besides some short dialogue during transition areas, and the odd quip after combat, no time is given over to exploring the characters, or their role in the story. Those who recognise Drizzt’s gaunt face from R.A. Salvatore’s novels might get a kick out of seeing him prance about, but I’m no more clued up as to why I should care about the Champions of the Hall than I was when I started the game.

Dark Alliance sits as a disappointing attempt to realise an ambitious vision: bringing D&D’s pen-and-paper action to a videogame, while stripping out its roleplaying, storytelling, and exploration, in favour of hack-and-slash combat. It always seemed like a difficult ask, but, with its monotonous levels and unsatisfying fighting, even endearing nods to D&D source material can’t save Dark Alliance from missing the mark – and by a long way.

Its world is gorgeous and a joy to behold, but monotonous levels and muddled combat make Dark Alliance a slog to play.