Oscar-winning actor Benedict Cumberbatch (also known as the voice of Smaug the dragon in Peter Jackson’s The Hobbit movie trilogy, since we’re in fantasy mode) has provided the voiceover narration for a Dungeons & Dragons animated short film, released in a livestream on Thursday. In the very same stream, we saw the new MTG cards for Drizzt, Bruenor Battlehammer, and Lolth the Spider Queen. Gee, whillikers.

The four-minute-long animation, entitled “Sleep Sound” – which you can watch below – tells the story of celebrated D&D adventuring hero (and drow) Drizzt Do’Urden, as he is born to a spider-queen-worshipping cult in the shadowy Underdark, runs away to the surface world, and finally joins forces with swashbuckling allies Bruenor Battlehammer and Cattie-brie. It was broadcast as part of a 22-minute-long livestream by Wizards of the Coast on Thursday, which showcased snippets of news on several special projects featuring Drizzt Do’Urden.

Throughout the short, in a voice loaded with fantasy gravitas and inflected with the dark, unsettling tone that pervades the Underdark setting, Cumberbatch reads an accompanying, rhyming poem, penned by R.A. Salvatore, author of the Legend of Drizzt, a 36-volume D&D novel series that began in 1988.

It tells Drizzt’s story more or less from the perspective of the faithful drow Lolth cultists he abandoned to begin his hero’s journey, which – to put it mildly – makes things a bit dark.

It’s beautifully delivered, atmospheric as all hell, and an absolute must-watch for fans of D&D lore. Or Benedict Cumberbatch. Or just really cool voices.

We also saw the Magic: The Gathering card incarnations of Lolth, Spider Queen – a major goddess of the drow, and the favoured deity of the cult into which Drizzt is born – in both standard and borderless editions. Both are terrifying. 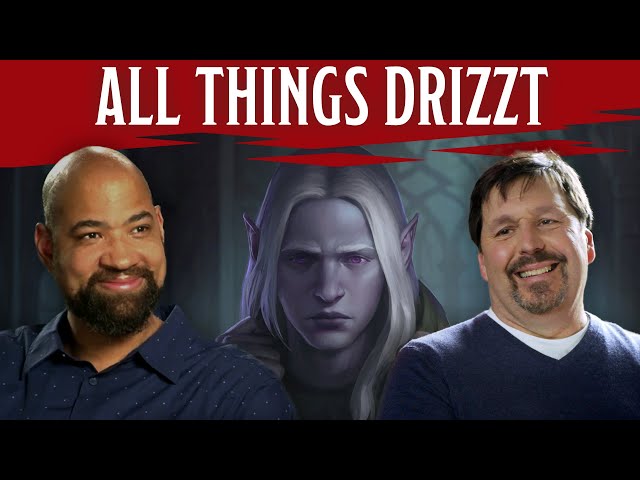 Want to be a stupendously cool sword-swinging Fighter like Drizzt? Start by reading our guide to D&D 5E’s Fighter class – or throw the net a little wider and check out all the D&D 5E classes. Alternatively, if it’s the Magic: The Gathering side of this story that pricked your ears up, why not try your hand at making a MTG Commander deck?