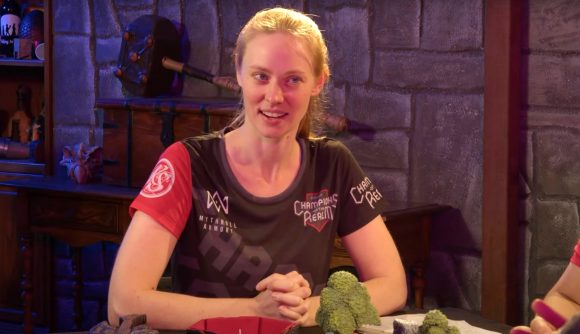 Marvel actor and veteran dungeon master Deborah Ann Woll will host a new Dungeons and Dragons ‘actual play’ series on Twitch, confirms the host of the show’s Twitch channel Demiplane. Demiplane, a company that provides video and voice chat services for tabletop roleplaying groups, announced its next RPG show ‘Children of Éarte’ on Twitter on Tuesday, describing the series as “an ongoing actual play 5e fairy tale from the mind of Deborah Ann Woll”.

Demiplane’s tweet showcases a trailer for the upcoming series (which you can see below) and says “episode zero” of Children of Éarte will be released on Demiplane’s Twitch channel on Tuesday, March 8 at 9pm EST / 2am GMT. From then on, the series will air every Tuesday at the same time.

Woll is best known for her roles as Karen Page in Marvel’s Daredevil series and Jessica Hamby in the hit vampire drama True Blood. However, Children of Éarte isn’t her first appearance in the world of D&D – she was a starring member of Force Grey: Lost City of Omu, a guest in the Critical Role series, and she acted as DM for Geek & Sundry’s 2019 show Relics and Rarities.

Alongside Woll, the actual play (a term for unscripted TTRPG games played to an audience) will reportedly include a slew of other old hands from the world of D&D – D&D Beyond founder Adam Bradford; performer and stunt actor Hope LaVelle; co-author of the D&D adventure collection Candlekeep Mysteries Jennifer Kretchmer; Idle Champions content coordinator Lauren Urban; and cosplayer and performer Alicia Marie. Each has a colourful list of accolades that include dungeon-master-ing, player-character-ing, and content creation for D&D.

Bradford, LaVelle, Kretchmer, and Urban have all played together before as part of Demiplane’s other actual play series, including Heroes of the Plane and Strixhaven Chaos.

On their personal Twitter, Jennifer Kretchmer welcomes Alicia Marie to the team – “she’s a PERFECT fit with our crew, and her play style is so nuanced.” Marie has shared the online space with Deborah Ann Woll before, facing off against her in an episode of Champions on the Realm on D&D’s official YouTube channel.

I’m so thrilled to welcome @AliciaMarieBODY into our crew. I ADORE HER. When I found out she was joining us, my text to her was a series of exclamation marks of glee. We all were so delighted and excited–she’s a PERFECT fit with our crew, and her play style is so nuanced.
3/

For those who aren’t fans of Twitch or can’t catch the live showing, cast member Adam Bradford confirmed in the Twitter thread’s replies that Children of Éarte will also be available as a podcast and on YouTube – though it’s not clear when just yet.

As Children of Éarte airs, we’ll include each episode review here:

Update: This article was updated to include an episode directory on April 27, 2022.