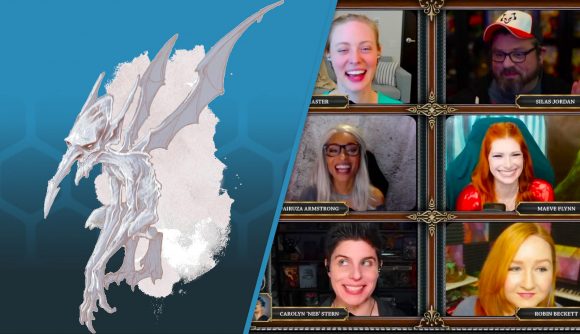 Last week’s episode of D&D actual play series Children of Éarte was titled ‘Enough Blood’, but it’s pretty clear Dungeon Master Deborah Ann Woll did not take the hint. But it’s not all action-packed fight scenes – this week, the party gets some bonding time, as well as their first look at a classic D&D Monster.

If all the cold air has made your brain a little frosty, let us thaw your memories. Last week, the party left the Starlight Special for the first time since entering the flickering, frightening ghost world. They headed into the woods, and they were quickly ambushed by a small pack of hungry wolves. After some intense combat, Neb spoke to the wolves, convincing them to leave the party alone. With plenty of fresh wounds and a sense of wonder at their new magical abilities, the group loaded up on camping gear and set out for Twin Creek Mine.

A more full recap of the series so far (plus plenty of exclusive interviews with Wargamer) is listed in the episode directory below. And you can catch up with the streams at the same Éarte times, on the same Éarte channels – here’s Demiplane’s Twitch channel and YouTube channel.

The Children of Éarte episode directory: 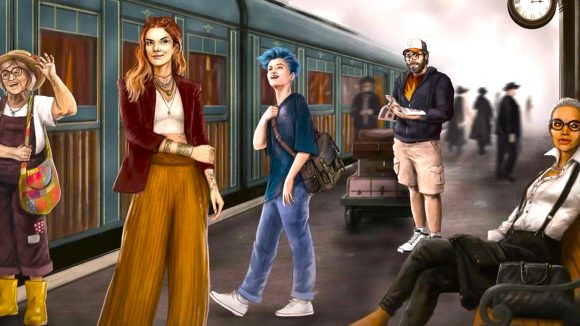 Dusk approaches as the passengers arrive at the mouth of Twin Creek Mine. There aren’t enough tents for everyone to sleep outside comfortably, so the group set up a campfire relatively close to the mine’s entrance. After their fight with the wolves, a moment of peace settles on the group. Maeve Flynn (played by Jennifer Kretchmer) makes a wish upon a star, and Robin Beckett (Hope LaVelle) flicks through a beloved photo album to keep herself grounded.

The group discusses the strange experiences they’ve had so far. Carolyn ‘Neb’ Stern (Lauren Urban) points out that, while the staff on the Starlight Special couldn’t see them, the wolves could, and Robin chooses this time to share what she saw before leaving the train – a man’s soul, lifting out of his body. Someone suggests, perhaps, they’re in the spirit world, but Robin thinks they’re somewhere more ‘in-between’.

In the post-game interview, Deborah Ann Woll said “It’s cool to see a party bond” as they do at the campfire. “There was something in me that wanted to see relative strangers start on a train, and see what experiences it would take for them to open up with each other and trust one another.”

Best in class: Here’s a guide to D&D classes

The chatter then turns to the passengers themselves, with Neb wondering if their passage on the train was more deliberate than it first seemed. Backstories the audience will now be familiar with are shared amongst the players for the first time: Robin’s husband bought her ticket for her years ago; Silas Jordan (Adam Bradford) inherited his from his recently passed grandfather; and Neb got hold of hers in a similar way to Silas. Maeve and Fairuza Armstrong (Alicia Marie) were both sent theirs by (hopefully) living loved ones, but the situation they’re in seems too strange to be a coincidence.

In the post-game interview, Hope LaVelle and Alice Marie both mentioned the impact of Fairuza’s backstory. “Robin is feeling most compelled to know more about Fairuza’s backstory”, said Hope LaVelle. “She’s so interesting, and to learn how she got to where she is is something that really fascinates Robin.” Alicia Marie (Fairuza’s player), also said the campfire conversations made her think “everything has a connection”. “Talking about her social worker [Priscilla Beckett], the last name feels too much of a coincidence given Robin’s character”.

Before turning in for the night, Fairuza plans to shout into the mine’s entrance – just to check no one is there. Neb accompanies her, but takes some unpleasant cold damage due to an existing wound for her trouble. They see some sort of mechanism at the back of the cave – but are soon distracted by a cold nail dragging across Neb’s face. An icicle comes to life, and those who have a Monster Manual to hand will recognise this creature as an Ice Mephit. Once again, we roll initiative. 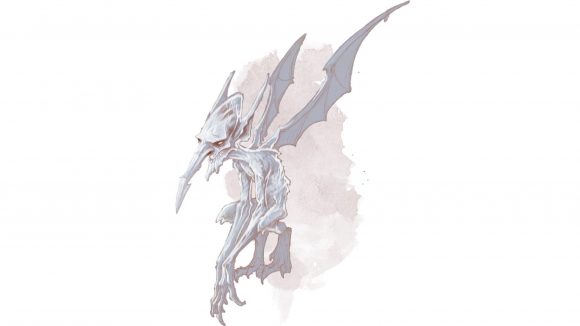 Three Ice Mephits descend upon Neb and Fairuza, slashing and breathing blasts of cold air over them. It’s not long before Neb falls to the ground, and has to once again deal with death saving throws (this might be the fourth time Neb has been at death’s door so far, Deborah Ann Woll says).

Hearing screams, Maeve uses her favourite weapon, the word ‘no’, to deal one point of force damage to a Mephit. Silas grabs a burning piece of wood from the campfire, and he uses it to wave the Ice Mephits away from the now-unconscious Neb. Meanwhile, Fairuza starts bludgeoning a Mephit with her axe, partly shattering it as she does so.

Robin grabs a knitting needle from her bag and heats it in the fire. She rushes forward and stabs it into a Mephit. It’s Maeve who takes out the first Mephit with some retaliation damage, and she uses some of its fading life essence to heal her wounds – which is helpful, as these things explode into huge shards of ice when they die.

With two Mephits left, Maeve, Silas, and Fairuza all leap onto Neb to shield her from another blast of ice. One Mephit takes the chance to claw Silas’ exposed back – dealing critical damage, and knocking Silas unconscious too. Maeve performs a medicine check to stabilise Neb, and Silas (luckily) stabilises straight away after seeing visions of a fox. Neb, meanwhile, has been dreaming of her grandfather, who says “Neb, you must always remember to check all paths”.

Make your own: Here’s some tips for a D&D homebrew

Fairuza slings Neb over her shoulder and sprints away from the fight. A Mephit attempts to intercept, but it falls prone (nice critical failure, Mephit). Robin manages to shoot lightning from her fingertips, pulling a Mephit closer to her and dealing some serious damage.

Silas doles out some Bardic Inspiration for Robin before he and Maeve disengage and head toward the campfire. Maeve’s player Jennifer Kretchmer told Wargamer Maeve was “grateful that we were able to retreat a bit – Maeve sees value in the idea that sometimes when you can’t take a thing on, you should get away”. Meanwhile, Adam Bradford said Silas was absolutely “geeking out” about everyone’s magical abilities here. “Like he is a fan of so many other things, he’s become a fan in a very short amount of time of the other people that are with him on this strange and weird journey.”

Fairuza swings her axe, golf style, at a Mephit attacking Robin – shattering it as it flies into space. Interestingly, her axe grows half an inch, but Fairuza doesn’t notice. Robin heals Neb with a medicine check, and the remaining Mephit begins to flee. To bring the final monster down, Maeve and Silas hurl force and psychic damage at it, and Neb even throws a well-intentioned (but unsuccessful) fireball. Speaking about her character Neb, Lauren Urban said “at the end, [Neb] was really thinking about how she needs to be ‘not the squishy one’, and she’ll probably see what she can explore with that”.

Alicia Marie praised Neb’s determination, despite her ‘squishiness’, in the post-game interview. “Even though Neb is a front line warrior as squishy as squishy can be, there’s got to be a part of you that admires Neb.” She also explained the impact this fight had on Fairuza: “She’s so used to doing things on her own, but she’s realising she can’t continue to fight everything bad in this world on her own – maybe it’s time to let people in.”

“Even though it’s only been a day, she’s feeling very close with these people who might have saved her life, and she wants to save them too”, Marie added. “Those monsters, they are not normal creatures, and we are not in a normal life.”

Update: The episode directory was updated May 18.