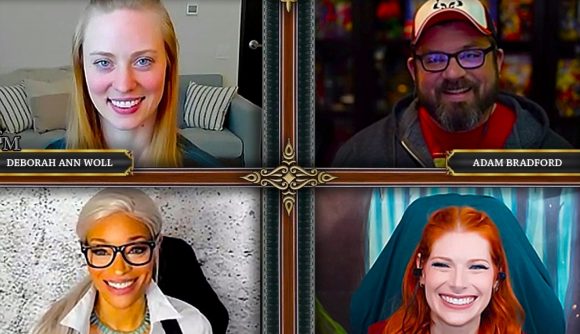 Ever wanted to run a D&D game like the actual play series Children of Éarte? In this week’s post-episode discussion with Wargamer, Dungeon Master Deborah Ann Woll has some advice – when creating exciting and encouraging plot hooks, ensure “any hook you place has five different pieces of bait”. “You want to create as many reasons to follow the hook – treasure, power, heroism, saving one’s self – so any player, whatever they’re playing, is genuinely driven to follow the hook”, Woll says.

This week, we see the result of Woll’s plotting bear fruit. We also see plenty of corrosive substances. Before we get into the episode nine recap and interview, however, cast your mind back to last week’s stream. The party discovered even more of their magical abilities, and they’ve found the steam engine they need to operate the mine’s lift in a little house – sat on top of a huge supply of cyanide.

A more detailed recap of the series so far is included in our episode directory below, as well as on Demiplane’s Twitch channel and YouTube channel.

The Children of Éarte episode directory: 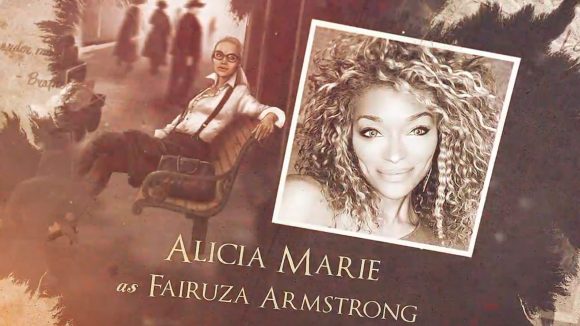 With her second phone duct-taped to a piece of rope, Fairuza Armstrong (played by Alicia Marie) is ready to send it down the lift cable shaft. The shaft seems to narrow as the phone is lowered into the darkness, and it gets stuck after around 45 feet.

Carolyn ‘Neb’ Stern (Lauren Urban) suggests starting up the steam engine and lifting the phone up, and Silas Jordan (Adam Bradford) thinks perhaps they should just use the ‘front door’ of the cave instead. But, in the end, Robin Beckett (Hope LaVelle) uses her experience as a fishing instructor and her friends’ support to carefully retrieve the phone and rope.

Both are coated in a black goo that deals a nasty bit of acid damage. While Robin cools her burning hands in the snow, Neb hastily tries to wipe the acid away from the smartphone with a spare sock – taking damage of her own in the process. The phone is eventually saved, and the party sees video footage of plenty more icky ichor in the shaft.

The group decides to experiment with the goo (which fans of tabletop RPGs will identify as the classic D&D Monster Black Pudding). Robin throws a tin into the goo, and it dissolves slightly slower than the stick Maeve Flynn (Jennifer Kretchmer) pokes it with.

Play your way: These are the best DnD campaigns

Neb manages to create a fireball with her fist (another exciting new power), and throwing it splits the Black Pudding into several smaller versions of itself. Another fireball seems to eliminate one of the smaller goo piles, at least.

Maeve suddenly realises a worm-shaped pile of goo that was lifted out of the shaft on Silas’ rope has gone missing. Neb continues to experiment with eliminating ichor, but Maeve and Robin rush outside to search for the missing-in-action mass. Spotting several animal tunnels in the ground, Robin declares their pursuit a lost cause.

Someone proposes pouring cyanide crystals down the shaft to take out the remaining goo, and Neb has one creature left they can test the plan on. Donning heavy leather gloves and a makeshift scarf mask, Robin pours a few grains over the goo.

It bubbles, but it doesn’t seem to react. At least, until Neb throws another fireball – when it pops in a yellow cloud of gas. 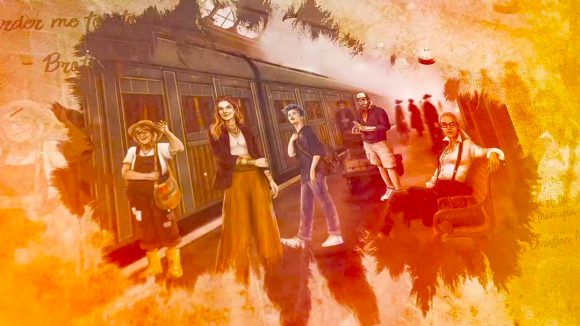 No going back now

The party starts to wonder if keeping the engine operating the lift running is too tall a task – and one that will split the party. Instead, Maeve and Neb use fire and a blade to sever the lift cables. There’s a huge crash, and everyone realises there’s no going back now.

Hope LaVelle tells Wargamer this was “the most eye-opening moment for Robin this episode”. “It was one of those moments where there’s no going back on this decision – we have to live with this when we don’t really know what we’re getting into.”

Meanwhile, Jennifer Kretchmer says Maeve is prepared to press on – perhaps without considering the consequences. “For her, going back isn’t the way anything operates”, Kretchmer says in the post-game interview. “You don’t go back to the things you’ve done, you keep moving forward – and that’s the exciting thing.”

Set the scene: A guide to DnD settings

Silas reminds everyone why they’re here (to find the first mirror shard for Ivy), and everyone suddenly considers what they’ve left behind at home. “For Fairuza, a moment that hit her was when Neb said ‘what if we never go home?’”, Alicia Marie tells Wargamer. “It immediately changed how Fairuza saw this situation – now she wants to get through this and get home.” “She has a meeting on Monday”, Marie adds, “and it’s really important!”

Lauren Urban says Neb had a very different reaction to Fairuza. “This is amazing, and she’s ready to go all-in on staying here forever and finding out more about her powers and this world”, Urban says. Silas feels the same – after all, he just cast Mage Hand for the first time. “People probably thought he enjoyed his life, but he was not satisfied or content with it,” Adam Bradford tells Wargamer, “so this is the most satisfaction he’s got for a long time.” “If there is a way to stay in this place, he’s gonna chase what it means to stay.”

Packing up their kit and a small box of cyanide, the party head towards the mouth of the cave. Neb and Fairuza can feel a storm coming, and they’ll need somewhere to weather out the, er, weather, before the party goes spelunking tomorrow.