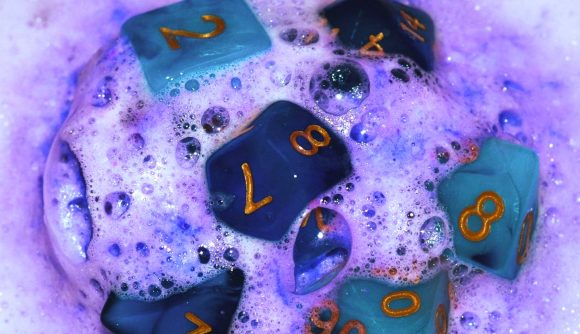 Critical Role is everywhere nowadays. The D&D actual play web series has introduced countless would-be adventurers to the tabletop RPG, and has become a staple of the hobby space. It’s made itself home in our podcast playlists, entered official D&D lore, but now it could be making waves on a new frontier: our bathrooms.

At least, that’s what a line of peculiar, hilarious, and outright endearing bath bombs from bathroom cosmetics company Geeky Clean might mean. Its Mighty Dice Bomb collection contains polyhedral bath bombs each inspired in fragrance and colour by a character from Critical Role, and, for extra D&D flair, contains a full set of RPG dice embedded within them. So, while you’re soaking in the tub, absorbing moisturising fragrances, and listening to the dulcet tones of Matthew Mercer, you can also be rolling for initiative, or calculating a percentile.

“I try to theme them all around the characters in a way that makes sense,” says Dodd.

“People have just gone, ‘Oh this looks cool; this is a character that I like’, but for me, deep down I think, there’s a reason the Beau [Beauregard Lionett, a Critical Role character played by Marisha Ray] bath bomb is a muscle relaxant and muscle therapy based bath bomb. Because she’s a monk, she does lots of exercise, and needs to relax at the end of the day.” 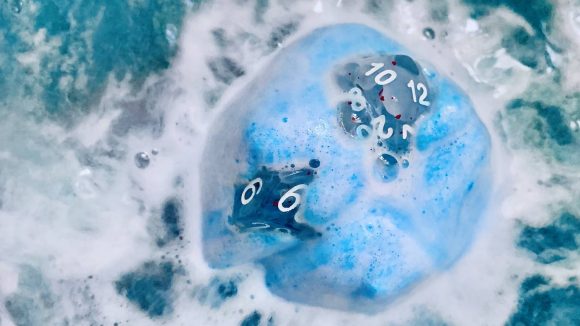 “No one really needs to know that kind of thing, but that’s how much I’ve been thinking about them, and plotting the character scent, and the dice behind it. Her dice are a blue jade themed dice, because it fits with that cultural side of things.”

Similarly, the bath bomb themed around by Critical Role’s tiefling blood hunter Mollymauk Tealeaf (played by Tliesin Jaffe) is scented with orange and patchouli; designed as a “positively regal bath bomb” and a “perfect homage to the great showman”. While the bath bomb themed after Yahs Nydoorin (an aasimar barbarian played by Ashley Johnson) is scented with Lavender and Chamomile to “capture her love of flowers along with her stint in the circus.” 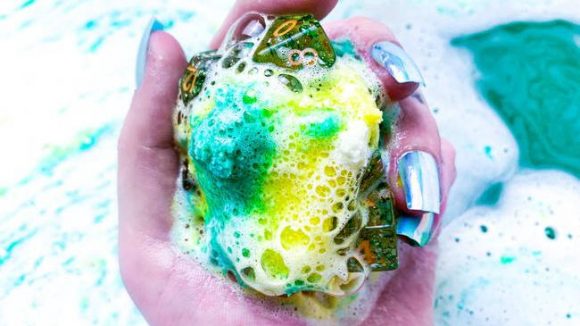 “The bath bombs and soap we already did, and had various different themes around anime, and videogames. And then we got into Critical Role,” she adds.

“At the time, they didn’t do dice sets themed around the characters, so I thought, ‘right, I’m going to think of a scent that reminds me of that character, and pick a dice set that I think they would use, and mash them together’. And that’s what inspired the Mighty Dice Bomb collection.” 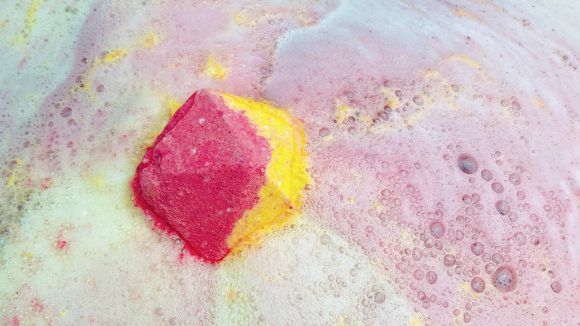 The company has since branched out into ‘blind’ dice bath bombs, that aren’t themed to specific characters and contain a random collection of dice.

“A lot of people have messaged us to say, ‘I’ve got this coloured dice, and that’s got me to make a rogue or whatever class.’” Dodd says.

“It’s really nice to see that people have been inspired by them,” she adds. 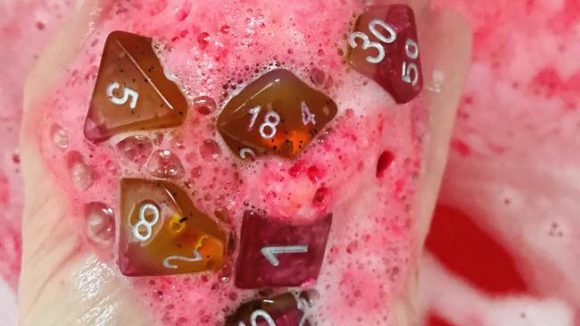 And as for getting the dice into the bath bombs, Dodd says that’s “not rocket science”: she makes a pocket in the middle of the bath bomb and “shmooshes” them inside. Simple stuff. But they’re also made to be cruelty free, vegan, and use single-use plastics.

Looking to the future, Dodd says she’d like to produce a new set of bath bombs based on each D&D class, and is hoping to launch a Kickstarter this summer to fund the upfront costs.

If you can’t wait until then to expand your dice collection, read our guide to the best D&D dice sets, and start rolling.