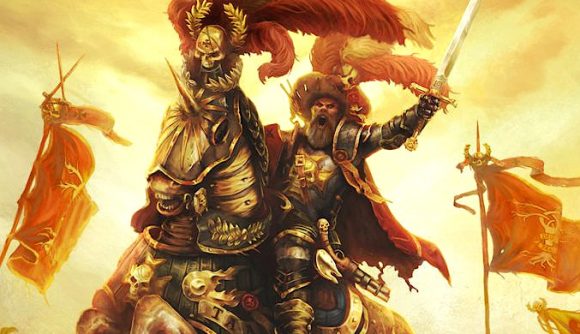 22/07/21 This story has been updated with exclusive commentary from the game’s publisher, Cubicle 7

Elector Counts will see two to four players fight for control of the Empire following the death of its imperial ruler. With the lineage unclear and diplomacy cast aside, you’ll take the role of nobility, and muster a force capable of taking control of the Empire’s provinces, eventually claiming Sigmar’s throne for yourself.

During a match, players will use cards of three varieties – attackers, defenders, and support units – to protect their ‘location cards’  from enemy assaults, while attacking those of their opponents. Successfully defend your locations by the game’s end, and they’ll earn you some victory points. Players draw from a common deck, and spend their turn playing all cards in their hand until they’re down to only three, before passing the remaining cards to their adjacent player.

Speaking to Wargamer, Pádraig Murphy, producer for Warhammer Fantasy Roleplay, described the card game as “a nice balance of attacking other players, defending your own holdings, and being careful about which cards you don’t play as much as those which you do.”

“You could easily be passing a useful card to an opponent at the end of your turn. In that way it captures a little bit of the drafting gameplay that is a part of some CCG games,” he added.

The cards span many familiar faces of the Empire, including Grand Marshal of the Reiksguard Knights Kurt Helborg, famed hunter Markus Wulfhart, dwarf Slayers, a Flagellant mob, and other recognisable units. Some of the game’s character cards feature older artwork created during the days of Warhammer Fantasy Battle, while some will appear with new illustrations.

Elector Counts also includes some famous locations from Warhammer’s Old World, many of which have cropped up in the Warhammer Fantasy Roleplay game before, such as Middenheim or the banks of the Stir river. 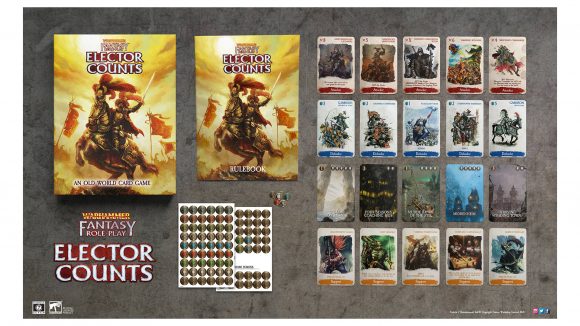 Murphy says games of Elector Counts will last about 40 minutes, and the variety of strategies – whether you focus on attacking or defending; hold cards for the late game or splurge early – introduces an element of replayability.

“I’m excited to have a tabletop Warhammer Fantasy game coming out!” Murphy says.

“RPGs are not to everyone’s taste, but there are plenty of Warhammer Fantasy fans out there who might enjoy having something like Elector Counts to tide them over until The Old World lands (square bases!),” he adds.

Warhammer Fantay’s Old World setting initially met its demise in 2015 when Games Workshop shelved the setting, destroyed it in the game’s lore, and birthed its replacement Warhammer fantasy miniatures game Age of Sigmar.

Since then, Games Workshop has announced the resurrection of the setting in the form of Warhammer: The Old World. The new tabletop game is set in the original Warhammer fantasy world, and will reintroduce many of the classic features of Warhammer Fantasy Battle, including older factions, familiar settings, regimental unit movement, square bases, and other gameplay elements.

Elector Counts is available to pre-order directly from the Cubicle 7’s webstore for $ 37.30 / £27.90, and is scheduled to launch in the fourth quarter of this year, before an aimed retail release in December 2021 or January 2022.

Check out our comprehensive guide to Warhammer: The Old World for the latest details on the game’s release date, races, map, and more. Or, read our pick of the best trading card games, if you’re in a drafting mood.