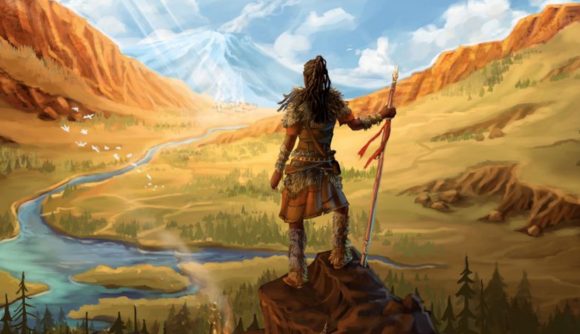 The designer of acclaimed tile game Carcassonne has a new board game on the way, that’ll take you back to the stone age as a tribal leader. Titled Fire & Stone, Klaus-Jürgen Wrede’s upcoming adventure game will have you explore new lands, gather resources, and build settlements across a primeval map. Published by Pegasus Spiele, it’s scheduled to release in October this year, according to a BoardGameGeek listing page that appeared yesterday.

Unlike Carcassonne’s tile-placing system, Fire and Stone is played on a central map split into distinct regions. Playable between two to four players, you’ll be sending scouts to explore the unknown world beyond your village, revealing hidden tokens to trigger their effects and unlock new power to use on future turns.

As you uncover pathways across the map, you’ll be searching for food, leather, and other resources to combine into advanced technologies to help you endure life as a hunter-gatherer, such as boats, transport sledges, and bows and arrows. Like all good prehistoric peoples, you’ll also be able to develop advanced skills like fire and pottery to progress your civilisation, accelerating the growth of your tribe, and building new villages to earn victory points. 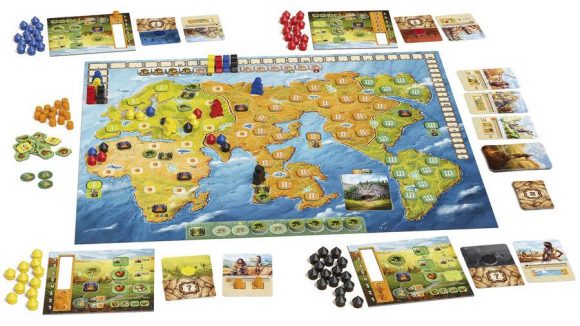 Check out the full rules here.

Set at the dawn of humankind, the game’s map doesn’t show the world’s geography as we recognise it today but depicts a prehistoric Pangaea, in which all the continents are fused together into one central landmass.

This isn’t the first time Klaus-Jürgen Wrede hasn’t dabbled in the primordial. His 2002 spin-off game Carcassonne: Hunters and Gatherers moved the series’ core mechanics into a prehistoric theme. Challenging you to connect streams, forests, and meadows, the game introduced a couple of new features, too, such as fishing huts to place on rivers and lakes, and gold nuggets to find in forests. An updated edition was released in 2020.

Fire & Stone has an estimated playtime of 45 to 60 minutes, and is scheduled to release in October this year. The game’s price has not yet been revealed.

Looking for more classic games to play? Read our pick of the best board games available in 2021, or look through our list of the best Catan expansions, if you’re interested in classic titles.